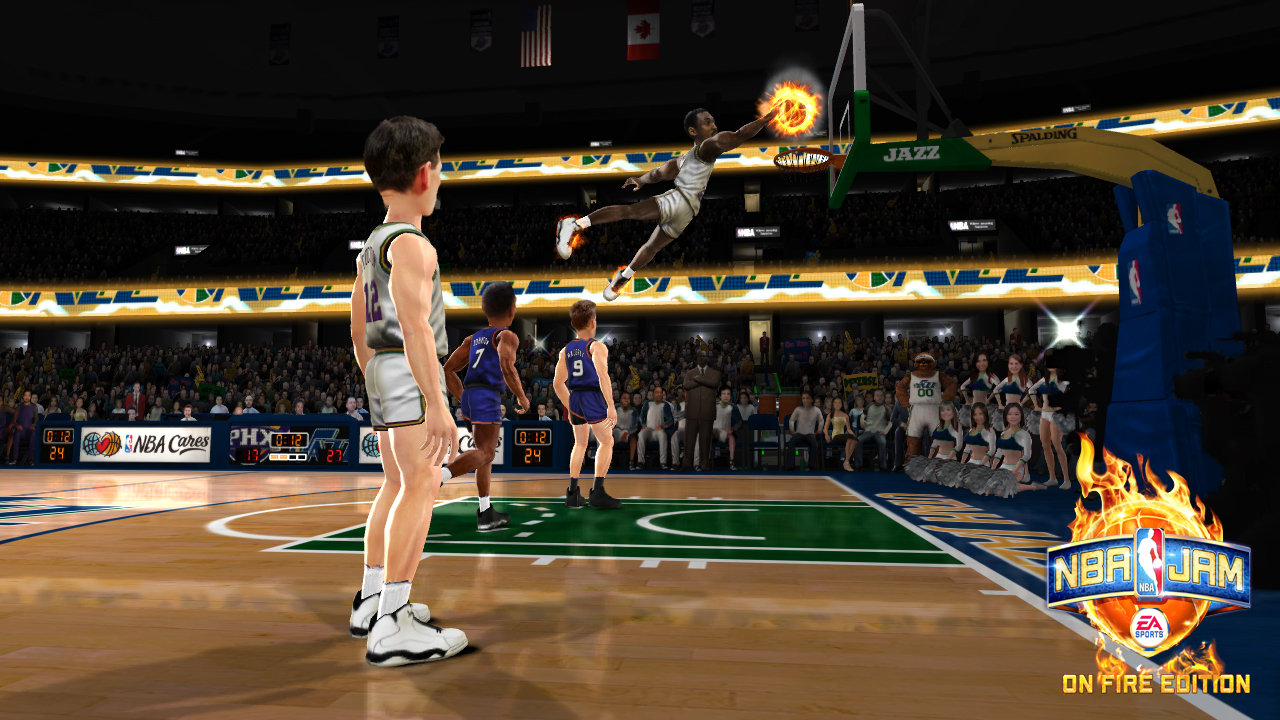 I remember back in ’93 when my friend got NBA Jam for the Sega Mega Drive – my God, the excitement that news caused. Honestly, I’d say it was up there with the release of Street Fighter II on the SNES as far as sheer anticipation was concerned. Within moments of the news going out, myself and a group of 3 other friends had laid siege to his house in order to get a glimpse of, what was back then, the very height of home entertainment. Now, in 2010, I was amazed by how similar a response my review copy of NBA Jam on the 360 has had. Ok, not everyone, with their busy lives and full-time jobs, could come running around at a moments notice, but pretty much all my friends, many of whom never play videogames anymore, were surprisingly keen to see how EA’s update had fared.

The good news for them, myself and the many, many gamers with extremely fond memories of the original are that EA Sports Canada has done a great job with the NBA Jam remake. The bad news is that they’re charging £30 for it. In fairness, NBA Jam is a lot more fun than a lot of the full priced retail releases currently adorning the shelves of your local Game, but the fact is, due to its inherently simplistic gameplay, NBA Jam feels and looks like a game that belongs on Xbox Live Arcade.

Originally planned as a packaged extra on the now-cancelled NBA Elite 11, the NBA Jam experience found on disc has inevitably been padded out in an attempt to justify its cost. Essentially the Wii version with the addition of online play and HD graphics, NBA Jam is just about worth the price of admission if you’re a fan of the original or are likely to spend the majority of your time playing it with friends. If, however, you weren’t too keen on the original or are planning on playing this solo, then really, I wouldn’t bother. Sure there are 5 game modes and online play, but playing NBA Jam without a friend sitting next to you feels like a strangely hollow experience.

Still based on the same simplistic, fast-paced 2-on-2 action that made the original such a hit, it’s actually somewhat surprising just how faithful EA has been to the ’93 original. There are a few subtly implemented moves, but for the most part, this is an extremely similar experience (bad AI and all). There are still no rules – pushes and shoves are all fair game here, gameplay is as fast, slick and responsive and, as ever, the dunks are still very much the stars of the show. Sure you can shoot, but unless you’re looking for 3 points, chances are you’ll be driving the lane for the big dunk or throwing up an outrageous alley-oop. 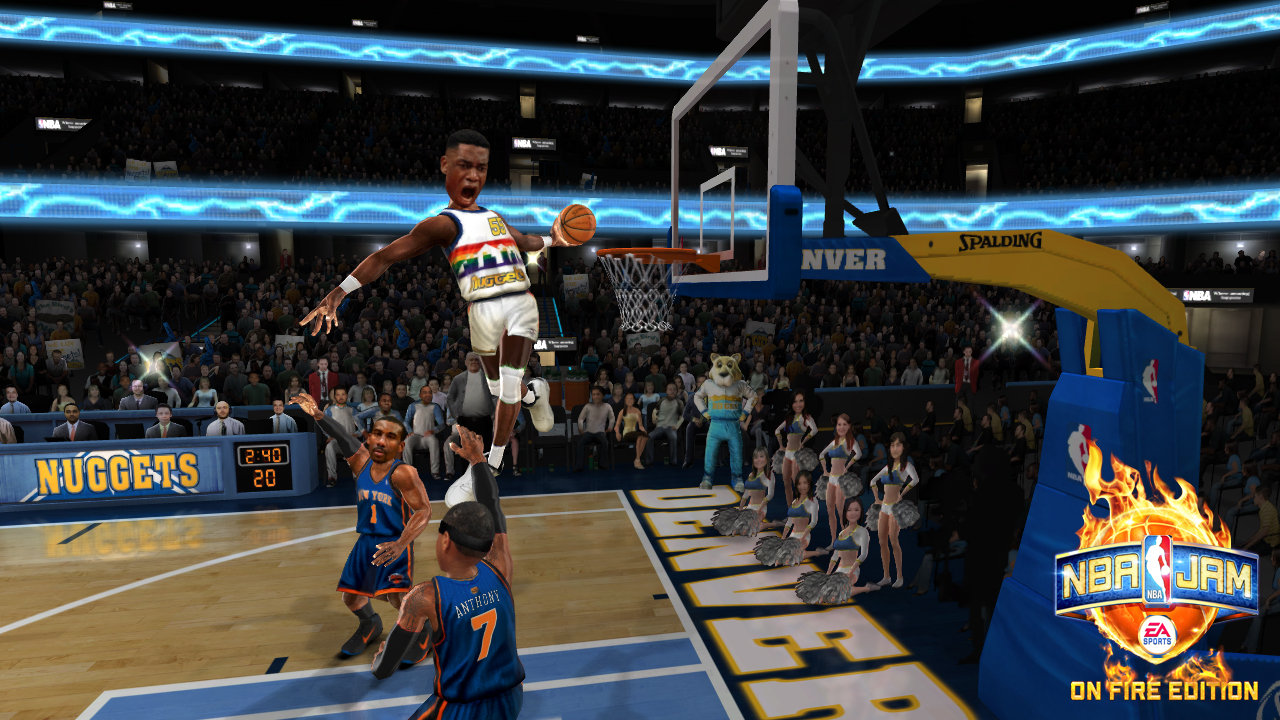 Fans of the series will also be glad to hear that, presentation-wise, EA has managed to find a middle ground between looking modern and up-to-date without sacrificing the OTT aesthetic style of the original. All the players are now modelled in 3D, allowing for smoother animations and a more modernised look, while their faces, which look like cardboard cut outs with a selection of expressions, really do a great job of capturing the arcade spirit of the NBA Jam series. Sure, a lot of the players look like Mel Gibson in South Park, but some of the exaggerated expressions are genuinely funny and do a great job of bringing NBA Jam up-to-date while still delivering a pleasing nod to its forbearers.

One of EA Sports’ other major boons is that they’ve managed to get the original commentator, Tim Kitrow on board for the remake. It’s amazing how, even 17 years after its original release, many of the phrases made famous by NBA Jam and Tim Kitrow’s fantastic commentary are still so fresh in the memory – “He’s on Fire”, “Is it the shoes?” and the always entertaining “boomshakalaka” are all present and accounted for. While these nuggets of commentatorial gold are still delivered with the same vigour as in the original, it’s still nice to hear some new lines thrown in for good measure. Some additional, yet still somewhat ridiculous general play commentary, has also been added that, like so much of the NBA Jam package, manages to make the game feel pleasingly familiar and new all at the same time. As great as the commentary is though, the less said about the single audio track the better. It may not be particularly horrible, but it’s repeated ad-nauseam and will eventually start to grind the gears of even the most forgiving of gamers.

Although the game’s mix of classic gameplay and modern aesthetics would be enough to get NBA Jam by if it were an XBLA release, given that it’s being sold as a full retail product has meant that EA have had to work pretty hard at making the package more appealing. While the smooth running and ultimately enjoyable online mode does go some way towards sweetening the deal, it’s down to NBA Jam’s 5 game modes to sell it as a potentially robust experience.

The basic Campaign Mode is a string of matches aimed towards winning the NBA Championship. It’s based on the original set-up and is painfully simplistic. Many gamers will stick through it thanks to NBA Jam’s wealth of unlockables (team of US Presidents anyone?) but this mode is little more than a selection of exhibition matches. 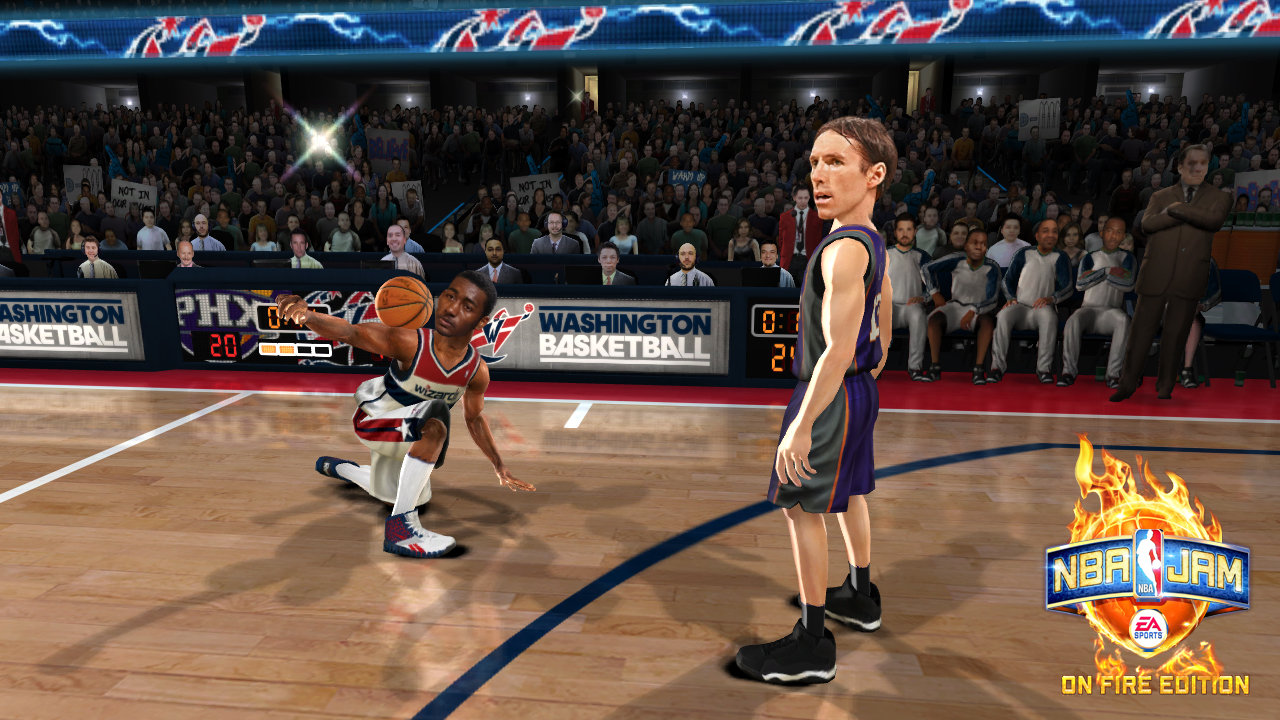 Sadly, the same is largely true of both the Remix Tour and Remix Mode. Remix Mode adds a collection of power-ups to the basic gameplay such as added accuracy and speed, while Remix Tour has you playing every team in the country along with a few boss battles thrown in for good measure. While they work well enough, neither does enough to sufficiently distinguish itself from the basic Career Mode and subsequently feel more like box ticking exercises rather than truly worthwhile additions to the package.

Smash and Domination, however, prove much more successful by delivering unique, wholly enjoyable twists to the core gameplay. Smash in particular can be an absolute riot played with a group of friends – putting an even stronger emphasis on the game’s fantastically sensational dunks, Smash charges you to bring down your opponent’s backboard via an array of slam dunks and alley-oops. It’s a simple premise but it plays to the game’s strengths and encourages a pleasingly aggressive style of play.

Domination, on the other hand, takes the emphasis away from dunking with each player aiming to ‘own’ the entire court by making shots. This creates a unique tug-of-war battle and provides a unique change of pace from the usually more dunk-centric gameplay.

Despite the relatively high asking price, EA Sports Canada has a done a great job of bringing NBA Jam up to date while remaining true to the original’s pick up and play mentality. If you have fond memories of the original then there is more than enough nostalgia-fuelled gameplay here to make it worth the £30 asking price. The additional game modes and HD makeover may not be enough to win over the doubters but for those looking for a bit of classic arcade gameplay, NBA Jam still delivers the goods.