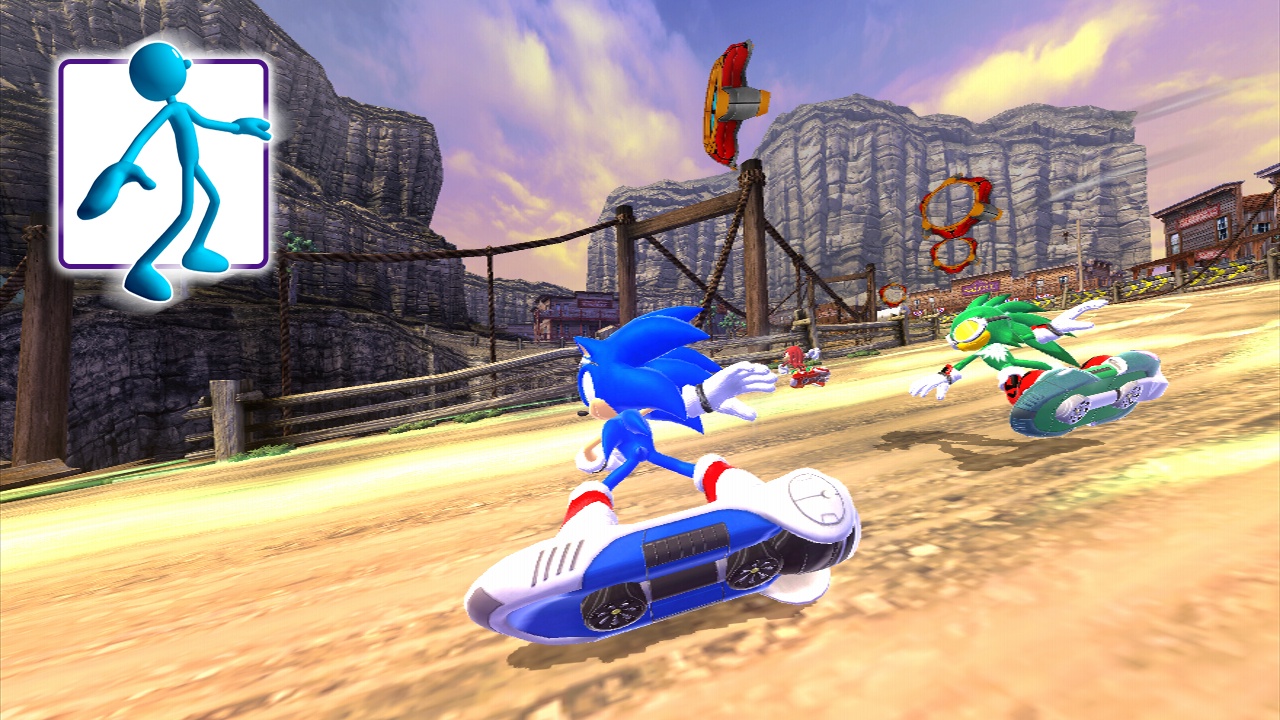 2010 has been a good year for Sonic. First, there was the surprisingly decent Sonic & Sega All-Stars Racing, which was followed by a return to the series roots in the excellent Sonic the Hedgehog 4: Episode 1 and the truly outstanding Sonic Colours for the Nintendo Wii. Could Sonic Free Riders keep the run going and cap off an excellent year for the blue blur? Er, no actually.

Well, I say no, but the fact is, Sonic Free Riders is actually a pretty decent game. The tracks are colourful and imaginative, the unique upgrade system gives the game a tactical element lacking from many racers of its ilk and the multiple routes give the whole experience a pleasing sense of longevity and re-playability. The problem is, all of this quality is buried beneath a control scheme that simply put, doesn’t work. Of all the Kinect launch titles, Sonic Free Riders is the least responsive and without question, the most infuriating.

In fairness to Sega, they have attempted to mask the game’s failings with boost corners that take away the need for sharp turns and wide tracks that limit potential error, but the fact is, on a basic level, Free Riders fails as a Kinect-only title. It’s a shame too because if this game had the option for a traditional control method it would easily be the finest game in the admittedly underwhelming Sonic Riders series.

Standing side onto the screen as if you were riding a skateboard (or pretending to ride a hoverboard a la Back to the Future II), turning is achieved by leaning forward and backward while keeping your feet firmly planted on the floor. While the control method works fine, in theory, the game’s inability to read subtle movements makes cornering (the most important facet of any racing game) a complete chore. Many subtle movements are not registered while exaggerated movement will often see you careening uncontrollably into a wall – there is simply no consistency. Even with the aforementioned boost corners and some smart level design doing their very best to mask the problem, this lack of consistency makes far too much of the game feel like it is controlled by chance rather than skill. In fairness, kicking out your leg for speed boosts works a charm, but then, a racer that only really works when you’re going in a straight line isn’t much of a racer at all……unless it’s drag racing I guess.

Sadly, even straight lines are a problem in Sonic Free Riders. The game’s many gesture-based skills and attacks, while again all theoretically enjoyable, are all too often hampered by the games technical limitations. Be it one of the many outrageous jumps, attacks or dodges, the delay between your movements and what happens on screens makes much of the game unplayable, thanks in part to its inherently fast pace. Jumps, which are performed, surprisingly enough, by jumping have a good second or two delay. Once you start to learn the tracks and take into account the delay, this can be worked around – it’s just not something that should have to be done and it steals away any potential immediacy the game would have possessed otherwise. The same is true of ducking and dodging. Sure you can plan ahead but, a) that defeats the point of a game that is aiming for immediate accessibility and b) if you’re being attacked, then planning goes out of the window….along with any chance of you getting out the way. 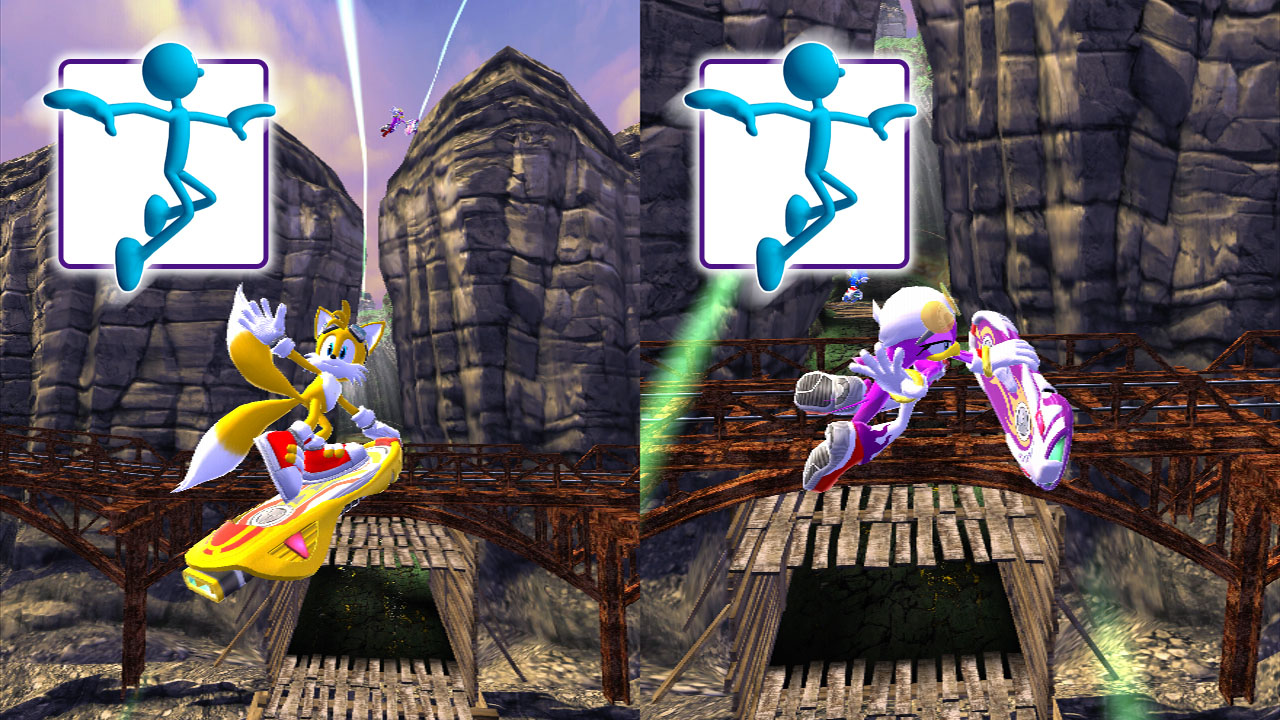 Admittedly, weapon use does fare a little better once you get used to the unique movements required – using actual bowling motions and American football style throws – taking out friends and AI alike via the games imaginative selection of weaponry proves consistently enjoyable. The same goes for the manual coin collection which can be handled by holding your arm out to pluck them off the track. The problem is, unless you have acres of space, trying do so with a friend playing next to you can quickly descend into something of a violent affair. Still, this is an optional extra with traditional coin pickup also available, which considering the games leveling up system is something of a relief.

By picking up rings as you race not only do you get the option to use them for unlocking all new boards and gear but they also have the added benefit of leveling up your racer as you progress through the event. If you manage to pick up rings without crashing, your board will gradually pick up more speed as you level up. Subsequently, if you do hit a wall or an obstacle you will eventually be leveled down. This provides races with an additional risk/reward element that, despite the control issues, proves a welcome tactical addition.

The fact is, if you do manage to learn the tracks and live with the unresponsive controls then there really is a lot to like about Sonic Free Riders. The Grand Prix is where you will spend the most of your time when playing solo and it does a great job of easing you into the experience. By playing as a specific racing team, you get the chance to partake in a set of unique challenges that task you with using all the skills available to that character. There are, of course, traditional races to be had, but it’s nice to be encouraged to try new things and see all that each course and character has to offer.

Beyond being encouraged via the games many incentives, it’s worth replaying events and courses just for the fantastic level design alone. With Sega’s bold colour scheme, an array of multiple routes and some impressive visuals and spectacle throughout, each of the games 16 tracks prove to be both aesthetic and creative successes.

To get the most out of each track, not only are you going to have to master the routes, but you’re also going to have to master the gears. Gears, which are unlocked as you progress through the game, provide unique skills for your rider and can be attached to both ends of your board. An attached gear’s ability is activated by having the board faced in the direction that the specific gear is attached. Each gear has a unique power and, depending on what route you wish to take, needs to be picked carefully before each event – be it grinding, gliding, super jumps or shield power-ups, the more you know about the track, the more tactical the decision becomes. 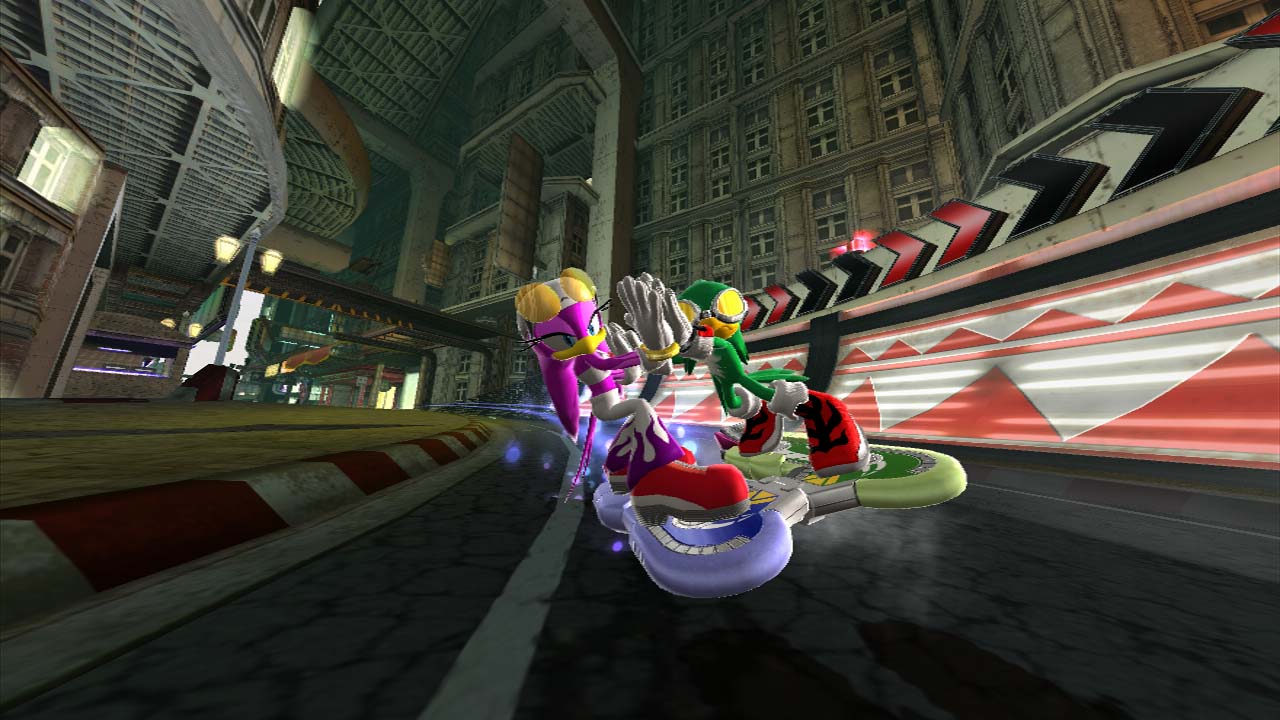 The potential benefits of a wisely chosen set of gears is never more apparent than when playing online or against friends. If you’re looking to seriously compete, not only are you going to have to know the courses inside out but you’re also going to need to utilize each gear’s ability and learn the best gears for each track. The online events run smoothly and prove surprisingly competitive, while local play is inevitably affected by how much space you have and how much patience that you and your friends/family have for the controls. Local co-op is a strange beast in that it requires you and another player to stand face on with your palms pushed against each other. It’s a strange and highly challenging mode that requires you to both work in tandem to get through a race successfully. Sure it’s a fun little novelty if you’re playing with your girlfriend, but if it’s with your best mate after a couple of beers then yeah, it can be a tad awkward.

There is fun to be had in Sonic Free Riders, especially if you take the time to learn the courses and work around the game’s ‘nuances’, but the fact of the matter is, the controls really do spoil what could have been a very solid racing game. Sonic Free Riders is a Kinect launch title and I’m sure it was intended to be an experience that could be enjoyed by all types of gamers. Sadly, unless you’re willing to put in the man hours, Sonic Free Riders rarely delivers much more than an infuriating, unresponsive experience that manages to highlight all of Kinect’s potential weaknesses and none of its potential strengths.