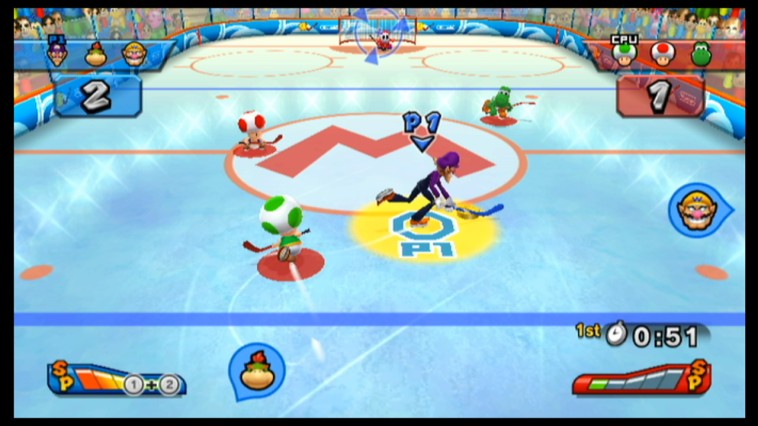 I tell you what, Mario and his cohorts sure are an athletic bunch. Over the years, the guys and gals of the Mushroom Kingdom have proved themselves more than proficient at football (soccer to our friends on the other side of the Atlantic), baseball, tennis and pretty much every Olympic event going. As if to prove a point, they’re now adding hockey, dodgeball and volleyball to their repertoire of talents. Oh, and just in case you had any doubts regarding their basketball skills, well, they’re getting back on the court too.

Mario Sports Mix sees a return to the Mushroom Kingdom for the good folk at Square Enix who previously released the decidedly ‘meh’ Mario Hoops 3-on-3 for the DS back in 2007. While it certainly wasn’t a bad game, Square Enix’s take on Mario-themed basketball was little too simplistic for its own good and failed to keep gamers entertained in the long run. Sadly, it seems Square Enix didn’t learn their lesson as Mario Sports Mix, while inevitably a more robust package, suffers from the same major issue that marred their previous effort.

Like Mario Hoops 3-on-3, Mario Sports Mix is a visually stunning package, filled to the brim with the kind of charm and character we have all come to expect from a Mario title. It’s also, much like the DS release, very easy to pick up and immediately quite satisfying to play. Problem is, Mario Sports Mix also suffers from the same major flaw as its DS predecessor – it has absolutely no depth. While we’re hardly expecting Pro Evo levels of tactical nuance here, the level of simplicity on display in all four games does mean that the fun, especially in single player, can often be quite short lived.

Previous Mario sport releases such as Mario Strikers Charged and Mario Golf succeeded thanks to their pleasing balancing act between being immediately accessible and surprisingly in-depth. While a group of friends could pick up either game and get straight into the action, both games proved deceptively versatile for gamers looking to take the experience on to the next level. 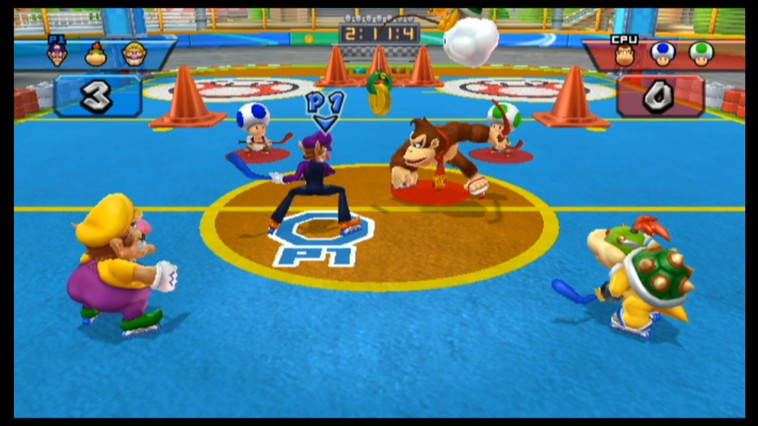 So yes, while Mario Sports Mix would seem to have all the hallmarks of a successful Mario Sports title on the surface, dig a little deeper and you’ll find a selection of games that provide little more than fleeting entertainment. In fairness, as a party games played with a group of friends, both hockey and basketball do prove very entertaining in short bursts, but even these, by far and away the strongest games in the package, struggle to hold the attention when played for an extended period of time.

Of the four games on offer, it’s probably hockey that will provide both the greatest longevity and the greatest deal of immediate entertainment. Benefiting from the fact that hockey games in general haven’t changed a great deal since NHL ‘94 back on the Sega Megadrive, Mario Sports Mix’s take on the sport probably does the best job of catering to the casual and hardcore players out there. Not playing all that dissimilarly at a core level to the NHL’s and 2K’s of this world, Mario hockey boasts all the hallmarks of the actual sport with check’s, spins and speed boosts all par for the course.

Playing with either 2 or 3 per team (as is the case with all events), even without the themed courses and traditional Mario power-ups, hockey is still a solid enough experience to be enjoyed as a simple arcade-style hockey game. In fact, surprisingly enough, playing hockey in just that manner can often be the best way to experience it. Don’t get me wrong, the shell power-ups and coin-powered super shots are all good fun, but some of the courses, such as the visually brilliant but occasionally awkward Mario Kart-inspired Toad rink, do occasionally get in the way of the entertaining thanks to it’s poorly placed cones and lack of Shy Guy keeper. Saying that, all the courses look great regardless of the sport and the majority do bring some nice twists to the mostly solid core gameplay.

If you’re not playing hockey, then you’ll probably be on the courts trying out Square’s solid, if surprisingly unspectacular take on basketball. Basically a simplified version of Square’s DS release, basketball offers up an enjoyable, if short lived, dose of excitement. While it does share many similarities with the real game, the over-the-top features and simple to achieve alley-oop manoeuvres do tend to overpower the core gameplay, thus removing any chance of a more tactical, skill-based approach to the game. Still, like so much else here, it nonetheless provides plenty of fun in short bursts thanks to the immediacy of the aggressive on court action and over-the-top dunks.

The other two sports, namely volleyball and dodgeball, well, they’re not so hot. Other than proving an amusing diversion once in a blue moon, they’re both unlikely to steal too much of your time. Even played with a group of friends, there just isn’t enough urgency to either game to make them all that enjoyable. 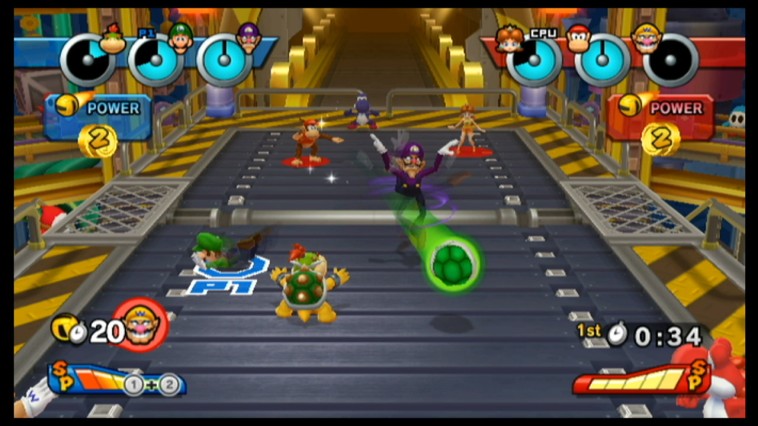 Both games are just too slow and take far too long; a game of volleyball in particular can take bloody ages to get through. It’s a shame that these two sports are so damn lethargic as both had the potential to be very enjoyable aspects of the Mario Sports Mix package. Dodgeball in particular has all the ingredients to be an absolute blast, but thanks to an absurdly slow ball speed the game lacks the kind of urgency found in the real game. The biggest problem, however, is Square’s choice to bring in a health gauge in place of the traditional, high-intensity, one hit and you’re out gameplay that the sport is famous for – what they were thinking there I’ll never know.

It may all sound like doom and gloom thus far but the fact remains that any of the games, even the weaker volleyball and dodgeball are still entertaining in short bursts when played in local multiplayer. Thanks to the games visual charms, wealth of themed courts and outrageous power ups, a room full of kids/drunks will be more than amused if you bang on Mario Sports Mix for a 30 minute session. Keep it on any longer though and things soon start to get a little stale. Case in point: the single player tournaments.

While there is a ton of content here with each sport getting the full Mushroom, Flower and Star Cup treatment, thanks to the game’s inherent simplicity and  mostly useless AI, making your way through all of the tournaments will unlikely prove anything more than a complete chore. While hockey and basketball do get a lot more entertaining once you grind your way through the outrageously simplistic Mushroom Cup, playing through the overly long, often torturous volleyball and dodgeball in single player is not something I’d suggest.

As a single player experience, Mario Sports Mix is just a little too simplistic for its own good and is too often bogged down by idiotic AI and the consistently poor pacing of its tournament set up. Get a few friends around though and things quickly pick up with hockey and basketball in particular proving very entertaining when played in short bursts. Treat this as a party game that you pop on once in a blue moon and you’ll probably get a fair bit of fun out of the package, but buy this expecting a game that you can keep coming back to time and again and bitter disappointment awaits.