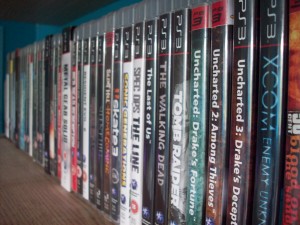 For me the collecting is part of the fun of games

These days deciding to buy a game is not as simple as just buying a game; one can choose from a regular edition, a range of special editions, or can just download the game directly onto the console’s hard drive. With the increasing prominence of services like Steam it seems like gamers are moving onto a more download-based platform to satisfy their needs, but there are still collector’s editions coming out which can cost as much as £90 when first released. So why do some people spend that much money on a game that they could get for £40? And who would choose to download a game at a higher cost than that of the physical disc version?

Let’s start with looking at the classic form of physical releases. Whatever your console of choice happens to be, there is always a certain happiness you feel when placing a new game on the shelf with the rest of your collection. My personal preference is for having hard copies of games so that I can run my finger along the cases like some kind of rich Bond villain, examining his prized collection of stuffed animals. The feeling of downloading games and seeing their icons on your home screen doesn’t really compare. However, many people take the stance that so long as they’re able to play the game it’s not an issue how they own it. And some may disagree with my view completely, with the response that having games on your hard drive overcomes the annoying problem of switching discs and cartridges out every time you want to play a different game, and that it allows you to have all your games in one place (a particular benefit to those living between two homes, or to those prone to losing or breaking their discs). 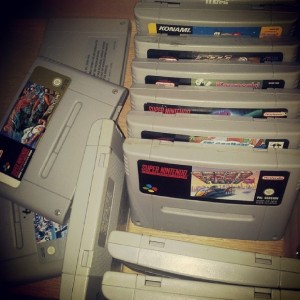 Is the idea of collecting physical copies of games an outdated concept?

Now onto downloadable games. In the old days collecting physical copies of games was a necessity, but not anymore. Today one can have an extensive games collection with no discs in sight, through the various download stores on different systems. I don’t often download retail games for a number of reasons. One reason is that when comparing the price of a downloadable game to the disc version, the disc version tends to be cheaper by at least a couple of pounds due to games publishers not wishing to undercut and thereby anger retailers. Another issue I have with downloading games is that you’re limited by the amount of space on your console, although the solution to that is now becoming cheaper with lower priced external hard drives and SD cards. I do readily admit the convenience of not having to switch out discs every time you want to play a different game, but unless you are particularly prone to losing your games it should only appeal to you if you’re too lazy to get up from the sofa/bed/floor to change the discs around (or if you’re disabled, in which case it’s fair enough). With the increasing prevalence of more indie games the decision to download is often made for you, as small games like those are too cheap and niche to warrant a physical release. However, independent game studio thatgamecompany have grouped three of their well-received indie games into a disc format, showing perhaps that there is indeed demand for physical releases of indie games.

Something gamers have been seeing a lot more of recently are limited editions, which are normally priced at about £50 to £60. For example, I paid £60 for the Premium Edition of Bioshock Infinite soon after its release last year. These regularly include things like a soundtrack, a small hardback art book, a steel book case along with the actual game case, and a small figure or key ring of some sort. Certain retailers also offer the packs with exclusive DLC. The reason people get this version is mainly for the experience of owning all the cool knick knacks that come with it (I know that’s why I buy them). One does sometimes question though, especially when looking at a particularly silly bit of tat that came with a certain game (such as the microscopic unpainted Handyman figurine included in the aforementioned Bioshock Infinite set), is it really worth it? I tend to take the view that it’s only an extra twenty pounds or so, and if it’s a game series that you’re a fan of then I’d say it’s a good buy. 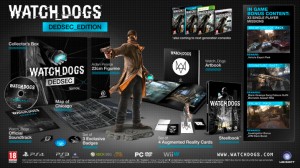 The DedSec Edition of Watch Dogs includes all kind of goodies

Now it’s time for the big one, the collector’s editions, which are more expensive and include a more comprehensive package of content than the limited editions. The collector’s editions are often named after a location or a character included in the game, for example the upcoming Far Cry 4 has the Kyrat Edition. These tend to cost £70 or £80 and sometimes upwards depending on how many cool things are in the box. A lot of them include items such as props from in the game and 20cm statues of a particular character or monster, along with most of the items included with the limited edition of the game. These editions appeal to me more as they come with substantial decorative items that one feels wouldn’t look out of place on a rich gentleman’s mantelpiece, but the problem is just finding the money to purchase them. I’ve recently been battling with myself about whether to get the Watch Dogs DedSec Edition as I’ve been told it’s amazing and worth it, but I don’t have anywhere near enough cash to justify blowing £80 on a single video game. There is also the issue with collector’s editions which are made in limited numbers and quickly go out of stock, which encourages gamers to preorder them. This, however, can be dangerous, as it runs the risk that you’ll preorder the Super Duper Special Edition of a game that looks amazing but then turns out to be crap. I mean, I would have been infuriated if there had been a Ride to Hell collector’s edition that I’d been stupid enough to buy, and then been obliged to live the rest of my life with a Jake Conway figure on my desk.

My personal favourite game form would be the Collector’s Edition as to me all the things just seem so cool and exciting, but seeing as how I don’t have the funds to purchase these editions I usually tend to just get the standard disc version. Feel free to write your opinions below and let me know what your favourite game edition is, or if you’re one of the new race of dedicated download gamers!