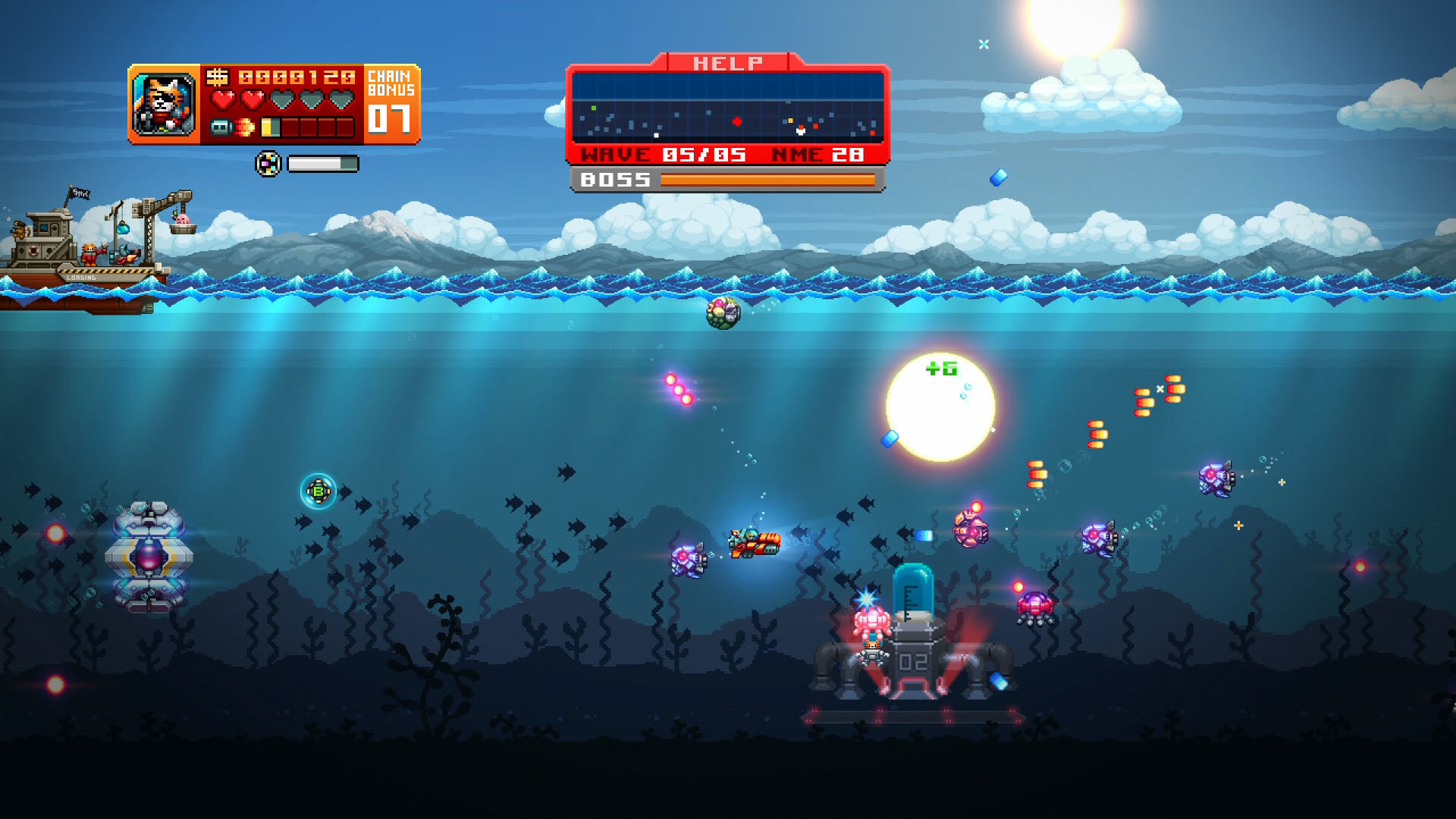 Aqua Kitty is one strange Game. The plot is pretty much this. There is a shortage of milk and Cats around the world are being forced to find new sources to get their fix. This includes overcoming their fear of water to drill out of the sea what seems to be Full Fat Milk. It really makes no sense, that’s one of the few charms of this game that I liked. It really reminds me of a good old 90s retro side scrolling shooter.

The Art and Music Style are truly unique. It has a very 90s retro arcade game feel to it. It really does remind me of my good old Amiga and Sega days (showing my age now). Now I am going to admit, I expected this game to be bad and so expectations were low. To be honest with you, I am surprised. The game is hectic, fast paced, difficult, and basically a lot of fun for what it is. You play a cat in an underwater ship, protecting other cats, that are extracting milk from the sea. For some unknown reason there is all sorts trying to destroy your milk making facilities and kidnap your trusty fellow felines.

The Enemies range from Mechanical sea monsters that kidnap your hard-working Kitty and do everything to destroy your submarine. Some Enemies however even help you. For example, A certain enemy, can be extremely helpful When It is destroyed it explodes destroying a horde of enemies. When a Cat is going to be taken away it alerts you with a meow! Noise, as well as the radar on your map also flashing red. The boss battles are definitely challenging, you will find yourself soon overwhelmed and dodging everything and anything to kill the boss. Since once the boss is gone the level is done. 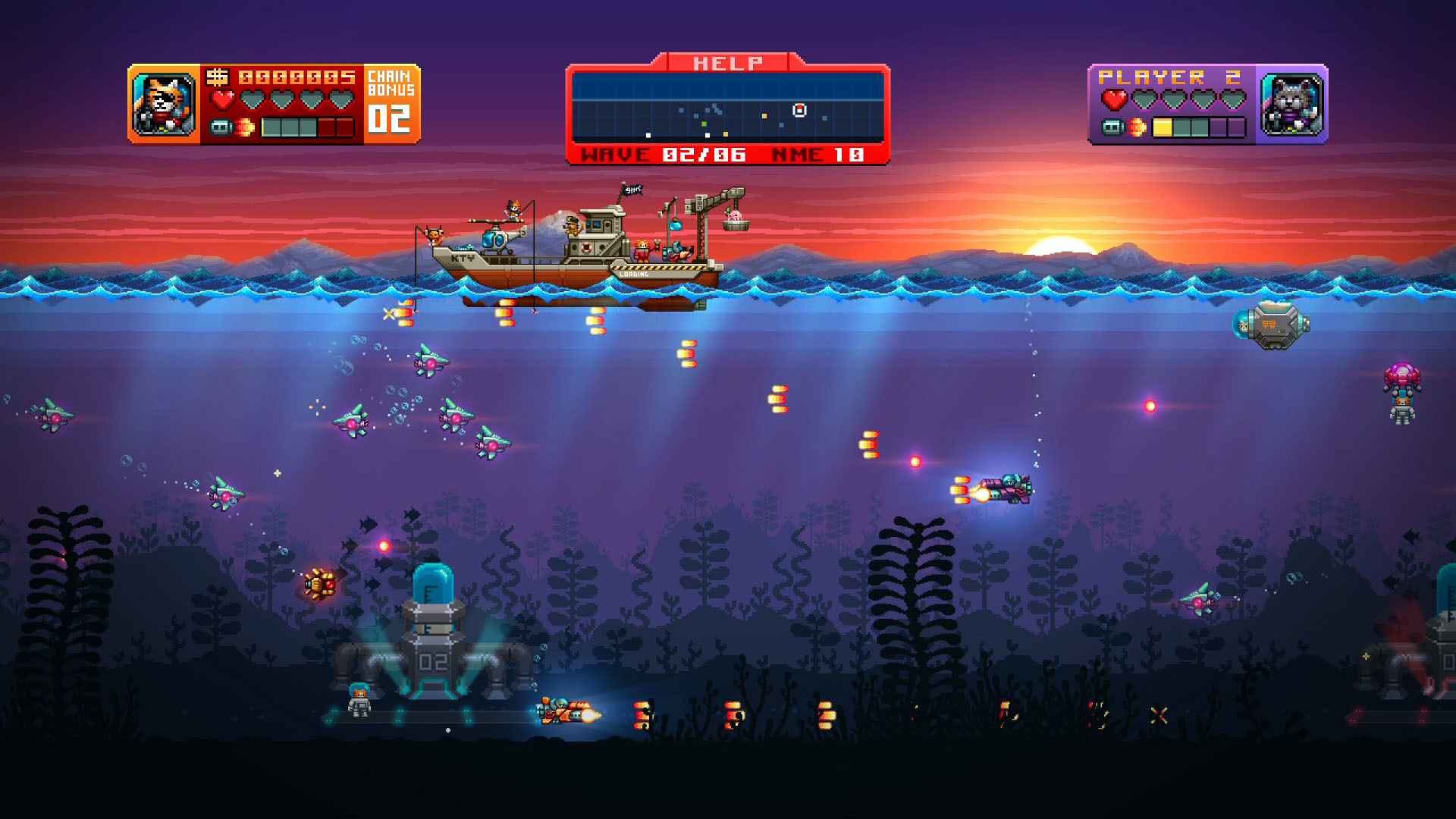 As you progress through the game it gets more and more challenging as you would expect. There is a variety of difficulty modes however. Ranging from easy to arcade. Arcade letting you level up your equipment and become stronger. In the normal and Easy difficulty you still get power ups to help you destroy everything though.

The graphics are one of my favourite things about this game. It really does bring back that retro feel that so many other games have tried to emulate. The cute 16-bit graphics work, you can tell a lot of heart and soul has gone into making the pixel art as close as possible to that of the cult classic 16 bit era. The fact the PS4 version is at 1080p makes the graphics more vibrant and crisp than ever before too.

The controls are very, very responsive and the fact the L2 and R2 buttons make you switch direction makes it easy to switch which way you want to go. You will find yourself going back and forth through the level which loops if you go too far to one side. You use the X button to shoot your normal infinite weapon, O to shoot your rapid fire weapon, which does have a limit so you need to use it wisely.

Music In this game is by Electric Café who have done some compositions for some pretty big TV shows.  As you would expect the music is all Retro goodness and is probably my favourite thing about this game.  All the tracks are a blast to listen to and I actually found myself listening to them while writing this review! Despite the fact they loop they are long enough so you never get tired of hearing them and listening to them gives me that nostalgic feeling we all long for. If you would like to hear what they sound like you can find them at the games official website. 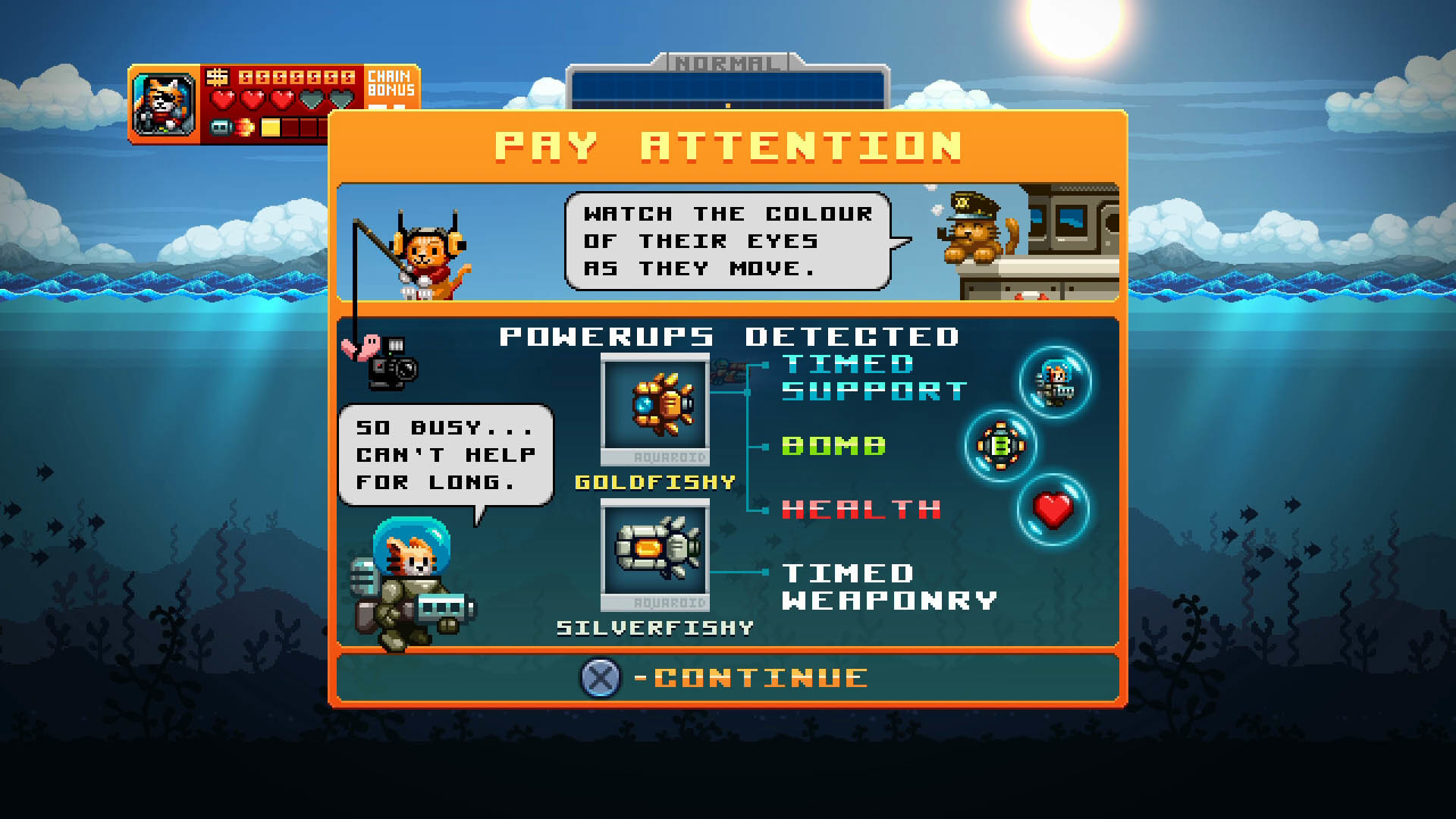 The game does consist of a world map as you would expect however its very basic, nicely laid out and simple to navigate. The game consists of Four areas. Each with a number of levels and an end boss so it will take you quite a while to navigate through the game.

In order to review every single aspect of this game, I decided to ask my other half to a bit of co-op. This was to see if the difficulty increased when Two players are In the game. This however wasn’t the case and it kind of made the game even harder. This was due to if one Cat died, your both done. One major problem we found with this and it’s not only this game that suffers from it, all two player games do.  Is only one person can move the screen on, this means that when one of the Kitty’s was been kidnapped both of us had to go the same direction In order to get to it to save it. When the screen was as busy as it can get in the later stages it was very difficult to see what was going on which caused a few arguments.

Overall Aqua Kitty is a good fun fast paced, side scrolling shooter that retro fan’s should adore. It’s not for everyone and even on Easy the difficulty can be crazy, but it’s this that gives it that ultimate retro experience. Also the fact it has cross-buy and gives you the ability to upload your save to the cloud and transfer to the Vita is a very nice addition. In the End Aqua Kitty is Purrfect at what it does. A Gladius clone, with extra cuteness.