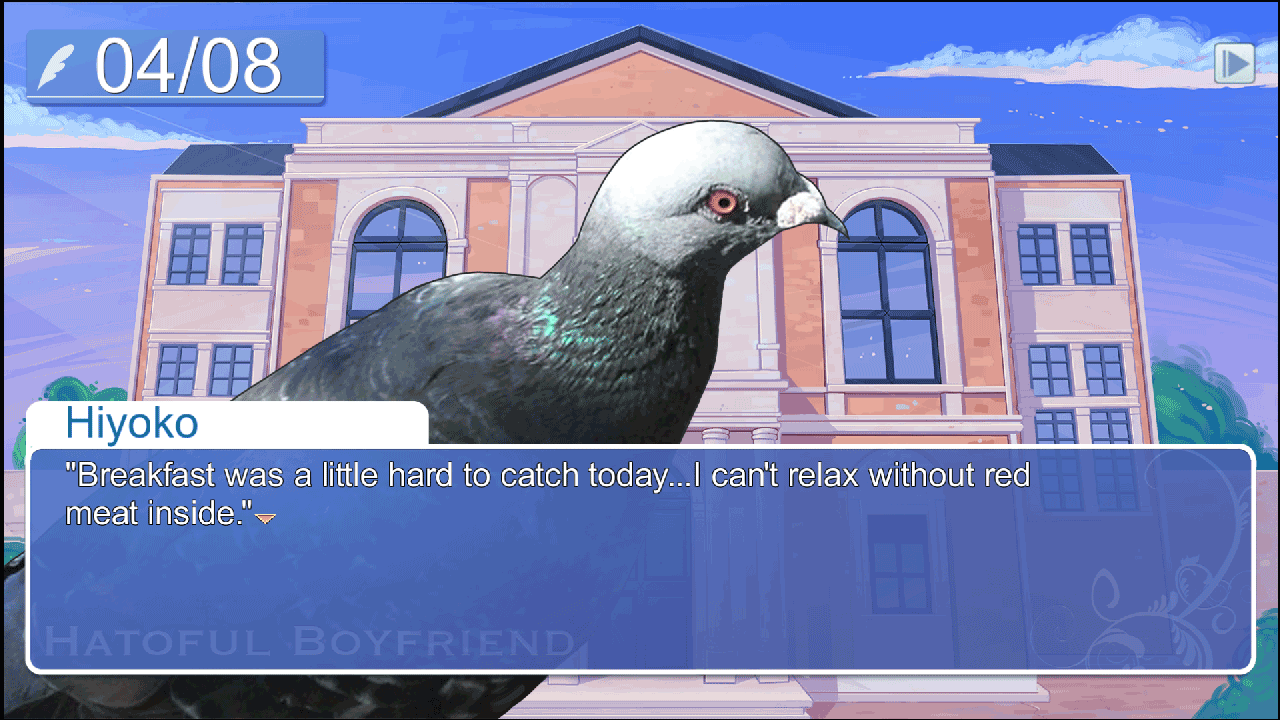 I don’t even know what to say about what I just experienced with Hatoful Boyfriend. Developed by Mediatonic, this game brings you to the Japanese school of St. PigeoNation’s Institute, a school for birds. You, play as female human Hiyoko Tosaka (the name can be changed) and are in your sophomore year at the school, the only human amongst all birds and the rest is simple really. You’re working through your year at school, taking elective subjects (Music, Math and Gym), attending events, meeting boys and falling in love. Well, when I say boys I mean birds, obviously. Frankly this game is just really weird. Depending on the choices you make, the game has different outcomes. Your job is to basically make it through the school year and make one of the pigeons fall in love with you. Don’t worry though, it’s not bestiality, it’s romantic… I swear… it’s not creepy. Screw it, it’s creepy.

I chose options through the game that I as a person would have picked and I started working in the school library and I ended up falling for Nageki Fujishiro, the mourning dove. This bird was shy, mysterious and a loner. He seemed intelligent and sweet so I thought “yeah, if I had to pick one of these birds, I’d choose him.” Spoiler alert, it turns out that Nageki is actually a ghost. It was a twist I wasn’t expecting and yet, in a game like this it wasn’t really shocking. It was just another branch of weirdness. It was a little sad though, as his last words to the protagonist are him professing his love before he drifts into the afterlife, and as unusual as I find this game to be, it was cute. 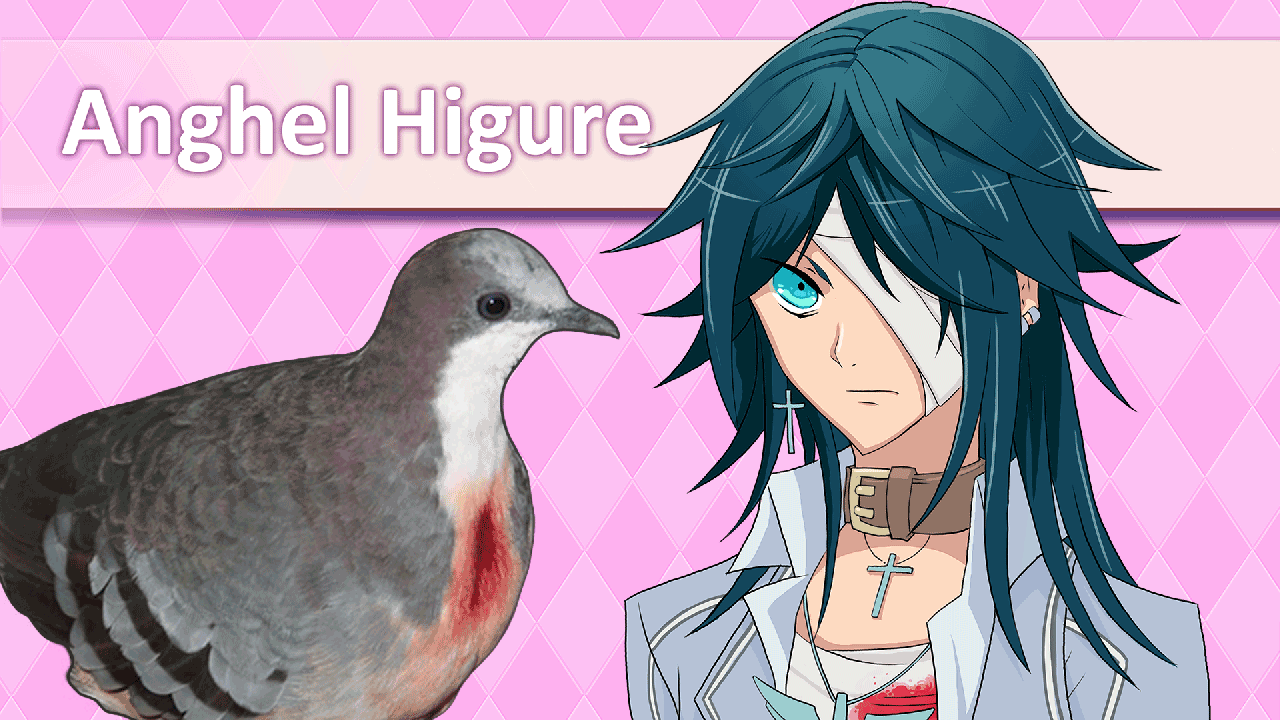 The art in the game was what you would expect from a Japanese dating simulator. Other than the pictures of birds, it was all in the style of anime. The human versions of the bird characters that you see when they’re first introduced were very stereotypical of the anime genre. The scenes were interesting enough to look at, the colours were bright and the scenes looked quite beautiful so I can’t fault the art.

Hatoful Boyfriend’s dialogue was quite amusing however as the game was originally published in Japanese, I’m unsure of how similar the English translation is to the original script, but I imagine it’s pretty close. I thought the bird puns were funny, having the characters say stuff like “everybirdie” instead of ‘everybody’. The characters were fun too and you’re able to pick up parts of their backstory through the game, however this game definitely requires you to replay the story in different ways in order to get a grasp on every one of the bird’s lives.

To me, the protagonist seemed pretty bland other than a few aspects. She’s your average teenage girl from what I can see – wanting to do well in school, getting a part time job (or not depending on the choice you make), meeting boys, participating in events. However, there were a couple of mysteries that really baffled me as I played this game – she’s a hunter-gatherer who lives in a cave. The game doesn’t outright tell you why but during the scenes that she’s “at home”, the graphic that you see is a cave entrance shown from the inside and she mentioned that she’s a hunter-gatherer a few times during the story. I just don’t understand it but that might require you to play the sequel ‘Hatoful Boyfriend: Holiday Star’ or ‘Bad Boys Love’ an alternate far darker story mode. 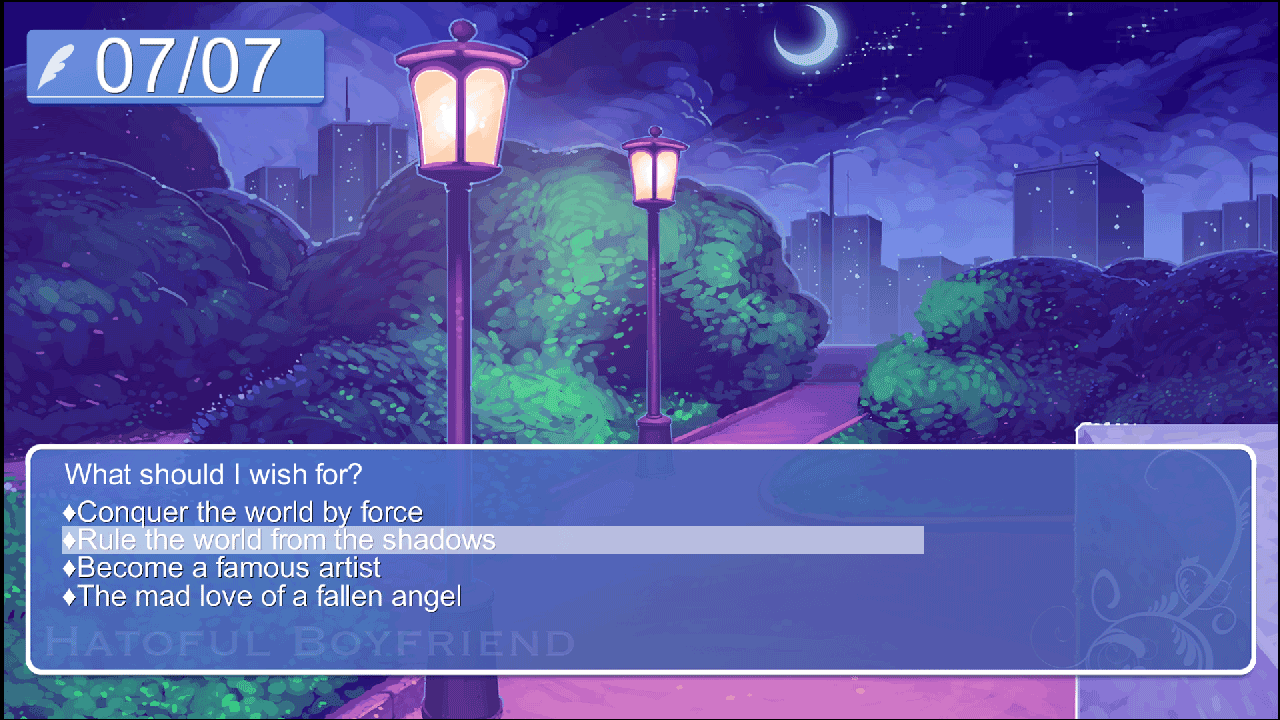 The music was interesting. It was sweet and had an uplifting nature to it. The title music sounded almost like a music box for a child before it went into a more dynamic piece. Some of the score actually reminded me a little of some music from The Legend of Zelda series.

Overall, would I play Hatoful Boyfriend again? No. It’s just a bit too out of the ordinary for me to be able to get on board with. I know some people love it and the story, although really strange, is quite sweet. If you’re into dating simulators or this type of Japanese story game, then sure, give it a go. I just personally don’t find a dating simulator about Pigeons all that fun.

I know some people love it and the story, although really strange, is quite sweet. If you’re into dating simulators / Japanese story game, then give it a go.