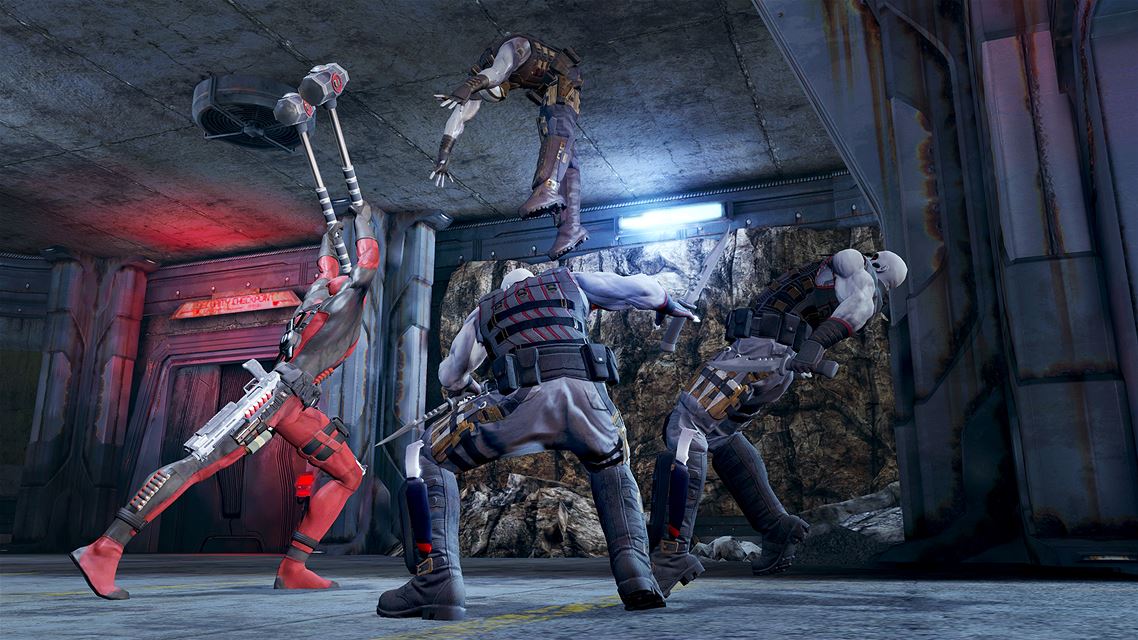 He’s the Merc with a Mouth and, well, thank God he’s got a mouth as, other than the surprisingly well written dialogue and fantastic voice work by, Nolan North, Deadpool is little more than a serviceable action platformer that is elevated above its otherwise rather mediocre status by the brilliant realisation of one of Marvel’s lesser known but nonetheless, hugely loved characters.

After his somewhat disastrous turn in the somewhat disastrous, X-Men Origins: Wolverine, it appears things are finally looking up for one of the world’s most truly bonkers super heroes. Early footage of the upcoming Deadpool movie looks to be everything that Origins wasn’t, and the game, if nothing else, certainly does Deadpool right. The irreverent humour, the breaking of the 4thwall, the infuriation of more established and better known super heroes, it’s all here and it’s all handled brilliantly. In fact, conceptually, this game is almost perfect.

While it inevitably sends up the superhero genre, it does an even better job of making light of the video game industry. With Deadpool aware of the fact that he is actually in a video game (so much so that he appears to have written the script himself), Deadpool has given High Moon the opportunity to build a unique and genuinely funny narrative, an opportunity they have grabbed with both hands. Great ideas have gone awry in the past of course, but that brilliant combination of a largely fantastic script (despite some inevitable repetition) and the fantastic central performance from Nolan North ensures that this is one of the better written video games of the last 12 months. Throw in the fact that Deadpool is basically a readymade video game character and you really do have all the ingredients for something potentially very special. 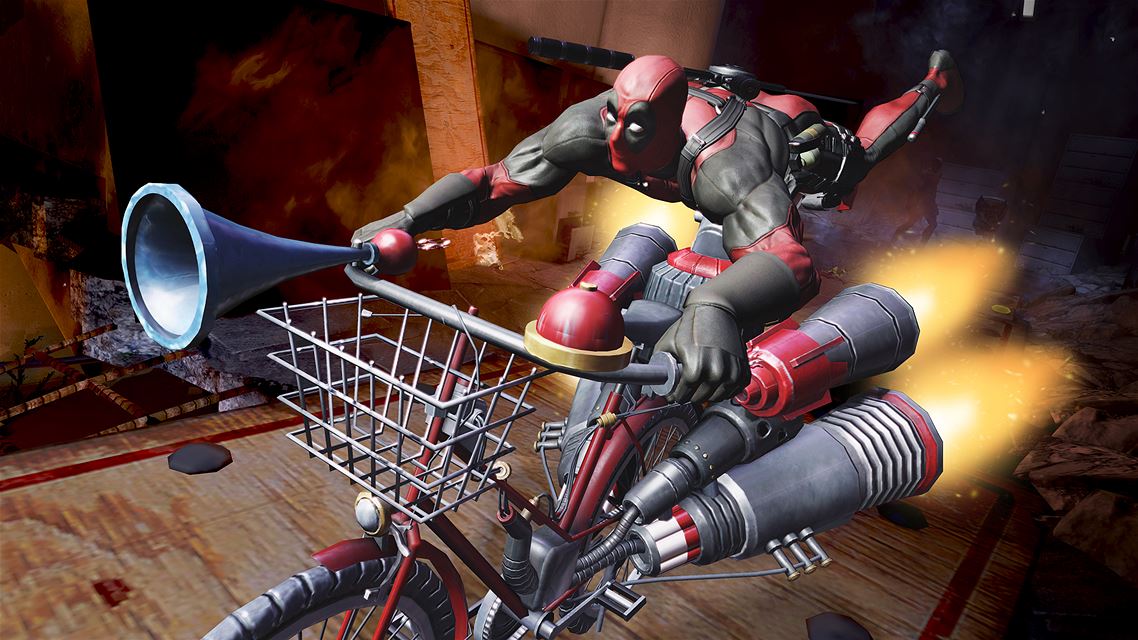 Sadly, while the mouthy merc is done justice throughout, the gameplay is never afforded the same care and attention. There are a handful of cool retro-inspired stages scattered throughout the relatively short campaign that work extremely well within the script and do a good job of breaking up the standard hack ‘n’ slash gameplay, but the core combat, the core gameplay experience, it’s just so horribly and downright depressingly mediocre. I say depressingly as this game could, and really should, have been brilliant. With so much effort clearly put into getting Deadpool right, it’s almost criminal that High Moon Studios (the guys behind the surprisingly brilliant Transformers Cybertron line of video games), haven’t managed to make the core combat more enjoyable.

With a collection of swords and various guns to choose from, Deadpool, complete with bright red outfit, is an absolute ringer for Dante, and while the gameplay does mirror that of Devil May Cry in many respects, it’s such a poor imitation as to be an almost embarrassing comparison. It’s not exactly terrible, but with poor hit detection, a disappointing selection of combos and a relatively boring collection of enemies, fighting in Deadpool isn’t nearly as fun as you’ll want it to be. The aforementioned interludes that include homages to first-person shooters, 2D side-scrollers and top-down old-school adventure games are enjoyable, but they are brief, and honestly, only work as they tend to be done and dusted long before they wear out their welcome. What you always come back to is that core combat, and simply put, in a world in which Bayonetta and Dante exist, Deadpool feels undeniably amateur by comparison. Sure, you could argue that Deadpool was made on a much tighter budget than either of those games, but I expect Transformers: Devastation was created with comparable time and financial constraints, and that managed to be a pretty solid brawler……it’s certainly a damn sight superior to what is on display here. 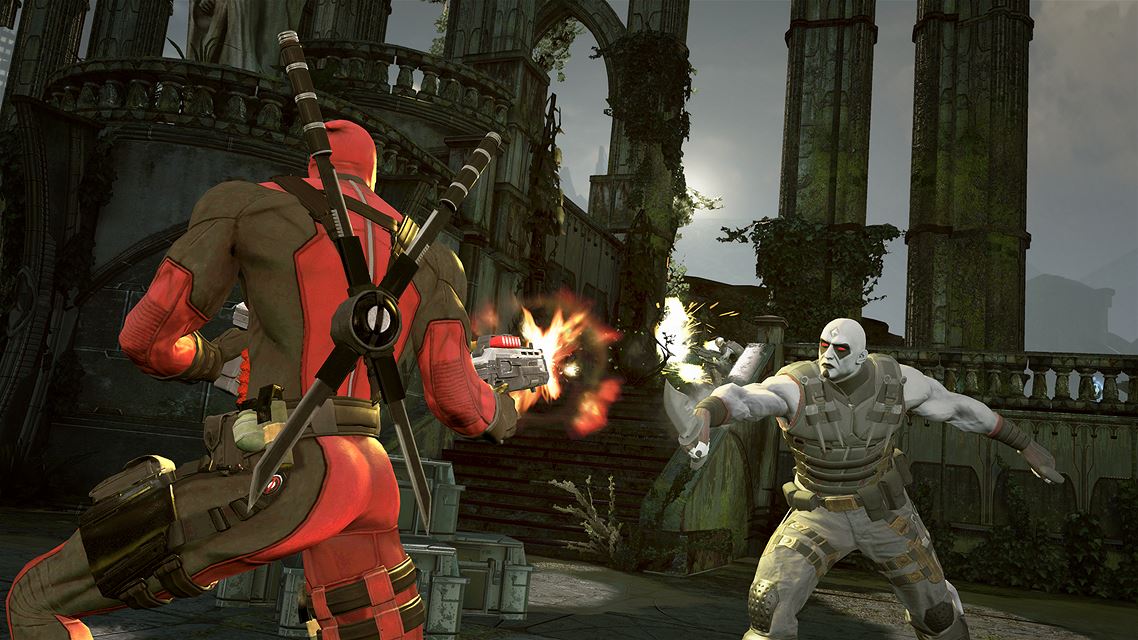 What is most disappointing though is the fact that this re-release of last year’s 360/PS3 original had the opportunity to fix many of these problems, but beyond the additional DLC and a slightly higher resolution, this is exactly the same game repackaged for Xbox One and PS4. It still runs at 30fps, the animations are still stilted and the visuals have seen no improvement of any note. This is clearly a rather cynical re-release to fall in-line with excitement for the new film, and while that is fine to an extent (everyone has to make money), it’s such a shame that High Moon and Activision didn’t take the time to add that bit of polish required to make this a game worthy of such an irrefutably fantastic character.

Deadpool proves to be a genuinely fantastic protagonist with High Moon Studios doing a great job of integrating the character into the world of video games. The script is brilliant and the voice work of Nolan North is consistently fantastic…..which inevitably makes the disappointment of the core gameplay and mechanics that much harder to bear. The combat is average at best (and downright poor at worst), while the less said about the platforming sections the better. Nothing here is broken, (a case of damning with faint praise if ever there was one), but honestly, the sense of disappointment is often palpable given the overriding sense of this being a horribly missed opportunity. High Moon might have proved that Deadpool is a perfect fit for video games……it’s just a shame that they didn’t manage to develop one worthy of his name.