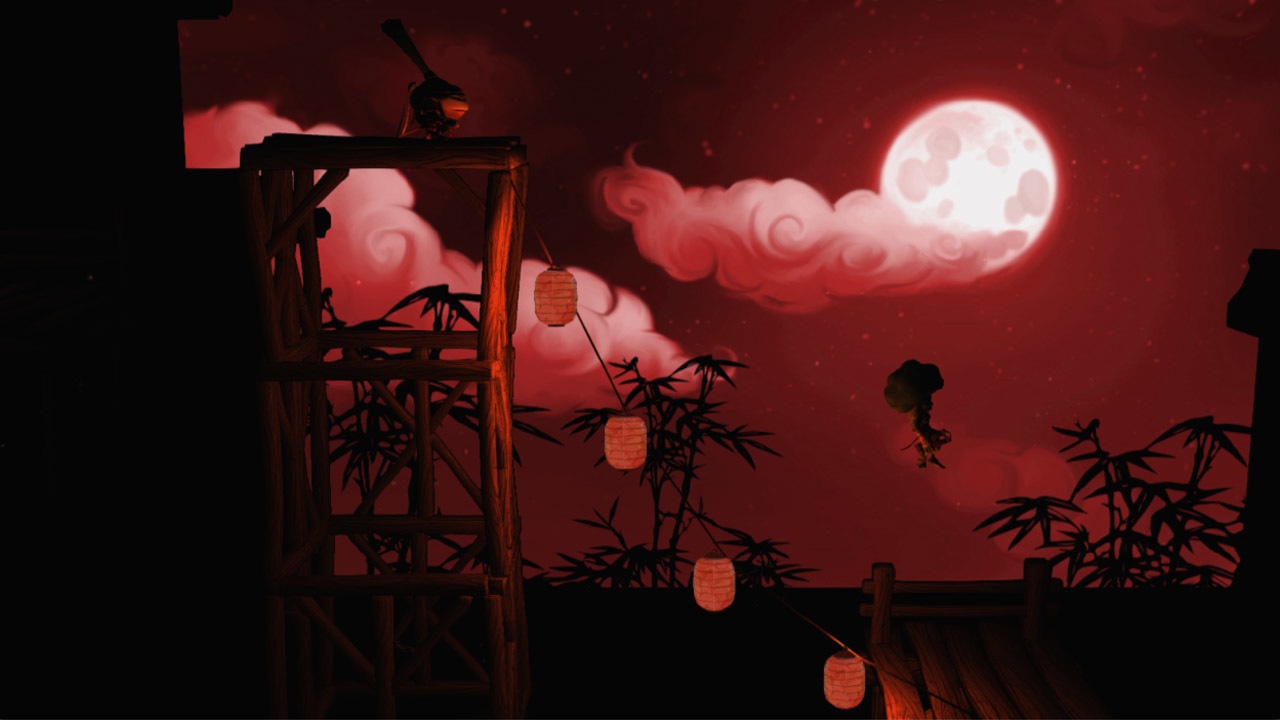 Yasai Ninja is a hack-and-slash game for one or two players that follows the adventures of two warrior vegetables on a quest for revenge and reclaiming their honour. After years of serving his shogun, the onion samurai Kaoru Tamanegi discovers that his master plans on committing treason against the emperor and those in his kingdom. Believing that he has failed as a samurai, Kaoru reluctantly agrees to team up with Broccoli Joe in order to uncover the conspiracy and take down his former mentor before they can unleash their evil plan.

The cel-shaded art style, made in the Unity engine lends itself well to the out-there premise of Yasai Ninja. Unfortunately, that’s about as far as the compliments go and while the game may be aimed at a younger generation of gamers, the flaws are obvious no matter what age you are. Whether you’re playing each of the ten episodes solo or with a friend, neither option makes for a memorable or particularly enjoyable experience.

Right after the game’s opening scene, you’ll be introduced to the game’s controls. X will allow to jump while square and triangle will unleash soft and heavy attacks. The beginning of Yasai Ninja’s problems becomes apparent the moment you encounter your first enemy. It doesn’t matter whether you’re using Kaoru’s blade or Joe’s nun-chucks, neither weapon feels like it’s doing any damage. There’s no weight to their attacks, leaving you to simply rely on speech bubbles from the enemy to let you know whether or not your hits have connected. 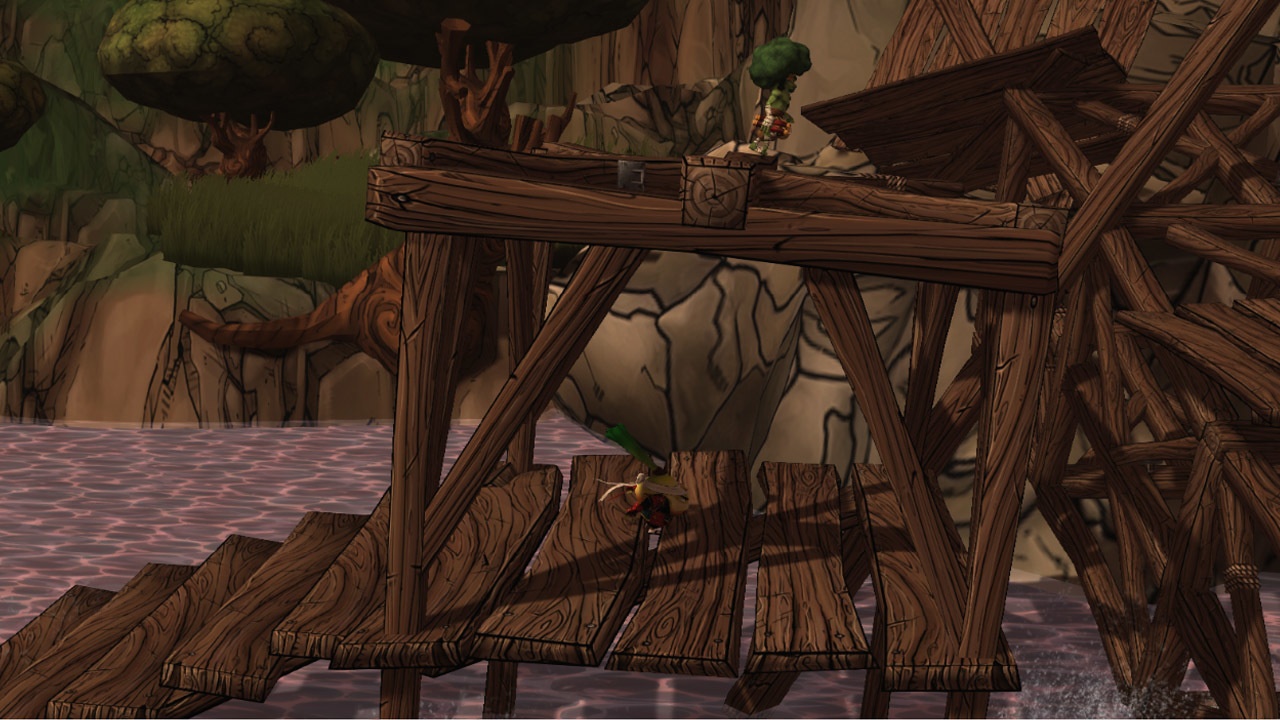 The same goes for dodging and blocking, mapped to the circle button on PlayStation 4. While Kaoru’s block is indicated by a clanging sound, it doesn’t do a whole lot of good when you’re facing off against a wave of enemies, leaving you to frantically keep watch on your health bar and bash the attack buttons until you’ve turned the baddies into courgette kebabs. Even if you do manage to perform a roll with Broccoli Joe, you don’t move very far, resulting in what looks like someone attempting to do a cartwheel and failing miserably.

The character designs may look interesting, but they don’t mesh well with their surroundings. The attack movements just look aimless while running around the map causes the camera to jiggle up and down in a particularly jarry manner. Running up stairs causes the characters to seemingly look like they’ve lost their fight while platforms split up by water, which threatens to turn our vegetable heroes into broth, can be difficult to navigate when the camera doesn’t quite reveal the split in the path. Worse still, the frame rate seems to drop when there’s a large group of enemies on-screen or when a comic strip style cutaway reveals the location of a door you’ve just opened.

Most level designs aren’t up to scratch either, with many simply using a copied and pasted template throughout, usually culminating in a three-way split towards the end that indicates a puzzle is nearby. This usually requires swapping one character for another using the L1 button and making use of their individual traits in order to free prisoners, open doors or traverse large chasms. Broccoli Joe can dismantle mechanisms through a quick time event that will usually make up one half of the puzzle, while Kaoru can push podiums into various slots and complete the task to progress further into the level. One level in particular had one character operate a lever that would move platformers, while the other jumped across. The problem is in order to get both characters across, you have to do the same puzzle in reverse order, making levels feel far long than they are or need to be. 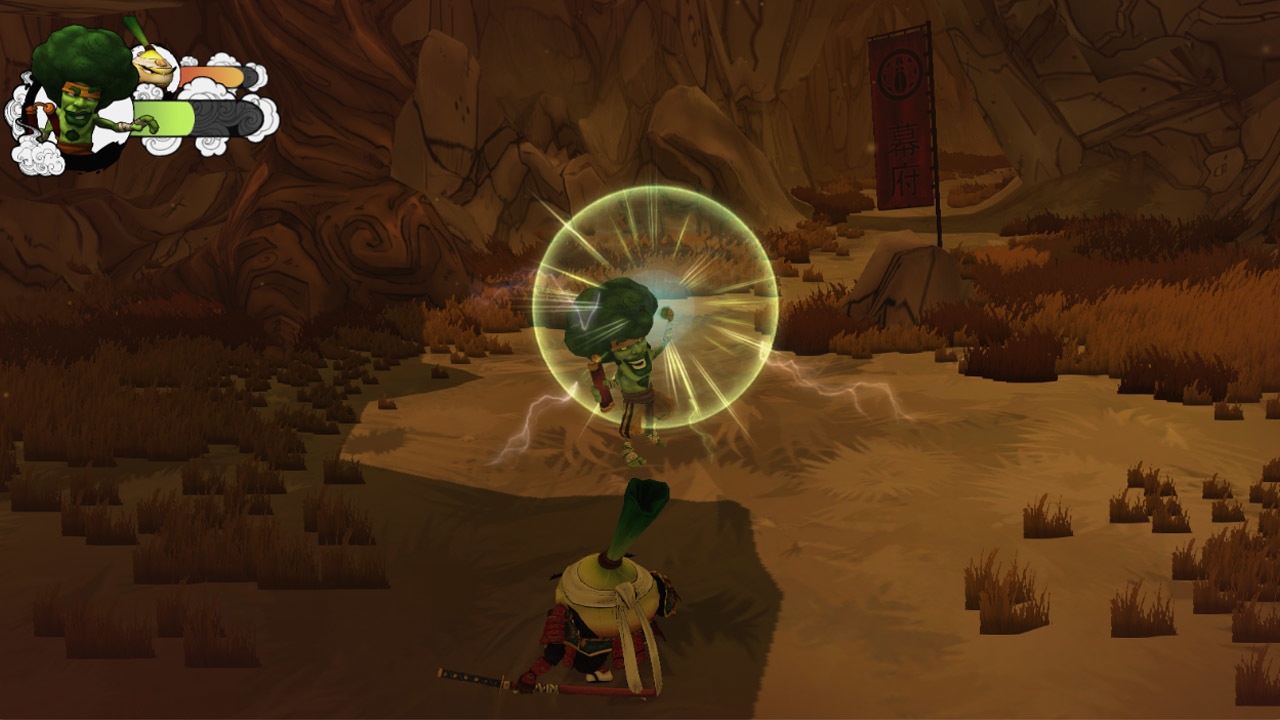 Two-player mode offers a split-screen experience that takes some of the tedium out of gameplay. Going your separate ways to complete puzzles quicker makes for a smoother experience, but with the combat as broken as it is, you’ll find yourself trying to fight off enemies while reviving your teammate. However, the dodgy camera id disorienting enough without having to see it twice on the one screen. Glitches appear twice as obvious and incorrectly timed jumps from one player can result in disaster for the other.

Perhaps the biggest surprise of the game was the inclusion of a few scattered 2.5D levels that fill in blanks of our heroes’ journey. A more traditional platformer at heart, these levels have the extra bonus of providing an added challenge and rating your performance once you reach the goal. Tricky jumps and moving platformers mean that you’ll have to dust off all that old training from the glory days of Super Mario, but without collectibles along the way, having to repeat segments of gameplay because of a mistimed leap is utterly frustrating. Still, it’s the best part about the whole game.

Yasai Ninja is riddled with so many problems that it makes what should be a relatively breezy ten episode adventure feel longer than it should. The fun premise of vegetable ninjas seeking vengeance should have made for fine taste of exotic cuisine. Instead, this is one game that will probably slip away quietly onto the compost heap.