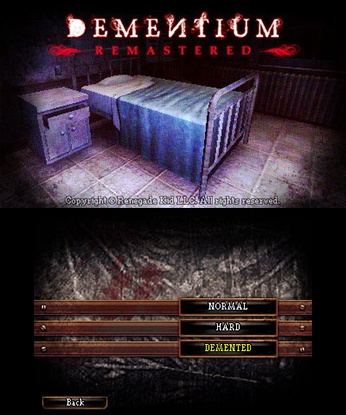 When browsing through the 3DS catalogue, it’s pretty clear to see that this handheld is marketed towards a young audience. The majority of games available (both in stores and the eShop) are of the family friendly variety, and there is a lot of fun to be had with them. However, this week I have had the opportunity to try out something a bit more mature with “Dementium (remastered)”. Originally released as ‘Dementium: The Ward” on Nintendo 3DS, this first person horror game has been beautifully restored with full 3D gameplay, smoother 3D models and a more balanced challenge.

The plot of Dementium is brief and obscure. You begin the game being wheeled through a hospital ward against your will. The ward is infested with demons and creatures of the damned. You’re thrown into a pit and wake up in a hospital bed. That’s all you’re given. While exploring the hospital, the game will continuously drop heavy-handed hints that the reason you have been brought here is because of your tainted past. Within the first room of the game you’ll find a notebook with the words ‘Why did you do it?’ etched on the front page. A short distance later I came across a piece of graffiti which simply read ‘Murderer’. It’s hardly subtle, but I was engrossed and curious to learn more as I played.

At its core Dementium is a first person shooter, however it isn’t an ‘all guns blazing’ state of affairs as it also overlaps with elements of survival horror and even some light puzzle solving. The hospital is essentially a labyrinth of corridors and small rooms. Doors never actually physically open, instead each door you interactive with will trigger a short fade transition and load the next room.

Enemies do not roam free and tend to only attack when approached, so the combat is spread out amongst areas of exploration and tension building, similar to a Silent Hill or Resident Evil title. Many of the creatures you’ll encounter are coded to charge at you mindlessly with little AI or attack patterns. As such if you are able to keep a cool head, proceed with caution and shoot straight at the drop of a hat then you shouldn’t have too much trouble progressing. The combat is a little on the clunky side and trying to use melee weapons on smaller enemies such as worms is near enough impossible. However, there is still fun to be had shooting demons and there are some very satisfying weapons to choose from such as the shot-gun and the buzz saw. 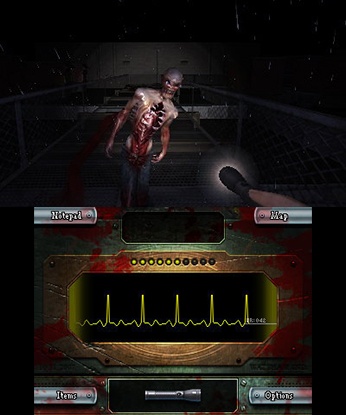 Despite its appearance as a first person shooter, one of the more enjoyable aspects of this game is the puzzle solving. I didn’t encounter anything too cryptic, however it was refreshing to play a shooter where you have to pause to note down a code or explore around for clues. The first few chapters play in a rather linear fashion. Many of the doors you come across will either be locked or blocked with furniture, forcing you down a strict path. However after encountering your first boss the game starts to open up a bit, giving you the opportunity to study the map and explore around.

The first thing that struck me while playing was the visuals. Dementium takes a leaf out of Doom 3’s book in that it is very dark. Before you discover any weapons, the first important item you’ll pick up is a flash light. This will be your best friend throughout the game as you won’t be able to see more than two foot in front of your face without it. One skill that you’ll need to master early on will be the ability to juggle the flash light with your weapons as you will not be able to hold both at once. By toggling swiftly between your light and guns you should be able roam the corridors without getting caught off guard.

For the most part this game looks pretty decent. Although on close inspection the textures in this game are a bit mediocre by modern standards, the overall composition of the graphics with the lighting and enemy models (some of which are completely grotesque) really work on the 3DS. The atmosphere in Dementium is really engrossing and looks particularly good with the 3D turned up. It was like looking through a window into a haunted house and I highly recommend playing the game this way. There are lots of gory details scattered throughout the hospital such as nail marks in the walls and trails of blood worming through the corridors to really help bring the horror experience to life.

There are a few small issues with the graphics which were disappointing. Occasionally while progressing a short cut scene will trigger, unfortunately these scenes do not utilise the handhelds 3D screen. Also, when enemies die they simply burst into a red mist. I felt that this was a bit of a cop-out for a game that looks pretty gory in all other aspects. 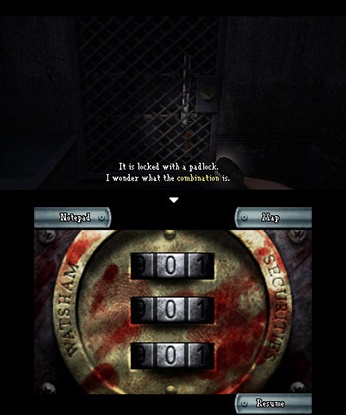 The majority of the game takes place in the hospital with occasional breaks to external environments such as in the courtyard or on the roof. As a result a huge chunk of the game looks very repetitive and can cause a bit of confusion as it’s very easy to get lost in the moment. Thankfully using the touchpad you can access a very handy map and notepad to help you keep a log of your progress.

The sound is actually as functional as it is immersive. In addition to the creepy score which is composed of synthesized horror pieces and reverse sound effects, you can hear when enemies are nearby and monitor the state of your health by listening to the speed of your heart rate.

There are a number of options when it comes to controls. The circle stick controls movement, however you have a choice of directional controls. If you have the new model 3DS you can turn with the C-stick, however if you don’t you can either use the touch pad or the face buttons. I’ve played first person games in the past that utilise face buttons to replace a right analogue stick, and usually I do not find it to be a particularly comfortable way to play. Surprisingly this set up actually feels very comfortable in Dementium. The movement is quite smooth and responsive which helps add to the emersion of the experience. You can interact with the environment and use your weapons by pressing the trigger buttons and you scroll through your infantry with the D-pad. Once you’ve collected a lot of weapons it can be difficult to find the one you want in the heat of the moment. Some shortcuts on the touchpad would have been handy, but it’s not a major issue.

As much as I enjoyed Dementium, it is relatively short (clocking in at around 4-5 hours), only supports a single save file and features no other game modes outside of the difficulty options. Having said that, it was very refreshing to play a solid horror title on the 3DS and I’ll definitely be picking it up for another play through at some point in the future.