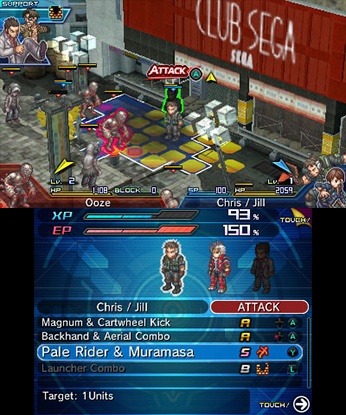 It doesn’t take much time to realise how much fan service Project Zone X 2 crams into its turn based Tactical RPG, and how much it relies on this to paper over some of the cracks in what is on offer. The original Project Zone X was the ultimate fan crossover when it was originally released, with a cast of characters that read like a who’s who of SEGA and Capcom favourites all tied up with a turn based bow.

Stepping back into the same world with some updates and improvements seems like the natural thing to do.  If it allows to increase the already abundant list of fan favourites then what’s not to like? Let’s get one thing clear, as far as presentation goes,  and as far as the number of nostalgic smiles that will appear on your face, first impressions are very good indeed.

The graphics vary between the wonderfully produced 3D arenas and a 2D plane when the proper fighting kicks off in a style that again is extremely pleasing on the eyes for the first ten or so hours. Combat has changed since the first Project Zone X, where you’ll decide who you’ll move character by character,  as opposed to having to work through a predetermined order of play. This allows you freedom to approach battles how you want to and allows you to concentrate on immediate threats rather than praying you don’t get wiped out while you wait. 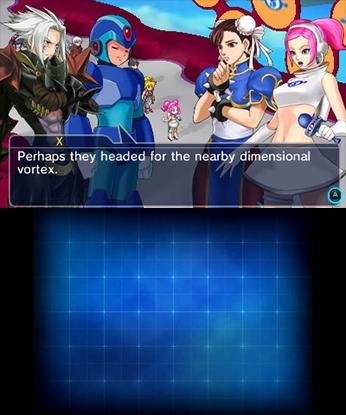 Attacking while having an ally next to you will bring then into the fight, allowing you to increase the damage dealt in your favour and potential finish the fight extremely quickly. Once you have made your move, the action moves to a 2D side on-screen where you fight using a combination of the dpad and face buttons, while the use of the L1 can bring in a support character with the potential to produce a Cross hit for additional damage. The idea in the battle screen is to juggle your enemy in the air with well-timed attacks in order to hopefully wipe them out and hit them at the last possible moment before they hit the ground, using combinations of the A and D-pad. Attacks that you don’t use can be stored up for the next round which is useful when you know you’re about to face some tougher enemies.

Even when you are defending, you’ll get a choice on your strategy, with a full defend allowing you to negate any damage completely, while a counter allows you to hit back and often score enough damage to wipe out the attacking opponent. It offers an interesting risk and reward component to proceedings and can often turn the tide in some of the more squeaky bum situations.

Between battles you’ll have the chance to purchase additional skills and equipment to help your band of characters. This means you can either treat Project Zone X 2 as a light casual play around or a much fuller and deeper experience. You will also get the chance to experience the double-edged sword of the interaction between the characters. 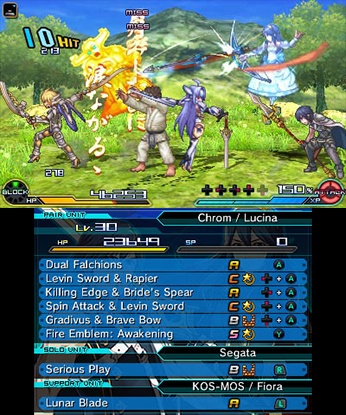 The problem with a crossover with the sheer number of characters is similar to having a film full of A-list celebrities, in that everyone wants their time in front of camera and their chance to deliver some witty dialogue. Cutscenes that at first gave you a smile of nostalgia soon descend into multiple threads of tiny chaos as you are never quite sure of what is really going on, and often you’ll find yourself wanting to skip past entire walls of text once you’ve lost yourself in the dialogue.  You completely understand why it had to be done in order to satisfy the gods of intellectual property, though many times you’ll be asking yourself why.

Some of the humour is cringe worthy especially when it comes to talking about the female characters and whether you’ll find some of the ‘terms of endearment’ unnecessary, I’ll leave up to you to decide. Secondly, while the battles themselves are wonderful carnage filled fun festivals, it won’t take you too long to tire of the lack of long-term depth especially since the format is repeated again and again. You’ll move from one small group to another, showing them what for, then take on another group before facing the boss of that particular section.

The plethora of different recognisable characters are what keeps Project Zone X 2 from being a shallow throwaway title, as you’ll spend a lot of your time bathing in nostalgia while smiling. If it wasn’t for this then there is a chance you would consider not giving it the time it deserves. Graphically it is an amazing game to witness on the small screen and for those of you not looking to find answers to the universal questions from Project Zone X 2 then you are in for treat, as some of the battles turn the chaos level up to eleven. It’s good fun, with simply action and too much dialogue, but well worth being added to the 3DS Home screen.