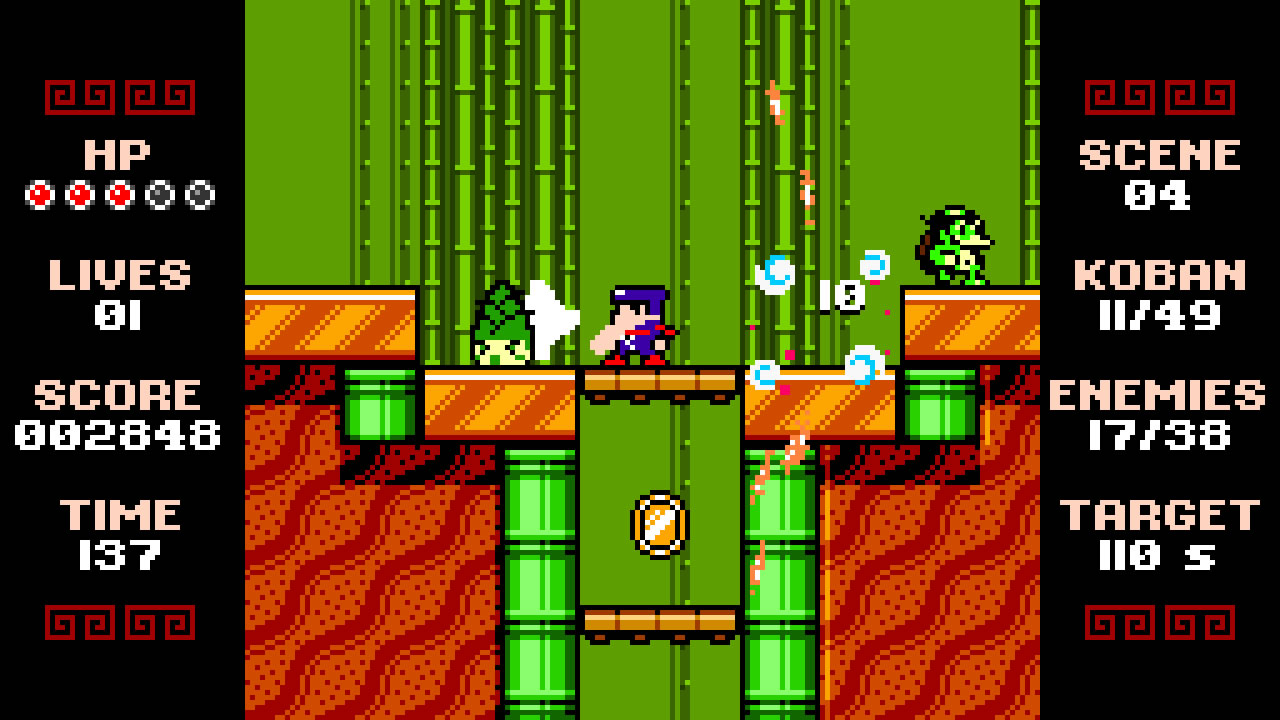 One of the benefits of being a 30 something gamer in the modern age is the wide variety of titles available that appeal through nostalgia. When it comes to retro style indie games the market is very saturated and offers a great deal of choice, so much so in fact that it can be difficult to separate the quality from the quantity. This week however, I’ve had the opportunity to play something that not only has an authentic 8-bit Nintendo feel but is also pretty decent game.

Ninja Senki DX is the latest release from Tribute (of ‘Mercenary Kings’ fame). It is a revamped version of their début freeware title which marks the fifth anniversary of the original’s release. All of the game’s original content is included along with a whole host of new features.

You play as Hayate, a fast, shuriken wielding ninja who is on a mission of revenge. A princess named Kinuhime has been murdered by a demon and it’s your job to hunt him down. The plot is relayed to the player through a lighting fast opening cut scene, reminiscent of something like Double Dragon.

Ninja Senki DX looks and plays like an authentic 8-bit platform game. Personally I felt as if it was a fusion of the original Ninja Gaiden mixed with a little bit of Megaman. Apart from the absence of slow down and sprite flicker, this game could easily be mistaken for a NES title. The sprites and textures are instantly recognizable and are used to craft some exquisite looking locations. It may not have the same level of detail as a game like Shovel Knight or Axiom Verge, but the chunky cartoon sprites do look pretty good and are reminiscent of early Capcom titles. 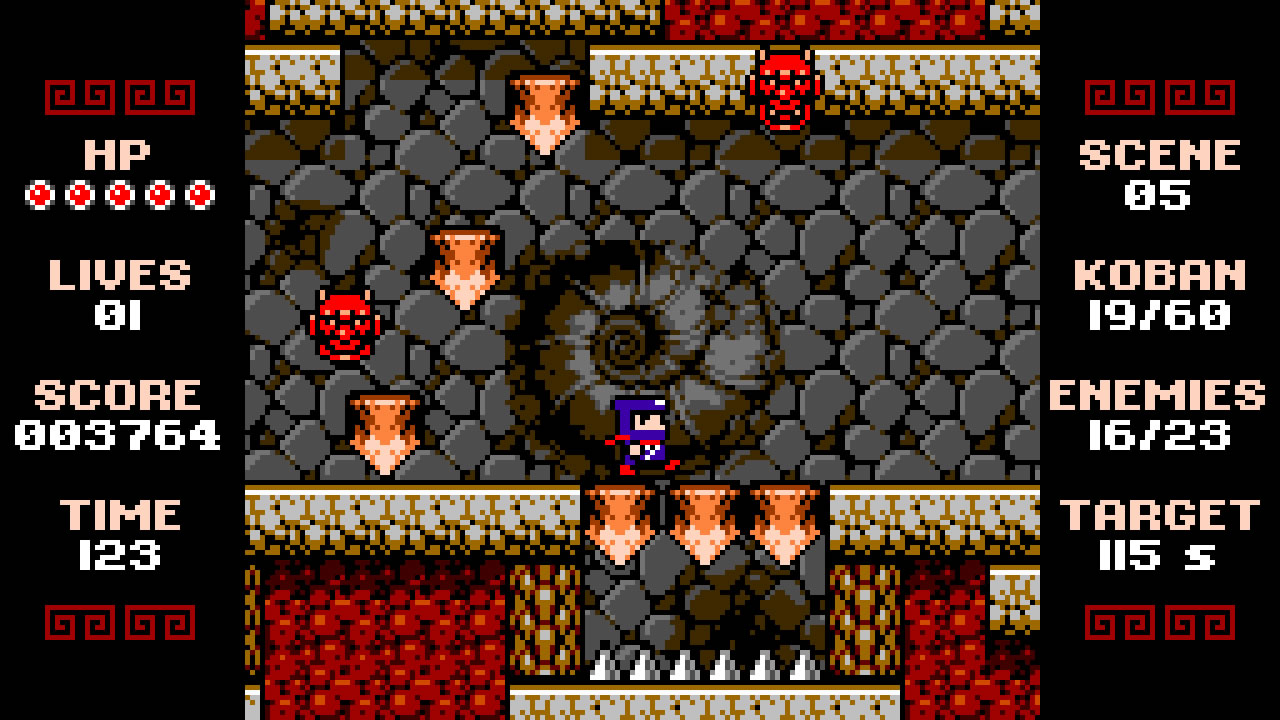 Hayate tackles each stage in a linier fashion. There are 18 stages in total, although each pair of stages will share a particular theme / tile set. You can run, jump, double jump and throw shurikens at enemies (of which there are many different types and some take more hits to destroy than others). Each stage will have a specific enemy count (so you don’t have to worry about awkwardly placed enemies constantly respawning), a number of coins to collect and a timer. In order to beat each stage you simply need to reach the exit, but to master each stage you have to clear the board and dash to the exit within a time limit.

Although the premise is simple, the game itself is very challenging. You have unlimited continues and the game auto saves after each stage. However as there are no power ups or health drops, every hit you take counts. The enemy placement has been designed to try and catch the player out at every opportunity and the inclusion of ‘knock back’ physics when the player takes damage makes those bottomless pits all the more troublesome to deal with. It’s technically possible to beat each stage within a couple of minutes, however I usually struggled for around 15 to 20 minutes on each while encountering the ‘Game Over’ screen several times.

Ninja Senki is deliberately primitive as it strips out many common mechanics that you would expect to see in a platform game. There are no power ups, no extra weapons, Hayate can only fire directly in front of him, and you have little choice in how you progress. This may make the game sound a bit bland, however it helps to keep the focus on pure skill rather than strategy or knowledge of the system.

The controls are very simple and reflect how basic this game is. Movement is handled by either the D-Pad or analogue stick, ‘X’ is used to jump / double jump and ‘square’ is used to shoot. The decision to reduce the controls to two trigger buttons was presumably to simulate the NES control pad, however even classic Nintendo games came up with ways add some variety to character control. For example, in Castlevania you could use a secondary weapon by holding ‘up’ while pressing fire. In the later Megaman games holding down the fire button would charge a stronger attack. There is nothing like this in Ninja Senki DX which I think is a shame. 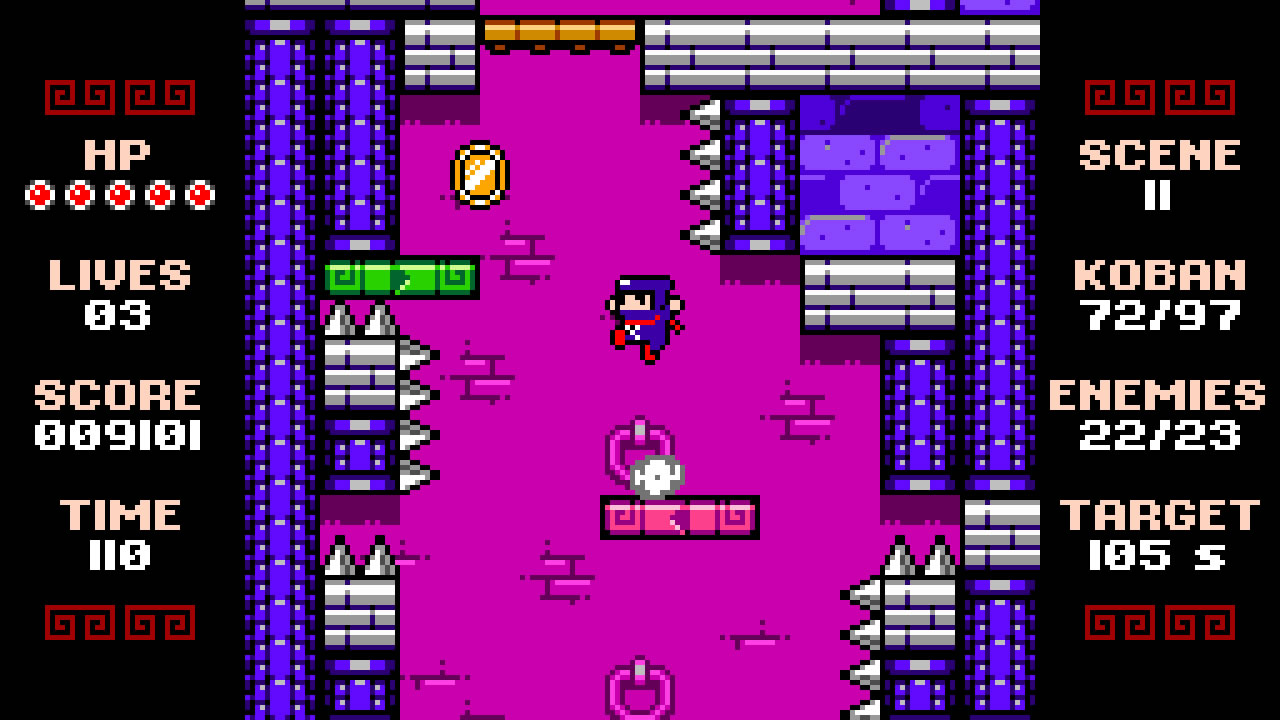 One of the new features in this DX edition is the inclusion of a remixed soundtrack (this is the default soundtrack for this version, however you can switch it for the original in the options menu). I tried playing with both soundtracks and I much prefer the remixed edition. All the music in this game is chip tune, however the remixed version’s sound is a lot more dynamic with better bass, whereas the original version sounds a bit flat and washed out.

The best feature of this new edition is the inclusion of multiple game modes which add a lot of replay value for fans. In addition to the regular game there is a challenge mode which gives players the option of trying particular stages in order to try and achieve the various bonuses (killing all enemies, beat the time limit etc.) that they may have missed on the first play through. There is also a hardcore mode which makes the game feel even more retro as it removes the ability to save the game. There are also a couple of special unlockable modes for highly skilled gamers.

Although I genuinely enjoyed the challenge that this game has to offer, I do feel as if it’s a little bit lacking in places. Once I got about half way through I began to notice new elements such moving platforms and timed fire traps which drove a bit of life back into the experience. However I felt as if these were placed too far down the road as the entire first half of the game seemed a bit dry and repetitive.

There is fun to be had with Ninja Senki DX and the inclusion of additional game modes adds a lot of replay value for those who enjoy it. However due to the repetitive nature it’s a game I can only really enjoy in short bursts. Some progressive elements such as power ups and extra weapons would have added a bit of flavor to what is otherwise a very authentic retro style title. If you’re a fan of the Nintendo hard platform games then I can recommend checking this one out.