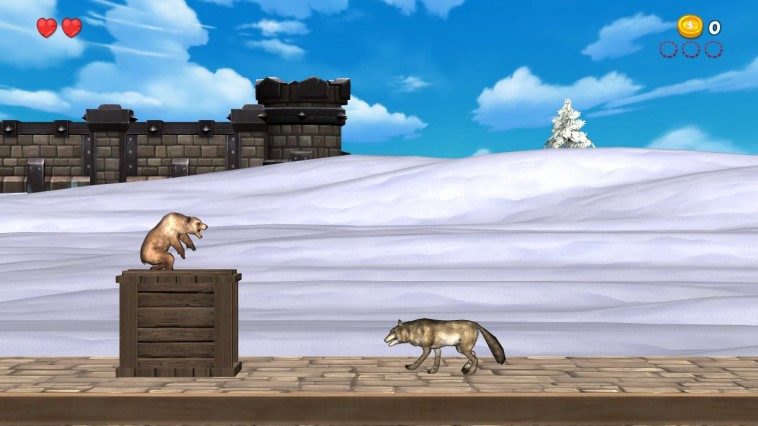 Epic Dumpster Bear is an extremely odd platform title by Log Games. The plot is very simple. You play as an angry bear whose natural habitat has been destroyed by construction work. It’s your job to find out who is responsible and unleash your wrath upon them.

The game plays as a straight forward 2D title, however the graphics consist of 3D models rather than a flat pixel based application. It takes a great deal of inspiration from the original Super Mario Bros games in terms of lay out, however there are a few motifs that can be recognised from other franchises such as Sonic The Hedgehog and Donkey Kong Country.

There are 6 themed worlds (Garden, Snow, Space Station etc) which each consist of about 7 stages, plus a boss and a handful of special stages. Each world is navigated via a crude map system where you have to either beat a stage to unlock the next, find a hidden exit to enter a secret stage, or you can pay to open bonus stages using the collectible game coins.

Stages are usually around 5 to 10 minutes in length and the aim of each one is simply to reach the exit. Many of the enemies and obstacles are reminiscent of those found in Super Mario Bros. On the first stage the goombas are replaced by roaming cows and the piranha plants in pipes are replaced by alligators in barrels. I say on the first stage as the enemy skins tend to get swapped around depending on the theme of the stage you are in. 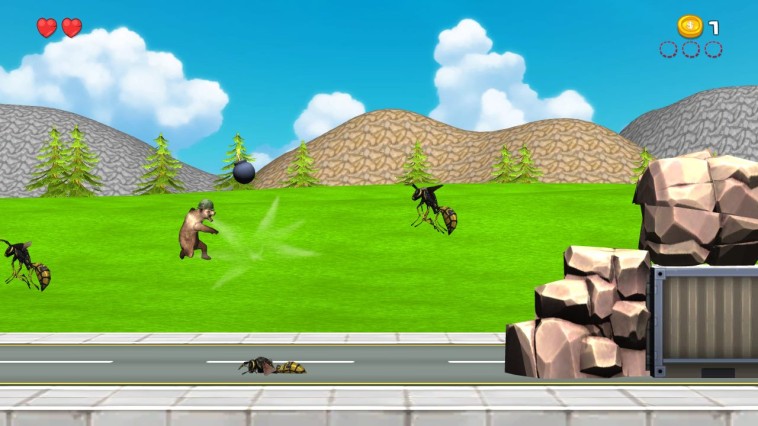 You can control the bear with either the GamePad or the Pro Controller. The D-Pad controls movement which is momentum based and two face buttons are used for running and jumping. You can also make use of a very handy wall jump by holding the D-Pad against the surface you wish to kick from and pressing jump. You can attack enemies by jumping on them however you can also find power ups in the form of hard hats which grant you the ability to throw bombs (think ‘fire flowers’).

The long and short of it is that this game is a bit of a Mario rip off with similar game play mechanics and obstacles. The only reoccurring elements which stray from the Mario formula are the pinball style bumpers (think Sonic the Hedgehog) and grinding rails (think Sonic Advanced).

The theme of this game is pretty ridiculous, which is reflected in the armature graphics and bonkers cut scenes. For some reason the detail and tone of the game models varies quite a bit. There appears to be a disparity in quality between the characters and the surrounding scenery. It’s as if they were either created by completely different artists or that some of the assets were purchased externally. It doesn’t look completely dreadful, but it certainly looks inconsistent.

By contrast the sound and music isn’t actually that bad. Each world has a couple of pieces of music (usually a separate day and night theme) which sound mainly synthesized, but the compositions were well put together. It’s nothing exceptional, but whoever came up with the music did a pretty good job. 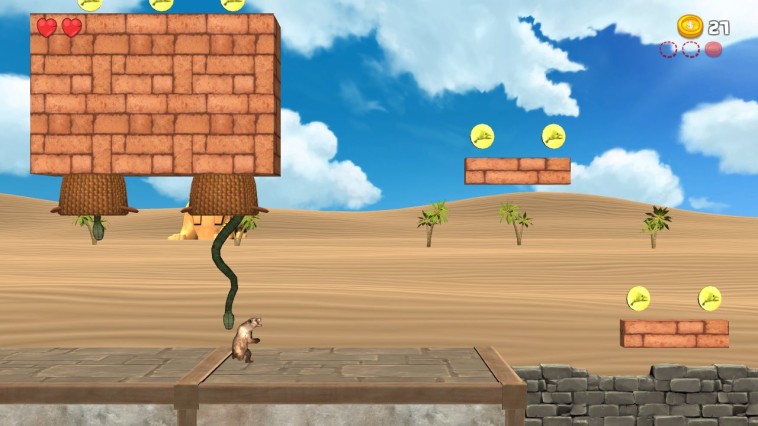 As far as the gameplay is concerned there are a lot of areas where this title should be commended. For the most part the bear is very comfortable to control. The tight responses combined with this game’s smooth frame rate makes for a decent platform experience. The only times where the bear doesn’t handle so well is when dealing with the pinball style bumpers. There are some areas where you will have to traverse an obstacle by bouncing off from these bumpers, yet whenever you hit one it really kills your momentum and makes it difficult to position yourself.

There also seems to be a conscious effort to keep on introducing new elements and obstacles as the stages progress. I remember being well over an hour into the game and still encountering brand new enemies, hazards & projectiles that I hadn’t seen previously. There was never anything particularly groundbreaking or innovative, but whoever designed the levels did make an effort to try and keeps things interesting as the game progressed.

It goes without saying that ‘Epic Dumpster Bear’ doesn’t take itself too seriously, unfortunately that doesn’t do it any favours. It seems as if its goofy theme has been used as a cop-out for not creating a quality product. All the ground work for a good platform game is here. It’s stable, it handles well, I didn’t encounter any bugs or crashes. However the presentation is lack luster and the level design is a bit uninspiring. As a personal project or a practice in making games it’s perfectly fine, however it’s not really a product that can compete in the Nintendo eShop alongside the large array of retro and modern platform games currently available.

Epic Dumpster Bear can be beaten relatively comfortably within around four hours if you just head from start to finish and do not get too caught up with the bonus stages. Attempting to score 100% will probably add a few more hours to that total, although I can’t imagine too many people willing to play it for this long. I personally got a bit bored after the first hour and a half and anything after that felt like a bit of a slog. It’s relatively cheap at just £4.99 in the UK, so it isn’t bad value if you’re desperate to try something new, but in my honest opinion you’re probably better off spending that £4.99 in the virtual console store.