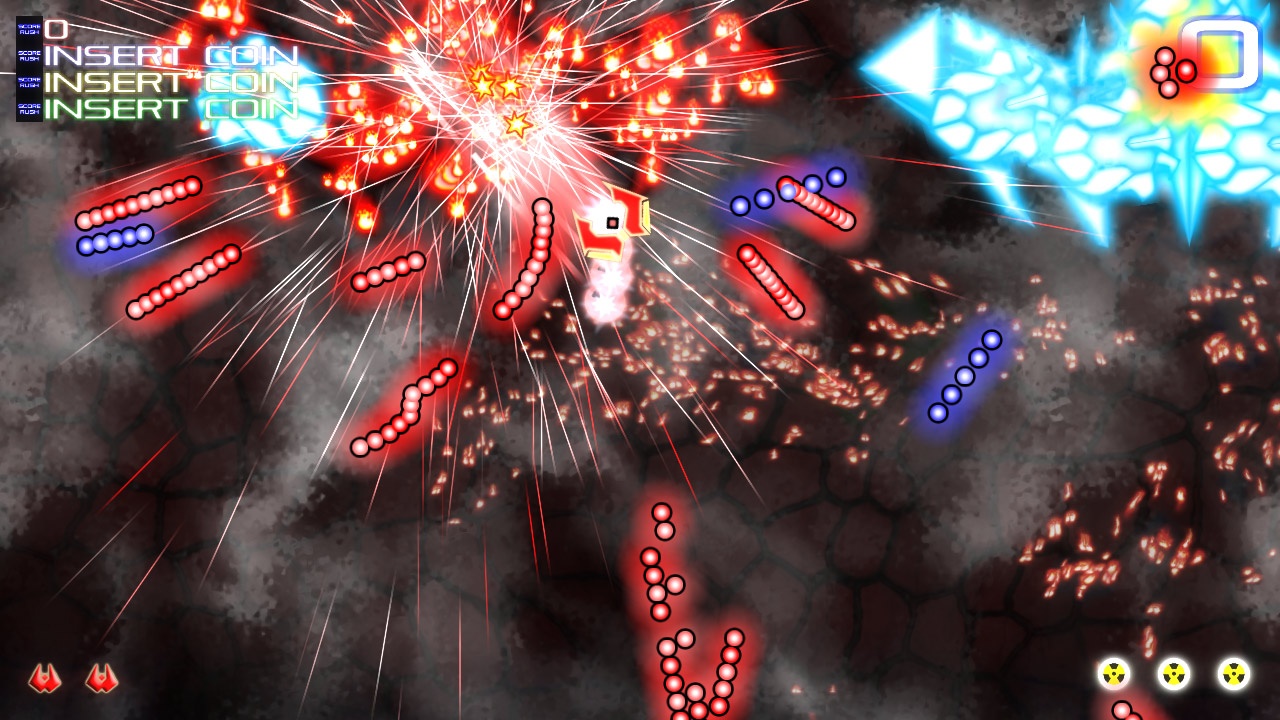 Xona Games’, Score Rush Extended does not make a good first impression – the menu is garish, the art work is ugly, even the font somehow screams budget title. When the game actually starts, things aren’t much better; there are no options of note, the ships are nondescript neon blobs, the background is a black haze and the enemy ships are bland and forgetful. As I said – a bad first impression.

This all matters for, oh, I don’t know, about 30 seconds or so. Despite its horrendously budget presentation, the stripped back, fast paced and outrageously addictive gameplay soon come to fore as any issues one might have had with the games’ visuals begin to fade into the background as you become engrossed in what has to be one of the finest scrolling shooters in recent memory.

I fail to specify the type of scrolling shooter it is because, well, it’s actually rather hard to tell. I’m pretty sure it’s a horizontally scrolling shooter for the most part, but whether the screen be scrolling vertically or horizontally, when it comes down to the core mechanics, Score Rush Extended actually has a lot more in common with Geometry Wars than it does with Ikaruga or Gradius. Not only does it share an aesthetic similarity with Bizarre Creations’ classic twin-stick shooter, but despite their being a greater sense of traversal here, it actually plays out in a very similarly to vein to any number of fixed screen shooters.

Essentially, what you have here is a pared back coming together of Japanese and more traditionally Western shooters, combining to create an experience that is simplistic and straightforward enough for genre newbies to enjoy while delivering more than enough in the way of challenge to keep the hardcore busy in the long run. 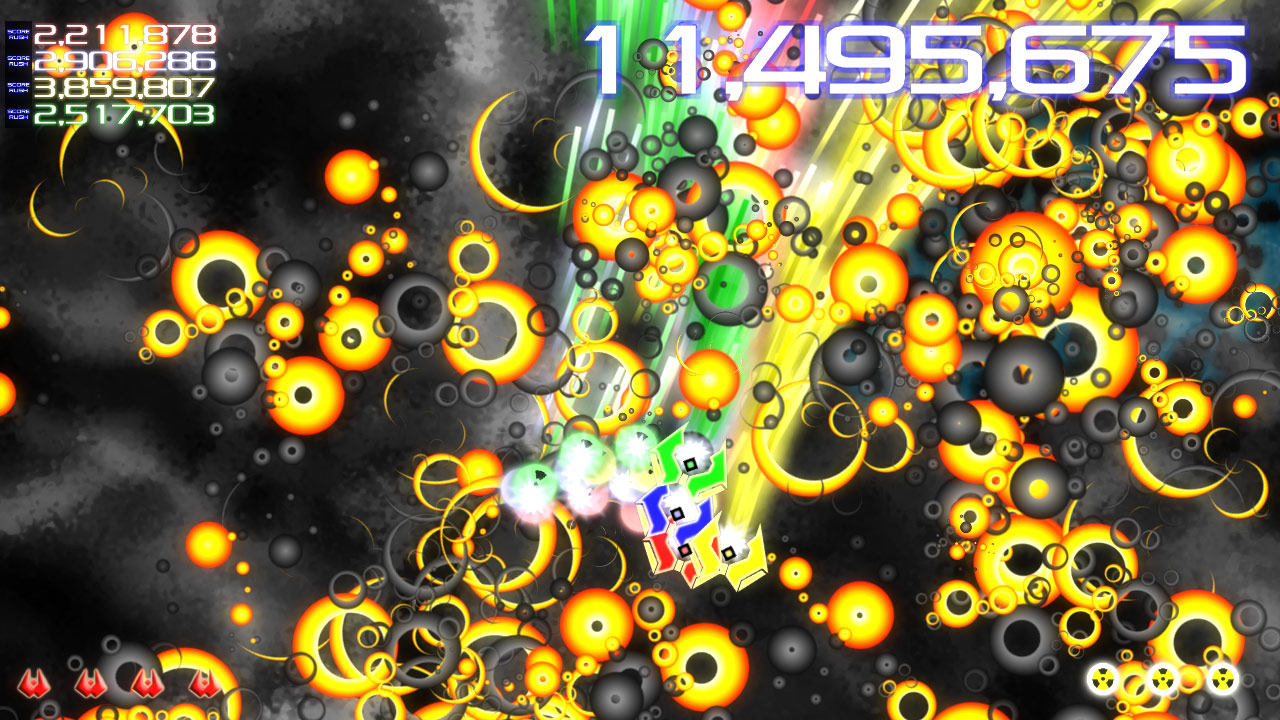 It might look initially imposing to those unfamiliar with the world of Japanese bullet hell shooters, but Score Rush Extended, despite having a somewhat high level of difficulty, is provided a sense of accessibility by the sheer simplicity of its mechanics and scoring systems. There are no complex combos here, no bonus points and no special weapons or unique mechanics. That might sound off putting to some, but in practice, this simplicity provides a sense of purity that makes for an incredibly addictive experience for both casual and hardcore fans of the genre.

When it comes to the actual gameplay, your only options are to shoot, fire one of your three available bombs and to slow the movement of your ships for more precise movements. It is the latter of these that proves one of the games’ few revelations. With bullets coming at you from all angles, it’s amazing what the ability to slow your ship has on your tactical approach to combat. Suddenly, making your way through a seeming unassailable wall of bullets is made a lot more manageable by the tiny adjustments that you can make once you slow your ship to a crawl.

It’s not just about dodging enemy bullets of course; beyond the stingy selection of bombs available to you, power-ups are plentiful and incredibly rewarding. Your abilities never go beyond the standard blaster, but man, what a blaster. Starting as a wimpy stream of bullets, your firepower soon expands into a devastating wave that makes you feel like a genuine match for the myriad of enemies eager to take you down.

While the online options are limited to the always addictive leaderboards, there are a few other game modes beyond the standard arcade mode to provide a little bit of longevity to an otherwise very basic package. Dual play offers an interesting alternative for the most hardcore of players as you are given control of two ships at the same time. It’s a bit much for me (and the majority of normal human beings), but for those looking to really challenge themselves or, y’know, show-off online, dual play provides a brilliant opportunity to test ones’ skills. 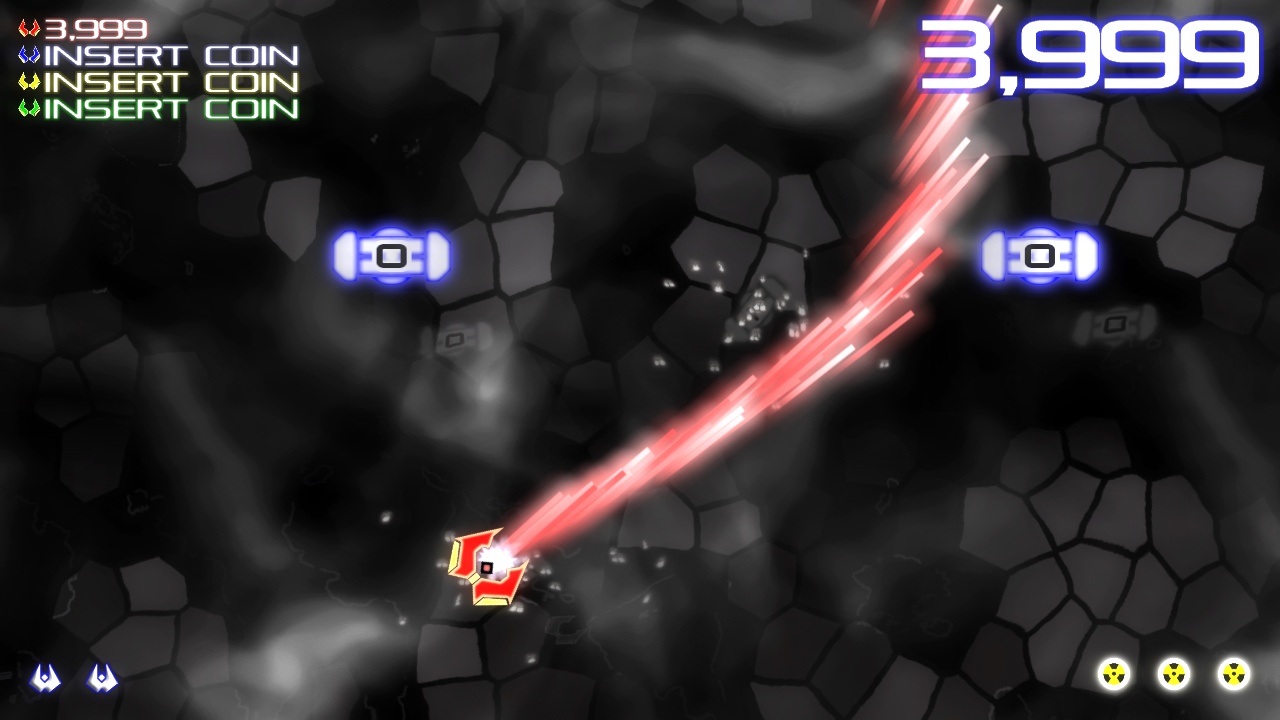 There is also local multiplayer for up to four player that, while running surprisingly well given the levels of mayhem on screen, soon becomes incredibly messy once power-ups are thrown into the mix. It’s playable (just about), but honestly, it’s more of a curio, one that inevitably loses the simplistic purity of the single player experience.

The stripped back mechanics and simplified gameplay might not be for everyone, but few shooters manage to appeal to both a Western and Japanese audience while somehow delivering an experience that is as fun for the casual gamer as it is for the hardcore. Yes, it’s ugly as sin and there is little to differentiate the first hour from the fifth, but when you’re in the zone and chasing a highscore or nudging your way up that ever-addictive leaderboard, looks really don’t matter. It may well look like a budget title, but when it comes to gameplay, Score Rush Extended is an undoubtedly triple-A experience.