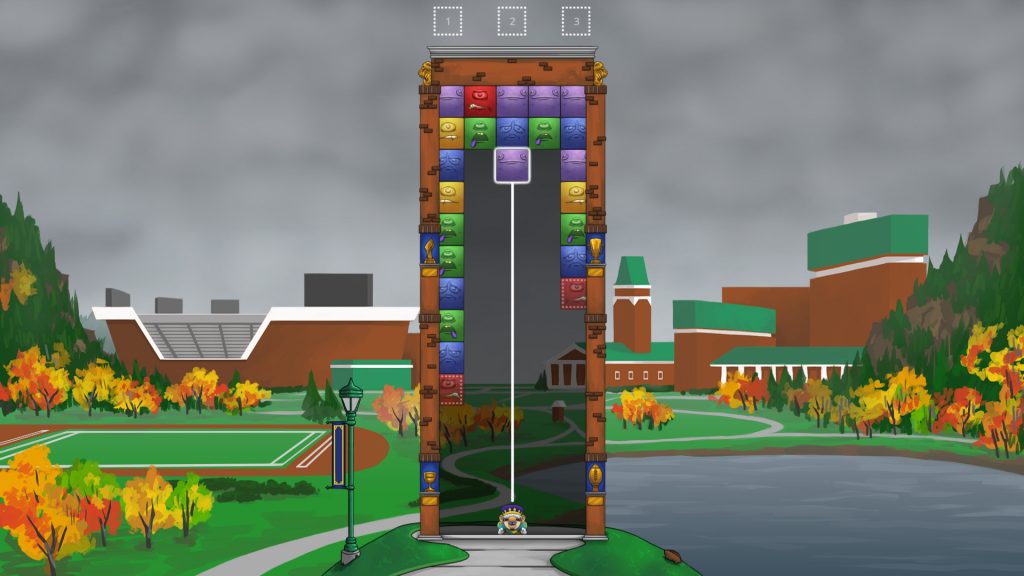 Honestly, when I started up Ty Taylor and Mario Castaneda’s Tumblestone, I feared the worst. A rather expensive match 3 puzzle game by today’s standards, this aesthetically ugly and initially very simplistic puzzler does not provide the most positive of first impressions. Imagine my shock then when this turned out to be one of the finest puzzle games I have played in years and proof that, despite mobile dominance of the genre, there is still a place on home consoles for well-made match 3 title.

In a world in which the incredibly slick likes of Candy Crush Saga are free to download on just about any mobile phone in existence, it’s initially hard to justify the relatively high asking price of Tumblestone. It’s something that the game is likely to struggle with, but with plenty of content and nothing in the way of limited lives and paid for bonus items, I for one found it surprisingly refreshing to play a match 3 game in which I wasn’t constantly thinking about the number of lives I had lost for fear of having to cough up additional cash to keep playing. I appreciate that Tumblestone asks for your hard-earned cash right out of the blocks, but I for one would prefer to pay for a game straight up rather than having to struggle through that odd financial relationship that I tend to have with the ‘free-to-play’ games that I enjoy. It might be different for others gamers, but I for one don’t want to be thinking about money while I’m playing a video game. Making financial decision in the middle of a gaming session tends to suck the fun out of the experience for me.

Money aside though, the above discussion would be all but pointless if the game wasn’t worth playing, but again, despite those ugly ass visuals, this unquestionably stands as one of the finer examples of the genre. While the fundamentals are extremely straight forward in that you fire at the coloured blocks on-screen with the aim to clear three in a row, due to the fact that you do not have blocks to fire yourself and are instead working on a pre-defined and non-changing puzzle, the array of fail states are subsequently multiplied with dead ends often appearing six or seven turns into a round. 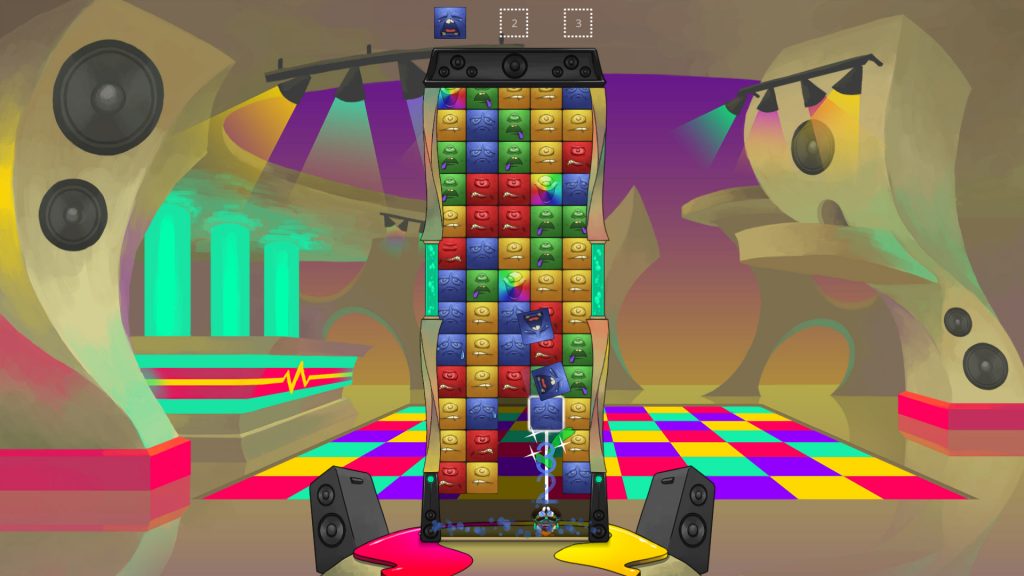 That might sounds potentially frustrating (and in fairness, the game does have its moments), but for the most part, Tumblestone feels like an array of small puzzles that can all be beaten by careful planning and persistence. Persistence alone will undoubtedly see you through the majority of the games’ 400 odd campaign missions, but if you’re going to complete this game with any sense of finesse, and perhaps more importantly, be competitive when playing against friends, you’re going to have to start planning ahead. Rather than simply clearing the blocks immediately in front of you, here, you have to start thinking about the next three of four rows down the line lest you run into yet another dreaded dead-end and have to start the whole puzzle from scratch.

The gameplay will be immediately familiar to anyone with match 3 experience, which thanks largely to mobile gaming, is just about everybody on earth, but due to this simple but incredibly effective change in focus, Tumblestone feels like a surprisingly unique experience despite its rather derivative visual style. Well, I say derivative, but in truth, it’s really more ugly than derivative. Yes, I know that nobody cares about the story in puzzles games, but man, those cut scenes are offensively unappealing. It surprising too as, Ty Taylor and Mario Castaneda’s last game, The Bridge, looked absolutely stunning; a game that was awash with the kind of aesthetic charm and imagination that is totally lacking here.

Still, as ugly as it might be, all is quickly forgotten once you start-up the games’ exemplary selection of local multiplayer options. While there is nothing particularly new here, the unique gameplay will often see matches turned on their head as those in the lead hit unexpected brick walls and have to start over again. Personally, I’ve never had such a, ‘Tortoise and the Hare’ gaming experience. There are benefits to both approaches, but it’s still genuinely exciting when a slow and steady Tortoise suddenly finds themselves in the lead after the Hare falls flat on its face mere inches from the finish line. 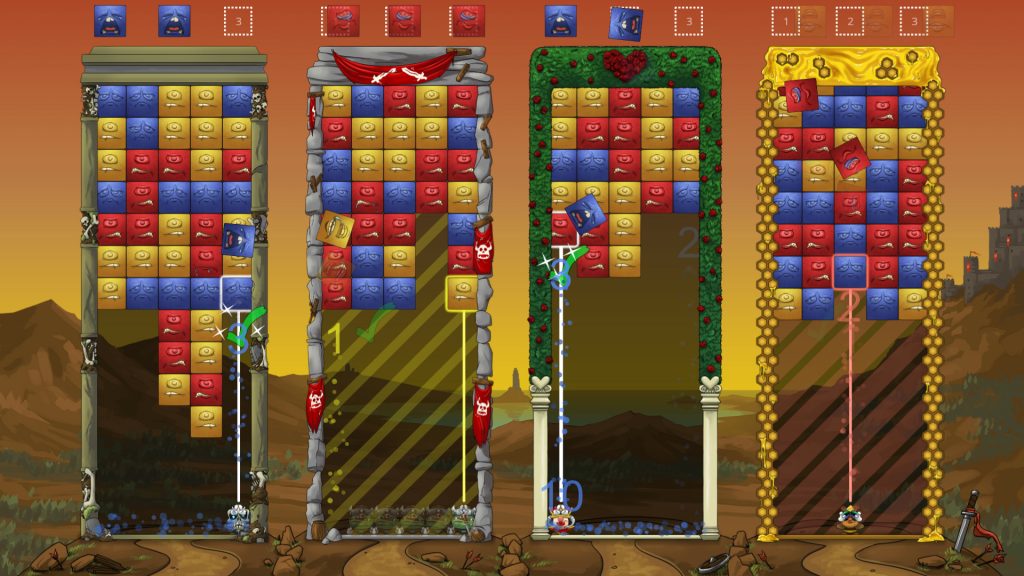 The core concept alone makes the four player local multiplayer a riot, but with three solid game modes to choose from, Tumblestone has enough content to make it one of the better party games available for the Wii U. Puzzle Race is the most straightforward of the bunch in that you simply race each other to clear the puzzles in the quickest time possible. The other two however are much more interactive with Battle Mode seeing cleared blocks swapping back and forth between players and Tug of War seeing entire sections being moved between players as they are cleared. While Battle Mode probably represents the most enjoyable of the three, all are enjoyable in their own right with four player battles proving especially enjoyable thanks to those last-minute failures that make this game feel quite as unique as it does.

It might be relatively expensive and it’s certainly as ugly as sin, but despite these seemingly major issues, Tumblestone remains one of the finest match 3 games in recent memory. With its unique puzzles and requirement to plan so far ahead, Tumblestone asks that you approach each puzzle carefully while delivering enough in the way of immediate thrills to make it simultaneously fast paced and surprisingly cerebral. The Campaign is certainly content rich and offers plenty of challenge for fans of the genre, but make no mistake, Tumblestone is at its best when played with friends. It might not get the recognition it deserves, but this charming and hugely addictive puzzler is one of the surprise multiplayer highlights of 2016.