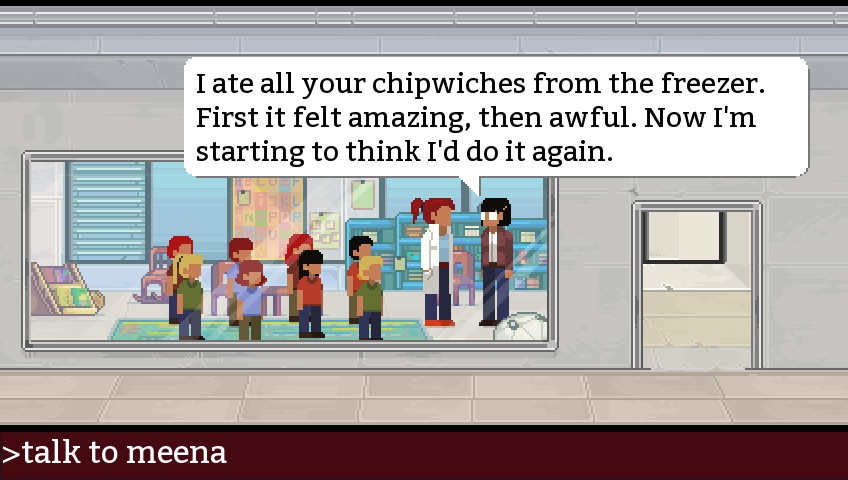 Old school adventuring has enjoyed a bit of a resurgence in previous years, and sci-fi mystery K Station is even more old school than most. Rather than being a standard ‘point and click’ adventure game, here in K Station there’s no mouse control – you can walk around with the directional buttons on your keyboard but any actions have to be manually typed in. It’s a bit of a shock to the system at first but it adds a refreshing element to an already inventive and humourous game.

Set just over 300 years in the future, the titular K Station is a scientific research station and home to hungover protagonist Maya. Things start off (relatively) normal as you explore your environment, attempting to interact with any objects and other characters as you would in most adventure games. However it’s not long before something… strange… starts to happen. And considering this is a station where a portable time machine is part of the standard lab equipment that’s saying something. As the station and people within it begin to change it’ll be up to you to work out what’s going on. 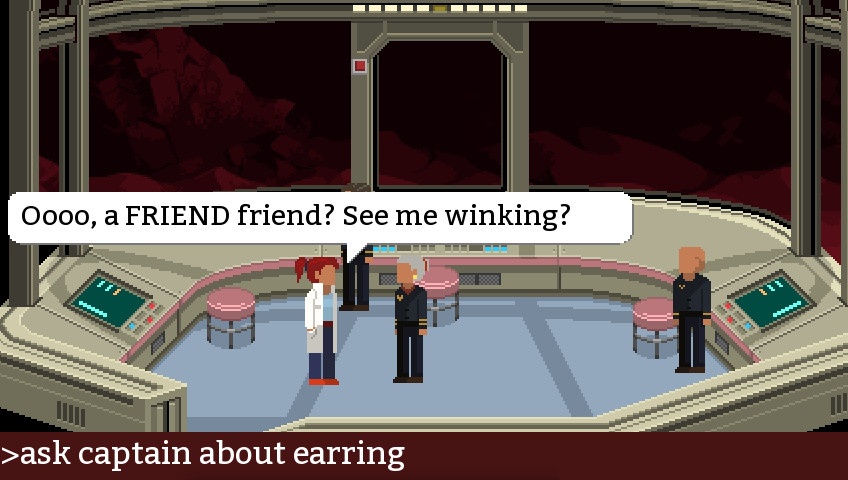 While the storyline is fairly unique its the sense of humour and dialogue that is most memorable here in K Station. Genuinely funny and well written I found myself smiling throughout, and the fact you have to specifically ask characters about topics rather than simply choosing the next conversation option as you would in most adventure games. It also means you’ll have to concentrate and think more than you might otherwise, as traditional adventure tactics (like clicking on everything in sight and combining all objects) won’t always work here. However it does also amplify the main flaw of most adventure games – that frustrating moment when you become completely stuck. There is the option to simply type ‘hint’ at any time for a general clue on how to proceed, but even with this feature I found myself with no idea how to proceed on one more than occasion.

The graphics are less innovative than other aspects of the game with a retro pixel art styling – personally I’m a major fan of pixel art but it may put others off. But even with the limited animations, and lack of faces, there’s still a remarkable amount of personality in each character thanks to the quality of the writing. Maya herself in particular is a wonderful balance of sarcasm and quirkiness – in a way I’m glad there’s no voice acting as it would take some exceptional delivery to her justice. Admittedly though K Station does suffer a bit in the audio department with only some basic ambient music in the soundtrack department.

But considering this is all the work of a single, self-publishing developer it’s perhaps understandable that there would be some limitations. Still though, it’s the inventive puzzles and sense of humour that are the real stars here and in that respect K Station is a great success.

Certainly it could do with being a bit longer, and some extra hints would be useful, but the typing-based command scheme adds a whole extra facet to an already impressive indie title and it’s one I can heartily recommend.