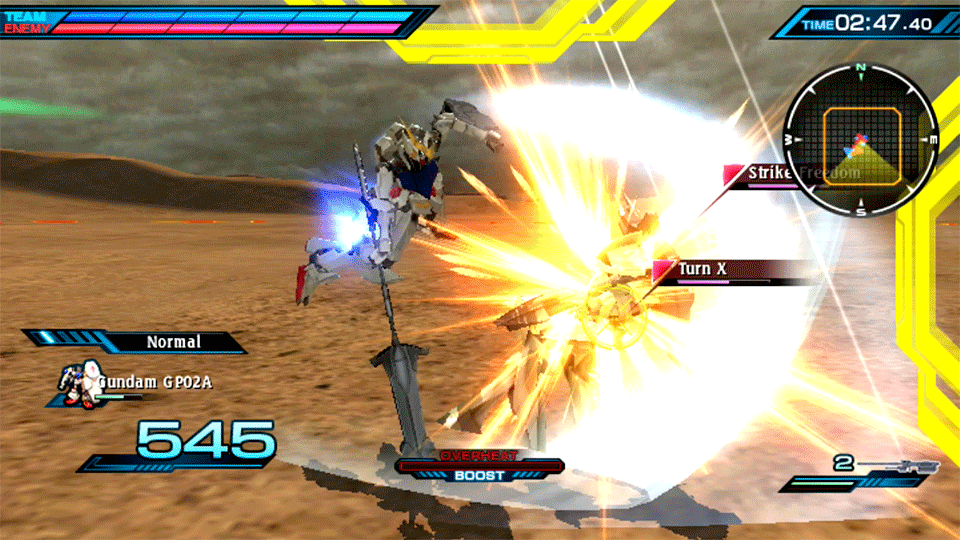 Despite this being the first of the long running, ‘Extreme VS’ series to makes its way to the West, I actually had my first experience of this relatively simplistic but hugely enjoyable Gundam spinoff a few of years ago when visiting Japan. After seeing it played in a huge number of arcades, I decided to pick up a copy of, Mobile Suit Gundam: Extreme VS for the PS3. Despite not being completely au fait on Gundam lore, I knew enough to enjoy the absurd narrative and quick fire gameplay. While clearly aimed at fans of the Gundam series, Extreme VS is perfect for anyone with fond memories of late 90s / early 00s arcade gaming, and while the PS Vita’s, Mobile Suit Gundam Extreme VS Force is far from the best that the series has to offer, it has that brilliant core gameplay fully intact, and if nothing else, delivers a content rich single player experience.

Some might find the fundemental, Extreme VS gameplay a tad too simplistic, but as a fan of arcade gaming, I found the accessible but surprisingly nuanced gameplay perfectly balanced. Like an up-scaled, licensed, and dare I say, better looking version of Sega’s beloved, Virtua On, Mobile Suit Gundam: Extreme VS represented just about everything that I love about Japanese arcade gaming; it’s big, ridiculous, colourful, fun, and above all else, as mad as box of frogs.

Problem is, while the gameplay has made the transition from home console to PS Vita without issue, Extreme VS Force is lacking many of the features and much of the content that fans of the series will have previously taken for granted. Yes, Extreme VS Force has only 30 or so playable Gundam suits compared to the 100+ of previous releases, but the biggest and undoubtedly most egregious omission has to be that of online play. For a game that is largely built upon the thrill of competitive 1 vs. 1 and 2 vs. 2 gameplay, the complete lack of online options feels like a horrendously missed opportunity and a clear sign that the game was rushed towards its initial Japanese launch (the original Japanese version didn’t even have a standard Vs. Mode – something that has at least been added for the Western release).

After playing, Extreme VS in Japanese arcades and duly having my ass handed to me, one could argue that the loss of online play has saved me from a rather severe beat down, and while that might be true, there is no getting around what a disappointment this really is. The reduced number of Gundam Suits will inevitably disappoint some, but honestly, 30 is still plenty, and with so many unique abilities and playing styles, I for one didn’t mind the more manageable number of playable Suits. The Multiplayer though? Yeah, that’s a stinker. I rarely play Vita games online, but Extreme VS Force is a perfect match for online combat. Local multiplayer available but, unless you live in Japan, finding anyone to play will likely prove all but impossible. 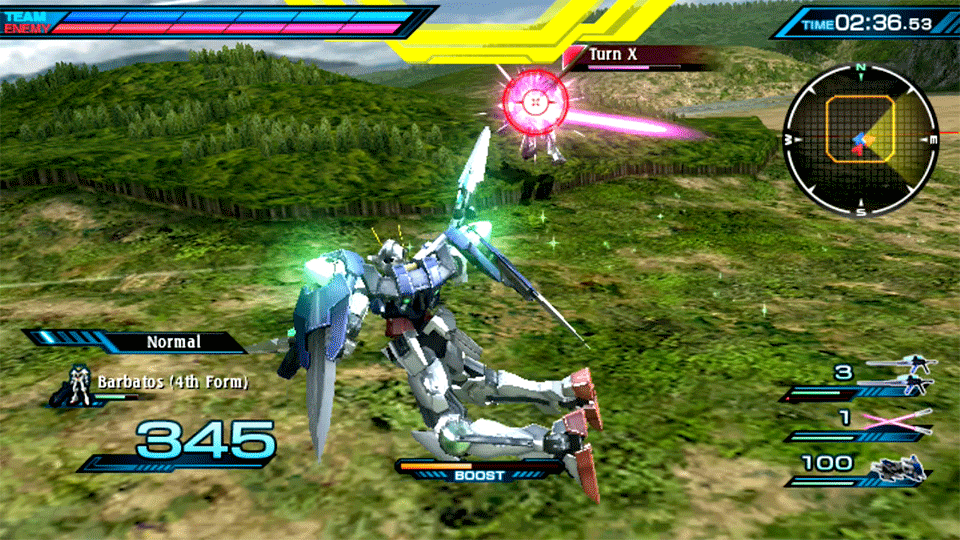 Still, while the complete lack of online play is a bit of a shocker, the game does make up for it via its surprisingly robust single player options. The tutorial is admittedly somewhat disappointing, but the gameplay isn’t hard to grasp and you’ll soon find yourself tearing around some of the most famous locations and battles from Gundam’s long and illustrious history. Playing out as an AI recreation for future missions, you are essentially taken through the biggest and best battles from Gundam’s past, and while the story itself is a little thin on the ground, as a more casual fan, getting this ‘best of’ recap of famous battles from the series’ past proved largely enjoyable.

While the majority of combat is made up of straightforward, destroy all enemy encounters, the story does throw in some minor tactical options that include base management and control over simplistic infantry units that you can set on fixed paths towards a set objective. They don’t change the game all that much, but they do give you something to think about beyond the core combat.

The same is true of the side missions that offer up a selection of additional tasks that can be completed for Haro medals. Beyond giving you something else to do during standard missions, these Haro medals unlock extra missions, suits and units and thus provide more than a simple box to tick during missions. With a decent selection of mission types and some fantastic boss battles, there is plenty to keep single player enthusiasts busy for quite some time here, and while it doesn’t quite make up for the lack of online multiplayer, the quality of the experience certainly lessens the blow. 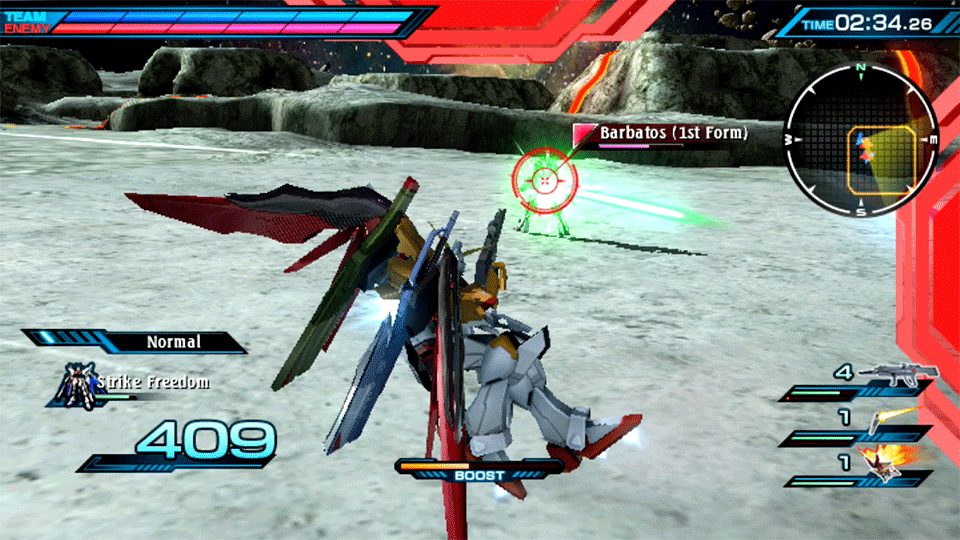 Beyond the content available though, what really shines is the combat. The basic controls might seem initially limited, but like Virtua On before it, the depth and subsequent learning curve comes from knowing how and when to use your abilities. Be it a dash, a block, a special move or simple light and heavy attacks, timing your moves and knowing when to go on the offensive is key to success here. With each suit feeling pleasingly unique and each being geared around ranged attacks, quick fire combos or labouring big hits, finding the Suit with the right balance proves half the fun. Whichever suit you go for though, once in battle, the combat is slick, fast paced and brilliantly addictive. Some might write it off as Dynasty Warriors without the armies, but to do so would be a disservice to what is a fundamentally brilliant battle system.

While there are certainly technical limitations due to its place on a handheld console, the Vita once again shows off its impressive horsepower by delivering a fast paced and largely gorgeous looking brawler, one that suffers very little in the way of slow down despite the large amount of action going on at any one time. The locations themselves might be somewhat bland, but the Suits all look suitably spectacular. Each is imbued with an impressive level of detail and a collection of highly dynamic animations. It’s not the most visually impressive game on the Vita, but with the console falling back on smaller indie titles in recent years, it’s good to see that Sony’s horrendously underappreciated handheld can still handle large scale triple-A visuals and continue to impress on a purely technical level more than four years after its original release.

The lack of online competitive play is a major and hugely disappointing omission, but honestly, I’m just glad to see an Extreme VS title finally make its way to the West. It’s not the best game in the series by any stretch of the imagination, but that fantastic, fast paced, arcade-style gameplay is fully intact with Mobile Suit Gundam Extreme VS Force delivering one of the most enjoyable gaming experiences I have had on the Vita in quite some time. Some might find it initially simplistic, but dig a little deeper and you’ll soon find a surprisingly nuanced brawler, one with plenty of variety across its 30+ roster of impressively detailed Gundam Suits. That depth is somewhat dulled by the lack of online competitive play, but with an extensive single player campaign to get through and a host of challenging side missions to complete, there is still plenty here for fans of the series to sink their teeth into.