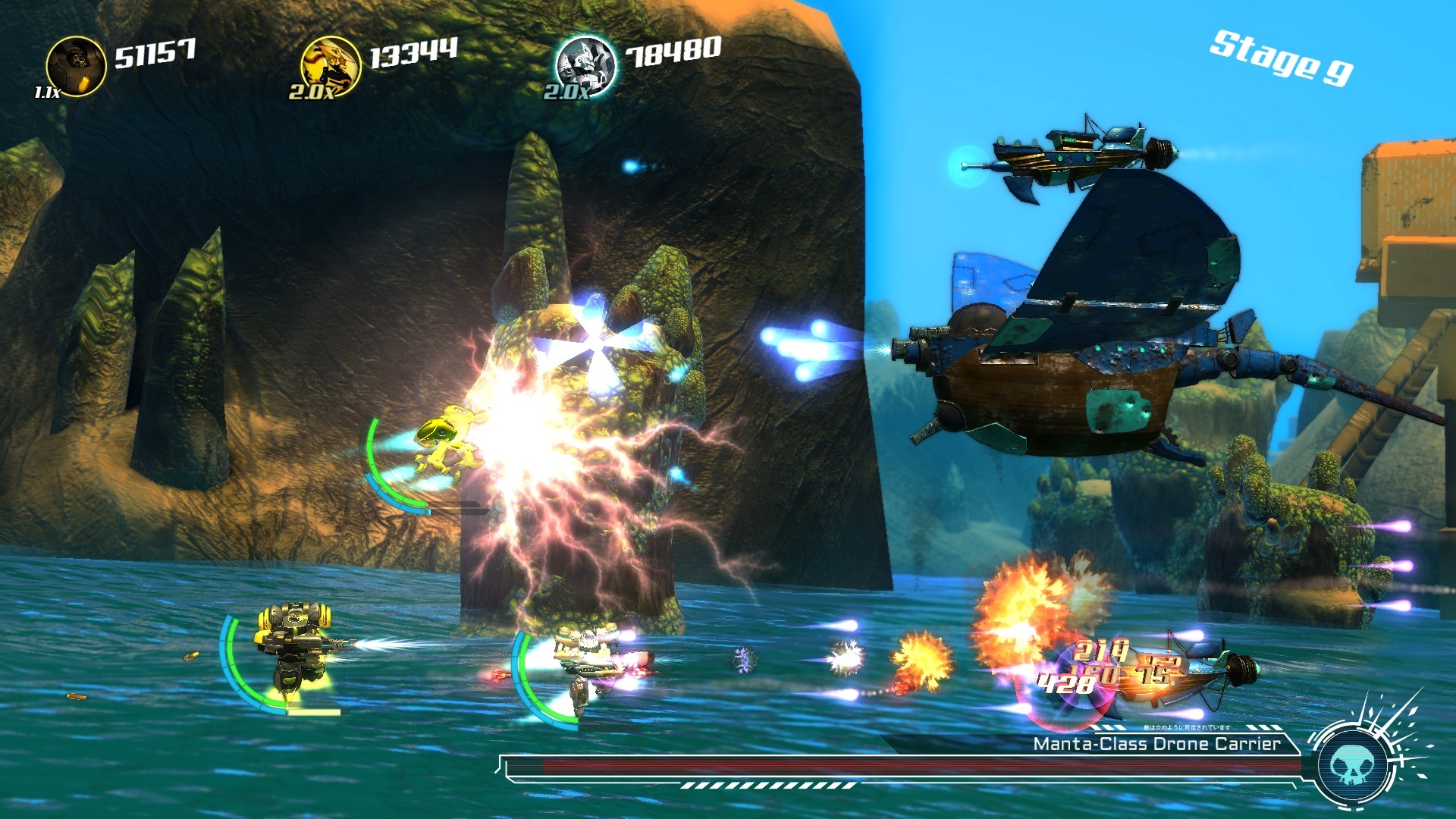 An anime inspired, mech-based side-scrolling schmup. I know what you’re thinking; Stardust Galaxy Warriors: Stellar Climax couldn’t sound anymore Finnish if it tried. Wait? What? Finnish? Yeah, despite this being the most Japanese video game of all time, it was actually made by small Finnish developer, Dreamloop Games. Go figure.

So yeah, not as Japanese as the title, gameplay, genre, visuals and audio would suggest, but I tell you what, this obviously talented team have taken the fundamentals of the side-scrolling shooter genre and created something genuinely brilliant. By embracing the core gameplay that the genre is famous for and combining it with a huge number of options and some fantastic 4 player local co-op, Dreamloop Games have managed to create an experience that feels both immediately familiar and inarguably unique.

With three game modes to choose from, Stardust Galaxy Warriors: Stellar Climax lets you choose one of five anime-inspired mechs to take into battle. While each of them fundamentally control in the same way, they all have their own unique special move. More importantly though, each can be personalised with their own set of primary and secondary weapons. This essentially allows you to create a mech based upon your own play style with the option for local 4 player co-op leading to an abundance of choice and a wealth of unique attack patterns when you have the full quota of friendly mechs in play. It invariably gets very busy with so many players on screen, but with each mech clearly identifiable and the game rarely suffering slow down, it’s amazing how well the 4 player co-op works in practice and how much it subsequnetly adds to one of the medium’s more traditional genres. 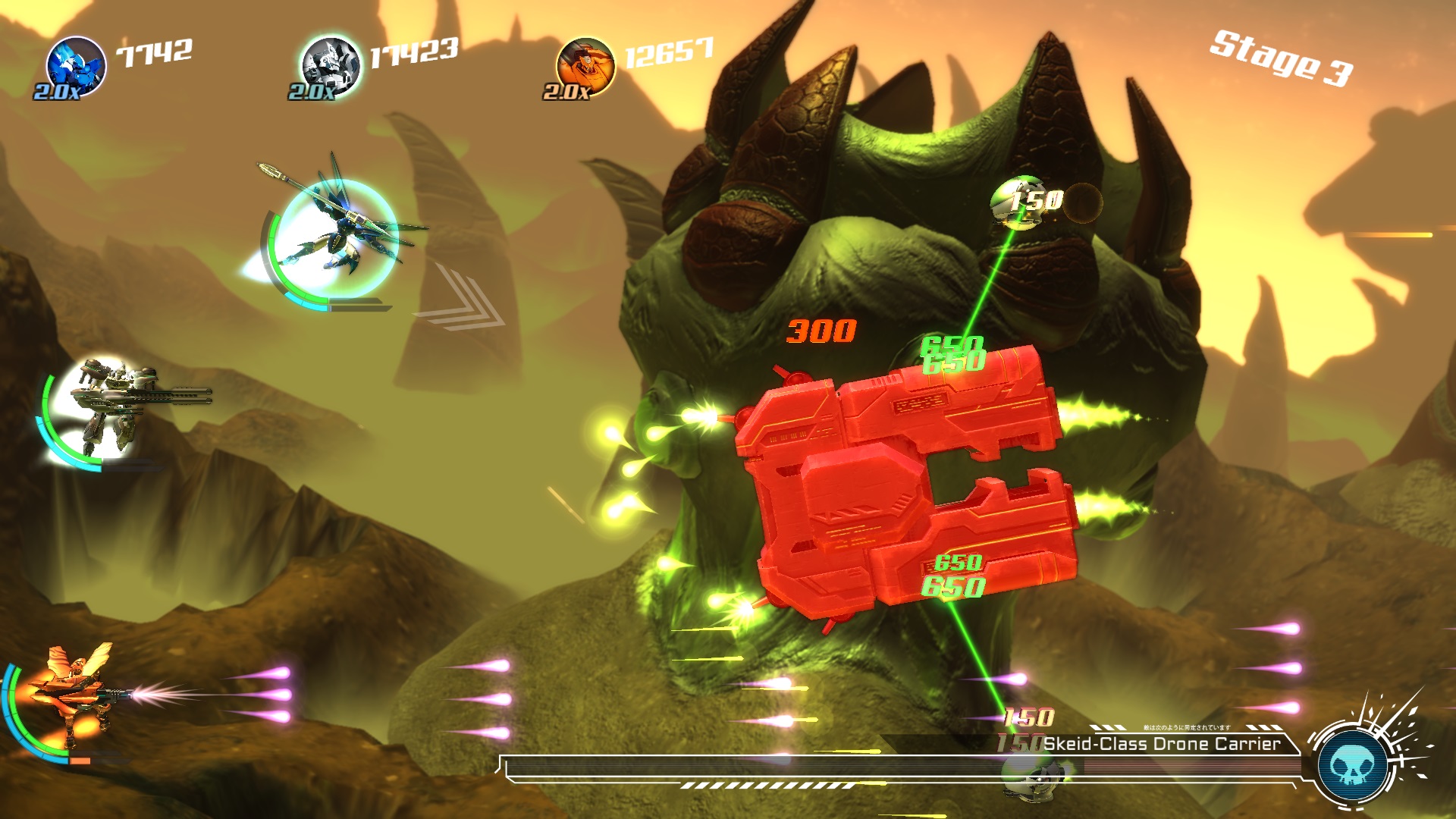 It’s true that the addition of all of these options and the subsequent mayhem of 4 player co-op ensures that the gameplay lacks the carefully constructed grace of a Gradius V or a Dariusburst, but as a more light hearted, easy to pick up and play take on the genre, Stardust Galaxy Warriors: Stellar Climax provides a genuine alternative to its more po faced brethren. In many ways, it’s kind of like the Marvel vs Capcom to Gradius’ Street Fighter II; it lacks the finesse of the genres finest, but it never lacks for fun or spectacle.

Still, while it is one of the more forgiving shooters on the market, that’s not to say it’s without a challenge. In fact, this game is about as hard (or as easy) as you want it to be. With an almost outrageous nine pre-defined difficulty setting to choose from along with a wealth of sliders and additional options to create your own custom made difficulty setting, Stardust Galaxy Warriors: Stellar Climax can be turned into an absolute cake walk or the very definition of bullet hell. What’s most surprising is how enjoyable it is at either end of the spectrum. Blasting away at gormless enemies with a group of friends is probably more fun than it should be while the core gameplay, tight controls and solid bullet patterns ensure that it can be enjoyed equally at the more hardcore end of the spectrum. Again, it never matches the subtlety or craft of the genres finest, but then, that’s not what it’s going for.

Rather than following in the footsteps of the genre heavyweights, Stardust Galaxy Warriors: Stellar Climax puts more of an emphasis fun, choice and upgrades. The RPG mechanics are basic, but between the end of level upgrades and the robot shop thing, I found the lure of a fully upgraded mech oddly compelling. Yes, it’s fun to chase high scores and the such, but for those unfamiliar with the genre, it’s these kind of options that will help ease them into what is traditionally known as one of the most hardcore and unforgiving genres around. 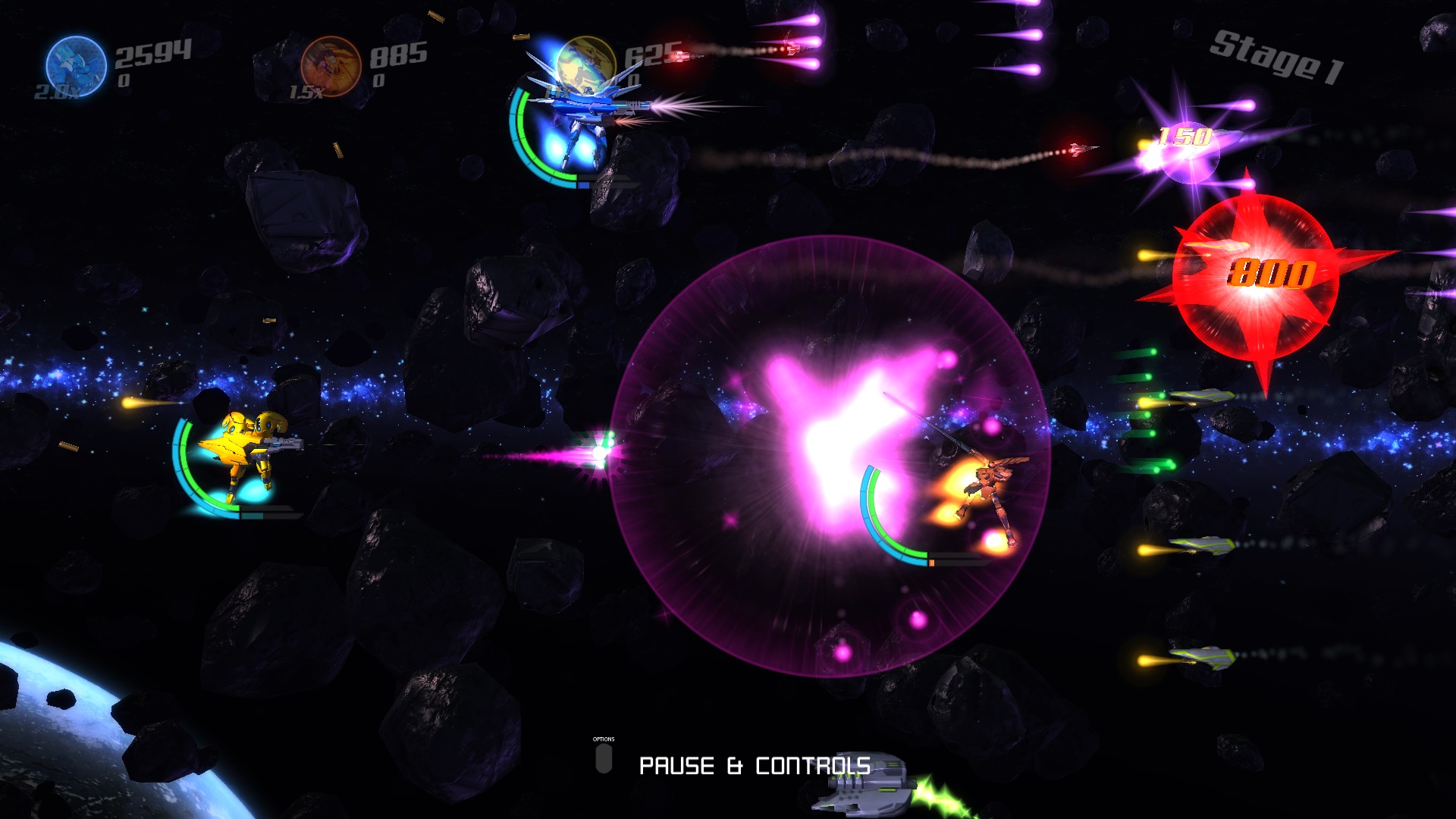 Beyond the 10 stages that make up the decent-sized campaign, Stardust Galaxy Warriors: Stellar Climax is also home to a Gauntlet and Challenge mode. While both play second fiddle to the nonsensical but largely enjoyable campaign, they both offer an decent secondary challenge for those looking to further test their abilities. Like the campaign, both allow the option for up to 4 players to take part, and with the challenge quickly escalating in each, team work and revives quickly become increasingly important. The stages used are taken from the campaign, but in the heat of action, the escalating challenge proves incredibly addictive when experienced with like-minded players.

While the mechs themselves look great, the stages are actually rather bland, and while some will find the irreverent humour charming, I for one found it a tad annoying, but honestly, these are minor issue with what is an otherwise outstanding side scrolling shooter. With its exemplary 4 player co-op, slick gameplay, cool mechs and array of options, Stardust Galaxy Warriors: Stellar Climax proves a genuinely thrilling alternative to the more established genre giants. It lacks the finesse of its more celebrated compatriots, but what it lacks in refinement, it more than makes up for with fun. It might have been developed in Finland, but this is a resolutely Japanese experience, and in an age when we are seeing less and less output from the land of the rising sun, it’s good to see someone else taking up the slack.