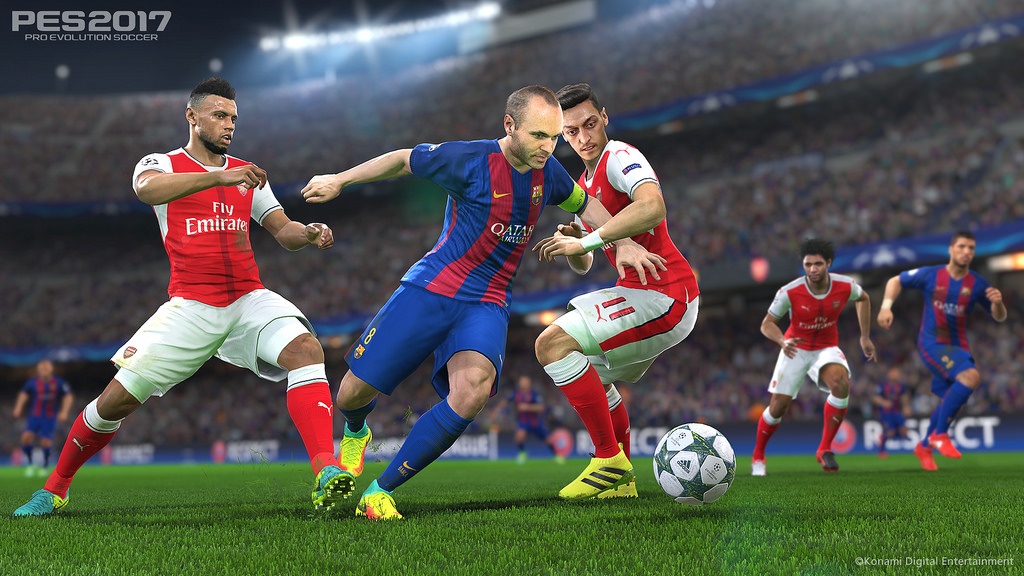 It’s impossible to talk about PES 2017 without mentioning FIFA 17, so you know what, I’m not even going to try. After all, when it comes to the yearly battle between the two football heavyweights, that’s all that really matters – which one is better. As usual, there are the Pro Evo and FIFA diehards who cannot be swayed, but in recent years, thanks largely to Pro Evo’s meteoric return to form, there is a growing band of the undecided, those waiting to see if Pro Evo is good enough to overcome its now infamous licensing issues and climb back atop the perch it once called its own.

So, is it better that FIFA 17? Well, in terms of sheer gameplay, the simple answer is yes……and by quite some distance. Honestly though, Pro Evo has been a better football game for the last few years, and if anything, thanks to improvements in FIFA 17’s gameplay, it’s arguably a closer call this year, but yes, true to form, and as their slogan so proudly proclaims, the pitch most certainly remains theirs.

Despite the rough edges that are all but customary at this point, this is undoubtedly the best Pro Evo of modern times and, if you’re willing to remove those rose tinted glasses (I know, it’s tough), almost certainly the finest game is the series’ history. It’s more of an evolution than a revolution, but the additional polish, added physicality, much improved keepers and refined animations all combine to create a genuinely exceptional experience

The strange thing is, I’ve heard a lot of Pro Evo 17’s critics refer to the gameplay as being the more ‘arcadey’ equivalent to FIFA’s supposedly unnerving simulation of the beautiful game. I never really got that, and based on what I have experienced of FIFA 17 thus far, this seems further from the truth than ever. Both are attempted simulations in my mind with the only difference being Pro Evo’s greater comfort with its position as a video game. It’s something that has always enamoured me to the series and something that ultimately makes the difference once again. Sure, FIFA 17 has spectacular animations, but as is so often the case, they don’t marry up with the gameplay as successfully as they do in Pro Evo (if anything, FIFA 17 is detrimentally over-animated). The team at Konami have always been great at finding that line between realism and playability, and here, that balance has been achieved more successfully than ever before. This is football as you know it, but it is football knowingly and carefully created for a 10 minute match. 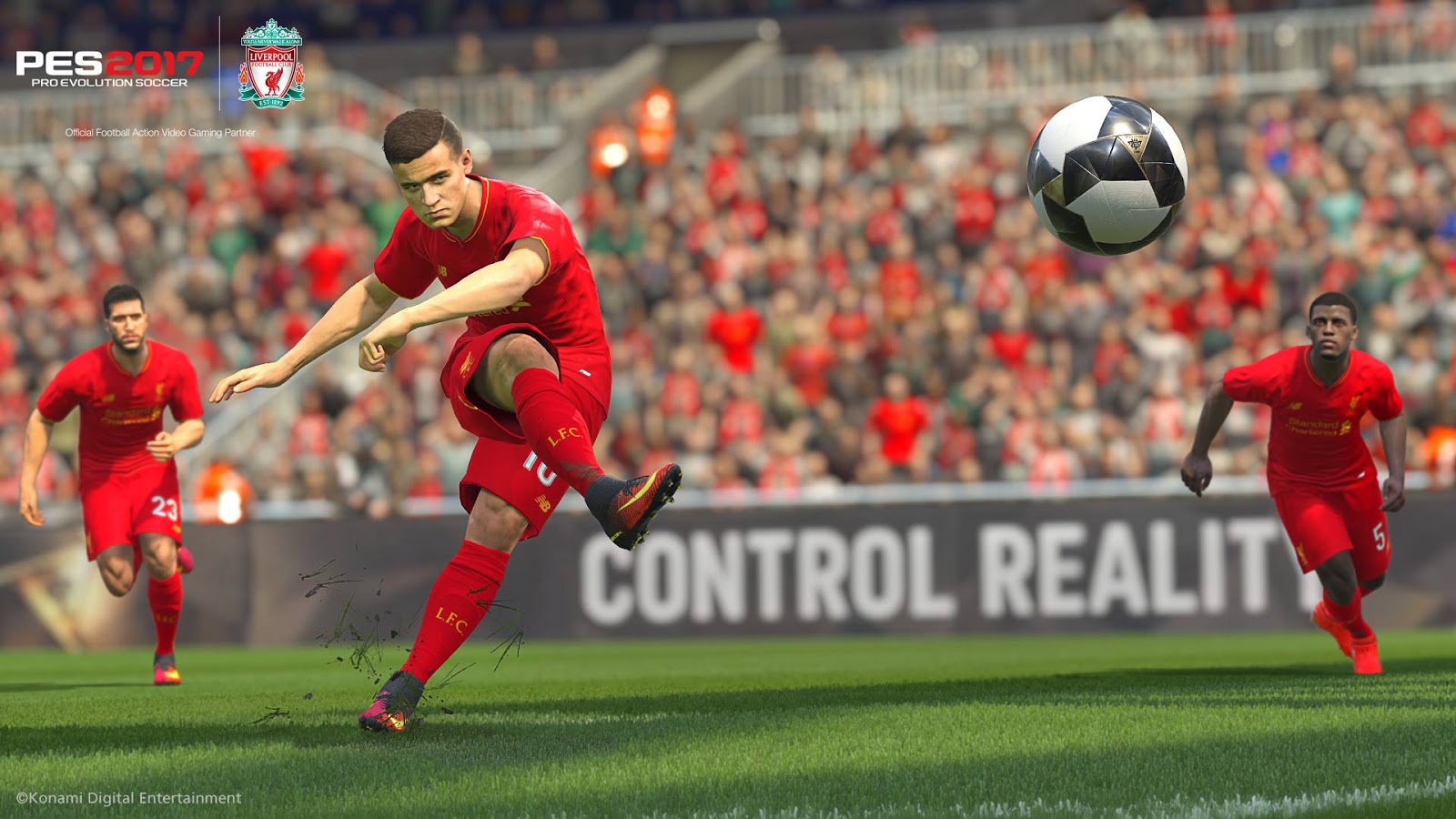 That doesn’t mean that the game is played at a million miles per hour of course – far from it. If anything, this is a decidedly slower, more considered experience than its predecessors with as many of the games’ highlights coming in the middle of the park as in front of goal. The feeling of weight that comes with a well struck shot still can’t be matched, but those tactical battles in the middle of the park are more pronounced and carefully constructed this year. There are still moments of individual magic to be had, and as always, individual player skills are brilliantly pronounced, but more than ever, this is a team game that benefits those who take a more tactical and structured approach.

If you’re a fan of tiki-taka football or the more intense gegenpressing game, the options to play your own way are both plentiful and hugely impactful. Whether it be dealing with another teams’ tactics or implementing your own, games between evenly matched players can genuinely come down to the correct tactical choices being made before and during the game. With the improved AI now making the runs you would expect of your chosen approach, you really do have the ability to build both your team and their subsequent playing style in your own image.

As great as things might be on the pitch, inevitably, it’s not good news across the board; the improved animations do have a positive effect on gameplay, but compared to FIFA 17, Pro Evo 2017 is still lagging behind in terms of its visual representation of the sport. Up close, the game is a work of art with many of the most famous players looking remarkably similar to their real life counterparts, but when the camera pulls out for the actual match view, yeah, things aren’t quite so hot. It’s still a good looking game, but those slightly robotic animations and occasional rough edges do start to stand out. The individual attributes and unique animations for star players are great, but for the rest of the footballing world, it’s all a bit samey, and with the stadiums, commentary and incidental details all lacking the kind of polish that FIFA specialises in, it can look a tad rough by comparison.

The same is true of Pro Evo 2017’s game modes. They’re all decent enough, but as always, the presentation feels somewhat cumbersome and old fashioned. Improvements have been made, but there is no getting around the fact that Pro Evo 2017 is still a long way behind in terms of its structural presentation. 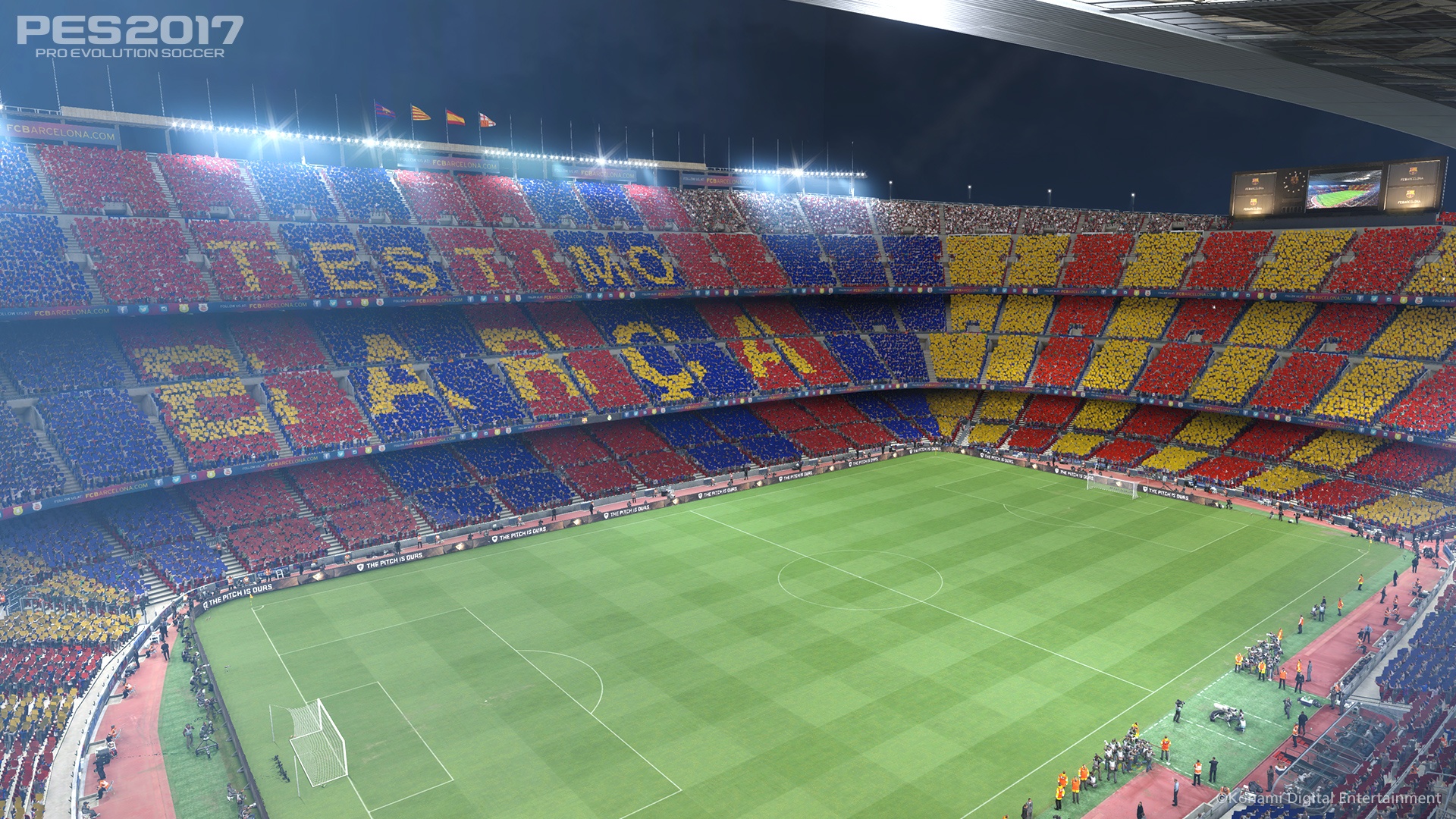 Saying that, from what I have experienced, the online infrastructure seems more stable this time around, MyClub, while largely unchanged, continues to provide a solid but inevitably less successful alternative to FUT while the Champions League and Europa League competitions represent a much needed licensing success. It is however the Master League that remains the undisputed crown jewel of the series. It will feel immediately familiar to those who have spent time with Pro Evo’s primary game mode in the past, but with a handful of presentational tweaks and an all new transfer system, Master League once again feels like the definitive single player football experience

Of course, licensing remains an issue (it always does), and while efforts to capture exclusive licenses such as the Champions League the Camp Nou should be celebrated, some will never get over having to play Lancashire Claret vs West London Blue…….and why should they? Yeah, PS4 and PC players can download kits online and import them into the game, but let’s face it, that’s an unwanted effort and something that FIFA players simply don’t have to bother with. Sure, some of us (like me) take a strange joy in the yearly ritual of editing the details of the Premier League teams, but for many, this is the primary reason why FIFA will always be king – it’s certainly plays a large part in FIFA’s ongoing sales dominance.

So, licensing is still an issue, and despite star player likenesses trumping those of its great rival, Pro Evo 2017 remains a tad rough around the edges when it comes to its overall presentation. Still, despite these ongoing issues, once out on the pitch, Pro Evo’s class shines through almost immediately. With a slower, more deliberate pace, improved animations, better goalkeepers and fantastic AI, Pro Evo 2017 undoubtedly delivers the best game of virtual football money can buy. With its usual mix of tactical depth and comparatively limited resources, Pro Evo 2017 remains the Athletico to FIFA’s, Real. It might not have the budget or the star billing of its more illustrious adversary, but in practice, the team at Konami continue to make better use of the tools available.