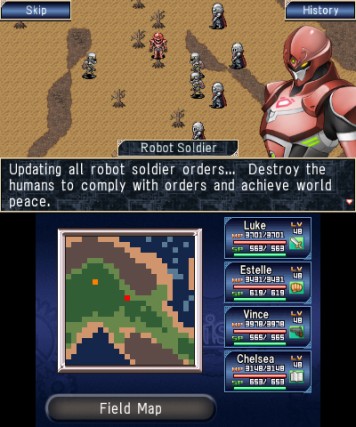 Infinite Dunamis creates a challenge for itself simply by being an RPG. The RPG has become one of the most prevalent gaming genres, in part due to being one of the easiest types of games to replicate. As such, RPGs tend to be very hit or miss, and very few can even hope to compete with such series as Final Fantasy and Chrono. However, Infinite Dunamis, though perhaps not the most original game out there, does an excellent job creating a fun experience worth playing.

I will start with the few negatives of the game. Its two-dimensional graphics, though not necessarily bad, are not particularly appealing either. The character designs also fall under the category of “average”; they are not quite spectacular, yet still well-designed. All in all, the graphics seemed to be a lower priority (which is not necessarily a bad thing). Nevertheless, the graphics are decent enough to where they do not detract from the gameplay experience in any way.

There are also some minor dialogue errors worth pointing out. In some instances, word choice is awkward and does not flow properly, and there are also instances of minor grammatical errors. Of course, these are nit-picky things to notice, but it is worth mentioning that it takes away from the professionalism of the game. However, past these very minor flaws, this game has a lot to offer. 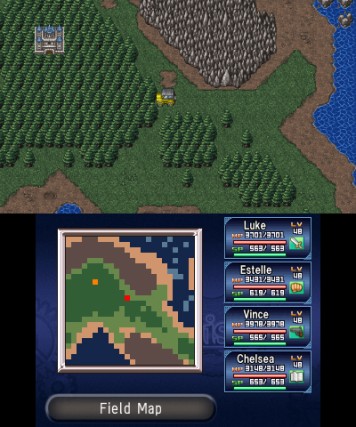 In my opinion, gameplay is the most important factor in making or breaking a game, and it is obvious to me that creating a fun gameplay experience was of first priority to the creators of Infinite Dunamis as well. This game puts an interesting twist on traditional turn-based strategy. Rather than the Speed stat determining the order within each given turn, such as in Pokémon titles, the Speed stat in Infinite Dunamis determines the number of turns each character gets. For instance, if the player character is twice as fact as the enemy they are facing, then they will be able to attack twice before the enemy attacks once. This speed is tracked at the top of the screen where moving icons denote whose turn it is and how long before each character will have their next turn.

Outside of this unique battle system, Infinite Dunamis offers plenty of traditional RPG battle options, giving the player the ability to attack, heal, defend, or use a special skill in battle. Of physically selectable battle options, this game does not offer much that you would not see in many other RPGs. Outside of battle however, it offers even more unique options, such as stat boosting crystals. 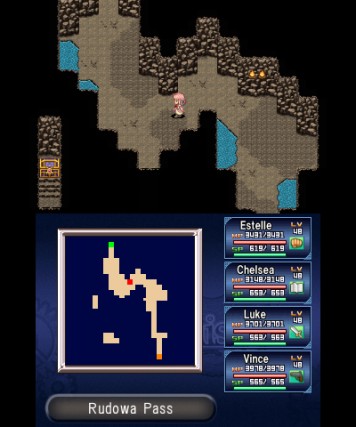 Infinite Dunamis employs plot elements brilliantly. The plot itself is decent, with a backstory of robots trying to kill humans in order to create world peace, and with further plot developing as the main character, Luke, meets a cyborg girl named Estelle (I will refrain from spoiling any further plot details). However, what really makes this game is not the plot itself, but the way this plot is used. This game is not overbearing with plot as many RPGs tend to be. The developers managed to create a balance where plot only helps to further along the gameplay. I personally hate reading extensive lines of plot in video games, but I never found myself bored by being forced through too much plot.

Finally, one aspect of this game which will be either hit or miss with most players is that, at least at the start, it is relatively easy. Objectives are not complex, and it is very simple to trigger cutscenes and progress throughout the game. Random encounters can usually be killed with a couple of hits (which is great, because this is probably the first RPG I have ever played where I was not frustrated by wild encounters). All characters will have their HP and SP restored after leveling up, and items which are easy to come across heal vast amounts of HP and SP as well. In short, if you are an experienced RPG-player looking for a challenging title, Infinite Dunamis may not be for you. However, this game is very easy to pick up and play for inexperienced players, which is very refreshing to see from what is typically one of gaming’s most difficult genres.

As of writing this article, I have only played through the first two hours or so of this game. I personally cannot wait to see how plot develops, and what further abilities my characters will be able to learn. This game masterfully blends RPG elements to where you do not even have to be an RPG fan to love this game. If you are looking for a fun experience with an even mix of unique plot and engaging gameplay, then Infinite Dunamis is definitely the game for you.