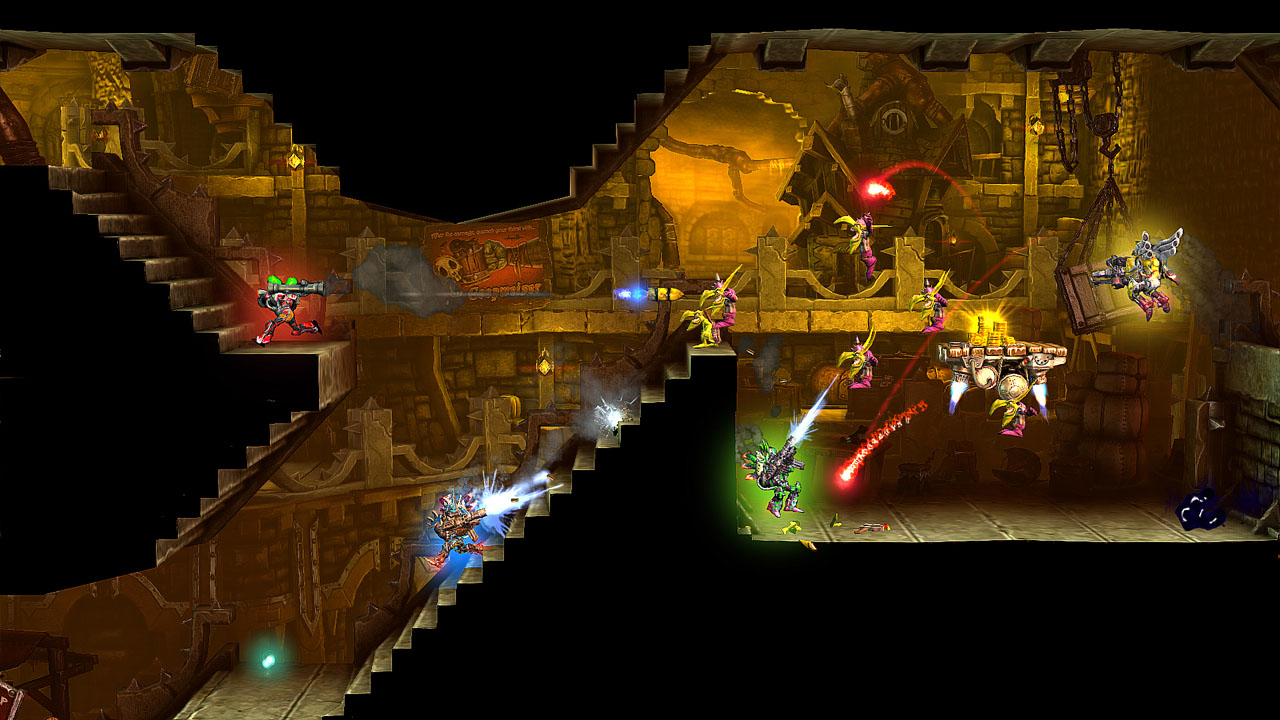 I’ve grown very partial to Roguelikes / Roguelites over the last year or so. Since my first run in with ‘The Binding of Isaac: Rebirth’ I’ve tried to play as many of these procedurally generated, perma-death / semi perma-death games as I can, my favourite so far being ‘Enter The Gungeon’. When combining my fascination with this genre and my love of platform shooters such as ‘Contra’ and ‘Midnight Resistance’, what you end up with is a PC title named ‘Rogue Stormers’ which has just been released on consoles in recent weeks.

Set in the fictional city of Ravensdale (described by the developers as a “medieval metropolis”) residents have gone berserk over a recently discovered resource known as “goop”. A multipurpose substance that can produce energy and power machinery. Civilians have been murdering each other over it and the media has become corrupted as a result of it. In response to the chaos, a band of knights have taken it upon themselves save the city from the corrupt creatures that are ruining the land over this goop, armed not with swords and shields, but with laser guns and jet packs.

For me, this story is incredibly refreshing. Normally I hate the patronizing nature of inserting political or environmental messages into video games, however Rogue Stormers seems to take a more satirical approach. Rather than being preachy or judgemental, it simply holds a mirror up to our political climate and uses it as the motivation for our protagonists.

Speaking of protagonists, there are five radically different characters to choose from, all with their own primary weapons and special abilities. Only one knight is available to select from the start (‘Brecht’, the motorgun wielding knight), however as you make progress the remaining Knights will unlock one by one. Some of the notable characters to choose from include ‘Stabbygale’ (I love that name) whose primary weapon is a spread shot, and Camille who appears to be radioactive and has a striking green and purple colour scheme. Unfortunately as much as I like Camille’s design, her primary weapon is a rocket launcher which I find a little slow for my play style. 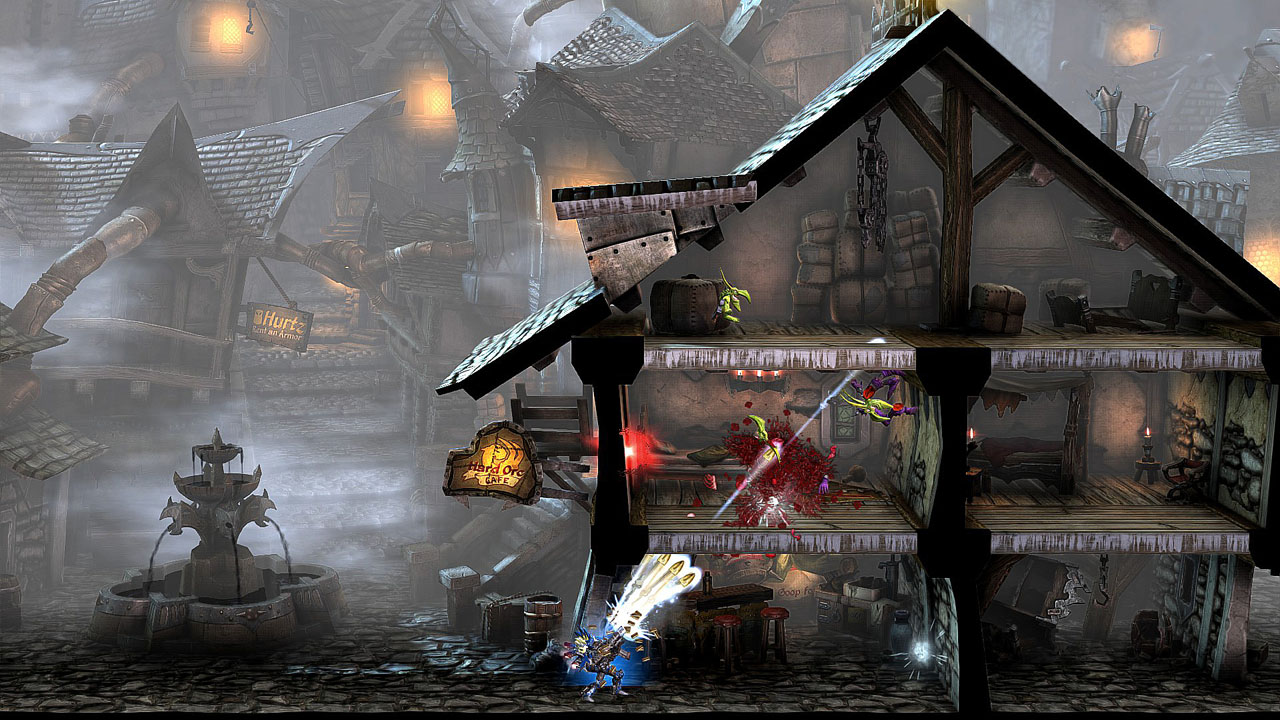 Rogue Stormers combines the joys of a platform shooter with a twin stick shooter. You can move around with either your left analogue stick or D-pad, shoot in all directions with the right analogue stick, and the shoulder buttons are reserved for jumping, hovering, dashing and (once you have found one ) using a secondary weapon. There are a few different sets of control configurations available in the options menu, unfortunately you do not have the ability to fully rebind the keys. In the default set up jumping is set to L2 which I didn’t like for a couple of reasons. Firstly, L2 is an analogue trigger and I prefer jumping with a solid button. Secondly, I’m used to hitting jump with my right hand rather than my left. Fortunately there was an option which incorporated the face buttons and assigned ‘X’ as ‘jump’. Using this particular set up meant I couldn’t jump and shoot simultaneously, but it was certainly the most comfortable option for me.

Each run is split into 7 stages, all of which end in either a boss fight or an encounter with some sort of security blockade (which in itself, kind of acts as a mini boss fight). Stages are procedurally generated although you will frequently cross the same design segments repeatedly. It’s as if each stage is just slightly remixed or shuffled around a bit, rather than generating a complicated labyrinth which you can easily get lost in. Although the art style in these stages is pleasant to look at (particularly the heavily detailed backgrounds) I did find that a lot of the stages felt very similar to each other, increasing only in scale rather than scope.

Similar to ‘Gauntlet’, most of the combat involves taking on hoards of smaller enemies that spawn in from specific locations, rather than battling fewer intricate ones. This is ok in wide open areas, however there were times in closed quarters where this was a little overwhelming and not particularly particle. There are some stage hazards such as fires and electrical bolts, but these are pretty standard for platform games and not particularly challenging.

Each stage will contain many chests (some of which require keys or health sacrifices to open), shops and fruit machines. From these it’s possible to get passive items, of which you can hold dozens at a time. Holding many of these items at once can produce some notable synergies, however I found that individually a lot of these items only made small improvements. I rarely found an item that I thought was particularly exciting on its own. It’s also a good idea to read the descriptions carefully before picking them up as some items will offer perks, however they may be paired with undesirable negative effects. As such it doesn’t always pay off to just collect as many as you can in a blind fashion. 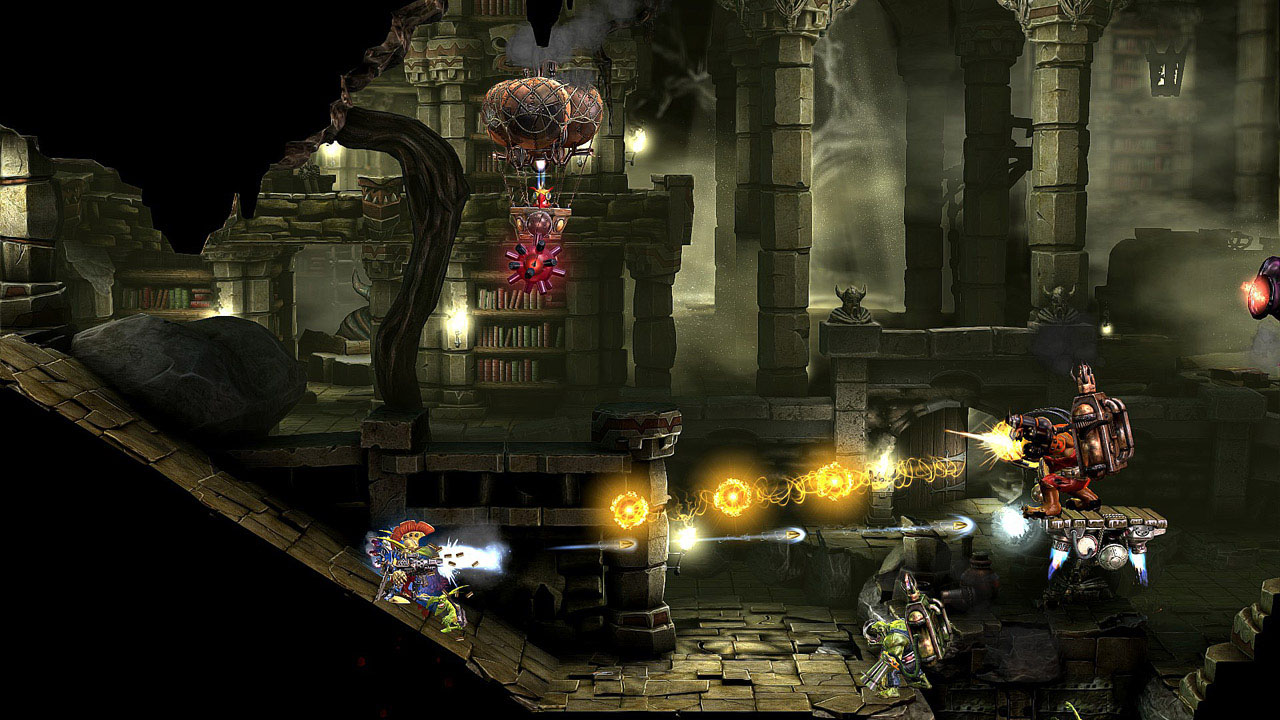 Like many rouge lites, ‘Rogue Stormers’ is a little difficult to review over a short period as it’s the type of game where you get out what you put in. Like ‘Rouge Legacy’ there are a lot of RPG elements with characters that level up slowly over time, gathering subtle perks and statistical upgrades as you gain experience. When fully upgraded a character can become far more competent than their vanilla counterparts, however getting to that point requires several runs through the game.

Another aspect which I felt dampened my experience was that up until now I’ve only had the chance to play in the single player mode. ‘Rogue Stormers’ not only allows you to play online co-op but also in “couch co-op”, which I suspect is how this game is intended to be played. I’ve watched some footage of the game being played with up to four people and the co-op aspect not only makes combat a lot tactical, but also introduces elements of strategy when it comes to distributing power ups and passive items amongst your team.

In conclusion, I did have fun with ‘Rogue Stormers’ although I am a bit surprised that didn’t enjoy it more given that on paper it seems like the perfect combination of my favourite genres. I think my initial experience has been slightly dampened by the RPG style progression and a bit of repetition with the enemies. I will definitely be sticking at it and hope to make a bit more progress once my characters are stronger and my friends come over to join me in some co-op play.

I think it’s current price tag of £14.99 is very reasonable for what you are getting, however if you do not own ‘Giana Sisters: Twisted Dreams’ as of yet there is a great bundle deal on PSN where you can get both games for £19.99, which is well worth it in my opinion as it’s a stunning little platform game.