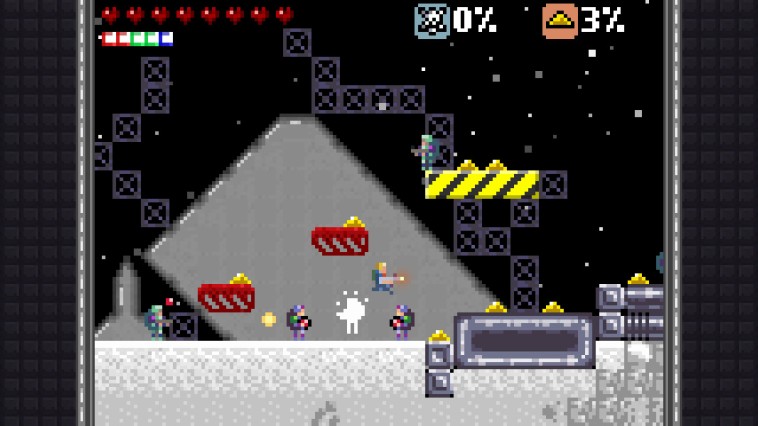 Blasting Agent: Ultimate Edition seems to draw its inspiration from the NES/SNES era of gaming, sporting old school pixelated graphics and simple gameplay mechanics. This game acts as a traditional 2D platformer/shooter, and I must admit it is not the most unique in execution. Nevertheless, it has its niches that make it an overall well-designed game.

As far as graphics go, Blasting Agent: Ultimate Edition does fairly well considering the NES style it mimics. The main character’s design is bland and faceless (which is ironic considering the complex artwork he receives on the title screen). However, enemies are original and easily recognizable, especially in the case of bosses. Each level has different sections which the player travels through which, despite retaining the same theme, each have their own unique flavor.

The game is accompanied by fitting upbeat music, setting an excited mood and flowing perfectly with the pace of the game. Though the song list is limited, the tunes used are catchy enough to where the player will not become annoyed by the repeated sounds. 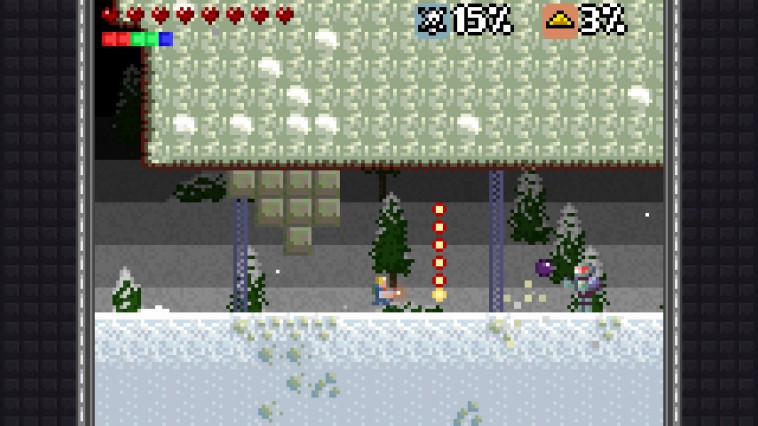 Gameplay is simple and easy, and the game even presents the player with the option of customizing the limited necessary controls at the very beginning. The only commands required to play this game are “jump” and “shoot.” However, other mechanics add layers to the depth of the gameplay. For instance, in Super Mario Bros. fashion, enemies can also be defeated by jumping on their heads, adding a layer of strategy as to how enemies should be disposed of, and even allowing enemies to be used as a faster transportation method by jumping off of their heads and on to other platforms. In addition, this game allows the player to use aspects of the environment, such as beams which allow the main character to float upwards, in order to strategize the best ways to move and attack enemies.

The overall layout of the game is decent, though not without its flaws. This game shows a little bit too much on-screen at one time. This coupled with the low detailed graphics can make it difficult to decipher what exactly is going on in the game. On occasions I found myself running away from enemies which ended up just being part of the background, and other times I was even dumbfounded as to how to progress because I could not see the black door which allowed for my entry into the next portion of the level. This game is not entirely well suited to be played on a relatively large screen, and certain aspects of the game become less enjoyable as a result.

The biggest aversion I had to Blasting Agent: Ultimate Edition was its difficulty. Even on “easy mode”, this game takes one step past a simple challenge and enters the realm of being frustrating. Due to the “bouncy” effect which occurs whenever the main character hits an enemy, being hit once can cause the player to get trapped in a pinball machine of enemies, often making death (or at least high amounts of damage) difficult to avoid upon being hit once. In addition, enemies are not killed easily, and often it can take several attempts at a portion of a level to figure out the best way to go about conquering it. This is somewhat alleviated by the infinite lives which the player is granted, but the struggle that occurs when trying to progress can make this game frustrating to play in extended sessions. 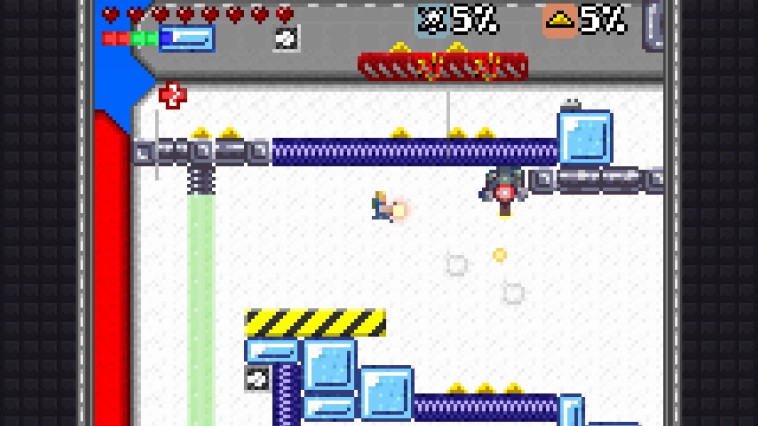 However, one aspect which Blasting Agent: Ultimate Edition nails is the many ways in which it allows the player to play the game. While this does not show up in the form of several modes, the gameplay mechanics themselves allow for the player to take multiple courses of action in beating a level. The player could take the time to collect all of the treasures and kill all of the enemies in their path. Conversely, they could take the speedrunner approach and fly through each level as quickly as possible while avoiding all of the enemies. This game creates a good balance where little is required to beat each level, but much is offered to those who seek it out, an excellent design strategy for appealing to gamers of different kinds.

All in all, Blasting Agent: Ultimate Edition is a decent game. While this game lacks the pick-up-and-play aspect to where anybody could easily enjoy it, I do believe the developers knew what they were doing and did it well. Despite the moments of frustrations it occasionally creates, Blasting Agent: Ultimate Edition represents the platformer/shooter genre fairly well. If someone is looking for somewhat of a blast from the past and does not mind a bit of a challenge, then they would certainly enjoy this title.