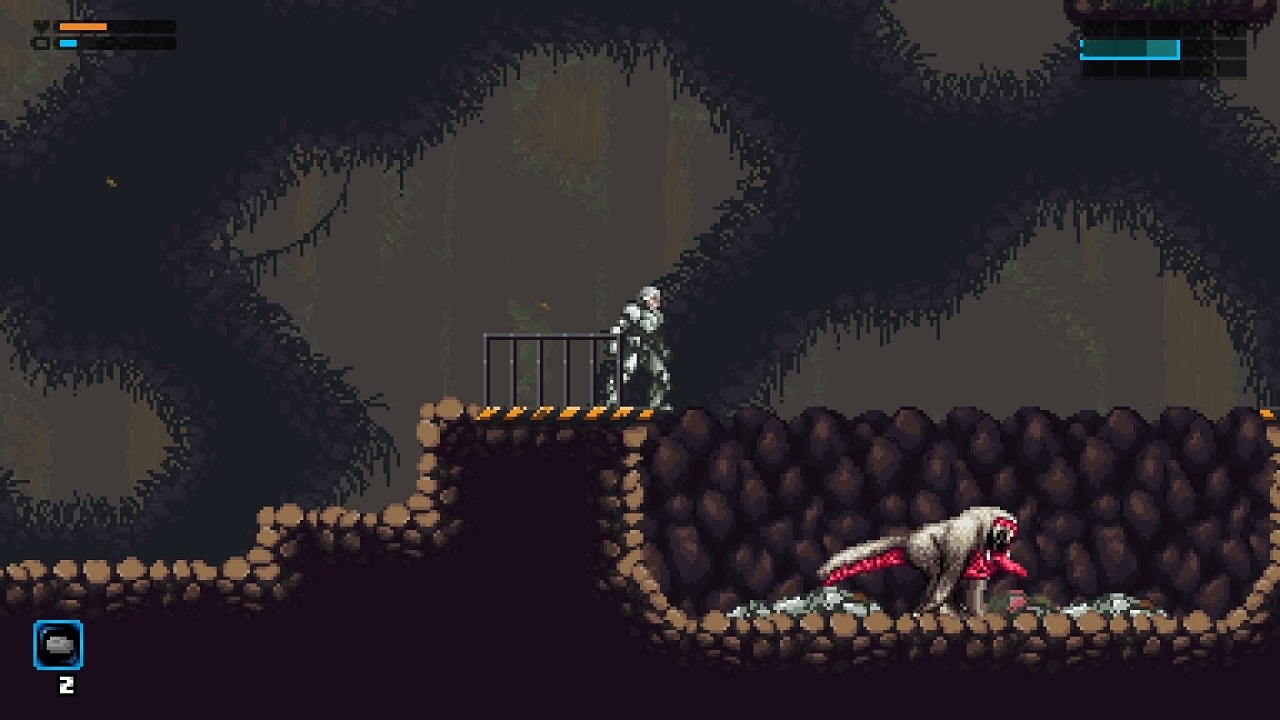 There has been a bit of dry spell recently when it comes to Metroidvania style platform games. When I think back to some of the more recent gems that I’ve enjoyed such as Guacamelee, Strider (2014) and Shantae, I find myself looking at games that are at least two years old. Actually the last sensational one I’d played was Axiom Verge and that was released in March of last year. As a result I got a little excited upon discovering ‘Exile’s End’ while browsing the new releases on the Playstation store.

You play as some sort of marine named ‘Jameson’ who is investigating a mining operation on an alien planet that you have lost contact with. Upon approaching the planet a surge of energy destroys your ship and wipes out the crew. You and a couple of other crew members manage to evacuate via escape pods, however you are the only one who appears to survive the impact.

If an original Metroid title was released early in the Mega Drive or Amiga’s lifespan it would probably look a lot like this. The characters don’t have too many frames of animation so the movement doesn’t look particularly smooth, but if anything it adds to the authentic 16-bit charm. The art style utilizes lots of earthy colours and stone brick textures. The external areas feature some lovely parallax scrolling and remind me a little bit of Shadow of the Beast. There is nothing too wild or bright about these graphics which helps to set a more serious tone.

The game begins in a forest area and actually has quite a slow start. Unlike many other games in this genre you start with no weapons or means to defend yourself. I spent the first twenty minutes having to resort to throwing rocks at hostile aliens and carefully evading attacks. This early segment was very reminiscent of the classic Amiga titles ‘Another World’ and ‘Flashback’ as far as feeling vulnerable is concerned. To make things more difficult you also take fall damage if you jump down to a ledge which is too far beneath you. Fortunately it doesn’t take too long to upgrade your power suit to eliminate the fall damage and find yourself a pistol. Once you are better equipped you can begin exploring the surrounding locations such as a science lab, a cathedral, temples and ruins.

As you explore the landscape you will eventually discover more upgrades that allow you to open up more of the world map. Many of these upgrades are passive items such as an oxygen mask so you can breathe underwater or a radiation suite so you can walk through contaminated corridors. There are a few active items such as the ability to double jump and a large magnet that can be used to flick leavers from a distance. Personally I would have liked there to have been a few more active upgrades such a hook shot as I felt many items were situational and basically acted more like keys rather than tools. 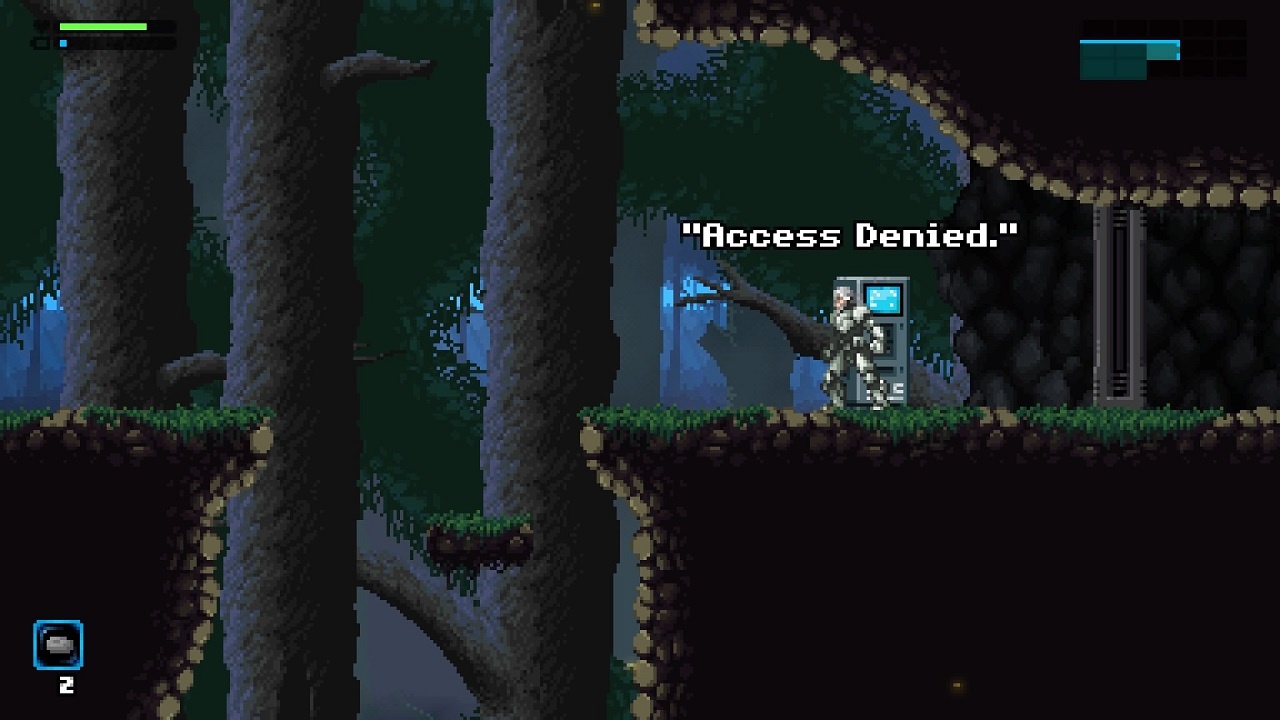 The combat is pretty straight forward. There is a selection of different enemies, however many of them have really simple and predictable attack patterns. A couple of the aliens don’t do much more other than pace backwards and forwards while occasionally shooting. Individually each alien poses no threat whatsoever, however they usually attack in packs. The last couple of zones feature a large range of different aliens attacking simultaneously, many with projectile attacks or flying abilities. Despite this, I never found any of the battles in this game to be particularly difficult to deal with.

There is a decent arsenal of weapons available once you locate them all. Your pistol has unlimited ammo, however you can also pick up a machine gun, rocket launcher and a few alien weapons such as the spread shot and charge shot. Both ammo and health are pretty easy to acquire as enemies often drop pickups upon death.

Early on you’ll pick up grenades which are incredibly useful and serve two purposes. In addition to being a very powerful weapon, you can also use them to blow up weak walls and uncover secrets. There are plenty of hidden rooms to discover which are not essential for beating the game but do include useful perks such as health upgrades and medical kits that you can carry with you until you need them.

The key to beating this game is through exploration and some light puzzle solving. One aspect that I was impressed by is how well the overall world map has been designed. Despite having no map prompts (which I personally hate using in these sorts of games) it’s actually quite difficult to get lost. Each time you encounter an obstacle you are usually given some indication of what tool or ability you need to overcome it. The game is structured in such a way that you usually have decent idea of where you should head next in order to progress without holding your hand too tightly. There were one or two physics based puzzles that had me stumped for a short time, but nothing too taxing.

As far as overall challenge is concerned, I personally found this game to be very easy. If you have little to no experience with Metroidvania style games then this would be a good entry-level title. There are only a small number of bosses, none of which gave me any particular problems. You have unlimited continues and the game auto saves whenever you leave / enter a room so you never lose any progress on death. 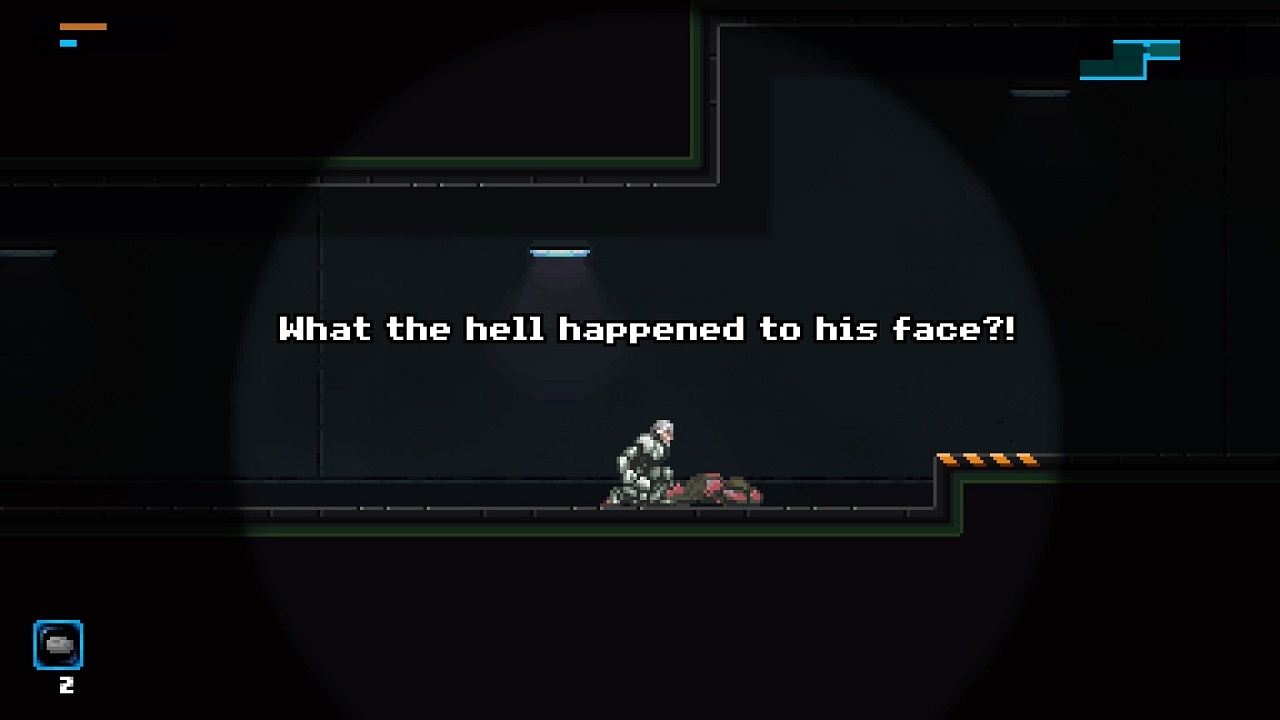 I don’t want to spoil anything regarding the ending, but I would describe it as very anticlimactic. Although I was perfectly satisfied with the game I did feel as if it ended rather abruptly and about 15 minutes earlier than it should have. I won’t say any more than that. In total my final game time came to around five and half hours, however that was my first blind run so I’m sure it can be beaten a lot quicker once you have the knowledge.

The game is very comfortable to control. You can move with the D-Pad, change weapons and items with the L and R buttons, and you can jump, shoot / throw grenades with the face buttons. If the default setting is not to your liking then you can rebind the keys in the options menu.

The overall presentation is ok although one area that I thought was a little below par was the sound. The sound effects and gunshots are all fine, however the music is very mechanical and repetitive. The moody music pieces set a great sci-fi tone, but they lack the tunes and melody needed to be appreciated.

This is a very stable game. I experienced no bugs or glitches during my play through although there was one design choice that I found a little annoying. As the game auto saves every time you enter a room it’s possible to end up in a situation where your checkpoint has saved when you have little to no health. There were a few rooms that I died in repeatedly as every time I re-spawned I was already almost dead.

In total there are two difficulty settings, a single save slot, a speed run mode (where you only get one life), and an entirely separate survival mode. The survival mode throws you into a series of chambers against a time limit. Killing the various enemies extends the amount of time you have. It’s a decent addition that adds a bit of extra replay value for when you are done with the campaign.

In conclusion Exile’s End is OK. If you are looking for something casual and easy to pick up then you can’t go too wrong here, however if you have a lot of experience with platform games and fancy a good challenge then this may miss the mark.