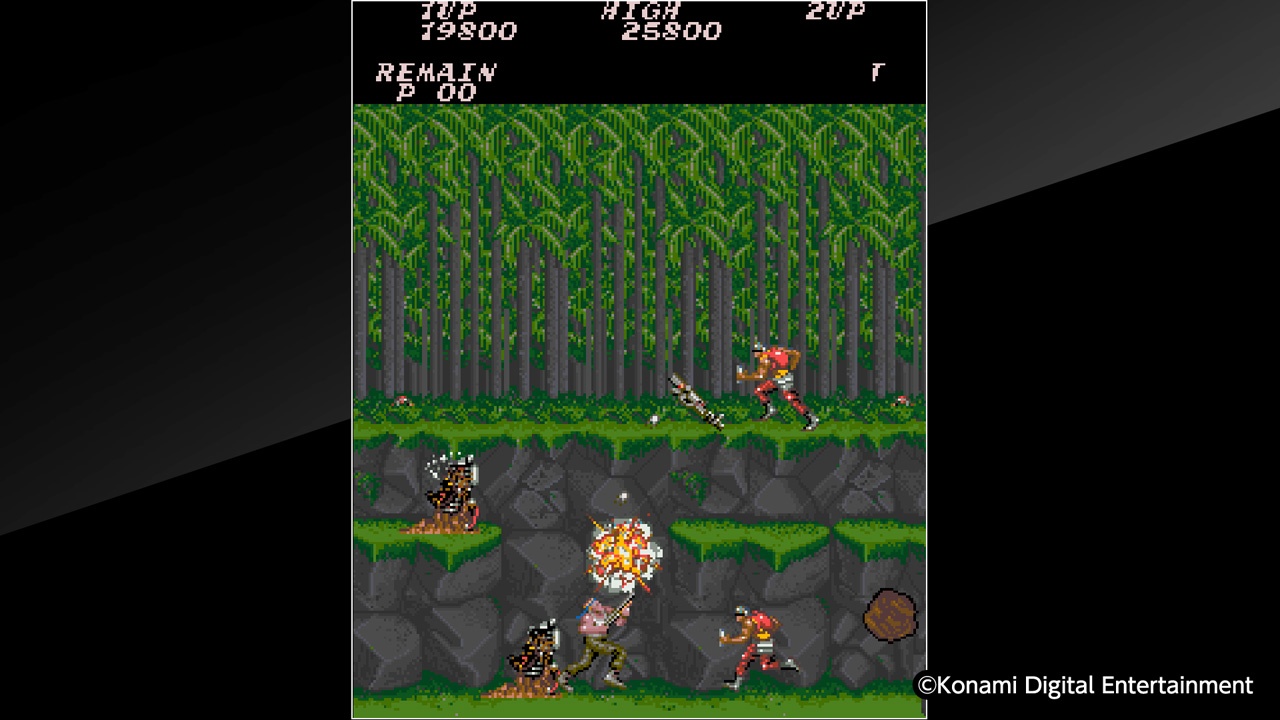 Originally released in the late 80’s, Contra is the notorious run ‘n’ gun game that was influenced by popular action movies of the day. Artwork for the two main protagonists was heavily inspired by Sylvester Stallone in ‘Rambo’ and Arnold Schwarzenegger in ‘Predator’. Also the big boss at the end bears a strong resemblance to the Xenomorph in Ridley Scott’s ‘Alien’.

The premise is very simple. Aliens are running rampant so two heavy muscle-bound marines strapped with machine guns have to leap into the jungle to clean up. For the most part it plays as a traditional 2D scrolling platform shooter, however there are some novel 3rd person perspective sequences which offer a bit of variety.

What puts Contra a cut above the rest is the amount of control offered to the player. Your character can shoot in 16 different directions. As a result you can aim at whichever enemy you want on screen with far more accuracy than in most similar shooters around at the time.

Enemies come in all shapes and sizes. You’ll mainly find yourself battling against armed soldiers, however you will also encounter turrets, tanks, mechs and other pieces of combat machinery. Like the player, enemies can fire in several directions so if you to stay on your toes. You will come across hostile alien life forms, however they do not appear until the final stage. 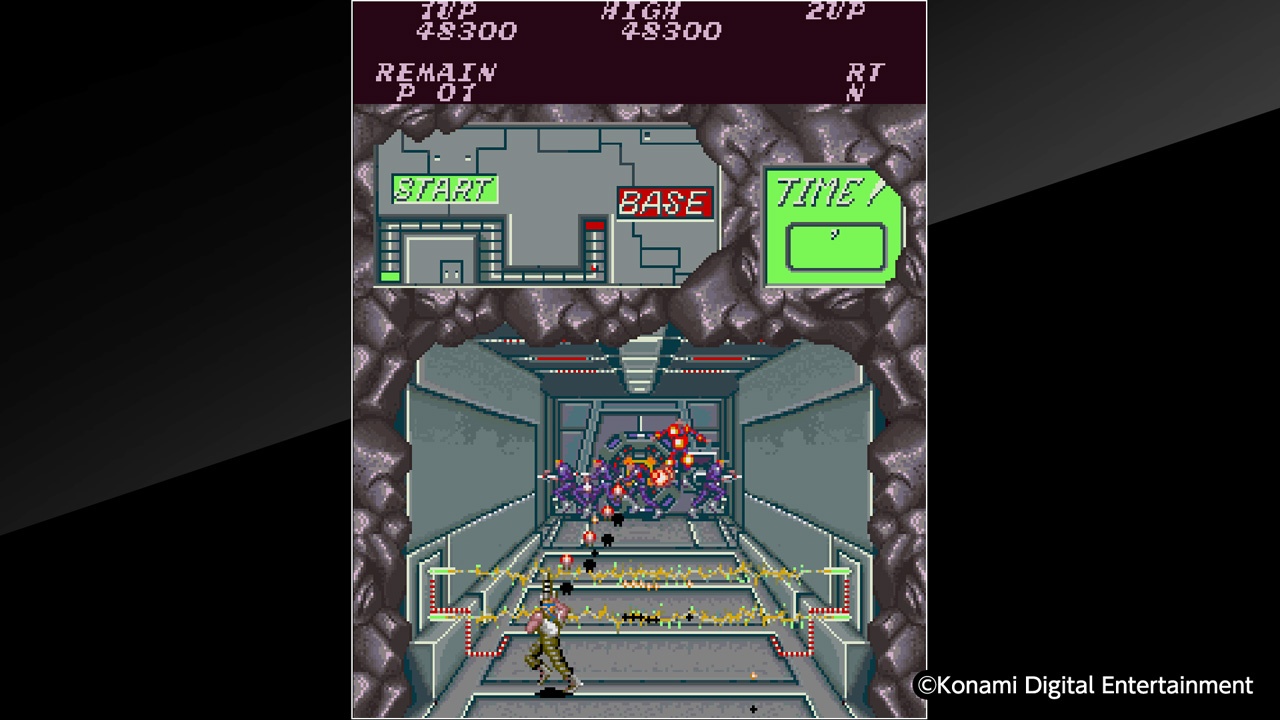 Contra traditionally requires a decent amount of skill in order to succeed. With each credit you get three lives, however there is no health bar. As such you lose a life every time you take a hit and begin the next life immediately at the point of which you died (no need for checkpoints, etc). Due to this harsh system it’s important to play this game carefully and with a lot of dexterity. To avoid getting caught by a stray bullet you have to be ready to jump to safety at a split second’s notice.

Every so often a small drone will fly along the screen or you’ll stumble across a large crystal. Shooting them will spawn a power up such as a shield to give you a temporary period of invincibility or an alternative weapon. Your default weapon is a simple straight shot, however there are also rapid fire weapons, laser guns, flame throwers and spread shot guns available. If you pick up a better weapon it’ll last until you either die or pick up another power up to replace it.

There are a small handful of bosses which are not too challenging once you have their patterns down. There is usually a large exposed weak spot which you have to target while avoiding turrets and smaller enemies. All turrets can be destroyed so it’s usually a good idea to take those out first to make life easier before focusing on the weak spot.

As far as presentation goes, this game looks and sounds exactly as you’d expect for a 30 year old release. The sprites are detailed enough for the player to be able to anticipate where enemies are aiming and the scrolling stages have a nice mix of scenery such as waterfalls and bridges. The most impressive looking level is actually the last one that takes place over three separate biomes (Snowy, Factory and Alien lair) with seamless transitions between each. The music is a little thin and tinny but the sound effects are strong and help to immerse the player into the action. 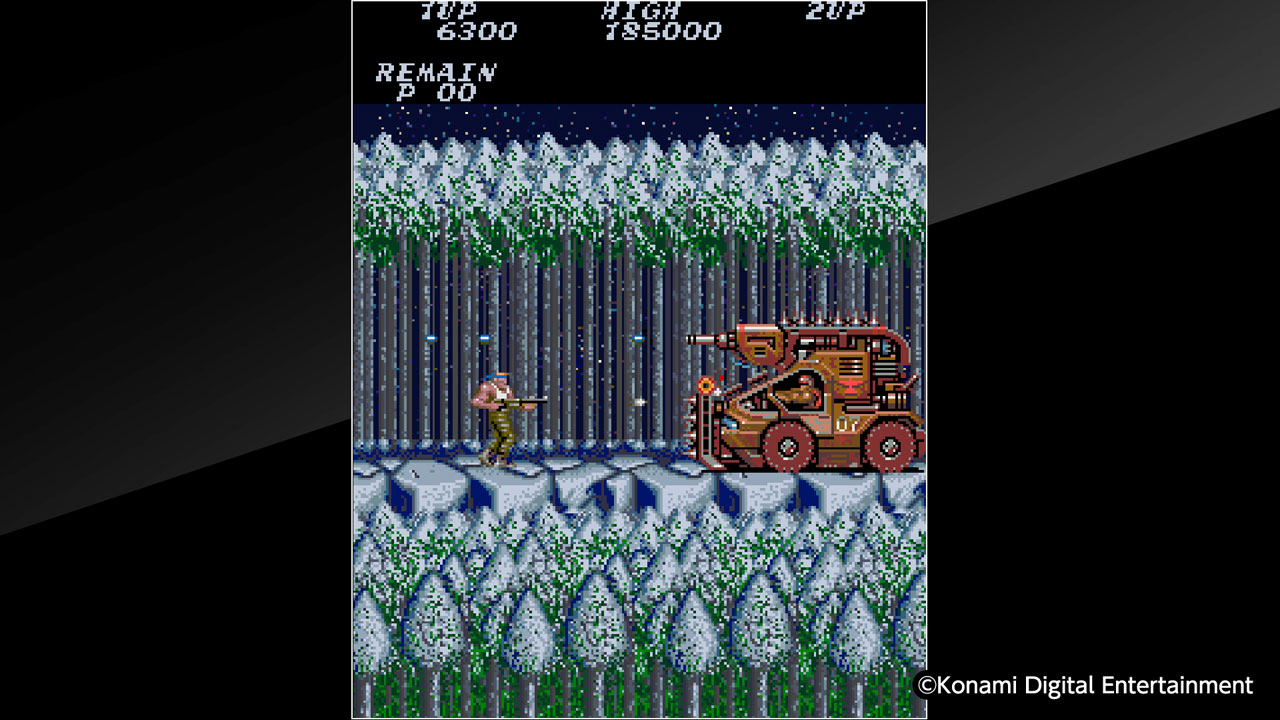 As far as the overall package is concerned, ‘Arcade Archives’ have included both the Japanese and American versions of this classic title, along with an online ranked mode to see how well a player can do on a single credit and a 5 minute time trial. You have the option of customising a lot of features such as difficulty, number of lives, a cap on credits and at what points extra lives can be earned.

On one occasion I did experience a soft crash which I could only resolve by quitting the application. I had decided to have a go with a custom setup and after I finished the last level I was prompted to upload my score to the online board. I think this was a glitch as I’m assuming I’m not supposed to upload a high score on anything less than the default settings. I think this is what caused the crash but I can’t be sure. Regardless, if this is a regular occurrence and not a one off problem I’m sure this will be patched out in future.

As much as I enjoy playing home versions of Contra, I had previously never had the pleasure of the arcade original. Taking into consideration that this is the first release in the series, it did come with a few disappointments for me. When compared to the most popular home version (the NES port) the arcade version is actually quite a bit shorter and seems a heck of a lot easier. Unlike the NES version which I’ve been struggling to beat for years, I beat this arcade release on the default settings (normal difficulty, 3 lives and a hand full of credits) in under an hour.

In conclusion, I appreciate the convenience of being able to play classic Contra on a modern system for around $8. It’s enough to scratch a run ‘n’ gun itch, however given the choice I’d rather sit down with the NES version and experience a real challenge. The NES version isn’t as easy to get your hands on these days as the Nintendo eShop seems to neglect this first entry in the series over the sequels, so a quick purchase / download on PSN is certainly easier and cheaper than trying to get your hands on a working NES.