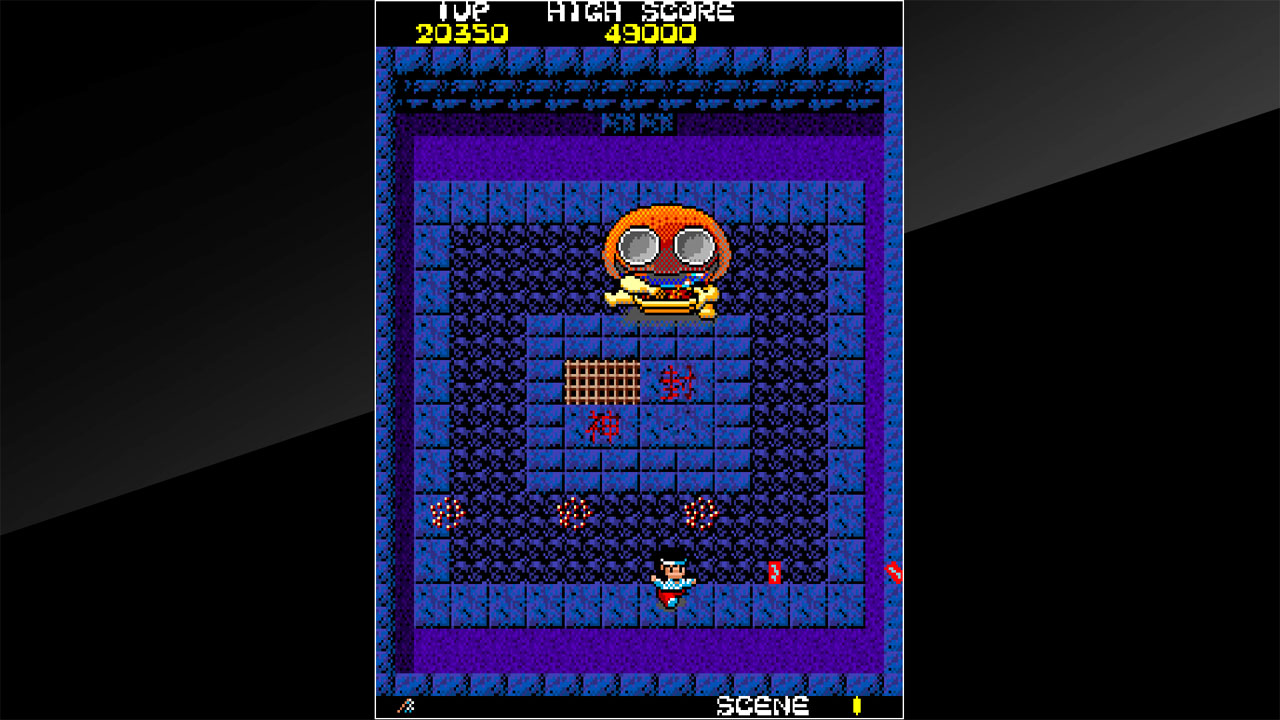 The Kiki Kaikai series in all its different incarnations is something I’ve only discovered recently. Those in the west may be more familiar with its predecessor ‘Pocky & Rocky’ which was a decent overhead run ‘n’ gun on the SNES. However, Kiki Kaikai was the original Japanese arcade game which unfortunately lacks some of the depth and polish that was later implemented into ‘Pocky & Rocky’.

The plot is briefly explained in a very short opening cut scene. You play as a maiden who is tasked with rescuing seven gods from seven mythical beasts. Apparently the gods and bosses in this game are all based on Japanese mythology and all of the aesthetics, sprites and music have an oriental theme running throughout.

Kiki Kaikai is a very linier overhead shooter that has you walking down a path through gardens and over bridges while being attacked by an assortment of enemies. Some of the enemies you encounter are fairly generic and mundane such as ghosts, skeletons and flying blobs. However there are a few strange oddities such as young women with exceedingly long necks and creatures that look like marine life with human legs. All in all, they’re a bit of a strange bunch. Enemies in this game don’t tend to fire projectiles, however they are quicker than you, have very erratic movement patterns and will damage you on contact.

To retaliate you have two forms of attack. Your main attack is a straight forward projectile shot (in the form of scrolls) which you can fire in 8 directions. It’s a quick and pretty rapid attack which I personally think is the most effective. There is a secondary attack in the form of a baton that you can swipe. It has a slightly wider range than the projectile however its reach is incredibly short. In theory it’s a bit more suitable if a few enemies have managed to get too close for comfort, however I usually have a lot more success with the projectile attack regardless of distance. 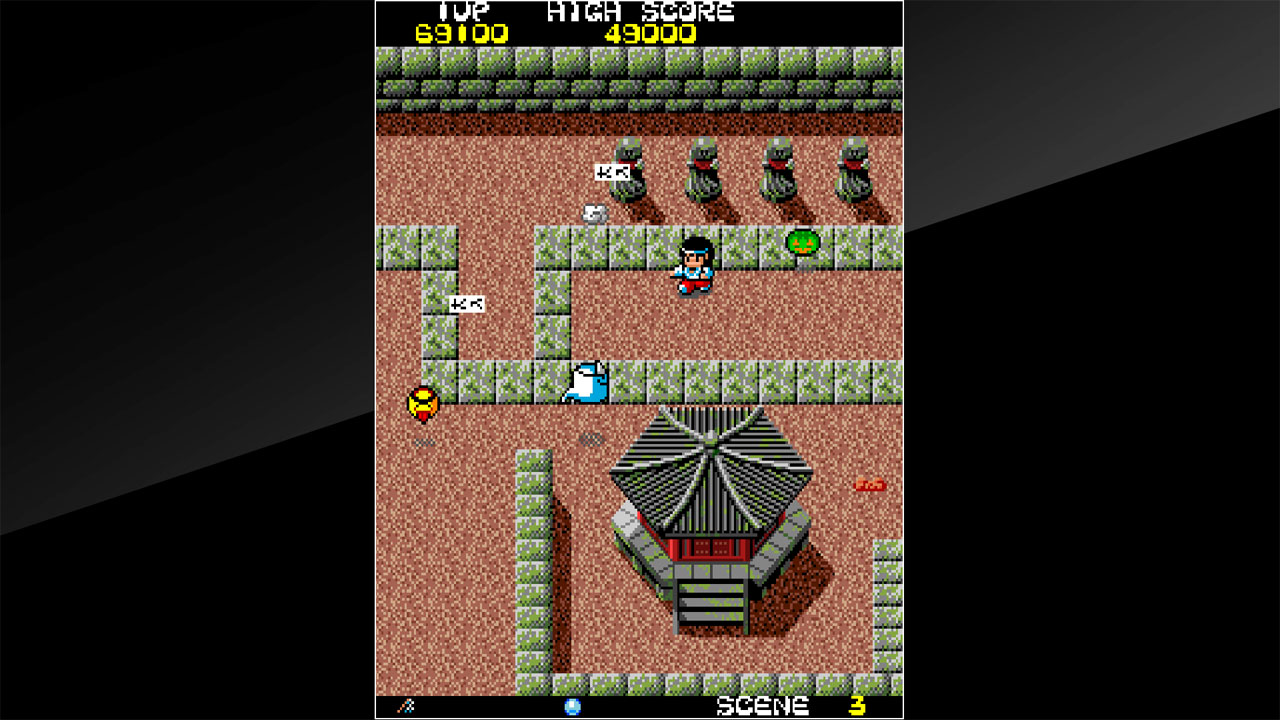 Your journey is split into 8 scenes. You walk freely around a strict path (there is no auto scrolling so you can take as much time as you need) until you reach a boss room. The majority of bosses are large and chunky with huge hit boxes and a strict attack pattern. The first five of them can be beaten without too much bother simply by keeping your distance and spamming the attack button. However the last couple are a bit smaller in size and a little more complicated to deal with so it’s best not to get too complacent if you get that far.

The controls are simple and responsive with the D-Pad / L stick being used for movement and face buttons that are used for attacks. However, even though the controls are responsive, movement and being able to position yourself accurately can be pretty fiddly. Maybe I’m a bit spoiled in the modern era with twin stick shooters like Enter the Gungeon and Alien Breed, however trying to stand in the right place and aim in the correct position using the same analogue stick seems a bit archaic these days. I frequently found myself having to make several small movement taps and taking a lot of back steps in order to get a clear shot. Team that up with the fact that enemies are faster than you and this game becomes pretty difficult to play. I’m sure this was all well and good back in the 80s however it doesn’t feel very practical today.

As far as presentation is concerned there seems to be a disconnect in quality between the sprites and the background scenery. The sprites do not look too bad, especially the bosses that are very well drawn, colorful and seem to have a bit of personality. However in contrast the backgrounds seem a bit drab and lack luster. There are only two pieces of music that play throughout the game which are the main game theme and the boss room theme. They serve a purpose and are not unpleasant by any means but they are nothing exceptional. 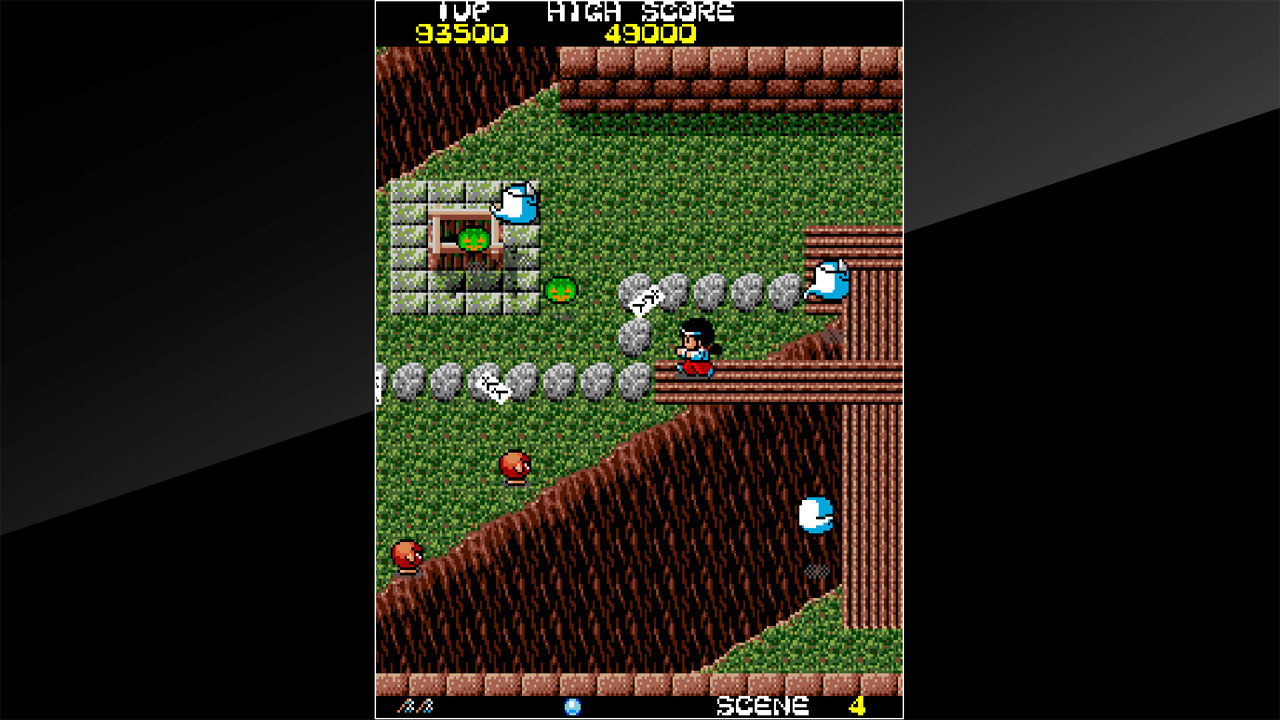 This arcade archive package features two game modes. There is the standard arcade mode where you can adjust options such as the number of lives, difficulty and how quickly bonuses are awarded. This mode also implements a very basic save state feature for those who wish to use it, however personally I’m not a fan of these. Alternatively there is a High Score mode where you play the game on the default setting with save states disabled in order to rank on an online leader board.

For me personally the big drawback of this game which applies in both modes is that you only get one credit per game. No matter how many coins you enter during the title screen there is no option to continue after you get a ‘Game Over’. Personally I found Arcade Archives Kiki Kaikai to be a very difficult game and despite several attempts I’ve not been able to complete it. I was able to get around half way through by sticking it on the easiest setting and giving myself the maximum amount of lives. However with no continues, one hit kills and no energy bar, this title is a real retro challenge. Maybe too much of a challenge for what it’s worth.

Overall, if you have any nostalgic value for Arcade Archives Kiki Kaikai then I think it’s great that it’s now available on PS4 for a very reasonable price, but to newcomers I don’t think this game has very much to offer. If this title does look a little appealing to you then you may be better off looking into the Pocky & Rocky games or maybe even Twinkle Tale on the Megadrive. These are all similar in play style but with a lot more extra polish.