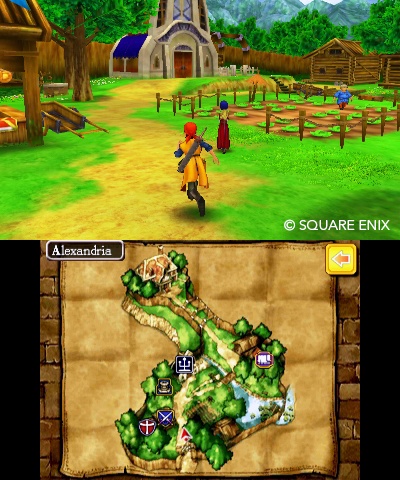 Hot on the heels of the recently released, Dragon Quest VII: Fragments of the Forgotten Past comes a very successful port of the first Dragon Quest ever released in the West and the first game from the then recently merged Square-Enix. Released in 2006 on PS2, two years after its original release in its native Japan, Dragon Quest VIII: Journey Of The Cursed King made very little impact over here thanks in part to its late release (the 360 was already out and the PS3 was on its way), but largely because, well, it was the 8th mainline game in a series that most people had never heard of, let alone played.

Of course, the consistent quality of the series has ensured a small but loyal following on our shores, but despite recent attempts to increase awareness, Dragon Quest remains a resolutely niche series. Well, I say an attempt, but in all honesty, Square-Enix have not made anywhere near the same kind of push that Capcom have with their own Japanese mega-franchise, Monster Hunter. Even if we don’t all play it, the majority of gamers are at least aware of Capcom’s Japanese behemoth. Like Dragon Quest, Monster Hunter has utterly dominated the Japanese gaming scene for years, and while it also hasn’t hit in the same way over here as it has in Japan, Capcom have at least made a concerted effort to sell us on the prospect. Something that (until recently at least) couldn’t really be said of Square-Enix and Dragon Quest.

Perhaps I’m being unfair though – while obtuse, Monster Hunter was (and to an extent, still is) an excitingly new and somewhat unique gaming experience. Dragon Quest on the other hand, while much easier to quantify thanks largely to the success of Final Fantasy (a series that was itself hugely influenced by the original 1986 Dragon Quest on NES), is so resolutely old-fashioned and tied up with its own traditions, that to sell it to a new fan-base is an all but impossible challenge. 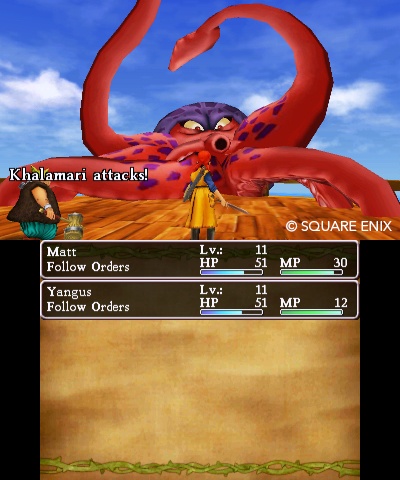 Still, as undeniably old-fashioned as it might be, as true as it is to a history the vast the majority of gamers here will have never experienced, Dragon Quest VIII: Journey Of The Cursed King remains an outstanding RPG – an almost perfect coming together of old and new, and thanks to an array of improvements for the 3DS release, the best version of this fantastic game that money can buy.

Don’t get me wrong, this is still largely the same game that it was back in 2006, and if truth be told, it actually looks a bit worse on the 3DS than it did on the PS2, but despite the slight downgrade in visual fidelity, every other change made has been to the benefit of the overall experience. The most obvious of these changes is the removal of those damnable random battles. I do enjoy “old-fashioned” JRPGs, but I’m more than happy for random encounters to be banished to the history books. Their removal is a simple but hugely effective change, making for a gameplay experience that is more naturally intertwined with its characters, story and tone.

Despite the old-school mechanics naturally hinting towards a “hardcore” experience, the tone of the Dragon Quest series, unlike the majority of angst-ridden JRPGs, is a much more low-key, positive and largely comedic proposition. Sure, you’re often saving the world, but rather than doubling down on a large-scale crisis, Dragon Quest has always put the emphasis on its characters and smaller-scale storytelling.

As is the case with most Dragon Quest games (well, the ones I have played anyway), the core story is all but irrelevant – the one here involves a king being turned into a troll and his daughter being turned into horse with your mute lead set off in an attempt to hunt down the evil court jester across an incredibly lengthy adventure. It’s all rather silly, but as always, it’s the smaller stories and relationships that ultimately make Dragon Quest VIII: Journey Of The Cursed King such a genuinely enjoyable undertaking. Sure, some of the delivery is a bit wonky, but the cast are so likeable that it is easy to forgive the occasionally terrible accent. 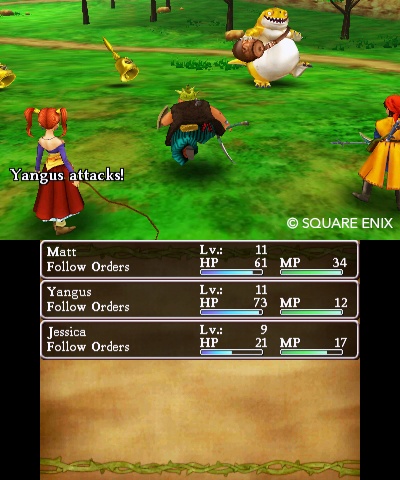 With additional story missions, extra side-quests, a photo-mode and two new playable party members all added for the 3DS version along with the return of the all-encompassing Monster Arena which, if given the chance, can be a game unto itself, Dragon Quest VIII: Journey Of The Cursed King certainly isn’t short of content to complement its likeable cast of beautifully designed characters, but as always, that would all count for little if the battle system wasn’t up to scratch.

Luckily, while it might be decidedly old-fashioned and somewhat simplistic in comparison to more modern JRPGs, Dragon Quest VIII’s battle system remains oddly compelling and largely addictive. The core mechanics are all rather basic, but with such fantastic and varied monster design by famed artist, Akira Toriyama, it’s hard to begrudge lining up before encounters in such a traditionally old-school manner. Sure, when the battles start, it is relatively straightforward, but with a decent selection of special abilities, a solid upgrade system and an effective crafting system, fighting your way across the games’ huge open world rarely feels like anything less than huge fun.

This decidedly old-fashioned adventure might prove a tough sell to the uninitiated, but for those with the patience to see beyond its genre trappings, Dragon Quest VIII: Journey Of The Cursed King remains a genuinely fantastic JRPG that embodies the perfect coming together of old and new to deliver an adventure that is much more than the sum of its individual parts. With its enjoyably light-hearted tone, its fantastic cast of characters and its (mostly) brilliant script, Dragon Quest remains a JRPG series quite unlike any other, and thanks to a host of modern-day improvements for the 3DS version, this latest re-release represents as good a starting point as any for newcomers to the series.