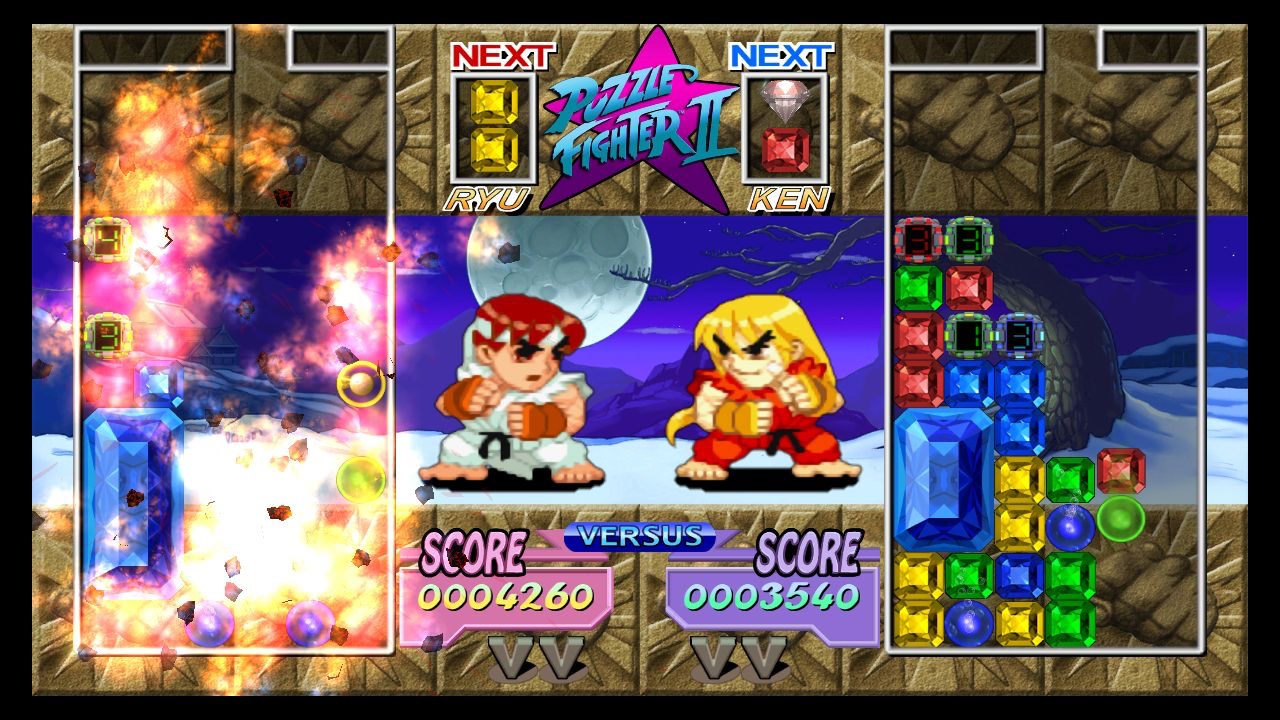 Tetris, Columns, Puyo Puyo, and the hundreds of variations that followed. It seems that ‘falling block puzzle games’ is a genre that has been milked dry over the decades. I don’t wish to knock them since they have provided many a gamer with countless hours of entertainment in the past, but these days I’ve seen so many variations of the same themes that I can’t really get invested in them anymore. As a result I walked into reviewing ‘Super Puzzle Fighter II Turbo HD Remix’ with fairly low expectations.

Firstly, please do not be fooled into thinking that a game with such a lengthy title (or the notion of some Street Fighter tie in) is anything to get excited about. SPF2 is simply a small collection of block based puzzle games and the Street Fighter theme is purely cosmetic.

This package includes some new renditions of classic Street Fighter music along with some cute child like versions of Capcom characters such as Ryu, Ken & Chun-Li. In addition to the Street Fighter characters there are also a few that I wasn’t familiar with such as Morrigan & Felicia from a game called ‘Darkstalkers’ (I hadn’t heard of it either) as well as Donovan & Hsien-Ko from ‘Night Warriors’ (ditto).

What is the purpose of having fighting game characters in a puzzle game such as this? Well, Puzzle Fighter works in a similar fashion to Puyo Puyo, in that you have to play the same puzzle game against an AI opponent (or a human one in the case of two player mode) and the objective is to survive for longer than the opponent. Regardless of which mode you are playing in, you get to choose a character that acts as an avatar and has their own specific pattern of ‘counter blocks’. By performing well on your side of the screen, you get to attack your opponent by dropping random counter blocks into their puzzle grid. 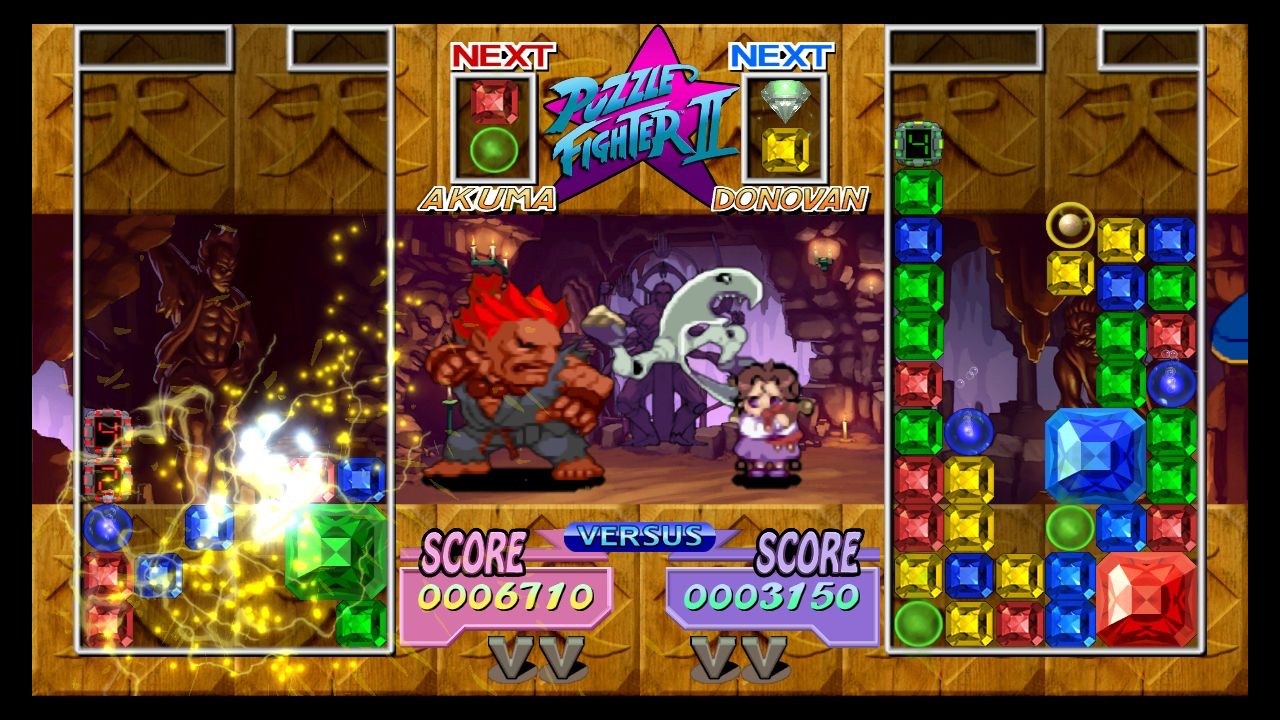 There a three variations of puzzles in SPF2 which are simply labeled modes X, Y and Z.

This is the mode I had the most fun with. Blocks of colored squares (2 X 1 cells in size) fall into the grid and the aim is to get as many matching colours touching as possible, either horizontally or vertically. Every so often a coloured sphere which I refer to as the ‘trigger’ will fall, and if you can get it to touch an area of matching coloured blocks then that area will disappear, with everything above it falling down to fill in the space. Since it’s possible to position these spheres in such a way that they are kept separate from large areas of matching blocks, it is possible to create chain reactions where multiple sections all get destroyed in a single move.

Breaking blocks on your side of the screen will cause stubborn blocks to fall into your opponents grid. These blocks are harder to break as trigger spheres will have no effect on them for a number of turns. Naturally, as your opponent breaks blocks they will also return the favour. The first player to have their blocks reach the top of the grid lose the game.

Although I enjoyed ‘mode X’ I do think there are some balancing issues here. Normally whenever I used my trigger spheres to remove blocks as quickly as possible then that was normally enough for me to get the win. However, if I made a bit of an effort to try and string together an impressive chain then the time taken to do so usually resulted in me screwing myself over. I think that if the game was restructured to reap better rewards for long chains then it would add a layer of strategy to it.

This is a more traditional block puzzle game. Again, like in Mode X you get to maneuver 2 X 1 coloured blocks into a grid, only this time the blocks break when you create a line of at least three in a row. These lines can be, horizontal, vertical, or diagonal.

Again, you play against an opponent and breaking blocks causes stubborn bricks to fall into the other person’s grid. Just like Mode X it is possible to create combinations depending on how your blocks fall once breaks occur.

Mode Z is perhaps the most unique in that rows of blocks and spheres actually rise up from the bottom of your grid, pushing your tower of blocks up to the top as it grows. Rather than controlling falling blocks, you control a cursor that can rotate the coloured blocks in a 2 X 2 cell. There is no limit to how many times you can rotate these blocks. The aim is to avoid crashing into the roof by creating large sections of the same colour and breaking them with trigger spheres. Other than this novel way of moving the blocks around, this essentially acts in the same way as mode X. 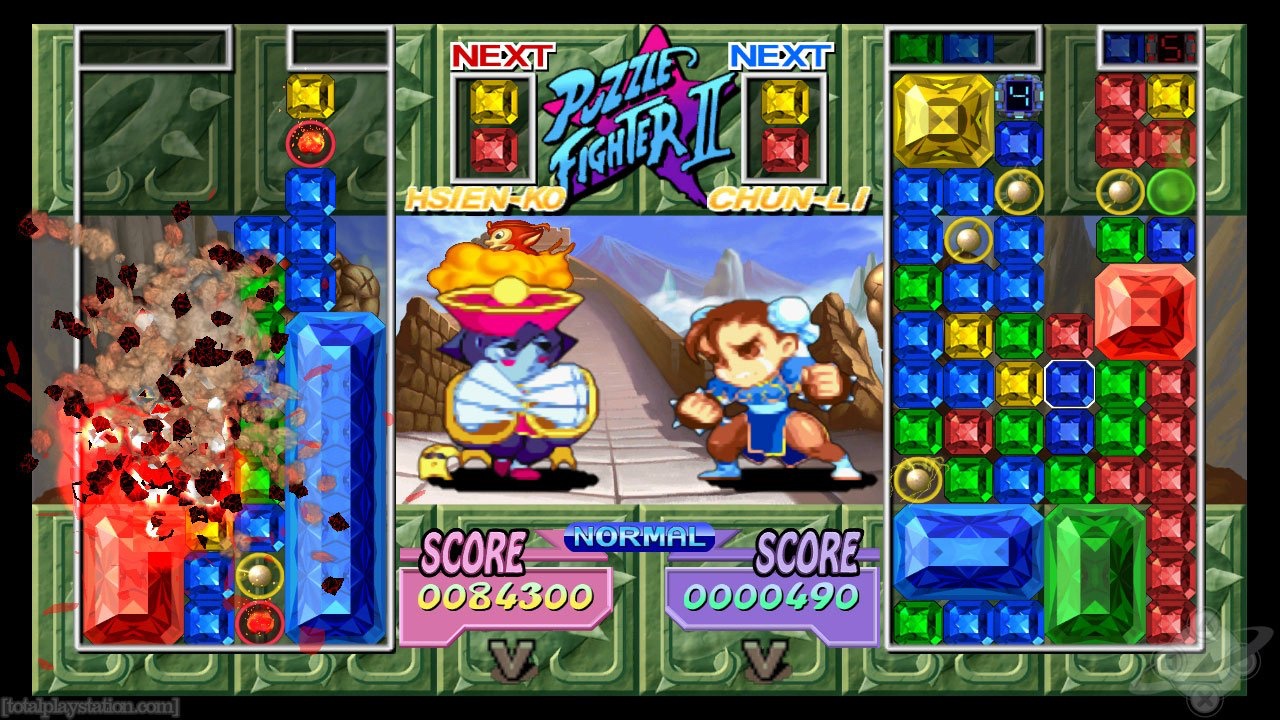 From a presentation perspective, SPF2 does look pretty pleasant for the most part with bright aesthetics that make it look like a child friendly mobile game. However, one particular eyesore is the inclusion of the two Street Fighter avatars that appear to be fighting in the middle of the screen while the game takes place. The two fighters represent how well the players are doing, however they do not look particularly sharp as they appear to be low res sprites with some sort of ugly upscaling filter over the top of them which blurs the edges. I could have done without these.

If you are only playing in single player, each of the three variants has an arcade mode where you face all 8 characters in succession, followed by a final boss. There are four levels of difficulty so you have some flexibility depending on your skills. I played through most of this game on Normal, and other than having to continue a couple of times, I didn’t have too much trouble beating it.

Personally I don’t think Super Puzzle Fighter II is a bad game. The three different game modes offer a bit of variety and if you’re just looking for something casual to play against a friend then for £7.99 this does the job. The only drawback for me is that I do not like how the Street Fighter brand has been dragged through this. It really wasn’t necessary as this feels nothing like the core games in the series and I feel that it cheapens the franchise, but that’s just a personal opinion.