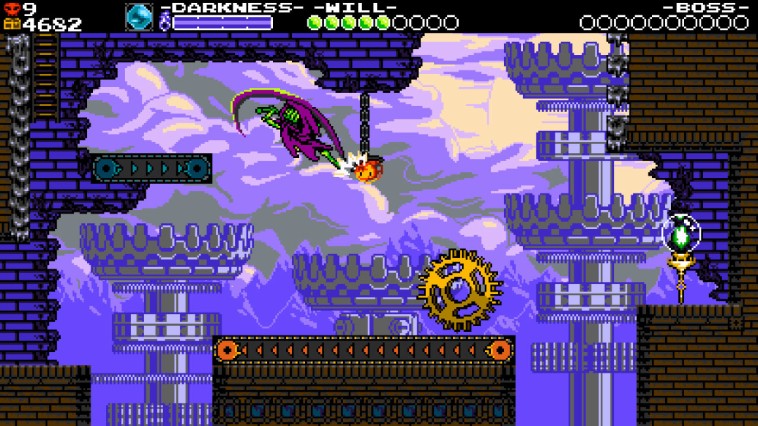 With its classic, no-nonsense approach to rock hard platforming fun, Specter of Torment is every bit the follow-up to Shovel Knight and its first add-on that fans are probably looking for. Specter of Torment is exclusive to the Nintendo Switch for a month following release, and like the first expansion (Plague of Shadows) this prequel focuses exclusively on a bad guy from the original game, in this case, Specter Knight.

Unlike Shovel Knight, Specter doesn’t bounce around on a shovel and instead, is armed with a scythe, a flying dash attack and a dexterous wall jump as well as a range of purchasable items revealed throughout the game. This shift in movement and weapon type ensures a reasonable amount of variety in comparison to the previous outings, but the art style and challenging gameplay will be eminently familiar.

Specter Knights proves to be less deplorable than you might at first think, and it turns out that he may not be a bad guy by choice after all. Nonetheless, the player is enlisted to help him drag a number of other equally unwilling characters into helping the nefarious Enchantress, who seems to hold sway over him somehow. The inclusion of wall jumping and the flying dash attack (which is often used to chain multiple jumps together) results in a game that is perhaps a bit harder overall than the original, but Specter makes up for that with his more direct offensive abilities when it comes to fighting bosses. 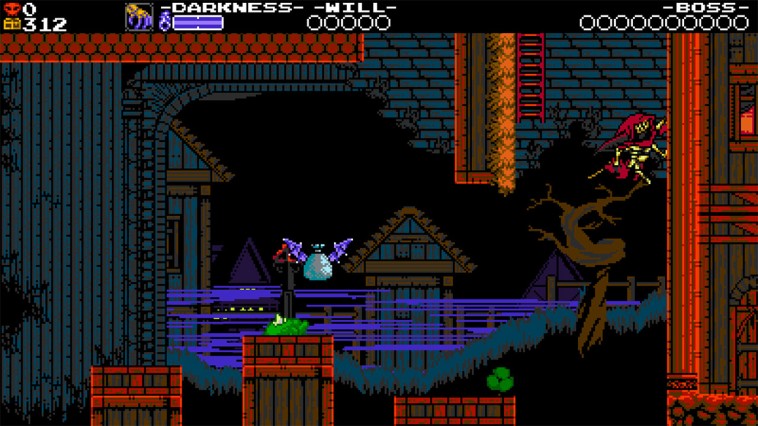 Indeed, whilst the levels are more challenging to navigate than previously, I was disappointed that on occasion Specter is able to chain dash attack after dash attack together to dispatch even tough bosses with relative ease. This is possible because after each successful hit, he will bounce back into the air, ready to strike again. I found this a surprise, as bosses in the Shovel Knight games have always been kind of a big deal and one of the most challenging elements.

There are about ten levels in total if you include the opening scene, the hub world, the individual levels that make up the bulk of the game and all of the unlockable content, and in total the game lasts about five to six hours depending on skill level. However, Specter of Torment is the kind of game that some people might give up on very quickly, as the challenging controls and tough gameplay can be quite daunting to those who don’t have the patience or desire to dedicate time.

It is a fab choice on Nintendo’s excellent semi-portable console though, as the 16-bit graphics look great on its slightly larger screen, and they also retain enough detail and fidelity to be perfectly acceptable on a HD or (upscaled) 4k TV. Graphically, I particularly enjoyed the variety between each level, with more than a fair share of gothic castles, snowy wastes, plains, graveyards, forests making up the game. There isn’t much to shout about in terms of special effects, but like the previous games, Specter of Torment is well animated game that brims with personality. 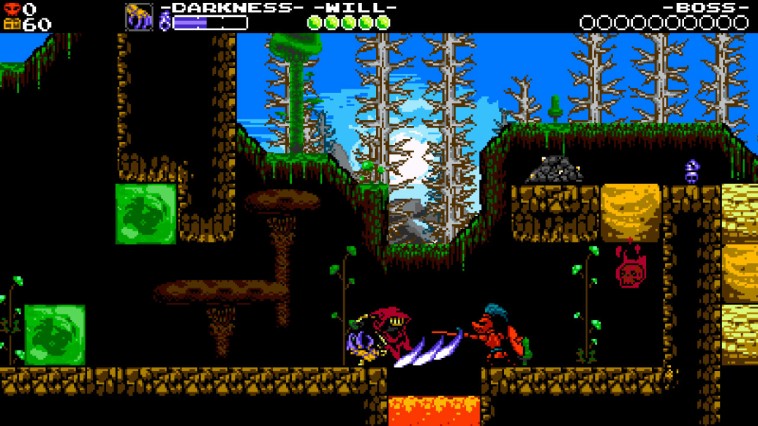 There is no Switch specific content (except for the brief exclusivity period) that I’m aware of, so players on other consoles will be able to enjoy the game in full relatively quickly, and the Switch version is also available as part of the Shovel Knight: Treasure Trove package, that features both the original game and the Plague of Shadows add-on, as well as Specter of Torment itself and represents great value.

Specter of Torment does nothing new for the genre or for the Shovel Knight series, but it does deliver more of what fans love, and it does so with just a few subtle changes that make it different enough to remain interesting for the relatively short play time. I have no major criticism for it, except that the dash attack can seem overpowered, but even then it requires a bit of timing on the players behalf to go off completely.

Overall, a solid addition to the Shovel Knight series, and a welcome exclusive launch title for Nintendo Switch.