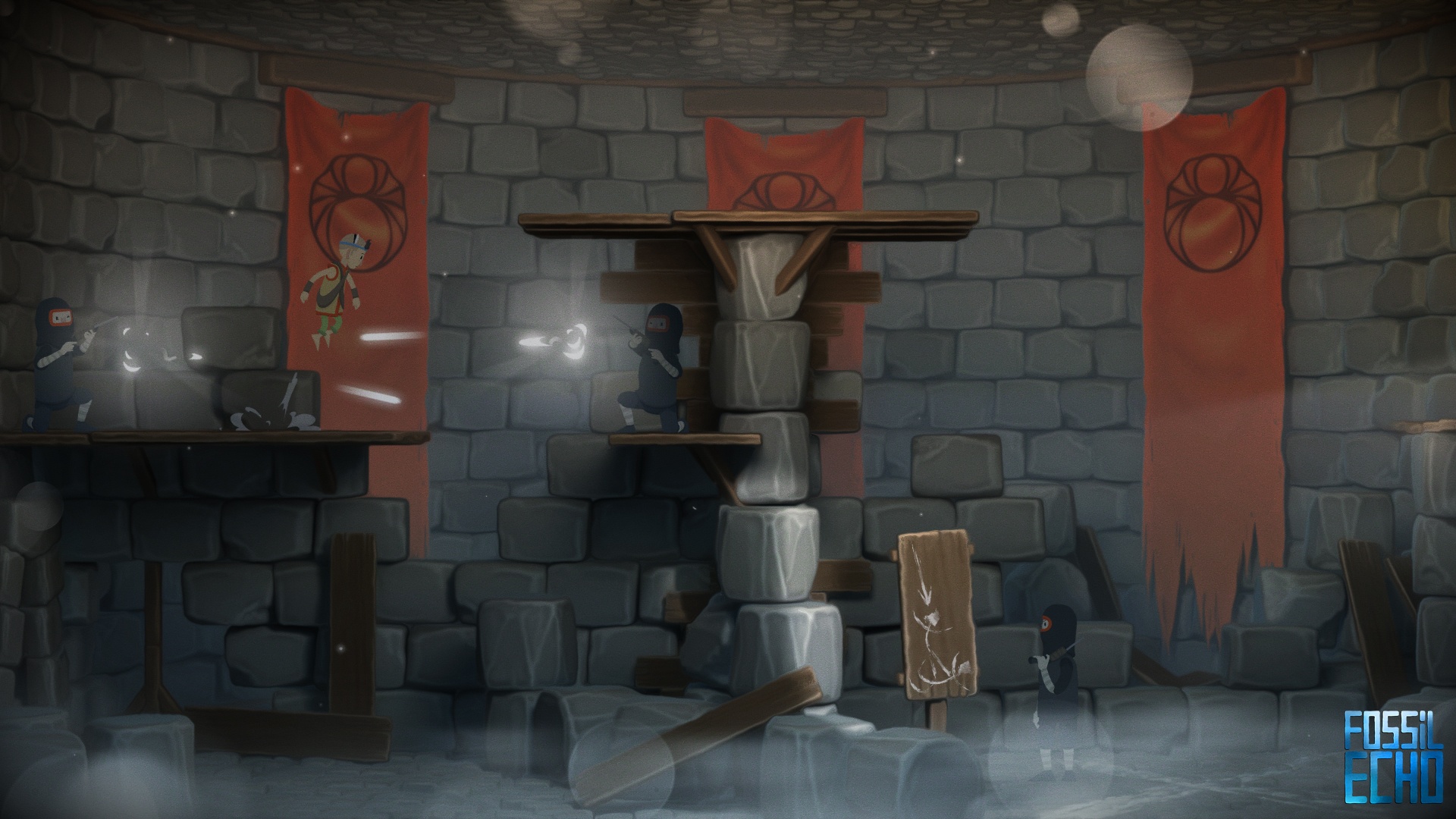 Fossil Echo is an atmospheric puzzle-platformer with hints of stealth. It also has a beautiful hand-drawn art style and a haunting OST. You’re thrown into this world without any explanation, but you have one clear objective: make it to the top of the tower and don’t get caught by the armed men and machines that patrol it.

If you’ve played atmospheric platformers like Limbo, you’ll be familiar with the gameplay and overall challenge level of Fossil Echo. While you won’t be pushing objects to create a safe passage or outrunning huge spiders, your young protagonist will be unarmed in a hostile world and you’ll have to use your wits and creative thinking to avoid certain death. One hit can kill you, though the protagonist of Fossil Echo–I’ll be calling him “The Boy” from here on–is a bit hardier and can survive long falls. He also has the ability to wall jump, which is indispensable in reaching higher ledges.

Fossil Echo can be played with your keyboard or a controller. The simple controls require you to move with right stick/WASD and jump with A/Spacebar depending on which you choose.  Both work equally well and feel responsive. Fossil Echo’s story is told in the form of brief cutscenes wound seamlessly between platforming sections. There’s really no way to summarize it without spoiling it, so I’ll just leave it at that. 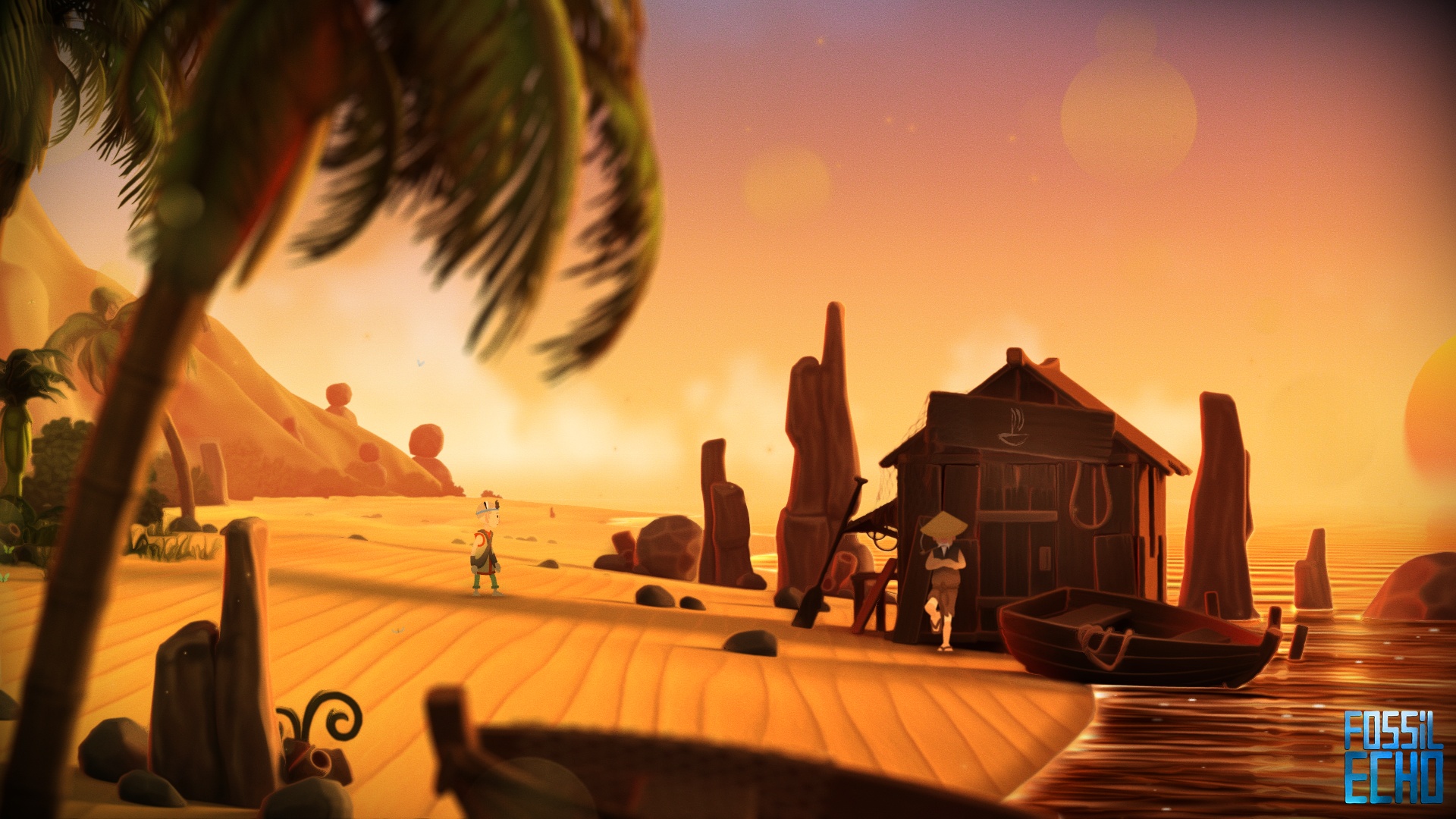 Platforming sections are short runs from point A to point B and will typically take you no longer than a minute or two. Some have enemies which can be dealt with in one of three ways:

1. Avoiding them. Guards pace or turn to look in the other direction on a timer. If you time it right, you can avoid detection.

2. Stunning them. The boy doesn’t have a weapon or even a way to attack, so you only real option is to jump down on your target, incapacitating human target and destroying mechanical ones. Timing is still a large factor have because you have to avoid detection by remaining enemies.

3. Hiding. This is only really applicable in the sections specifically made for it. There are shadows to duck into and avoid detection. Otherwise, stumbling into an enemy’s line of sight spells certain death due to the lack of objects to duck behind or the ability to crouch (that and the A.I. fires off WAY too quickly to dodge).

Even on easy difficulty, these puzzles require a bit of trial and error to solve.

There are also segments where the feathers in the boy’s headband are pushed upwards by the wind. This event leads into a more precise platforming experience as you have to move swiftly upwards and missing a step mean losing all sight of the feathers and having to start from the beginning of the segment. The camera pans upwards as you go, a constant reminder to pick up the pace. These sections were a nice break from the norm, though they ultimately  cannot

The game also has optional challenge sections that are introduced in the form of dreams. Periodically, you’ll find areas where The Boy can bunk down for the night (these and other objects and people that can be interacted with are indicated by the addition of black bars on the top and bottom of the screen, akin to the narrowing of a gaze) and pressing up will prompt him to start a fire and go to sleep. In his dreams, you’ll meet other characters and also find puzzles that will challenge your timing and dexterity. 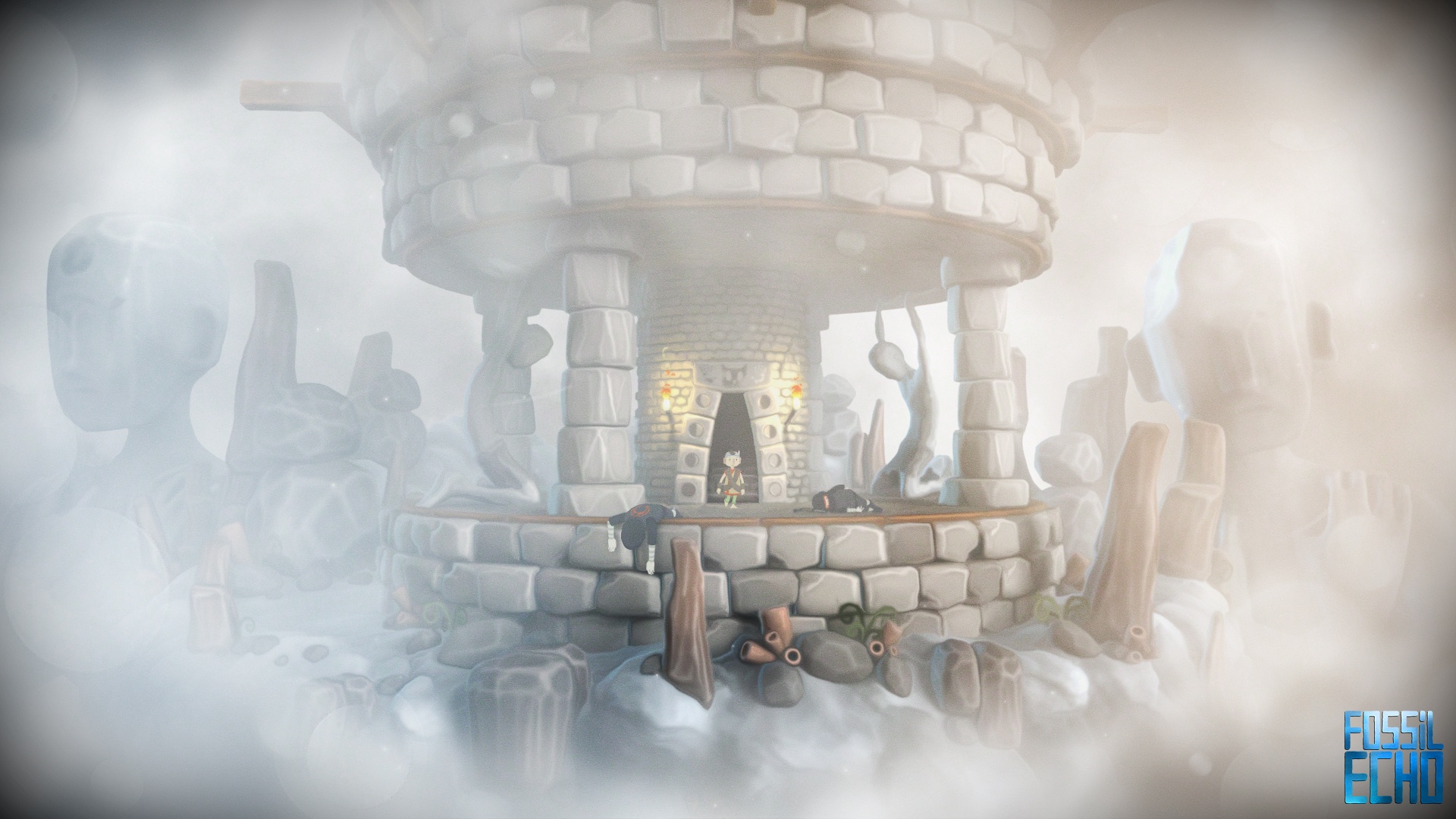 These puzzles, while difficult, are the same get from point A to point B formula and do nothing to add to the experience except to pad your game time. Being rewarded with a vague, nonsensical cave drawing after struggling past a particularly difficult platforming section didn’t fuel my desire to try subsequent ones, either. There’s no real reason to attempt these frustrating puzzles; no collectibles no story segments and no sense of accomplishment.

Fossil Echo’s ultimate downfall is its lack of content. The art and music are lovely, but that doesn’t justify the $14.99 asking price when a leisurely playthrough will take you no more than five hours to complete. In fact, there is an achievement for beating the game in under 45 minutes. Speedrunners may relish that challenge, but the average gamer won’t be happy to know that the entire game can be condensed into such a small amount of time.

I do recommend Fossil Echo, but only at a steep discount. There’s just not enough here to justify the full price despite the fact that what is here is an enjoyable puzzle platformer with a carefully handcrafted art style, a peaceful relaxing OST, and a good measure of challenge.