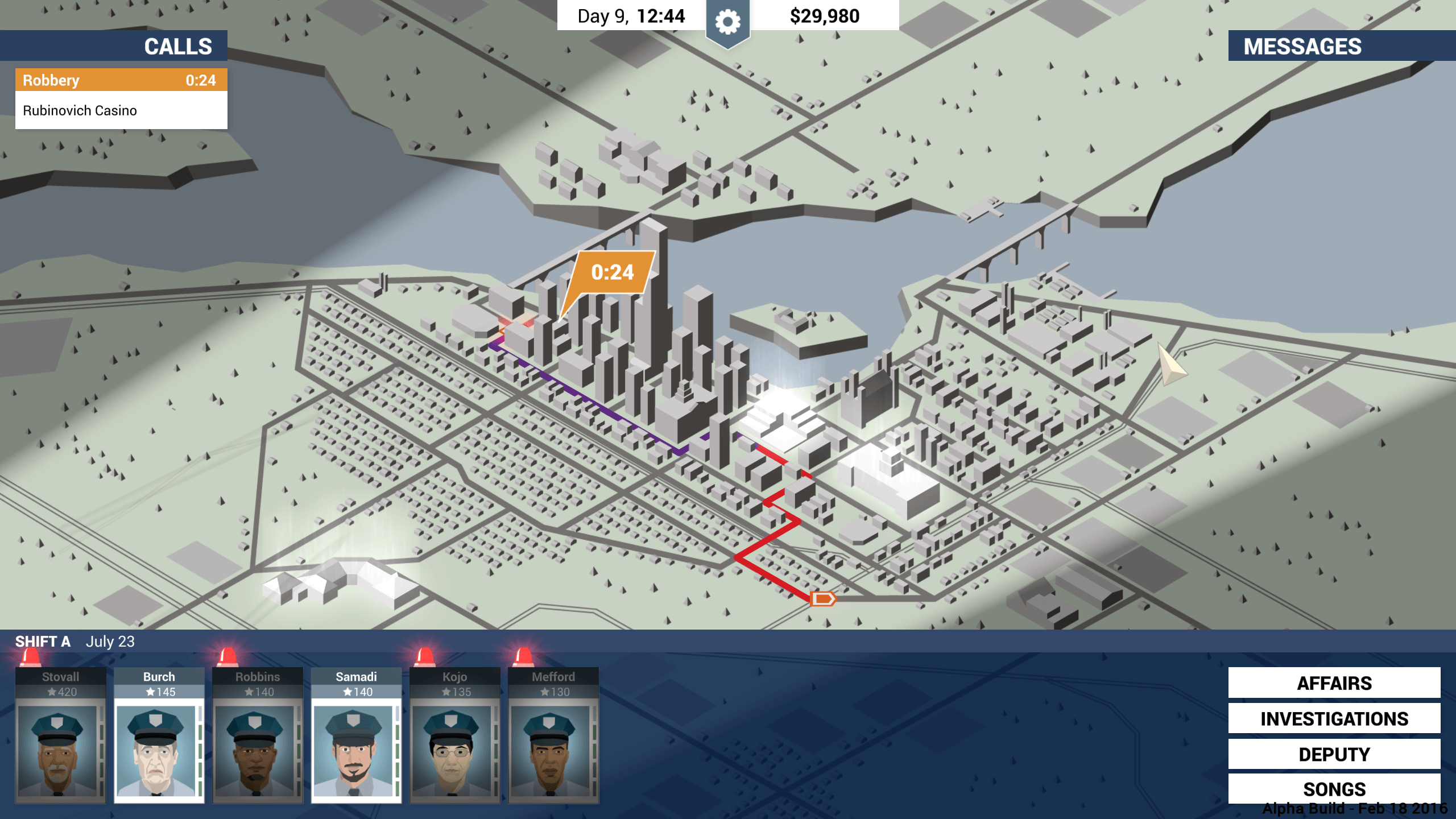 Let’s be honest, the police are pretty much despised in video games. Usually, they’re there to spoil all the fun we’re having, chasing us down the highway mid-rampage to throw us in the slammer, or worse, pump us (and our sweet stolen ride) full of hot lead. Hell, back in the PS2 days I made it my personal mission to see if I could rack up a million cop-kills in GTA San Andreas because I hated those protect-and-serve buzz-kills for all the flack they gave me for killing  a few measly hookers. What was I supposed to do, let them KEEP my money after sex? Pffft. This Is The Police changes things up a little by reversing the traditional role and making you the police. The chief of police, to be exact.

Set in a city plagued with crime and corruption, you assume the role of Jack Boyd, an honest and hardworking guy trying his hardest to retire with a little dignity and set aside a nice little nest egg for himself. You’re given one hundred and eighty days to earn a cool half-million, all the while trying keep the city as crime free as possible. You don’t patrol the streets yourself though, as the chief of police it’s your job to run the precinct, assigning officers and detectives to crimes as they happen, hopefully catching the bad guys and keeping the civilians safe and sound. I never thought I’d say this, but I have a newfound respect for the video game fuzz. It’s a hard and thankless task, riddled with danger. 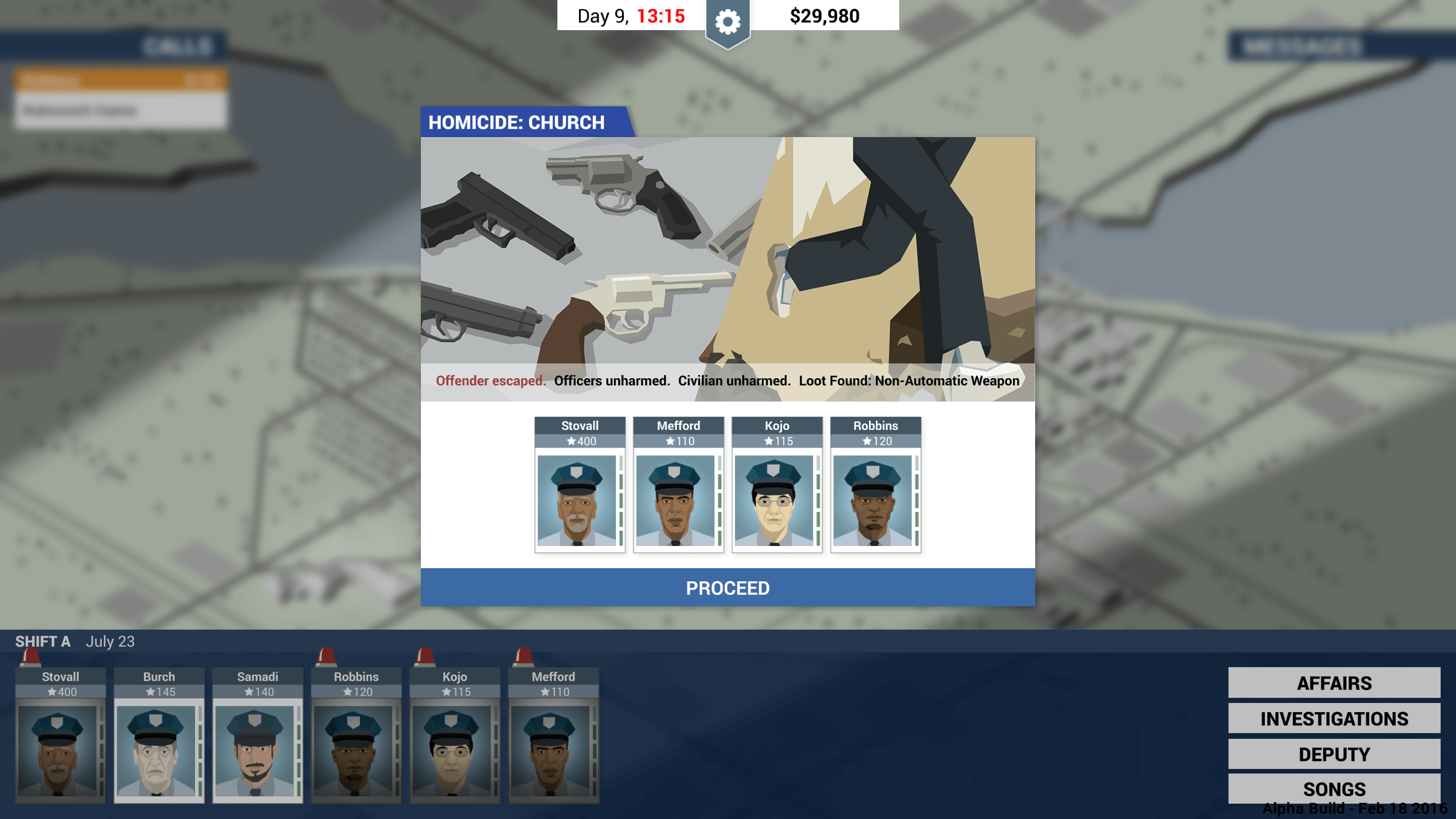 You’ll spend most of your time staring at a map of the city. As the day progresses, various crimes will pop up and it’s your job to assign officers to each case. Unfortunately for you, all cops are not created equal. Each of your staff has a rank, the higher the number the more effective they are at their job. Each successful assignment will up their ranking slightly, whereas botched jobs will bring it down. Just sending your best guys every time isn’t an option either. Once you send them out, they’re unavailable until they return to the station, and as crime never seems to take a break, it’s never too long before someone else needs your help. Sending a rookie or two alongside the seasoned veterans will often force them to pull their weight and yield better results, so it’s often best to send a mixture of the good and the bad to each case. Understandably if you just send crap officers or none at all, the perp is likely to escape, or kill a bunch of civilians. Dead civilians make the mayor look bad, and if you piss him off, he’ll cut your funding and force you to fire staff, and without them, crimes go unsolved and criminals get away. Talk about a vicious cycle.

In addition to the run-of-the-mill larceny and murder, special cases will pop up that require the skills of your detectives. To solve these you’ll need to slot picture-like snapshots into place in the case-file. These snaps can be misleading so you’ll need to glean as much information as you can from the eyewitness accounts and send your best detectives. Better detectives will yield more snapshots, but it’s still up you you to piece it all together. If you get it right, the case will be ready to close and you can send in your guys to make the arrest. If all of this wasn’t enough, you’ll be asked to send officers for various favours to people around the city. From city hall to the Mafia, nobody will ever leave you in peace to do your actual job, and while these favours will often yield rewards (or stop the mayor from further cutting your budget), they tie up precious resources. It’s up to you to juggle these tasks until the end of the day, hopefully doing enough to keep your head above water and earn that sweet half-mill to retire. 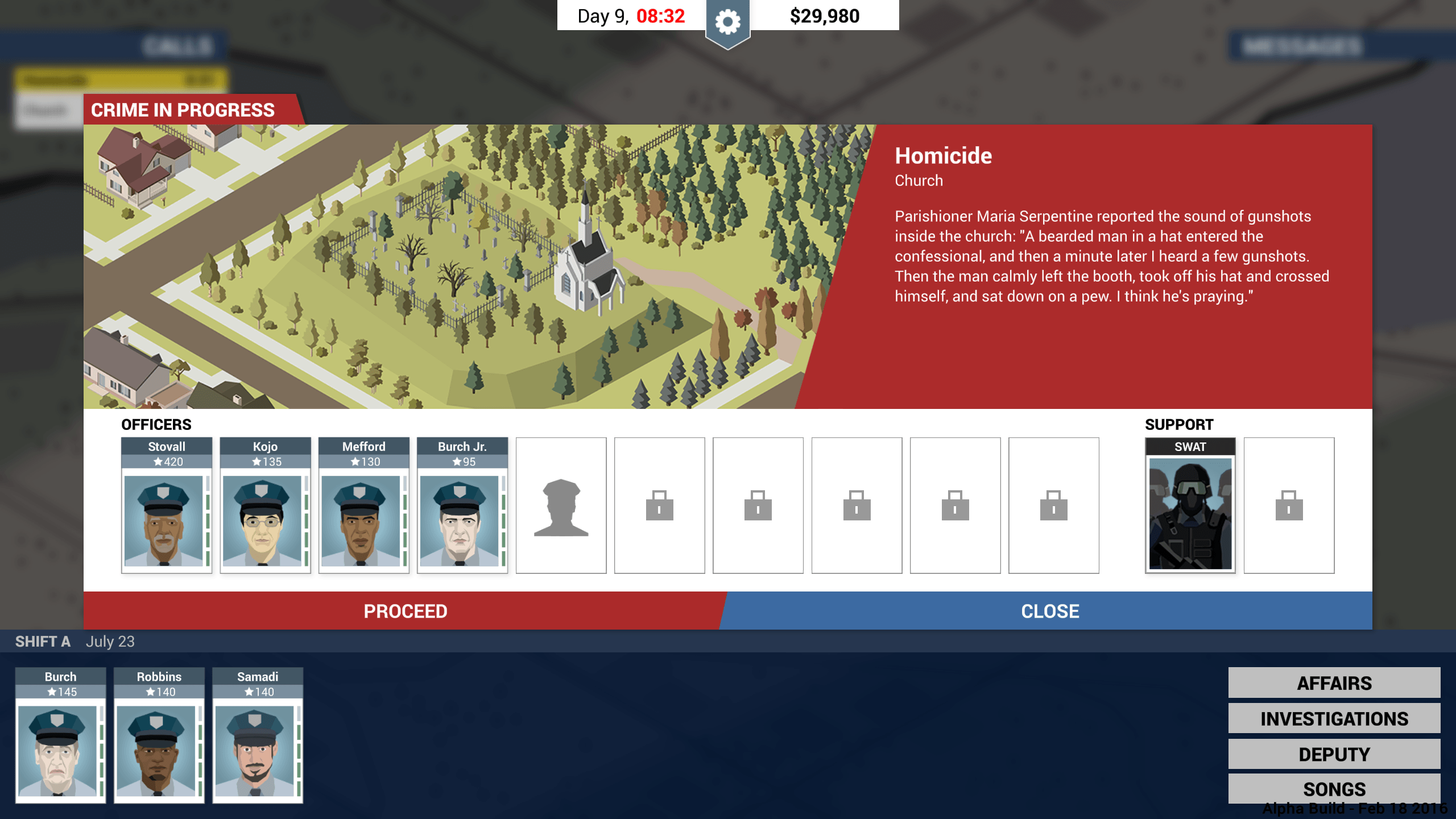 It’s not all staring at the map though. This Is The Police has a superb story tied in with it, presented in a comic book style similar to Max Payne. I don’t want to spoil anything, but it’s a gritty tale of one man’s struggle to stay afloat and the voice acting is absolutely top-notch. Through these cutscenes, you’ll be asked to make choices that affect the rest of the story. One early choice had me deciding if I was going to help an old buddy in too deep with the mob, or let him go on his own, and while this particular choice didn’t affect the gameplay at all (either choice has you taking his place and working with the Mafia, but working with them is an important gameplay mechanic, so I’ll let it slide), the comic-like cutscenes changed accordingly. Other, more important choices are made available through the game which actually have an impact, like deciding which mob family you are going to help, and some of them will come back to haunt you later on down the line. The presentation of the entire game has a simple charm to it, and while the visuals aren’t exactly mind-blowing, they are effective and stylized.  The sound design and voice acting, as I just mentioned are amazing. You’ll even get to choose what music plays from a catalogue of jazz and classical music, so you can tailor the feel of the game to your mood. I personally prefer a bit of Chopin, but its up to you.

I’m going to play this more because I haven’t finished it yet, but it will probably only get the one playthrough. The story is captivating enough to keep me interested, but sometimes the day-to-day running of the precinct can feel like a bit of a chore. One hundred and eighty days is a long time, and I can manage about ten in-game days before fatigue sets in. Watching a squad of your finest get wiped out in a seemingly innocuous burglary can really sap your morale, as I really grew attached to some of them, but I guess thats the beauty of the game. How you build up your retirement fund is also up to you, and having the choice to go straight-edge or slide into the murky waters of corruption is a really nice touch. Just make sure you let the rest of the team wet their beak, or it’ll come back to bite you in the ass. Overall this is enjoyable for a few hours at a time, and will easily give thirty plus hours of gameplay. It’s a simple concept with fairly strong exectution, and an exceptional noir-like feel to it. Plus you get to act like all those police captains you see in the movies, mayor breathing down your neck and all. Good stuff, if a tad repetitive at times.