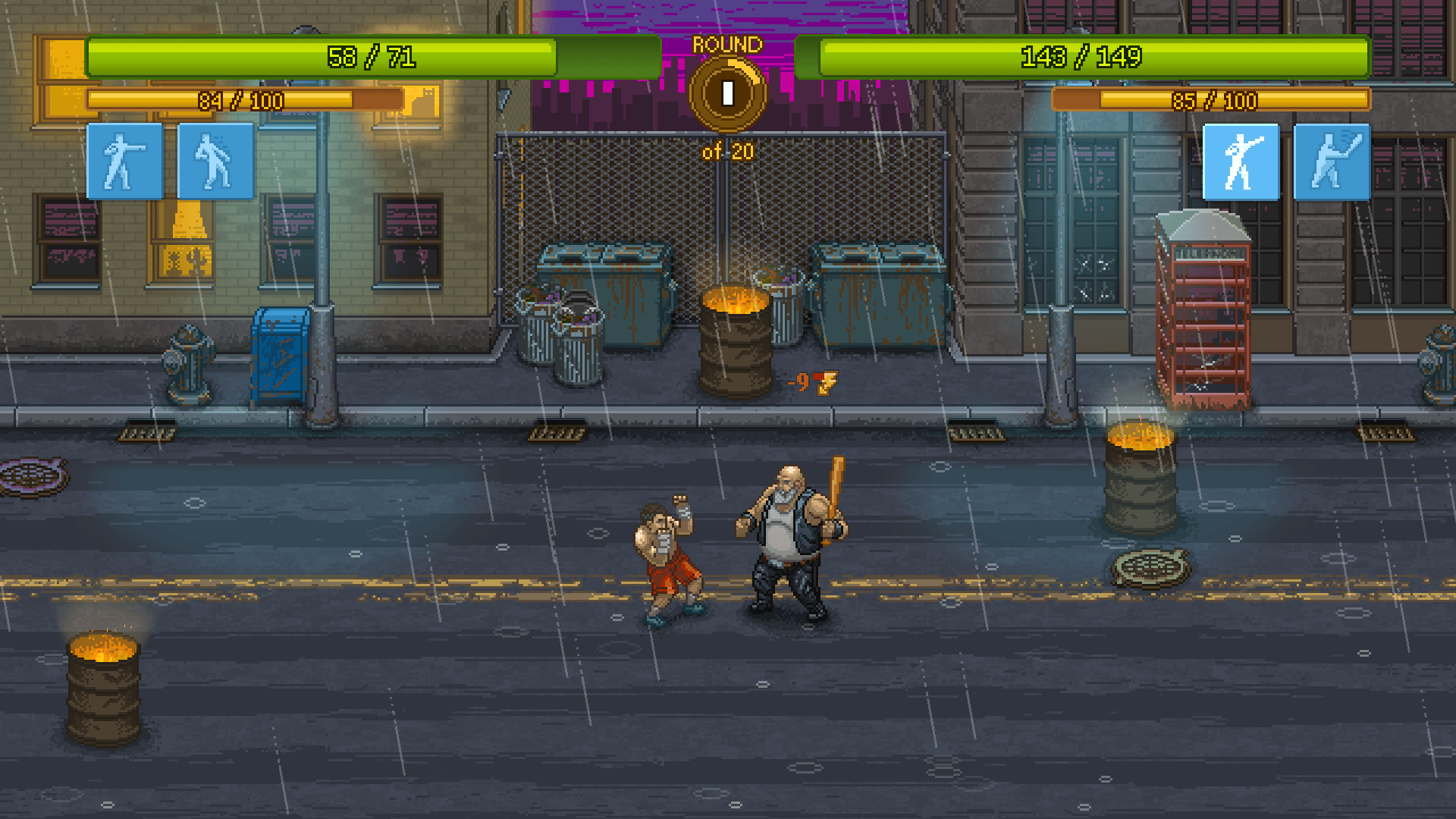 I’ll admit, it took me a while to figure out what in the hell was going on with Punch Club. After watching  an intro ripped straight from an eighties action film and naming my character, I was thrown into my first fight. I’ve been playing fighting games since I was knee-high to a grasshopper, so I expected to perform reasonably well. Picture me, fervently hammering all the buttons trying to figure out what I needed to press to throw a punch, only to have my dude throw a few weak jabs at random and get crushed by a meathead with a baseball bat.

Admittedly everyone loses that fight, but I was still baffled. Why wasn’t my guy throwing punches when I told him to? Why couldn’t I move? Then it dawned on me. This isn’t Streets Of Rage. Punch Club is a management/simulation game. Victory isn’t achieved by chaining together combos or fancy-pants footwork. Your little 8-bit brawler has mind of his own when it comes to battle, it’s up to you to make sure he trains hard and uses the right moves for the job.

When I regained control of my character after the brutal beatdown at the start, I found myself in my apartment. After a brief call from a friend advising me to go get a job, I headed into the garage to get some pushups done. I saw immediate, albeit slight, results. Although each pushup raised some of the three main stats (strength, agility, and endurance) at random, it also drained my food and energy meter. To make matters worse, doing pushups became less effective the longer I did them, and after a certain point, my dude would just outright refuse to do anymore. I needed to hit the gym, but with a ten dollar entry fee, I’d need a job first. 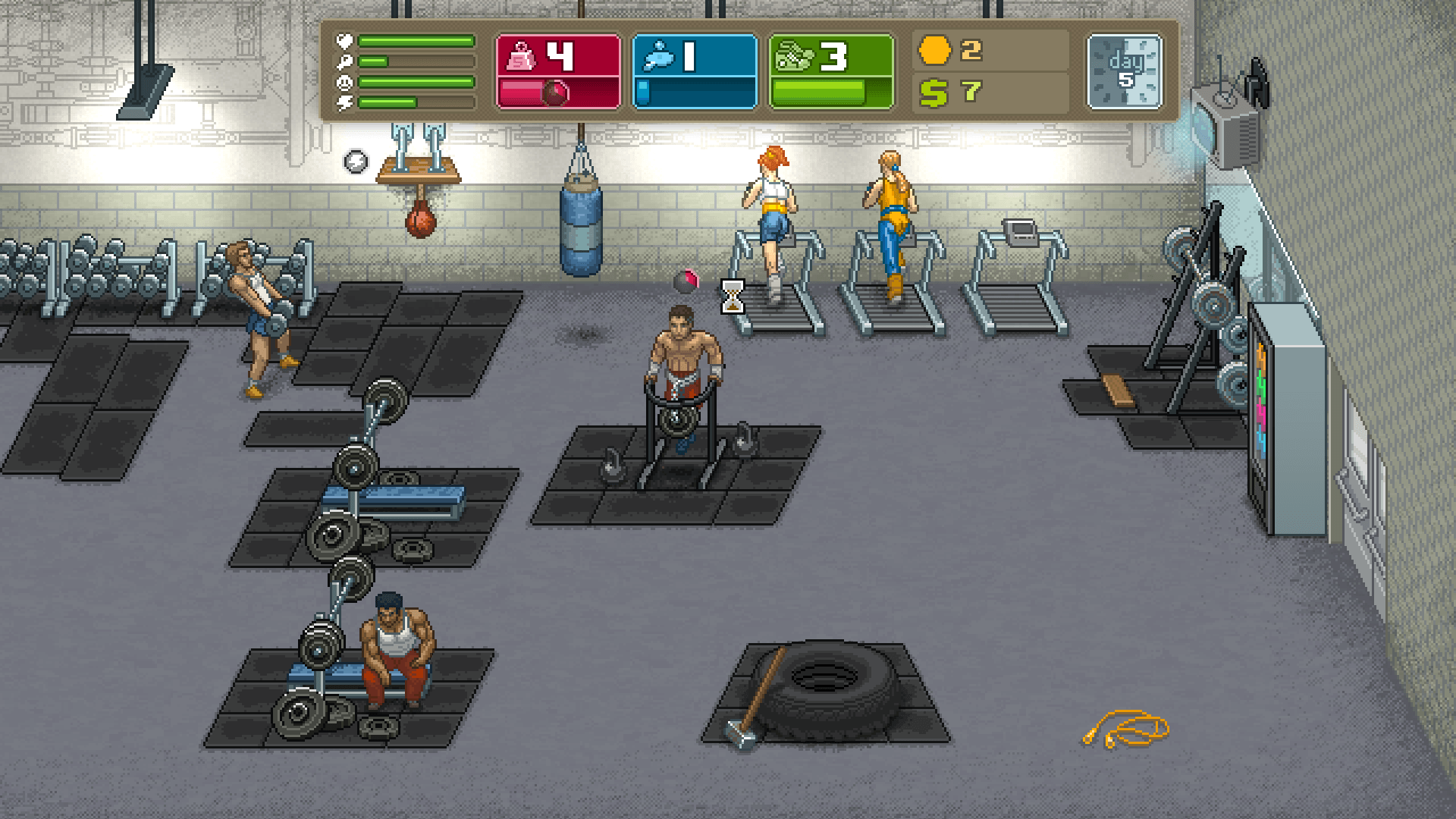 The local construction site was hiring, and would pay me fifty dollars if I stayed there long enough to fill a little job meter at the bottom of the screen. I managed to fill it twice before my guy was too tired to work anymore. I went to the store to buy some food, and headed home to get some sleep. At the end of the day all of my stats degraded slightly, but with fifty dollars left, I’d be able to hit the gym in the morning. After a session using their machines, I felt confident enough to sign up for a fight that was happening in a couple of days time.

I picked which moves I should use during the fight, and won by the skin of my teeth. This is a cycle that would continue for quite some time, because just like in real life, I’m pretty poor at managing my time. I wanted to be in the gym training (very much unlike real life), but I also needed to eat. Spending time at work is fine and all, but if I didn’t train, I’d lose stats. I also needed to sleep. If I didn’t participate in fights, I wouldn’t get any skill points to buy more moves. If I didn’t hit the gym, I’d lose my fights. After a while though, I found my rhythm. I’d work a full day, buy food, sign up for a fight, and spend the next couple of days training. It could be slightly tedious at times, but oddly satisfying.

Initially the main aim was to get to fifth in the rookie league rankings, but soon enough, other events unfold that require your attention. You become a superhero. You meet Tyler Durden. You fight knock-off Ninja Turtles. You find out who killed your father and hunt them down. For a management sim, a lot of story occurs and it’s full of pop culture references that a man-child like me found hilarious and cool at the same time. This game feels like it mashed all of my favourite childhood stuff into one cool little package, then told me to go train up Rocky Balboa. 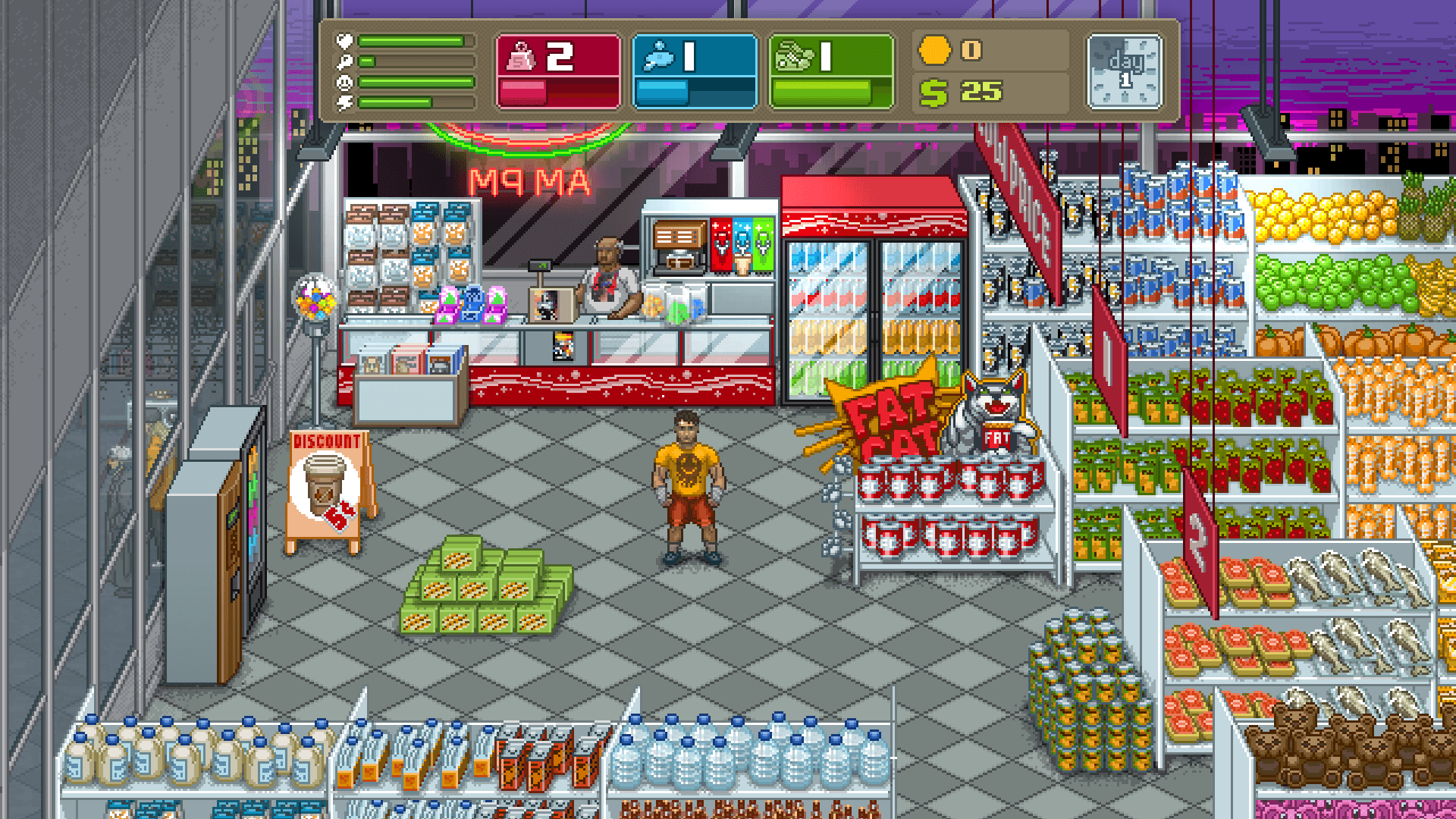 It’s presented (as most indie games seem to be nowadays) in the retro 8-bit style, but if I’m honest it seems to pull it off better than most. Seeing as it’s condensing my childhood into a handy little ball, it only makes sense that it gets the SNES style visuals in there as well. The actual fight animations are pretty basic though, and although Brocky (I know, I have no imagination, sue me) could learn different punches and kicks that would have different effects on my opponents, combat generally looked the same no matter what. It wasn’t game-breaking or anything, I just think a little more effort could have gone into making the fights seem more varied. The sound design also got really old, really quickly. I appreciate chiptune as much as the next guy, but having the same short track on an infinite loop would drive anyone to insanity, so it got turned down and eventually muted after a couple of hours, which is a shame.

I’d say that this is a very unique little gem of a game. It’s The Sims meets Rocky meets football manager. Or something. It can be a bit of a grind though. Watching your stats degrade every day can get quite annoying, and although it doesn’t happen on easy mode, I’ve been playing video games for so long that I physically can’t choose that option. I play on normal or hard. Thats just how I roll. Some of the fights can also be extremely frustrating. There were times when I was actually shouting curse words at the screen because my guy just wasn’t throwing as many punches as I’d seen him throw in previous battles, and opponents I was certain I could defeat would just wipe the floor with me. But thats just the nature of the game, I guess. You can’t win ’em all. But try it anyway. A simple idea executed well enough to warrant a look, and well worth the price.