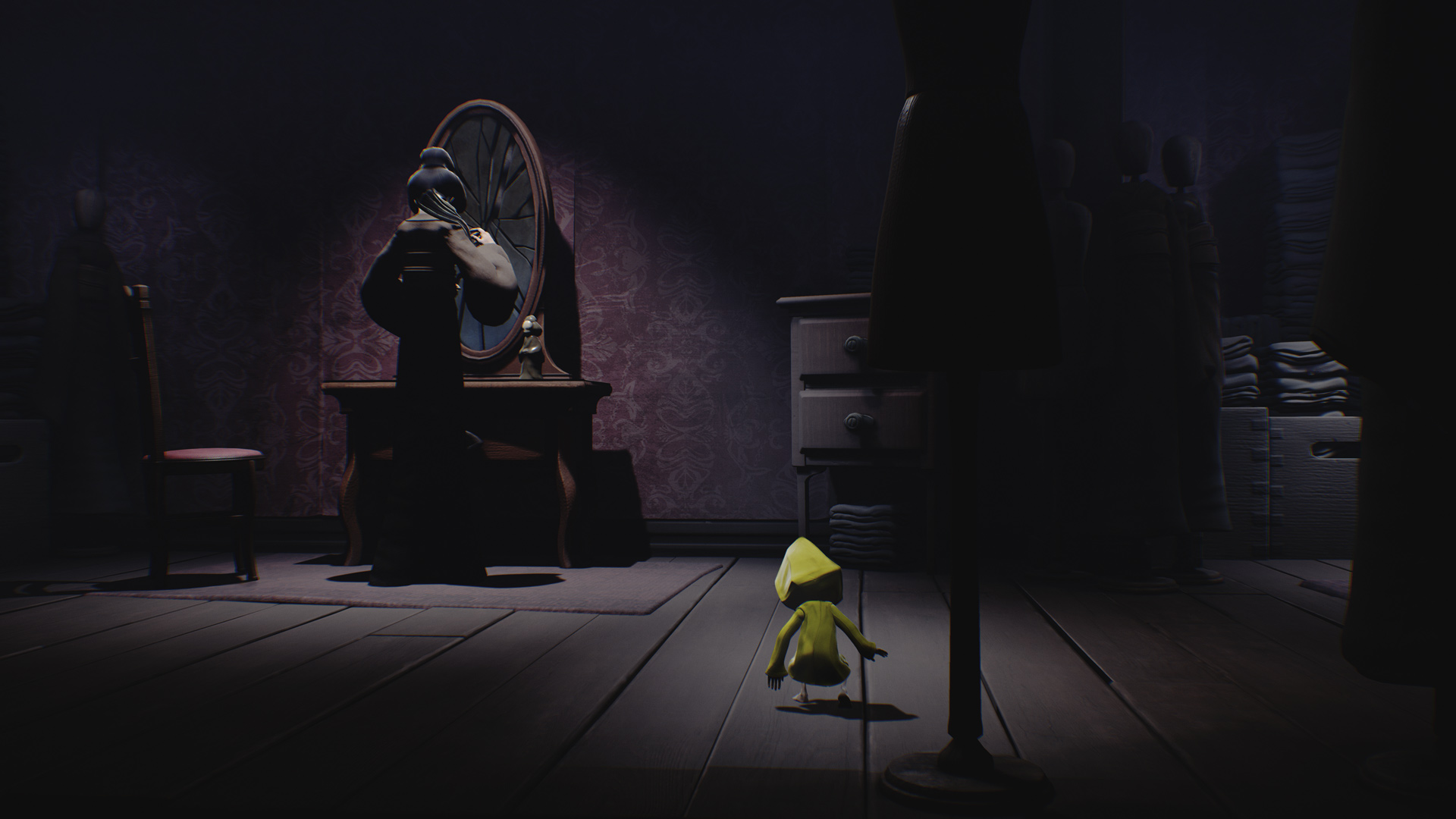 As a kid you play hide and seek for fun. You pick a spot, hide from your pursuer and hope they don’t find you. You quietly giggle under your breath as they walk pass you making you feel accomplished that for just a moment you can never be found.

In Little Nightmares however, hide and seek is a horror game. You run from your pursuer, find your hiding spot, and wait — with only sound of your heavy breathing and heartbeat thumbing in your ears — for a creeping shadow and a pair of heavy feet to pass your narrow view. Once they stop, you stop breathing. They pass, and you’re at relief. And then they come back, you’re caught, and the game is over. It’s a style that horror games are usually built on, but we’re usually most shocked when it’s comes to that split second it being caught, Little Nightmares flips that design to the more frightening moment of waiting to be caught.

Little Nightmares tells the story of a little raincoated girl named six which you carefully and cautiously guide left to right through the sea-swaying innards of the Maw (and ocean facility with a slowly revealed, despicable purpose) is a matter of avoiding instant-death, and gentle puzzling of how to proceed, though for roughly 5 hours or so of actual playing time, it felt slightly too brief to really take in. 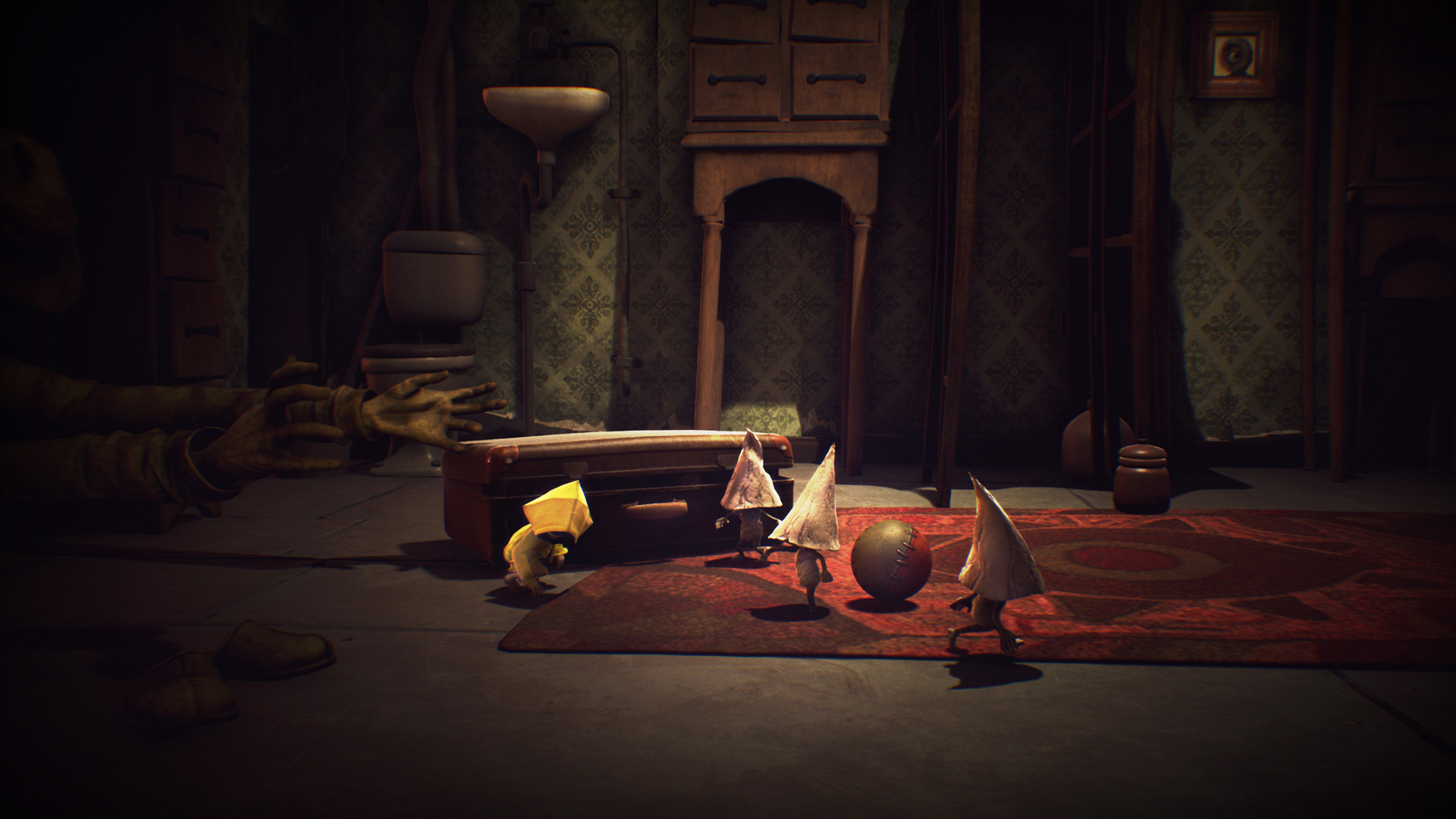 Similar to Playdead’s limbo, and Inside (it’s closer relatives) not because of their similar design of a child in a mortal peril, but how well it binds the concept of puzzle design and storytelling together. Every enemy, every room, every meat grinder you use to make a rope of sausages to swing from, contributes to the story of The Maw and Six’s seeming breakout. It’s quietly clever never more so than in the giant, twisted figures of those trying to stop you proceeding. And although Little Nightmares was enjoyable on all ends, it’s wordless style is a little harder to take in when the story seems more straightforward. Getting to know why Six is, well, the way she is feels as though it would have added to the experience, rather than just throwing us into the pit with very little Intel throughout the entire game. Even bit of dialog or hidden notes to give you a more detailed understanding would’ve sufficed.

As you play through you encounter every nightmarish creature that hunts Six’s dreams. A blind custodian who literally sniffs you out with his grossly long arms reaching out to feel for your presence; twin butchers, fattened and deformed by god knows what; and the ghoulishly beautiful woman in kabuki dress and mask. Making your way through the Maw, every creature each owns their own section of the room that you need to pass through which you’ll even learn more about them and their creepy grim habits as Six’s situations start to progress. In all honesty, some, if not, most of the images you see about these creatures are just a little disturbing, but just enough to bear. The final step after that, make your way through without getting caught; you can either creep past, outsmart them by using the room as your way to get out of a situation, or even the most frightening choice of all, as your last resort, just run straight through and hope that you don’t end up being caught in the midst of that’s going on.

For a horror game, you almost always know where your predators are and what they are capable of doing — you’re biggest fear is them knowing where you are. They’re aren’t really any jump scares in Little Nightmares, but you will hold your breath, or squeal every time you think a butcher will find you when they waddle over to check underneath a counter, or when you’re being chased by just a hair away from being snatched.

The Maw is quite large by comparison to your character which in a way kind of exemplifies the idea of being a child in a horrific life-sized doll house reflecting the child’s view of a giant adult world. It’s such a terrifying setting you can’t help but love it as much as you want to hate it. Though you’re forced to be cautious about how to move about in each location, other rooms have giant soft bouncy beds that you’re able to jumpy freely (of course when the coast is all clear) often help forget that you were just being chased down a deformed madman trying to use you so he can prepare you for his next dish. There are even a few little objects that you can throw around seeing that you are a small child it just feels right to do some damage. Another thing to point out is how well structures of being able to use your surroundings are drawn out, allowing you to build your own makeshift stair case by pulling a few filling drawers to make your escape from enemies, or even moving to the next room much more easier.

As much as I enjoyed all the fun tactile puzzle mechanics, and almost near-death moments that had me laughing as I just barely made it out alive, it’s primary problems where a bit boring. Its one-sided angle often causes for several imprecise platforming which can get frustrating when you jump off the side of a ledge at a wrong angle instantly dropping to your death, instant deaths are occasionally simple trial and error puzzles. On top of that, inconsistent checkpoints and long loading times afterwards can kind of drag on you’re the fear to a point where deaths a more annoying and frustrating than terrifying. These are just small minor issues that the game usually makes for its thrillingly weird, grotesque, and smart exploration.

There’s much more to enjoy, from how you can interact with the little gnome children by giving them hugs leading to them following you around for a little while, to the lovely way Six cradles her lighter while she runs to stop it going out, to the point where you simply cower in a dark place trying to hide the creatures that are out for you, just in case their will breaks before yours. Music, animation, and puzzles are all what make Little Nightmares that much more enjoyable. Even for its very brief 5 hours, you’ll still find yourself wanting more out of it than you’d probably would have imaged.