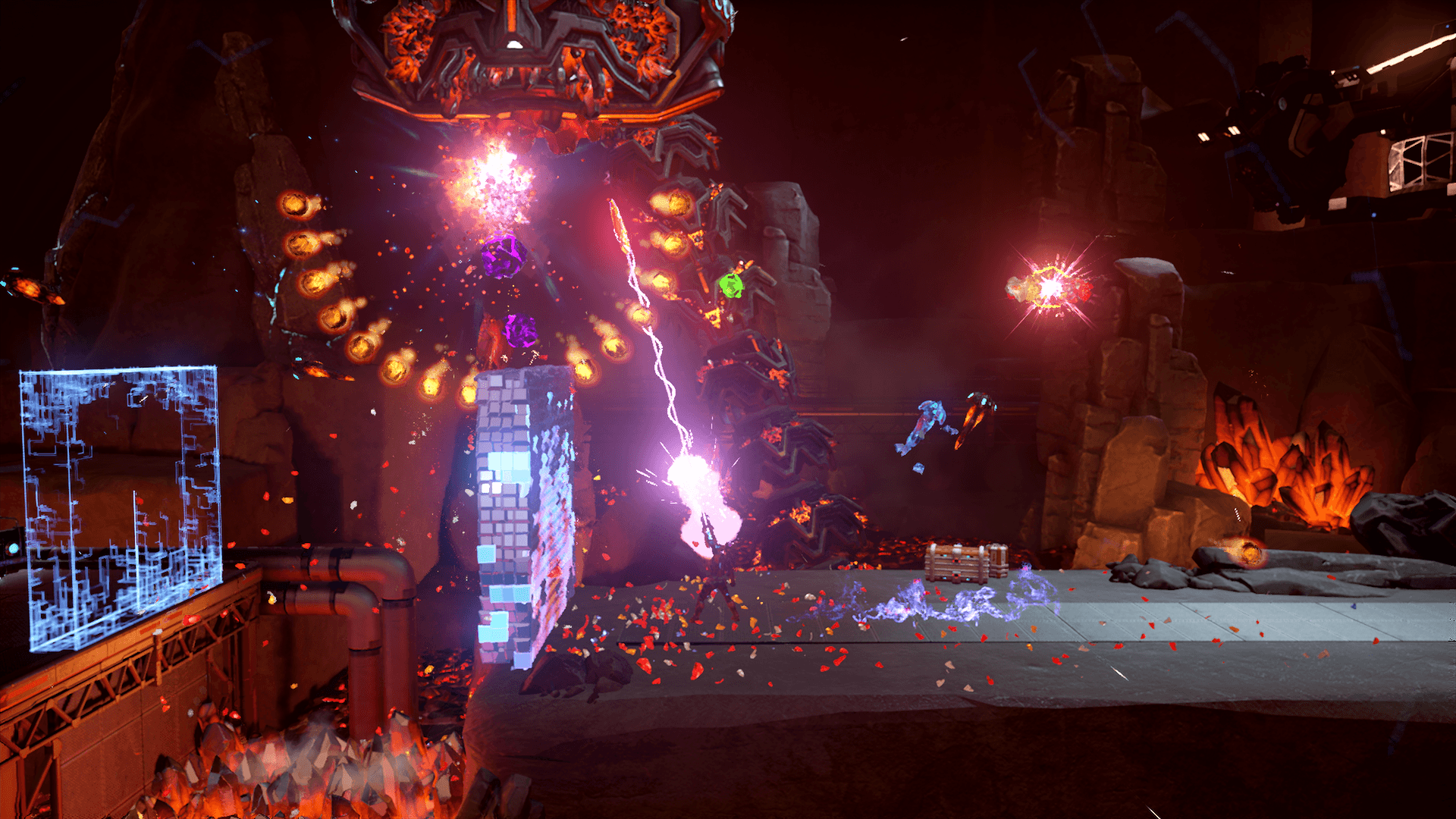 Finnish Housemarque is renown around the world for their fast paced, high intensity shoot ‘em ups and bullet hell titles. And with games such as Resogun and Nex Machina under its belt, one could say that it is the most accomplished indie developer when it comes to arcade action games. And it seems like Housemarque doesn’t want to let that title go, as only two months after it has officially released the aforementioned Nex Machina, it has launched yet another title of the same ilk, in form of Matterfall.

Matterfall, unlike Housemarque’s prior title Nex Machina, is not a top down shoot ‘em up, but a 2.5D side scrolling bullet hell. However, within certain stages, Matterfall can turn from a side scroller, into a top down shoot ‘em up, as zero gravity sections, which are plentiful, force the player to fight off enemies from all 360 degrees, rather than from the usual 180. And the variation which comes with change of perspective is more than welcome, as it forces the player to alter his/her approach to combat, and dissipates the monotony which has a tendency to creep in, whenever one spends too much time fighting waves of enemies on the side scrolling plain.

Core combat of Matterfall, whether within the zero gravity sections or the standard 2.5D segments, is rather simple. You use your left analogue stick to move, and your right stick to fire in direction which you see fit. However, these are just the basics, and in reality Matterfall is much more complex than your average twin stick shooter.

Besides the core left and right stick controls, which feature as standard in each and every title of the same, or similar structure, Matterfall also forces the player to learn a much more complex control scheme which is rather unique. In addition to moving and shooting with your sticks, in Matterfall, you’ll also have to dodge enemy attacks with an L1 dash, which also temporarily disables all enemies in close vicinity. In addition to dashing, you’ll also have to activate antimatter bombs which spawn from fallen some enemies; and in order to do so, you’ll have to charge them with an energy beam, which is triggered with L2. And that’s not all, as in addition to your standard weapon, Matterfall also allows you to use a wide array of additional armaments which can be assigned to either of the d-pad buttons, and while activated, can be used by pressing R2.

The sheer amount of data which has to be processed on the fly, while playing Matterfall is simply astounding. As you don’t just have to worry about dodging enemy attacks, but also about executing combos. Yes, you can just jump around and twist your right analogue stick in hope to survive, but Matterfall is at its best when you utilise its control scheme to its fullest extent. And once you learn that you can double-jump into an upward dash, in order to remove yourself from the battlefield, only to strike your enemies with a downward dash from above while eliminating each and every one of them with a chain of antimatter bombs, only then you’ll notice how nuanced and satisfying the combat of Matterfall truly is.

Matterfall’s core gameplay is incredibely impressive, because unlike other titles of the genre, Matterfall doesn’t rely on continuously spawning power-ups to keep the player interested, but on player’s ability to use the tools at his/her disposal in order to create such ‘power-ups’ him/herself. And what makes it even better is that the combat system, which in a large part concentrates on the aforementioned dash, makes Matterfall an arcade title like no other. 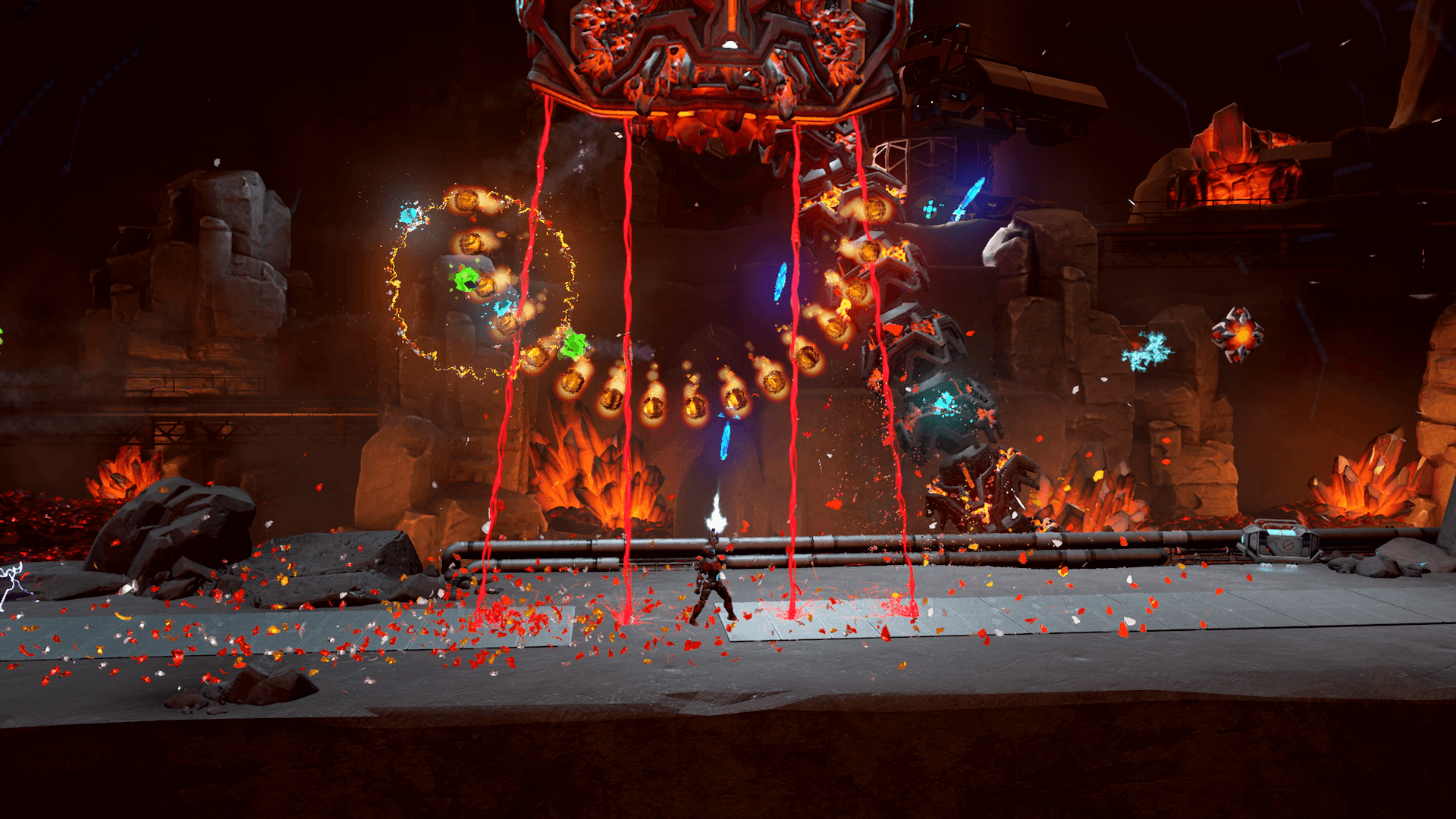 Games such as Geometry Wars, or even the Binding of Isaac, are all about survivability, and therefore force the player to adopt a defensive stance at all times. However, the addition of the dash to Matterfall’s arsenal, forces the player to be on a constant offensive. As the longer one delays dealing with his/her foes, the more cluttered the screen becomes, and at latter stages of the title, a second of hesitation may lead to player’s death, because bullets and rockets can fill the screen in an instant. But if one dashes into the fire the second a combat encounter begins, he/she has a much better chance of survival, as the sooner the first wave of enemies is dealt with, the more likely it is for one to survive the next.

It may seem odd that one would commit so many paragraphs to a single component of a title. But in this instance, the combat is arguably the most important portion of Matterfall, as it is the core of the overall experience. And unfortunately, it is also the only impressive feature which Matterfall posses, as besides the impactful combat, Matterfall is a rather average experience.

Matterfall, throughout its rather short duration, makes an attempt at conveying a story to the player. But said plot is neither captivating, nor exposed enough in order to make any sort of impression. In addition, it seems to be unnaturally disjointed, as the first cutscene takes place prior to the appearance of the ‘’press start’’ screen, and the next appears roughly 1/3 into the ‘story’.

One could argue that story will always play the second fiddle to the gameplay when it comes to action centric titles. But if one creates a title which is all about action, then why bother spending resources, which could have been utilised elsewhere on something so insignificant as a lacklustre, skeleton of a plot.

Uneven distribution of resources can be noticed throughout Matterfall, as outside of the solid combat system, the rest of the title is rather uneven, and at times simply bland. The in-game textures often look unappealing, and out-of-place for a modern title, and despite their low quality, there is also very little variation when it comes to textures from level to level. Apparently, while in game, you move from one level to another by traversing labs, offices, and other facilities, but you always feel like you’re in the same place, as with exception for a couple of locations, all in game locales look the same – which is a shame. 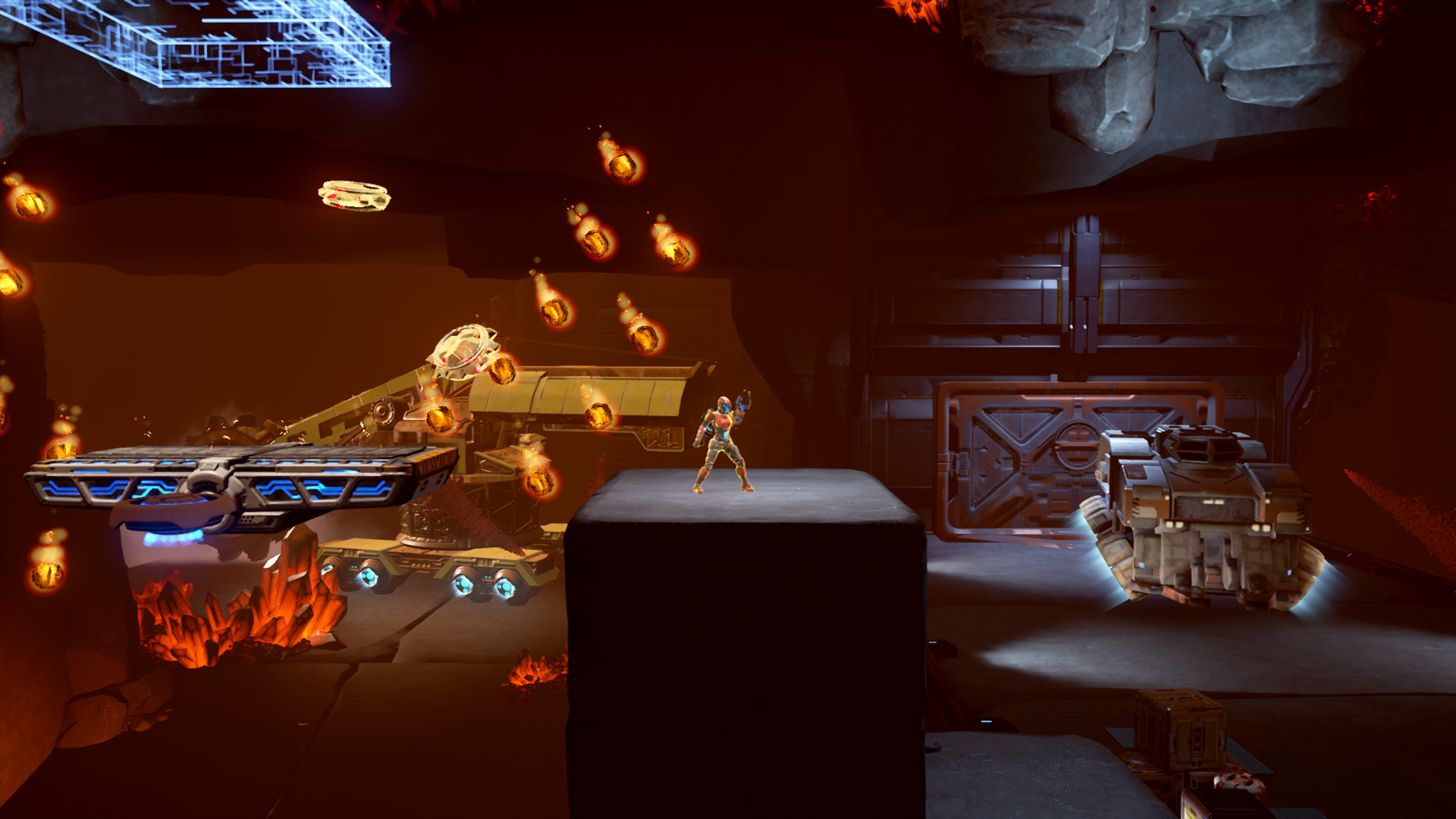 Persistence of same, and or similar textures and models doesn’t only apply to the levels, as duplicates of certain visuals can also be found when dissecting the enemies, and special effects. For example, all the enemies which you’ll find within the first chapter will be exactly the same as the ones within the final level. Some will be more dangerous as they’ll fire more projectiles, but they’ll look exactly the same, but with small colour variations. The title tires to add some variation in the final level of the final chapter, with addition of juggernaut like enemies, but unfortunately it does so too little, too late.

The late addition of the charging juggernaut seems strange, as this particular enemy is added into the fray in the last 20 minutes or so. But his addition is not as odd, as the addition of brand new projectiles, which come into play during the final boss fight. And the only difference between these projectiles, and the ones which can be found throughout the game, is that they possess a different colour, and can be destroyed with a standard attack. It’s like the game comes to its conclusion, the second it really gets going. And it feels like Matterfall may not be the product which Housemarque wanted it to be.

Ultimately, Matterfall feels like an introduction to a spectacular intergalactic adventure. Like a first part of a trilogy. As both the length of the title, which is incredibly short even for indie standards, and the way in which the title unveils its content, make one feel like he/she is just beginning a grand journey through the world of Matterfall. But the second one comes to that conclusion after fighting the sentient excavator, he/she in not introduced to chapter 4-1, but the end credits. And at first it can be quite confusing, but once one puts two and two together, he/she will realise that Matterfall is more like a tech demo, than a complete title.

In its entirety, Matterfall feels like a presentation of Housemarque’s technical prowess. In a way, it feels similar to the original Crysis. But where Crytetk’s tech demo was created to display Cryengine’s visual capabilities, then Matterfall must have been made to showcase Housemarque’s mechanical and technical prowess. And if not for the fact that Matterfall is a technical and mechanical masterpiece, just like Crysis was a visual one, then Matterfall would be nothing more than another average bullet hell, shoot ‘em up hybrid, not worth more than £3.99.