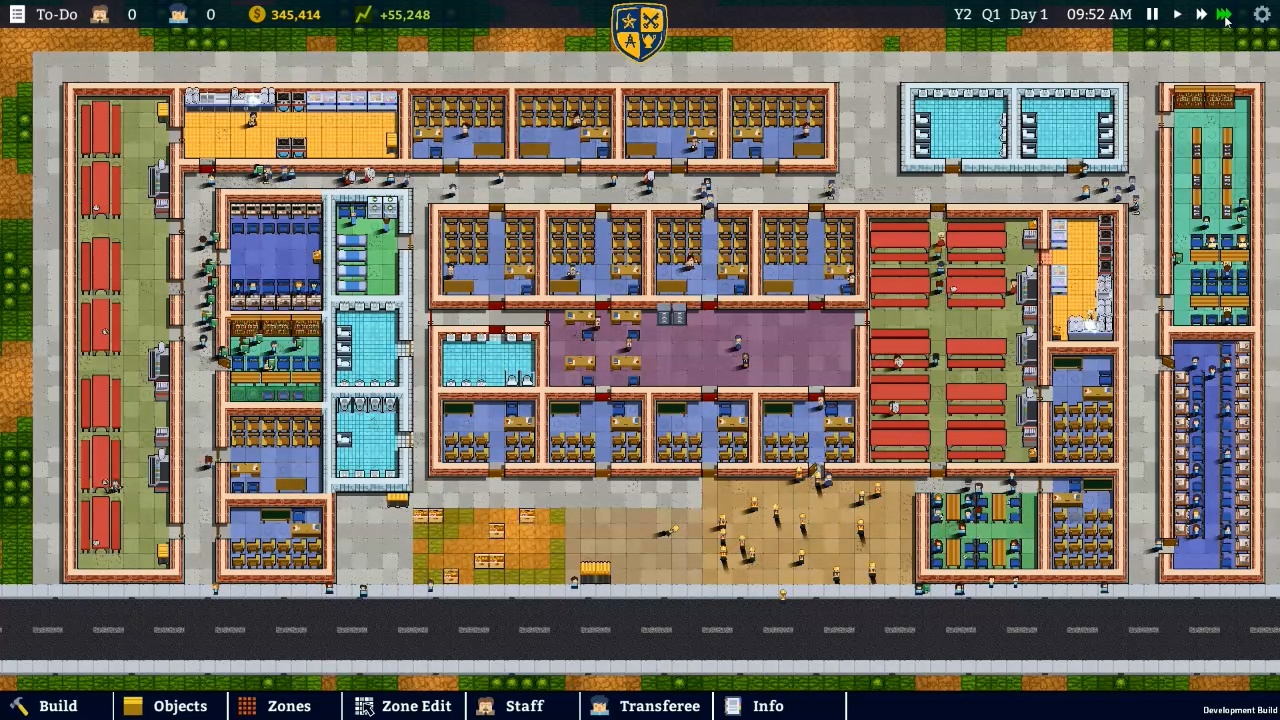 Have you ever, either as a student or a parent, looked at how a school is run and thought “I could do better than that”? Well, now you have the chance with the Early Access release of Academia School Simulator. In this tycoon-style game, you oversee the planning, construction, and running of a high school.

The premise is simple – starting with an empty plot of land and a handful of workmen, you have to open a school. In the beginning, one classroom, a kitchen, and a cafeteria is enough. However, in order to bring in more students and generate money, you have to expand. It is not all classrooms and lunch halls though. An array of school locations is available to be built including the library, the janitor’s room, a computer lab and more. You are encouraged to construct these through a series of grants offering cash up front to get building a bonus upon successful completion.

As with most other tycoon games, the task becomes ever more complex as the school grows. Each ‘zone’ has minimum requirements for space and equipment and you will need to plan carefully to fit everything in neatly. As more students enrol, you will need more facilities. More students also means more mess and the need for a team of dedicated janitors. You will need teachers (of course) and other school staff such as cooks and nurses. This will all eat into your budget and the game increasingly becomes a balancing act to keep revenue up and respond to the needs of your growing school.

The fact that there is not a tutorial at present (the developers have said that one will be included in the future) makes getting to grips with the game a process of trial and error. I personally had to restart the game several times as I figured things out and then decided to return to the beginning with a better plan. When well executed, this can be a strong feature of tycoon/sim games as you learn through playing and eventually find success. When poorly executed, it can lead to frustration. Thankfully, Academia draws the player back in to try and make something better. The grant system provides enough guidance and direction for new players and, despite being a recent release, there is already a community of players sharing tips with the developers also active on forums. 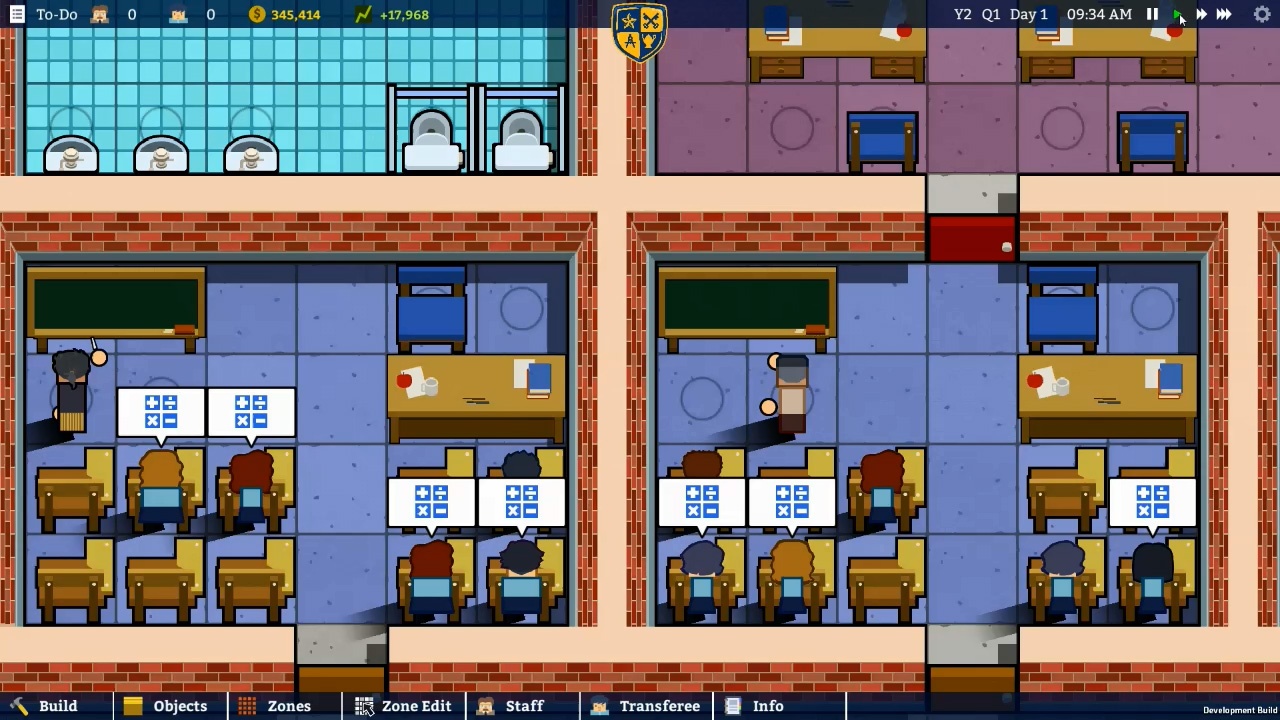 The trial and error process can lead to some amusing moments. In one case, all was going well until I realised there were yellow blobs appearing around the school and warnings that my pupils were getting sick. Closer observation revealed this was due to me not having yet built any toilets! I made that my priority for my next grant and the students’ health (physical and mental no doubt!) improved instantly.

Visually, the game employs a top-down view with retro graphics. If you think there is a resemblance to Prison Architect, that is because Ryan Sumo, the artist from that title, is a member of the Academia development team. The sprites, though simple, are endearing especially in close-up as they go about their daily tasks.

This title has just been released to Early Access, meaning there is more to come in terms of features and improvements as well as a few bugs to be ironed out. The first issue is that without a tutorial or hints system, some actions are not immediately obvious. Going back to the toilets example, I was required to make separate ones for male and female students but I could see no apparent way to assign them. Both loos ended up being unisex and it took a video guide to show me how to do it.

There is also a lack of an undo button. While adding walls, doors and furniture with the game paused, it is easy to make a mistake but not so easy to correct it. In such cases, I had to wait for the workers to come and then demolish or dismantle the erroneous item (unless there is an undo option that I have somehow missed).

The different areas of the school are marked by ‘zones’ (classroom zone, toilet zone, library zone, etc.) While the properties of these zones can be adjusted (that is how I finally got my male and female toilets), it is not possible to expand them. This caused an issue as my ‘delivery zone’ started to fill up with boxes which my workers were constantly shuffling around trying the find space. I tried to add to the existing zone but was told that my new area did not meet the size requirements. That meant building a separate area and waiting for one worker to do it because all the others were holding delivery boxes!

The other main issue is with the in-game menus and announcement. These come in the form of pop-up boxes that have to be manually dismissed one-by-one. If you don’t close them, they remain even after the information is no longer valid, leading to an at times cluttered screen. 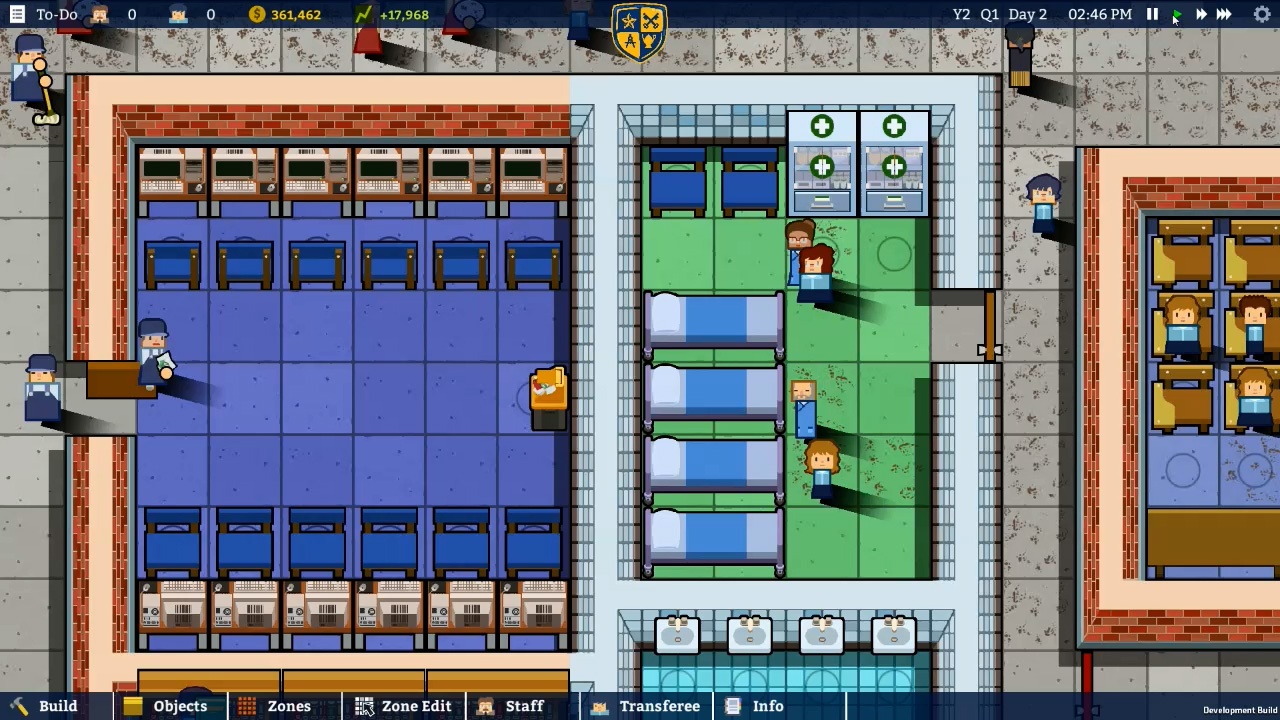 I have not encountered any major bugs so far. The only things to affect my saves were criteria for completing a feature not being met even though they were. In one case, I was told my kitchen was not complete and needed a sink even though one was already there, and in another, my staffroom was flagged for not being indoors despite being surrounded by walls and sandwiched between two classrooms.

The good news is that the developers are very active, responding to players’ feedback and giving regular updates, even allowing public viewing of their Trello workspace so updates and features coming soon can be seen. The links to the Prison Architect dev team are also promising as that was a game that did early access right – hopefully, Academia will be the same.

Future additions to the game include cosmetic items to give your school and more unique look and feel. There is also the promise of having to deal with issues within the school such as responding to cases of bullying and truancy. Requirements to keep staff and students happy will also be included to avoid strikes, which will add a layer of complexity to the game.

As Academia is still in the early stages, it can’t be fully recommended as a must-buy game. However, I can say that it is very promising at this stage. As a tycoon game, it is fun and draws the player in to try and make a better school on each attempt. Future updates will add more features and a greater degree of challenge. With a committed development team, we can expect Academia to ultimately make the grade.