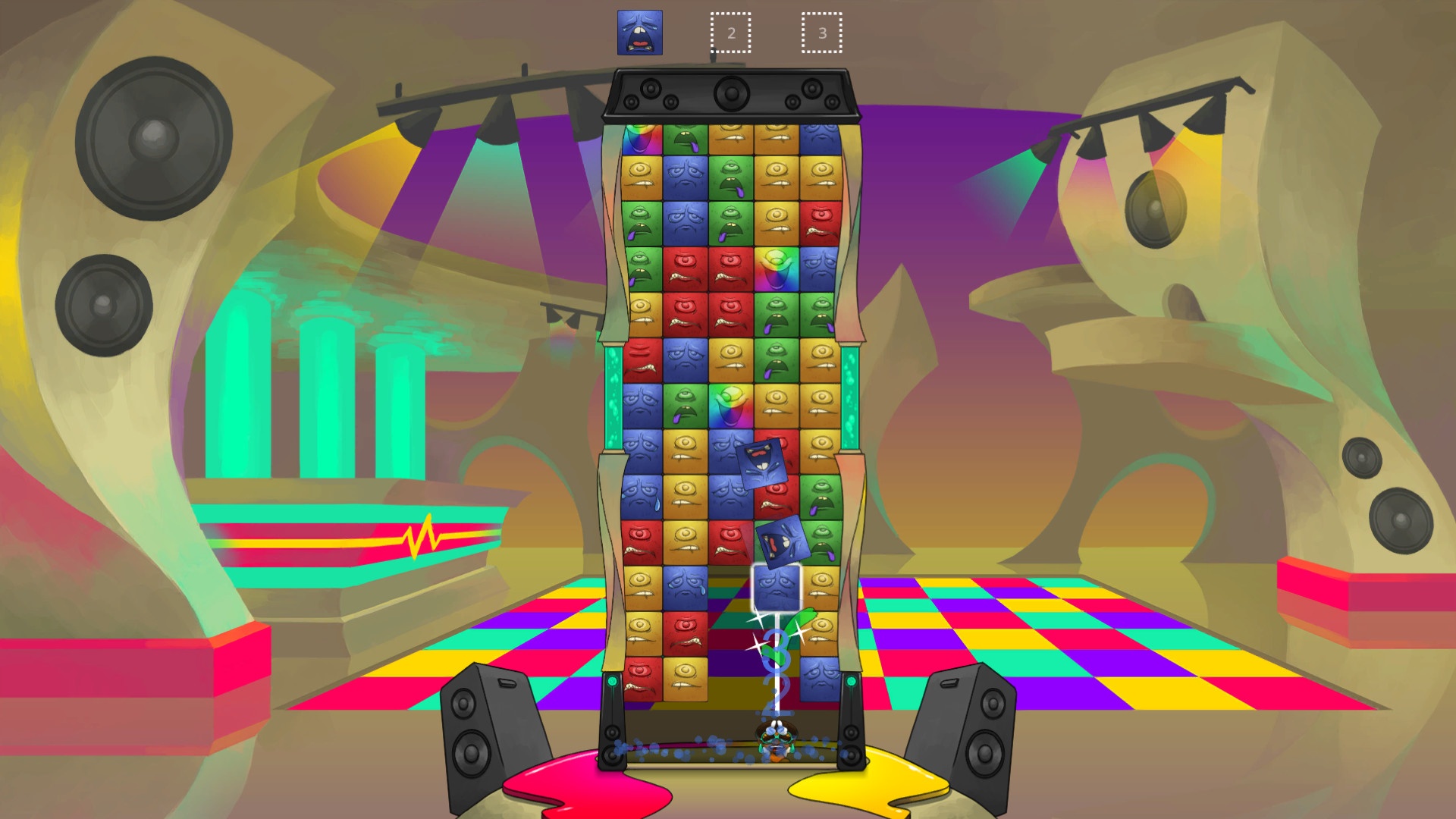 Puzzles, puzzles everywhere, and no shortage of new versions in sight. The Nintendo Switch has become a magnet for puzzle games in the last few months. I’m not complaining: there have been some really good releases, and I still pick up Sparkle 2 whenever I am at a loss for what to play but want to chill. But puzzle games can easily become a chore to play if not handled properly. Things get repetitive, you find yourself in the same exact place time after time with very little progression. And, worst of all, some can feel downright unoriginal and familiar in that “oh boy, mom made meatloaf again” sort of way. So I really appreciate that Tumblestone brings a bit of freshness along with a wide variety of play styles.

The concept is simple. As a vertical puzzle game, you have a bunch of different colored blocks with various expressions of anguish hanging out at the top of the screen. Zap three of the same color to make them all disappear. Make them all disappear and you’ve won. There’s not much else beyond that, at least in core mechanics, though there are a couple of interesting block variants that show up in certain cases. There’s multicolored blocks, for example, that can be used for anything, but may be necessary to only be used for certain combos. Additionally, there are grey blocks that cannot be matched, and won’t move until you can clear out every other block in the row (or, in some cases, blink in and out of existence). Tumblestone has quite a few variations on how you need to deal with the puzzles as you experience them, but the key idea of simply cleaning house never really leaves. 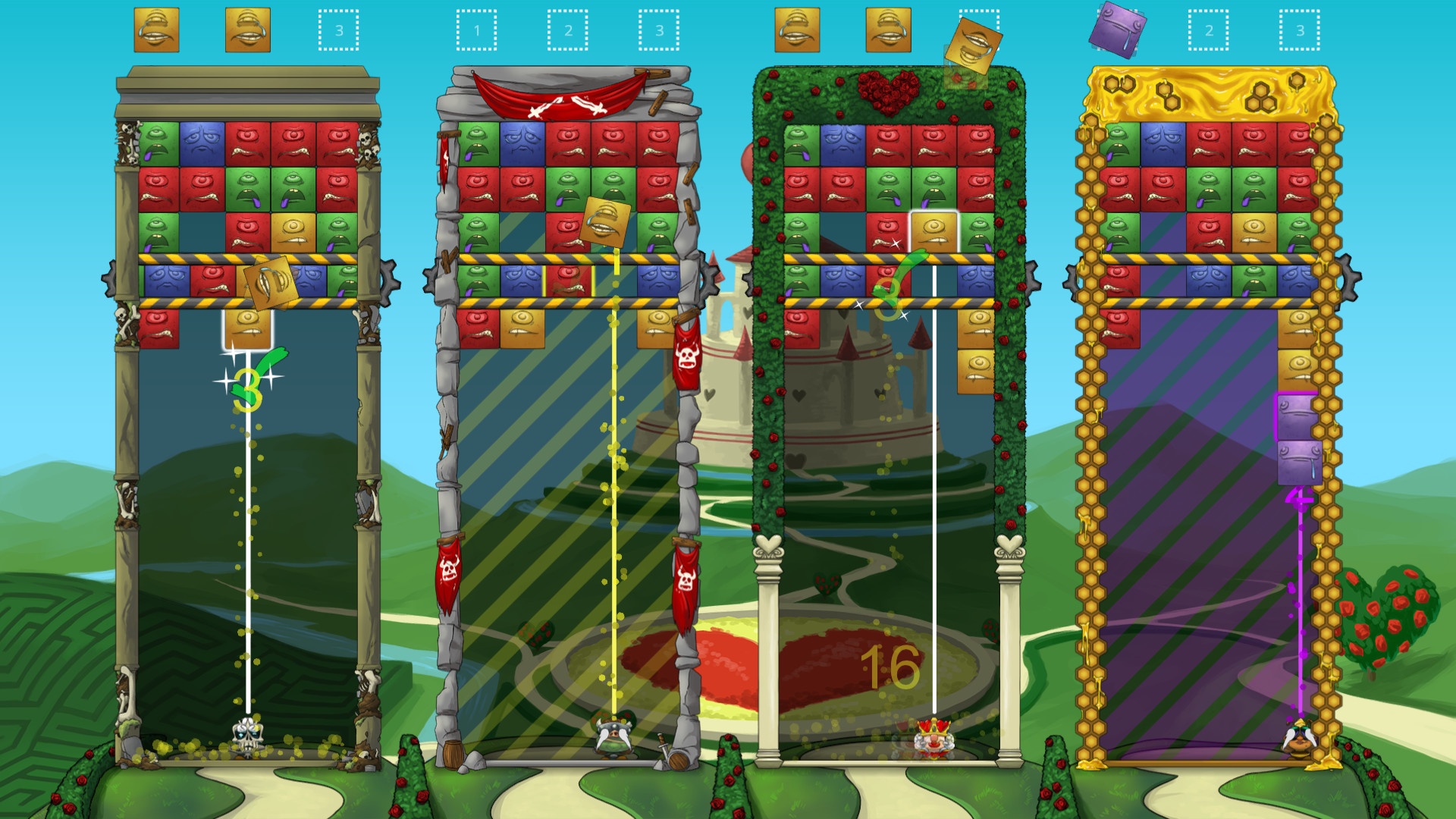 The single player mode is a fun little journey throughout the world and throughout time, putting you in different places to defeat the Tumblestones, find the Tumblecrown, play matchmaker as a sausage, and other things. The story is utterly bizarre but a cute vessel to propel you to different settings and ask you to keep shooting blocks. Tumblestone doesn’t want you to be the fastest, although it’s always a good thing to pick up the speed. The pieces are arranged so that you have to remove them in a certain order to achieve victory. If you accidentally have a crucial third red piece buried under two blues, tough luck, you need to start all the way from the beginning. This is what makes the traditional puzzle enthusiast sit up and take notice. Unlike other frantic puzzle games (Tetris, Puyo), there’s only going to be one clear path to victory, and figuring it out is key to not getting stuck on a level. The first couple of worlds allow for some easier setups (most you can do in under a minute), but you really need to slow down and analyze things once you get to world three. Thankfully, the puzzles for each world are static: if you’re determined to be the fastest, play through once and then go back and play again. You’ll find you can memorize a lot of familiar patterns pretty easily.

Once you really get into it, I highly encourage everyone to check out the multiplayer mode. Tumblestone’s approach is a little bizarre, as you need to have four players regardless, but you can set up two or even three computer people if you really can’t find others. The controls port well to the Joycon, so holding half a controller isn’t uncomfortable or ridiculous in comparison. The multiplayer gives everyone the same puzzle and tells you to go as fast as you can. This is where Tumblestone really shines. You don’t get to punish your friends by getting cheap combos first, you just have to figure out the puzzle and clear it. Once you lay down that final shot, the whole screen goes slow motion so everyone can gaze in horror and frustration as you pull off the winning move. It’s a surefire way to make people mad as hell at you, and I seriously enjoyed it. I’ve never been good at stacking up counters and such, so simply winning because I won is significantly more satisfying. 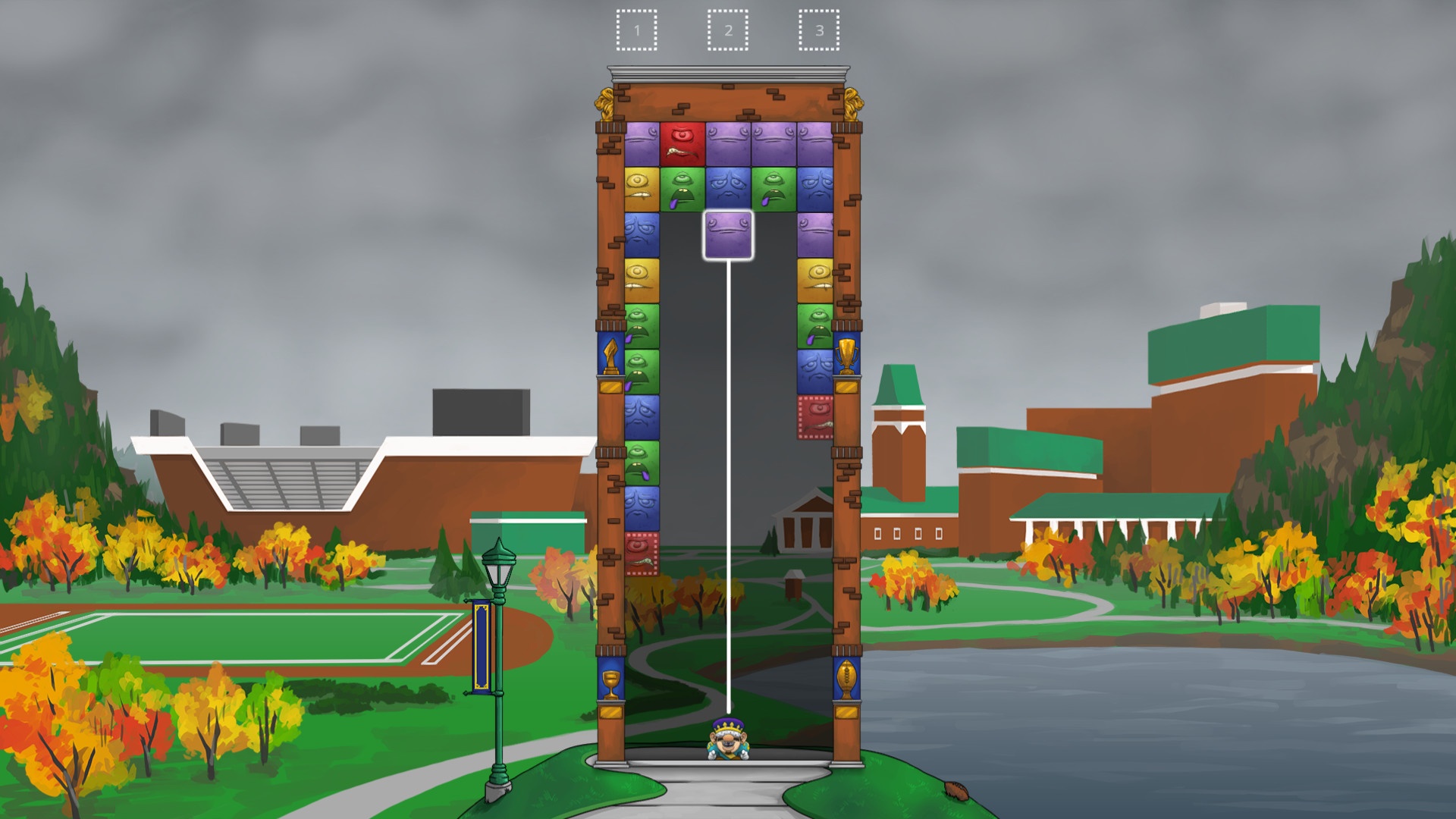 There aren’t any advantages to using any one character in Tumblestone, but there’s a good mix to choose from and everyone will find someone endearing. I mean, they’re almost all kings of some kind: Sausage King, Prom King, Rock King…but that makes sense since you’re trying to get this Tumblecrown in the first place. The different avatars are all stunted, squished looking people, but they’re cute in their own way. Kind of like the Tumblestones themselves. When I first saw them, I thought they were godawful ugly, but each one really grew on me. I especially like the purple, duck-billed block, which inexplicably reminds me of a platypus. Cute is not a thing that should be a game’s primary concern, but, especially with puzzle games, it’s a nice extra to focus on.

There’s not a lot to say about Tumblestone, despite there being a lot to play. You have a TON of worlds in the single player story, a few different arcade modes when you just want to smash blocks, and I feel the multiplayer execution makes it a phenomenal party game. The music is forgettable, but the characters aren’t, and I still remember some good times playing this on the PC. Since the exact same space is used for two or four players, it’s only natural to want to have some extra Joycons on hand for puzzle throwdown anywhere you go. I say keep the party going on the Switch, because there’ll always be room for additional, unique fun that allows a lot of people to be engaged with the Switch at the same time.