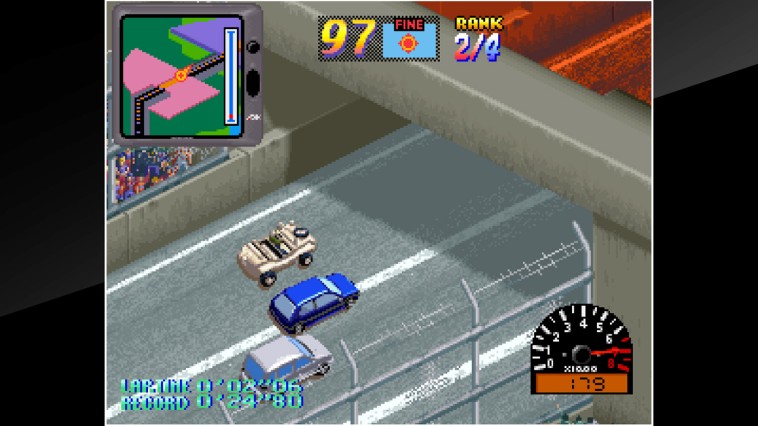 Sometimes I feel like games have missed opportunities in titles. For example, the recently released Butcher is spot on, because of the sheer amount of blood and mayhem you end up doling out. But other games, like Gone Home, might be better titled “Not Really A Ghost Story.” Or Golf Story could have been called “Striking People For Fun And Profit.” And here, with the NEO GEO classic Over Top, I think I would have called it “Hope You Like Drifting.”

Over Top is an arcade racer that takes place from the 3rd perspective and honestly has a lot of cool potential out the gate. First and foremost, it’s got a bitchin’ chippy soundtrack that reminded me a lot of the fun racers from the NES days, specifically RC PRO-AM. Everything is meant to feel very California cruising and upbeat, and I can dig that. There isn’t really a plot to speak of, because it’s a racing game with a huge variety of vehicles to choose from. Seriously, you can be in a convertible, a station wagon, some dude on a motorcycle, and several more. I was actually pretty stunned to have so many choices, and honestly got excited when I saw that each racer had proficiency on different terrain. Not only did this mean the racers were actually created with balance and future in mind, but that meant there was actually going to be variety in the terrain and not just blacktop as far as the eye could see. Exciting! 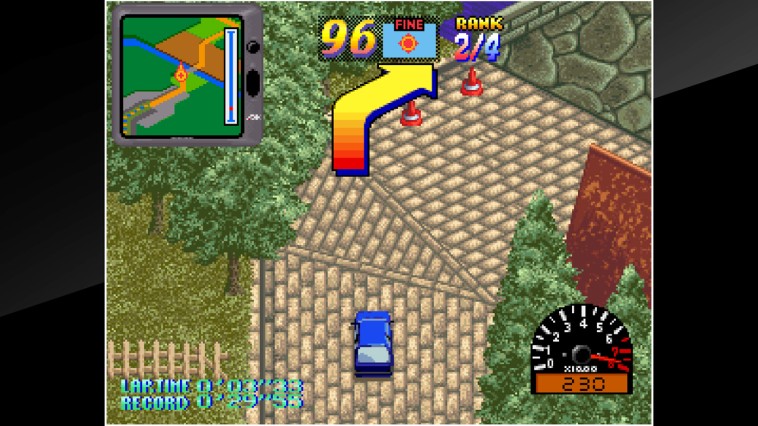 So I hopped into my cherry red sportscar and quickly eyed the flash NEO GEO tutorial that comes before each game. It’s been kind of amusing to realize that every NEO GEO game assumes it’s the first one you’ve ever played, so it gives you a fast rundown of what buttons to push that you can skip but maybe you should watch. There’s only two buttons to worry about: gas and brake. The brake can be double tapped to basically lean into a soft or hard drift, and I figured I would file that away under “if I need it.” After all, Mario Kart is infamous for its drifting (particularly in Double Dash), but you don’t really utilize it unless you plan to compete in upper CC courses or simply want to PUNISH your friends. Thanks, drifting, but that won’t be necessary.

The lights counted down and we gunned out the gate. I had driven maybe six seconds when the map in the upper left corner (helpful!) alerted me to a turn coming up. And by turn, I meant a hairpin, 90 degree change in the road. I thought it was exaggerating. I crashed in a wall. Really hard. Everyone immediately passed me. Getting back up, I floored it and tried my best to catch up with everyone (I had the fastest car, technically). Another turn, a slightly softer right. I leaned into it. I flipped my car on a barrier. Lap finished, I was in last.

Over Top will NOT let you win, or even do well, if you cannot figure out how to drift. Drifting is a relatively simple process, in theory, but you actually need to work the timing and amount of brake like a damn scientist. I’ve gotten used to modern racers (Project CARS, Gran Turismo) being demanding and disciplined with their racing technique, but I was fooled by Over Top. The graphics and design would lead you to believe this is from the 8 bit era with things more simple and forgiving, and that is far, far from the case. If you can’t figure out how to really work a brake and gas combination, you won’t make it. There aren’t clever weapons to help you out or random sharks that might bite your opponents. It’s you over road, dirt, mud and grass trying to win and occasionally getting passed by what looks like a Japanese box van. 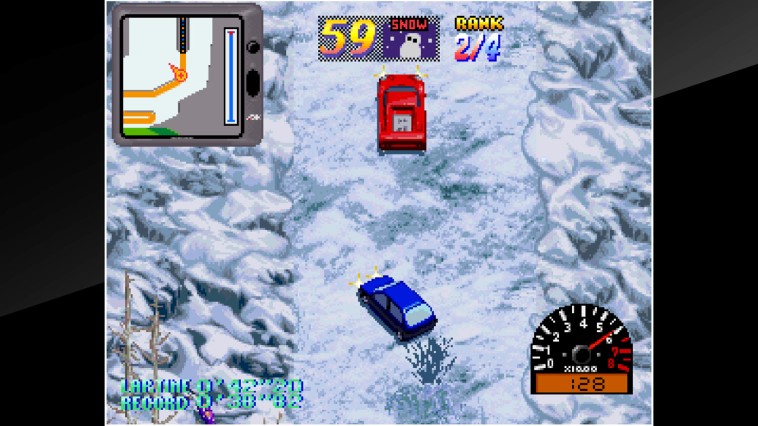 Once you get that and understand, Over Top has a lot of gaming to it. The different courses are varied and you learn to play to your strengths and weaknesses. The first couple of legs, for example, take place entirely on paved road with grass and dirt being the penalty areas to hit. But, once you cross into the second whole race, the terrain is mixed, and you figure out that a heavier vehicle might be best if you didn’t get enough of an advantage in the first part of the game. The other racers are tangible and, honestly, are strong. You might want to hop into the emulation setting and drop the difficulty at first, because these guys have no sympathy or patience and will simply destroy you. Best of all, you don’t just lose because your ranking is low on the first part: it adds up over time, so always lick your wounds and plan for tomorrow: there’s no stopping you if you’re tenacious enough.

I didn’t like Over Top because, frankly, I don’t like drifting, but I can respect the game as both a technical success and a pretty modern and mature take on racing. Despite some hokey graphics leading me to think this was easier, the courses are well made, there’s a lot of replay value and it’s totally worth multiplayer racing. I showed this to a friend who’s a big DiRT fan and he said it was “sick for it’s time,” which I take to mean as good. If you’re a race fan and you want something vintage on your Switch, I would say this is a solid piece of history to hang on your mantle. If you’re new, however, or rely on red shells to win your cups, maybe drift out of the way.