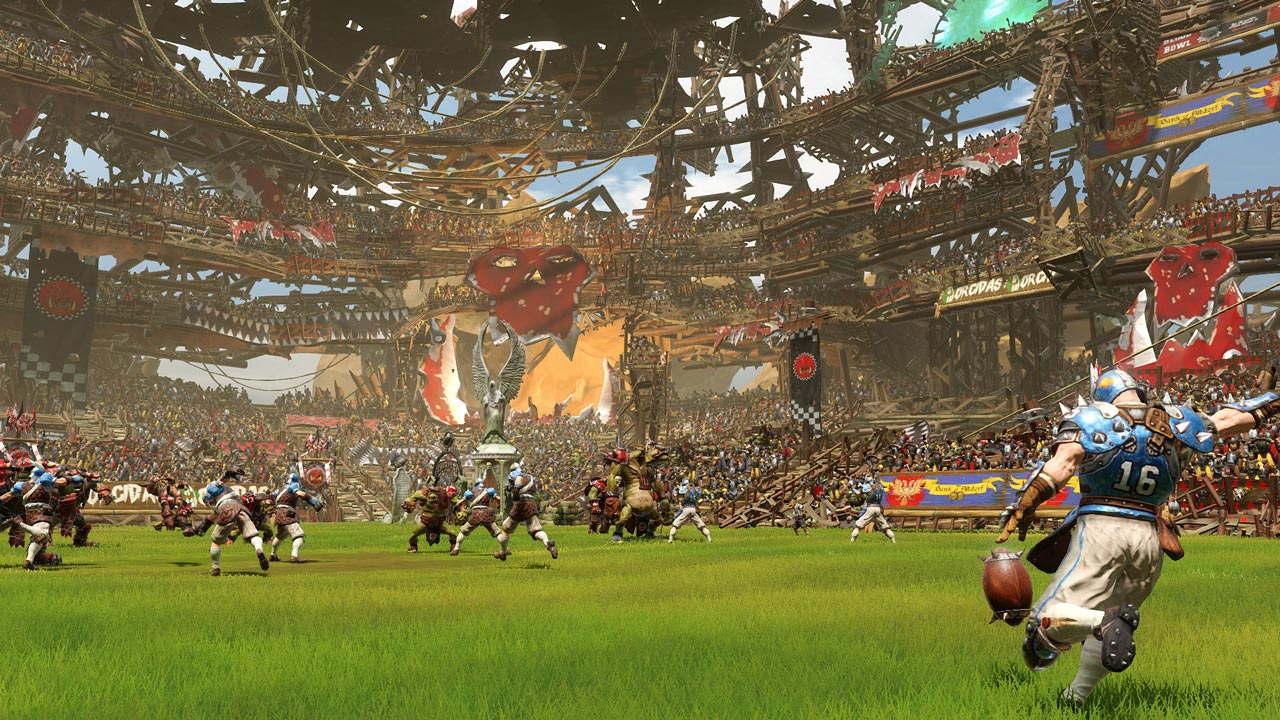 What is Blood Bowl 2: Legendary Edition? To put it simply it’s the definitive edition of the sequel to the video game adaption of the popular tabletop board game. OK, that wasn’t actually so simple, let’s try again. Blood Bowl was originally a tabletop board game about an ultra-violent form of American Football set in the fantasy world of Warhammer. Except in this version of the popular Games Workshop franchise the various races have given up murdering each other in large-scale wars and have instead taking up murdering each other on the sports field.

A typical match of Blood Bowl sees two teams each trying to run the ball into the opposition’s end zone to score a touchdown, with the team that scores the most touch downs over 16 turns winning the match. Aside from the expected actions like running and passing, players can also ‘block’ (i.e. attack) opposing players to knock them to the ground for a turn and create space– although they could also end up stunned, knocked out, injured or even killed. In fact the only action that’s frowned upon is attacking a player already lying on the ground which might result in a foul (if the referee sees it) and your player being sent off – although sometimes the opportunity to injure a key player is worth the punishment!

Of course veteran players will be well-versed in the rules already and are more interested to know what makes this edition of the game ‘legendary’. The key improvement is the vastly increased number of races. Blood Bowl 2 released with only eight playable races back in September 2015, which angered a lot of players as it was far fewer than were available in the first Blood Bowl. Eight additional races were later added as standalone DLC purchases but are all included here, along with eight brand new races taking the total up to a very impressive 24. The new additions all do genuinely feel unique as well – ogre teams are immensely powerful but slow and prone to ignoring commands, a similar affliction affects vampires who might start randomly feasting on team mates (or the crowd), the Kishev Circus can acrobatically jump over opponents while goblins can utilise sneaky contraptions and weapons. And there’s even the option to play as halflings (i.e. hobbits) if you really want a challenge. 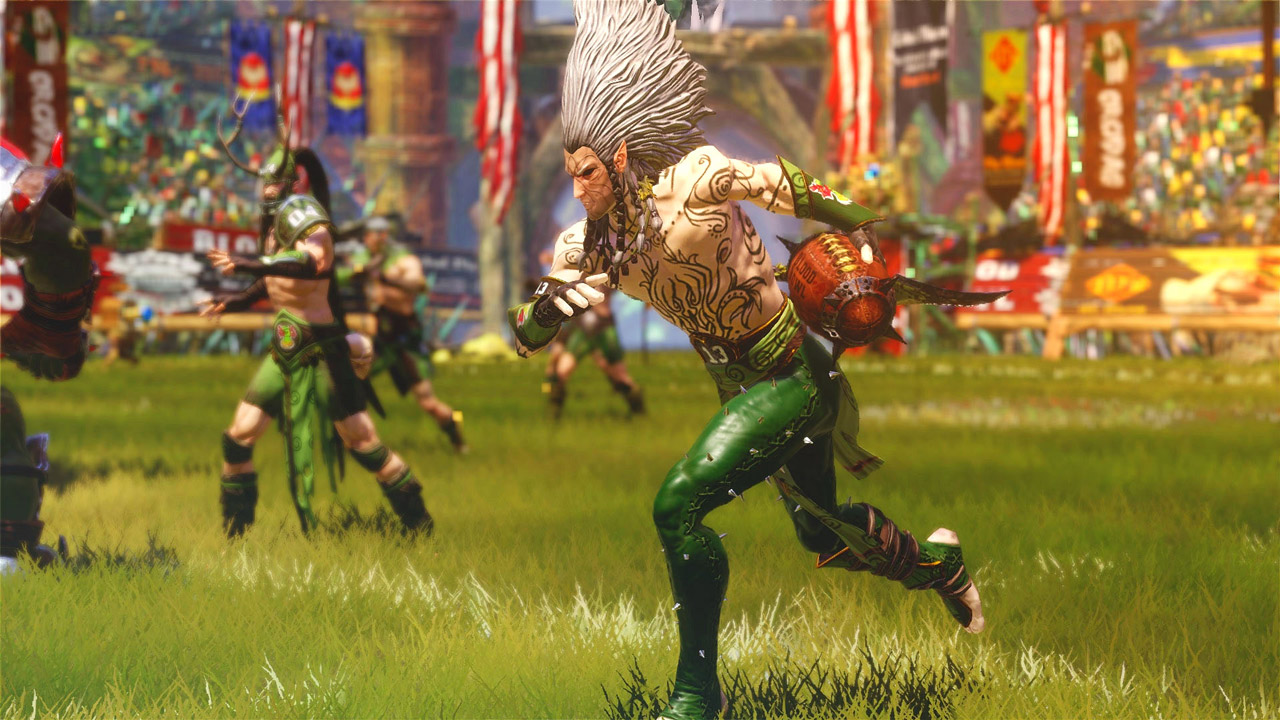 Elsewhere there are other new features such as greater customisability for teams and leagues – welcome improvements but did it really take two years to implement? An ‘eternal’ single player mode is another positive addition, but again its omission in the first place is puzzling. Rounding off the improvements is the option to play as mixed teams, all-star teams, a new stadium, new cheerleaders, a new camera mode and improved AI (although considering I hadn’t played the standard edition I can’t comment on whether the AI is actually any better). So for existing players it does represent a decent refinement, and it is possible to upgrade via an expansion pack rather than purchasing the full-price legendary edition.

But what about brand new players, is Blood Bowl 2 Legendary Edition any more enticing? Well, yes and no. By its nature it’s closer to a game of chess than a standard sports game, with time spent waiting for your opponent to take their turn (even the AI is frustratingly slow) and games typically lasting over half an hour. Just reading that last sentence has probably convinced many people it’s not for them. Even for those that are still interested, you’d better be prepared to have the outcome of many games decided by the luck of dice rolls. You can have a brilliant game plan and taken all possible steps to minimise risk, but if the luck goes against you there’s often nothing you can do. If you’re able to take this in your stride, laugh about it with your opponent and hope that it goes your way next time then you’ll enjoy yourself. If not just walk away now and save yourself from frustration.

The other problem for new players is learning the rules. Jumping straight into a match is likely to be a bewildering affair and you’ll take a hammering, without ever learning what you could have done better. There is a single-player campaign option that functions as an extended tutorial, but it has some major flaws. Early on many key features are disabled, but get activated along with new options in each successive match. The intention is clearly to ease players into it, but what actually happens is the early matches feel quite basic and it seems like you’re having to re-learn how to play each match with the new rules. You’re actually better off just reading all the rules online or from the menu option.

As an example, the campaign actually takes several matches to even introduce a key concept of Blood Bowl – the turnover. Essentially if anything ever goes ‘wrong’ on your own turn, then your turn is immediately over – even if you’ve yet to move or perform actions with most of your players. Attempt at a block (attack) goes wrong and your own player ends up lying bleeding on the ground? Turnover. Miss a pass? Turnover. Get tripped as you try to run past an opponent? Turnover. Fail to even pick the ball up from off ground? You guessed it – turnover. It therefore becomes essential to perform all your safe movements and actions first and leave the riskier actions until last as an early turnover can be devastating. You can take steps to improve your odds with the risky actions, and a limited number of rerolls are available, but you’ll still be relying on good fortune a lot of the time. 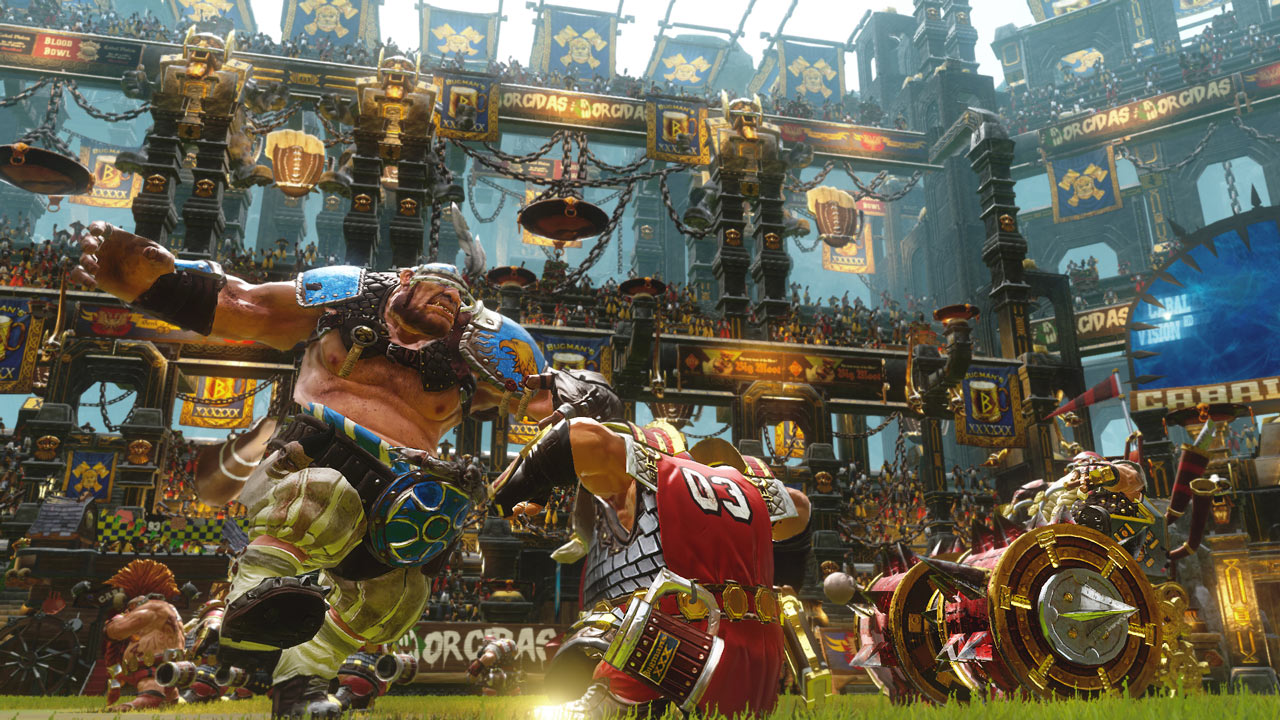 But if this all feels a bit negative I should point out that when it all comes together Blood Bowl 2 is pretty damn fun. The turn-based strategist in me enjoyed playing once I got the hang of it, I never got bored of watching the crunching attacks and the single-player campaign has an engaging storyline that lasts for several hours. Visually its adequate most of the time, but looks great in the infrequent close-ups. On the audio side I loved the zany commentary of Bob the Ogre and Jim the Vampire, but I imagine it will be divisive with just as many people hating them.

With a respectable amount of single-player content all those varied races to get to grips with Blood Bowl 2: Legendary Edition represents good value, but although the AI can put up a respectable challenge it can’t compare to playing against a human opponent. Venturing online I found plenty of possible opponents, although unfortunately they were all clearly far more skilled than me. Still, there are some dedicated leagues available with (generally) welcoming communities but I’d strongly recommend trying to find some other new players to pit yourself against.

For turn-based fans with the right mindset there’s a lot to like here, if you can overlook the various issues and quirks. Just don’t go expecting an action-packed game, or even one that’s particularly fair! Existing players meanwhile will have fun getting to grips with all the new races and will begrudgingly welcome the long-overdue improvements.