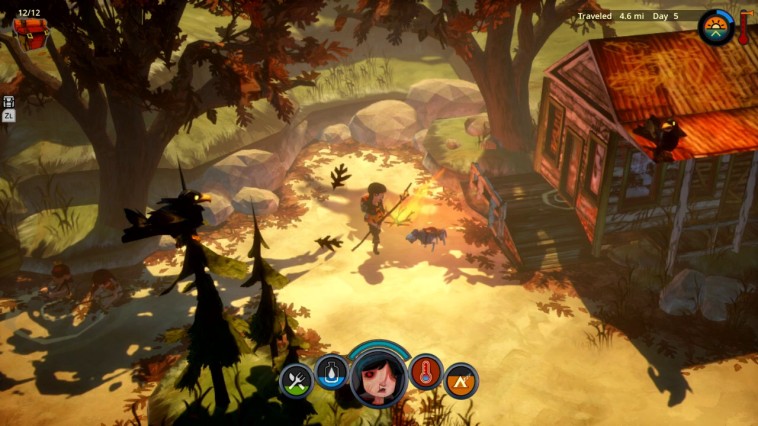 Survival is a thing that’s become pretty important and popular in gaming in recent years. Helping to blur the line between “entertainment” and “chore,” someone decided that it was important that characters always need food, water, shelter and otherwise in order to help properly capture the experience. It’s essentially helped to revitalize a genre that originally seemed to start and end with Oregon Trail, and a lot of people love it. But you always need a fresh take on a current idea in order to make it stand out. And one way to do that is to make the experience both authentic and awesome.

The Flame in the Flood is a roguelike survival game, which, thankfully, most are roguelike. I think it would defeat the purpose of “survival” if you went down the same path every time. Anyways, the world has suffered a devastating flood that’s turned most of the world (or at least most of this world) into islands and archipelagos. You, a girl named Scout who is very much alone, find a dog named Aesop, which apparently inspires you to venture forward and see if you can find civilization in some form again. Armed with a radio, your limited knapsack and a rather handy MacGyver instinct, you and the dog head out down the river, and whatever happens next is totally up to you, nature, and the cruel, cruel RNG.

Right off the bat, Flame in the Flood stands out more for me on aesthetics than anything else. I’ve got nothing against how other games take on the appearance of their titles (Don’t Starve, in particular, has a brilliant art style), but the way Scout and the world around her appear is really pleasing to the eye and to the mind. It’s got a slightly geometric feel to it without going fully unrealistic. It’s somewhere between Coraline and Frankenweenie, if that makes any sense. There’s a slightly disproportionate feeling to all the animals, humans and otherwise that you encounter that make them seem almost grotesquely comical. We know that suffering a massive catastrophe can change the world, and that’s the impression that I get from how Flame in the Flood appears. Like the waters came in so hard that it warped the very perception of how the world should be. Abandoned car husks, graffitied signs that mark hick territory, and creepy but usually safe winnebagos are the artistic dots on the landscape that really lets you know the where, when and how of what’s happening. 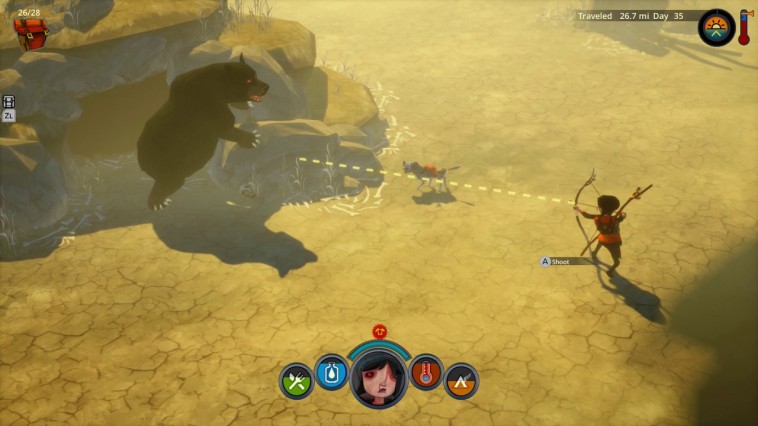 The three most important elements to any good survival game of this caliber are crafting, maintenance and encounters. Crafting is handled well, but you’re going to find yourself feeling very limited most of the time. To keep with some of the realism that you’d imagine, Scout’s bag is pretty small at first, with a limit of 12 crafted items that she can keep on hand at once. When you’re trying to juggle snares, knives, fire, rope, food and god knows what else, you suddenly find yourself maxed out and have no room for this awesome extra jar of water you just found. This is something that can gradually get better (and definitely does), but the initial hardship of making sacrifices on what you can and cannot bring is pretty rough at first, especially if you’re not familiar with what Scout needs to survive.

Maintenance, or keeping your character alive, is fair but tough in Flame in the Flood. Scout needs food, water and sleep, like all people, but she also needs to keep an eye on her health. Finding poisonous berries is almost a surefire way to die, and flash rainstorms will chill you to the bone, slowly giving you hypothermia. Most conditions are curable (and quite a few preventable), but that’s where the rougelike element really comes out to play. You don’t want to be drifting aimlessly along, and suddenly you hear approaching wolves/yokels and realize you don’t have a decent weapon on you. You can jump onto your raft, but that’s another thing you gotta keep an eye on. Smash that into the rocks enough times and you’re done, either dead or stranded, and it’s your own take on which is worse.

Speaking of the wolves and yokels, the encounters of Flame in the Flood are the final and important note to touch upon. My style is always “if you can get there, get it.” That is to say, you’ll want to explore as much as possible as you head downstream towards whatever may await you. In the dozens of islands that I landed upon, I’d say only about five were not worth the journey, but those were often SUPER not worth it (like, fire ants not worth it). Since this game takes place in fairly recent memory, it’s no surprise that, amongst cattails and saplings, you can find gasoline and schematics to upgrade your raft, plus some stylish clothing that can be both found and made. Most animals are either terrified of you (rabbits, yum!) or want your blood (no, boar, NO!). The campaign mode helps to regulate the encounters at least a bit, but, if you really want survival chaos, hit up the endless mode and see how crazy the game can get while you struggle to survive. 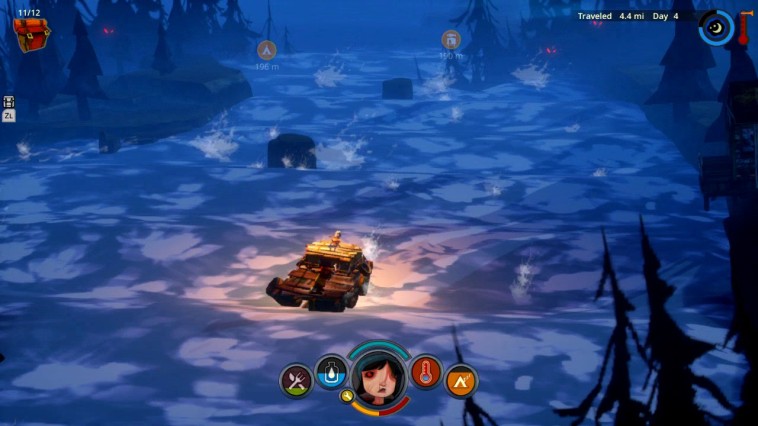 Oh, and make sure you have the sound on and up while playing Flame in the Food. The soundtrack is absolutely perfect, giving a modern “southern rock” feel to the twang of Deliverance meets America (the band, not the country). You feel at home with what’s happening, like you’ve been living in the wild for a while and now, finally, there’s a grim chance at something more than just living day to day. Plus, the soundscape of the game is incredibly well crafted: you can often hear approaching danger before it gets upon you. Don’t assume the twig snapping is ambience: something else is here, and they are most likely less-than-friendly.

I don’t really care for survival crafting games, I can’t even pretend that I do. As much as I like roguelike, my tastes are usually centered on twin stick goodness rather than hunting and gathering. But I can’t deny the impressive style and delivery that Flame in the Flood brings, especially to the Nintendo Switch. This is a long-term game that can be enjoyed in short-term spurts, making it perfect for home and away play. After you finish the campaign (which should take about ten hours, give or take), there’s a ton of replay value to see what could be different, and what else you can unlock. You’re not going to craft every single thing the first time you play, so going back and trying it another way is a great incentive. I always dreamt I would be set once I got a stove on my raft, and I wasn’t totally wrong. If you’re interested to take a trip downstream and see how you fair in the new world, and want a gorgeous vessel to take you there, there’s no time like the present to experience The Flame in the Flood.