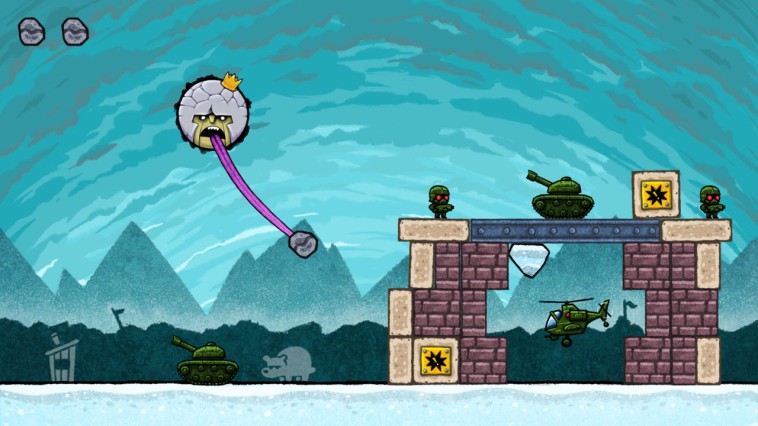 Mobile gaming is such a bizarre storefront. On the one hand, it’s helped developers and publishers who didn’t want to fight with big names on the console find their foothold and develop success. Rovio would never have gotten Peter Dinkledge to voice a giant bird if it wasn’t for iOS and Android offering a serious marketplace. On the other, it’s a huge mess of an arena, with thousands upon thousands of games never getting played by more than a handful of people, and the biggest names are now buying up attention in the form of franchises and ads dominating the front page.

King Oddball is a weird situation, because it’s a mobile game that’s also been ported to Steam, every console current and past and even Windows 8. I mean, you can buy the game on BigFish, so it’s not like this isn’t a title you can play elsewhere. Still, I’ve never played it, so I’m pleasantly surprised to find it on the Switch. There isn’t a story, as far as I can tell: you’re King Oddball, a giant rock with a face who swings rocks on his tongue. Humanity is gathering tanks, planes and other weaponry to fight you, but they seem to think that standing still while you hurl rocks at them is the best way to win. You generally get three rocks to throw, and physics, terrain and explosive crates all play important parts in your victory. Destroy all the opposing forces and win the level. 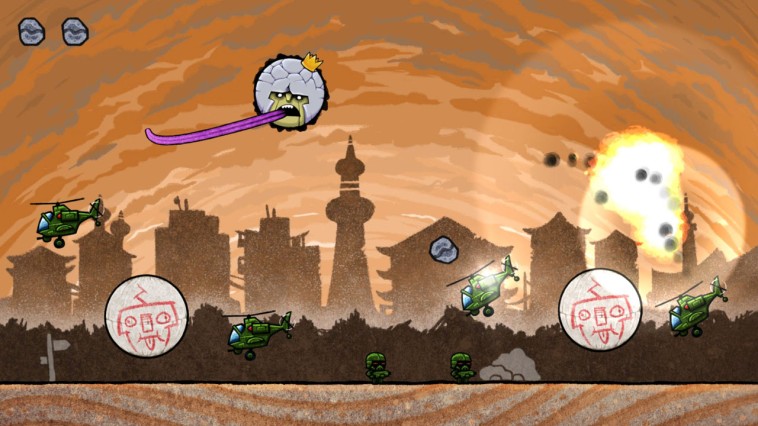 I talk a lot about developers needing to consider the Switch as being a unique situation: remembering that it’s a console that happens to go mobile and not, strictly speaking, a mobile device is what makes it work. King Oddball is a good gamble onto the Switch because there’s already been some success (in terms of sales and longevity) with it on other, non mobile consoles. But that’s not to say that 10tons hasn’t put some consideration in anyways, making sure to add touch screen controls for players who truly just want a buttonless interface. There’s no rumble to speak of, but not always adding new gimmicks is more than ok. Simply acknowledging that the touch screen might be important, or at least having it as an option, is something more developers should keep in mind.

In all truth, once you’ve played the first level of King Oddball, you’ve played them all, albeit with varying degrees of difficulty. It’s one button to worry about, as King swings at the same pendulum rate every stage and doesn’t deviate. I highly recommend trying out an online demo or at least watching a moment of gameplay, because this is truly an “in for a penny, in for a pound” situation. Having said that, I had a good time with the core mechanics. It took a bit for me to figure out the right times to release, but, once you get into a groove, you really understand the smooth nature and become a pro pretty fast. This is a game where you wanna play it at length in one sitting, because your muscle memories need a couple throws to warm up and remember the right timing for everything. It’s silly, but enjoyable in the same note.

Once you get the hang of things, there are achievements to unlock (four tanks with one rock, clear a level with one rock, hit yourself with one rock, etc.) and “diamond stages,” which allow you to replay old levels and try to beat them in limited throws. It’s some nice extras that show up and are totally optional, with the rest of the game unfolding regardless if you’re an ace at the core play or not. 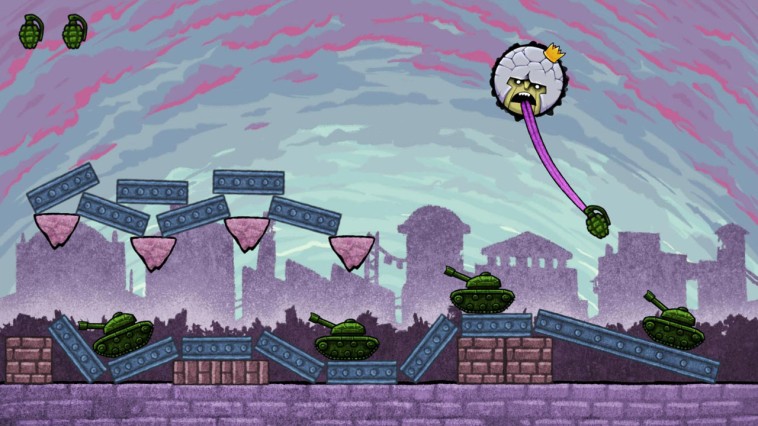 It might seem odd that King Oddball, a small title with a long life, would get pushed out in the same monolithic time as Mario Odyssey, but there’s a method to the madness. 10tons has put in a brand new Halloween mode, which is a secret area of creepy levels that unlocks pretty soon after you start the game. It’s actually a good set of challenging stages, and it’s around 30 or so courses, which isn’t a small amount. Add that to a bit of Halloween aesthetic change (Oddball has a pumpkin hat, the rocks turn into candies) and it’s a cute and seasonally relevant change that I’m honestly surprised is being pushed out. For a game that you could buy on your Windows 8 phone, having new content is a strong move on 10tons part, and seems to be a nice laurel branch being offered to Switch owners who otherwise might pass on this game.

All in all, this is a fun and curious edition to the Switch’s burgeoning lineup. In spite of some natural shortcomings (replay value is based on your own investment), King Oddball is a welcome addition to the NIntendo family. I’m surprised it never showed up on the 3DS or WiiU, but, from what I’ve heard about old dev kits and Nintendo’s previous support, there may not have been enough of an investment to be had. Still, 10tons is deeply in love with the Nintendo Switch, and I want their titles to keep coming, even the strange little puzzlers. If you’re also hoping to have something fun and simple to actually occupy time, but still have limitations that won’t suck you in forever, it’s certainly good to be the King.