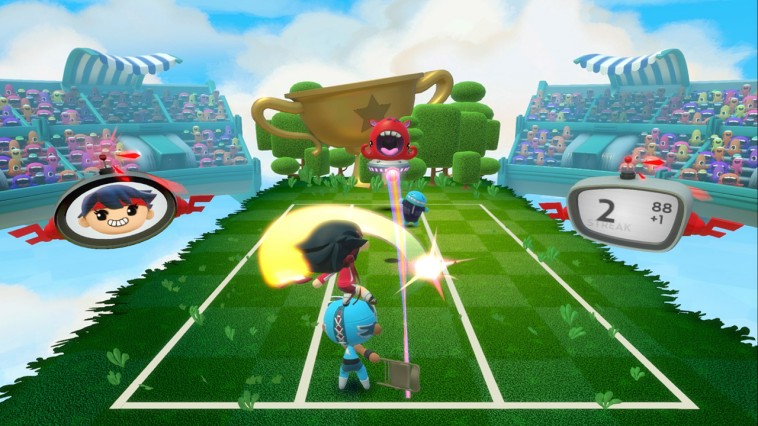 I honestly had never heard of Super Beat Sports when the title came across my Switch, and I figured I was going to be playing another silly little title a la Astro Bears Party. Nothing too engaging but fun, nonetheless. So when I saw Harmonix, the Boston-based musical developers, on the splash screen, my interest immediately perked up. Because if there’s one thing I love, it’s when developers take something they’re good at and try it in another direction. And Super Beat Sports was a wonderful surprise to come across.

You play a human who’s been sent into space to participate in a series of sporting events made by an alien race who loves music. They’re unable to separate their rhythms and beats from anything, so their interpretations of golf, baseball and other sports have been intermingled with a challenge of musical proportions. You, on the other hand, can’t bear to play a sport without wielding your trusty baseball bat, so it’s an awkward match made in heaven. The aliens, to their credit, don’t seem to mind you using the bat everywhere you go, which makes them some of the most accommodating hosts I’ve ever met. You try bringing a baseball bat to a game of Tag. People get MAD. 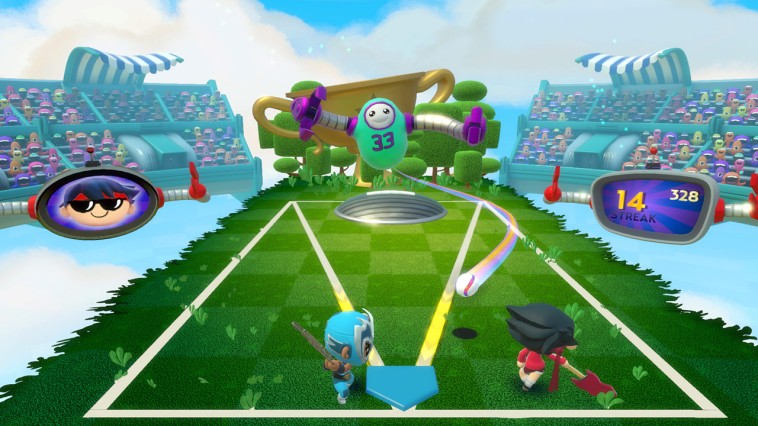 Far from being the complex type of game like Superbeat Xonic or other rhythm simulations, Super Beat Sports is a simple, follow-the-bouncing-ball type setup that often relies on just one button. There are, at the time, three main, single player sports and two co-op sports, though the latter can be played with a robot companion if you just want to improve your skill. The single player sports (which can have two players in some cases) are the core and soul of Super Beat Sports, and I’ll be talking mostly about them. The latter two don’t really unlock anything except for fun, and who wants that?

The first game, a baseball-return, is probably the most challenging and gets even harder on pro mode. This mode makes the most amount of sense based on the tool you start with, and, strangely, translated best to the gameplay style. Change lanes, time the pitches and hit back the balls in time. Three lanes means using the joystick to navigate as well as hit, though it isn’t too challenging until you get to pro mode. Beating a single stage with a high enough score means unlocking pro mode, where the game ups the tempo and also the number of balls to hit.
This same formula carries for the next two sports in Super Beat Sports, though in different capacity. Golf never really gets that hard, since it’s more about memorization and then hitting the balls in time with the beat you just heard. This is the easiest way, in my opinion, to rack up points if you’re looking to unlock things, and by things I mean “more bat variants.” You can switch between a cricket bat, a hockey stick, a garden gnome and so, so many more. I gotta give credit to Harmonix for creating just shy of sixty different tools to play with, because it creates a bunch of fun and giggly visuals that are simple but deeply appreciated.

The volleyball mode is, hands down, my favorite of the single player games (and yes, you can do this one as two players as well). Following the ball is much harder as it gets passed, lobbed and bumped back and forth across the net, and setting up the spike is INCREDIBLY satisfying. This one has a medium number of stages to play, but with pro mode there’s still plenty to do. I loved following along with the quirky and upbeat music, which never had words but was always something cute to listen to.

Oh, the cuteness. I need to point out that Super Beat Sports is ridiculously cute. It isn’t too over the top, we’re not talking tiny cats and dogs in sweaters with giant eyes, but this feels like an idea that someone’s five year old came up with and then a team of professionals brought it to life. The aliens are a little blobby but still have appendages and eyes and overall bright color schemes. Even though everyone is “competing” in the sport, there’s this sense that the real winners are whoever has the best time. It’s almost like being at a sports challenge in a kindergarten or something, but with actual skill and some seriously difficult moments of keeping time. Still, my kids love watching me play, and, yes, I always use the garden gnome. 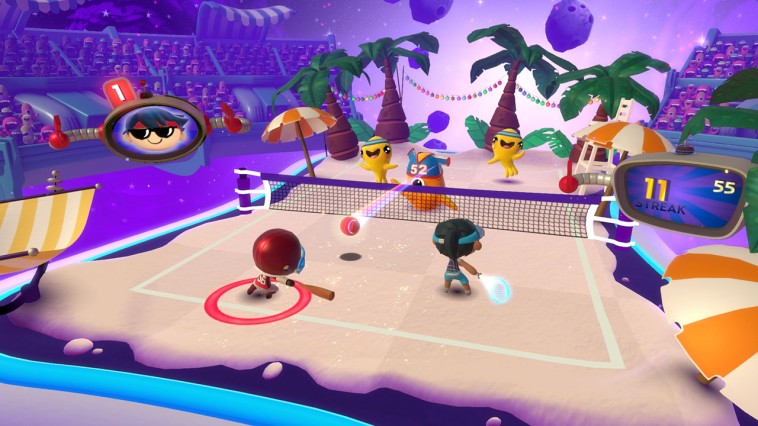 I guess Super Beat Sports does fall apart a little when it comes to the two competitive games. The first, which asks you to hit a ball back and forth from you to an alien to your opponent, is simply a contest of who can push the button fastest. The acceleration either comes on incredibly slowly, so it’s just who gets tired first, or ridiculously fast, so whoever messes up first. It keeps in rhythm but it feels like such a departure from the core three games that I immediately stopped liking it.

The second, a cool musical air hockey, actually has legs and can keep a player’s attention for a while if they don’t mind constantly trying to knock their friends out. As soon as you figure out how to get the timing down for a charged shot, that’s all you’ll ever want to do, and, again, you can’t unlock anything from it, so the novelty might wear off rather quickly. I think I’d like it better if there wasn’t an advantage by simply being more adept at following the beat. You might think that’d be obvious in a rhythm game, but I think I felt too relaxed in the “air hockey” setup and promptly forgot to keep time.

Super Beat Sports feels like an adorable homage to some of the better “simple” rhythm games, and I’d put it somewhere between Harmoknights and the earlier Rhythm Heaven games. It doesn’t have as much variety, but the number of stages per event, combined with the pro mode for each, has a lot of replay value for fans looking to 100% and unlock everything. I can easily see this staying on my Switch for the near future as a fun little game to grab 3-5 minutes here and there, and I really, really enjoy being able to swing a garden gnome. If you want to swing along to the tunes but don’t want to operate 35 buttons and a turntable in the process, Super Beat Sports is a solid and successful entry on the Switch.