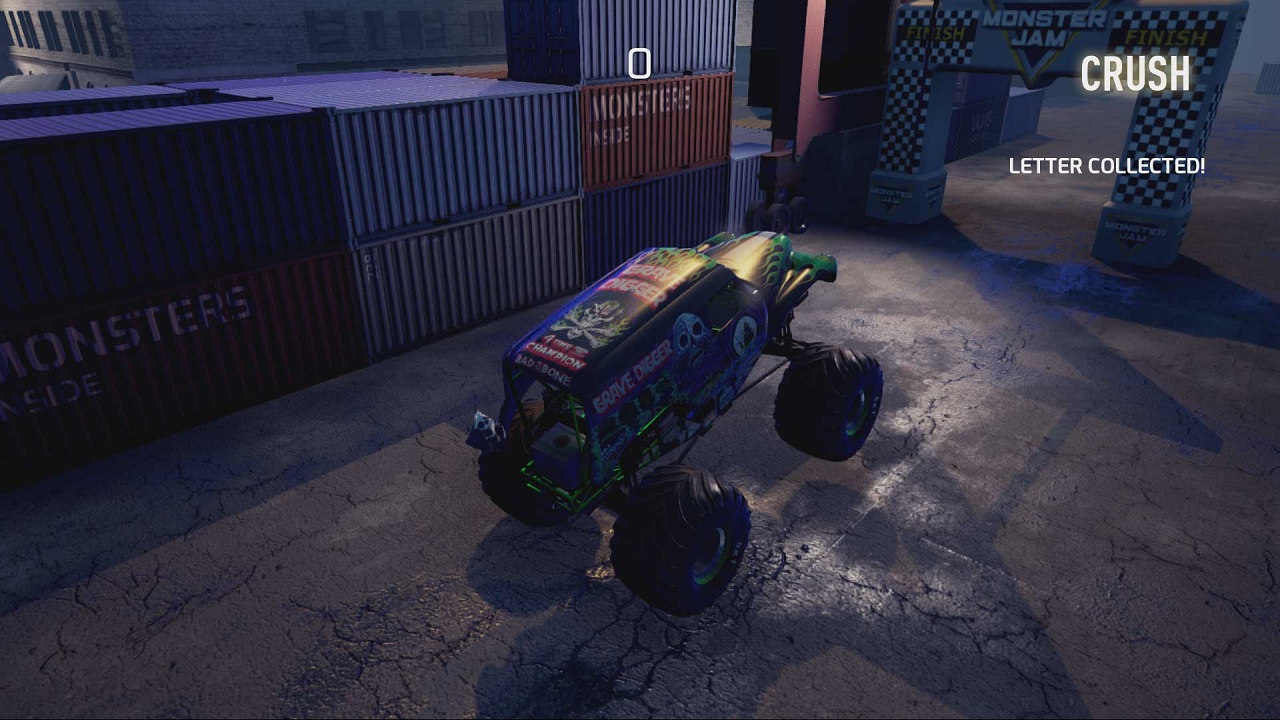 Have you ever watched a car crash in slow motion? I mean, not a terrible accident where people are thrown through windshields, but that moment when you realize that a car is definitely about to hit a pole/wall/inflatable gorilla and the driver either doesn’t notice or simply can’t stop. You’re a mere human being: you can’t stop this either. Part of you knows how obscene it is to watch and demands the more civilized part of you look away. But part of you is so fascinated by what is unfolding, this gorgeous ballet of tragedy and destruction, that you almost feel like you’re bearing witness to something glorious. For better or worse, that was my experience with Monster Jam: Crush It!

Monster Jam: Crush It! is already an amazing game because it has an exclamation point in the title, and because it let me know that monster trucks are still a thing. I remember seeing advertisements when I was a young lad in the 1990s, and couldn’t believe how awesome the concept of someone taking a truck, fitting the biggest tires possible on it, and then destroying everything they could in a passionate crushing madness. Sadly, I never got a chance to go and see an event live, but why bother when you have video games like these to carry you through the fantasy? With a variety of modes – race, freestyle, destruction and…outdoor racing – you might never need to actually leave your house again. At this point, I need to clarify the sarcasm, because I don’t want people getting excited about the review and then becoming confused when I complain about everything.

First and foremost, the graphics are honestly, truly terrible. It looks like they lifted sprites for monster trucks out a game made right at the beginning of the Playstation era, and then hermetically sealed them for freshness, only releasing them right as the game was being published. Every single truck looks weirdly low resolution and stretched out, and I assume the assets were lifted from some other game and just slapped into a Switch game without any insight as to how they might look. It’s weird, because, as a result, each vehicle looks out of place in the game itself. Monster Jam: Crush It! manages to alienate players right away by feeling like this is a monster truck mod for an existing racing game, but you quickly realize that can’t possibly be the case. 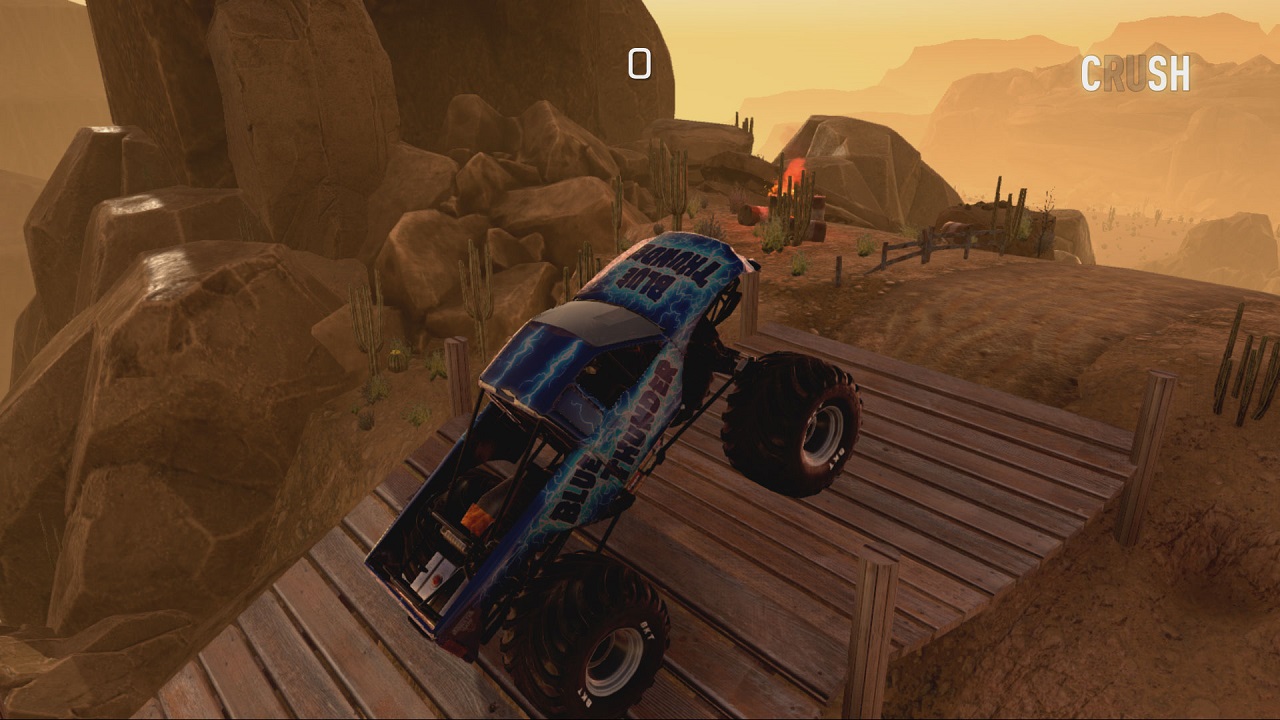 The races are laughably short, often concluding in 20 seconds or less. I was worried because, at first, you only have two trucks available and a surprisingly large array locked. Within about ten minutes, I had unlocked over half. This is because all you need to do is finish the races first against AI who can’t handle their trucks much better than you can. Tapping on the gas slingshots you forward like the whole rig runs on nitro alone, and you actually need to try really, really hard to flip over and stay that way. The races can be confusing since the finish gate doesn’t appear until you’re nearly there, and sometimes it literally just burst out of nowhere, a chest-busting alien that signifies the end of the race but not your suffering. To be honest, once you unlock Zombie you don’t need any other truck. It’s easily the fastest and it’s not like anyone knows who any of these trucks are (besides Grave Digger, who I clearly remember from Sunday morning commercials).

The outdoor races are a travesty of wasted time.Monster Jam: Crush It! wants to show you monster trucks in their natural habitat (a wooden glen, I guess) and how important it is to collect the letters CRUSH to get a top score. Which you don’t need to do. In fact, you don’t even need to steer. For every single outdoor race, I held the gas down and went in a straight line until I won. Easiest trucks I ever unlocked. I will never get those five minutes back of my life.

The freestyle events are also really weird because they suck up the most time. It said one minute when I started, but I’m pretty sure the clock kept resetting. I actually don’t know how easy it is to pop a wheelie and do a barrel roll in a monster truck, but the Nintendo Switch makes it crazy easy. Remember how I said that you had to try really hard to roll over and stay that way? This is the mode that confirmed it. I kept racking up “air time” points by slowly skidding on my roof, and then flipping over at the last second before I ran out of momentum. Top score, yay, I unlocked another truck. This is hogwash. 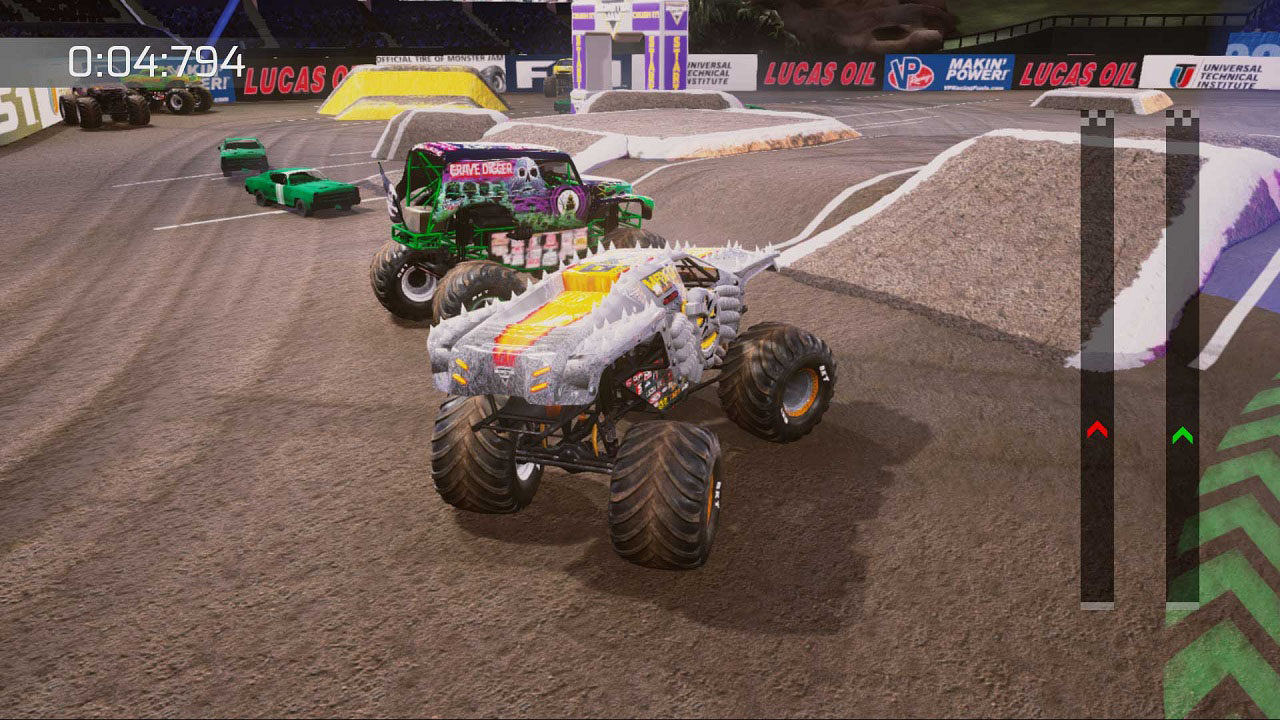 Lastly, destruction mode is the biggest letdown of anything in Monster Jam: Crush It! Monster trucks do one goddamn thing well: crush cars. It’s literally all they’re known for. So what the hell is a game doing with a destruction mode where you run over cars and literally nothing happens except you get points? And the freaking cars aren’t even in an accessible area. You have 20 seconds to navigate a mini obstacle course, find the cars, and then drive over them in a circle. For one stage I couldn’t figure out how to get around a rock wall, so I got stuck in the corner. In the process, I think I bumped a boulder and got 100 points. Unlocked a new truck. I felt dirty.

But the biggest complaint out of everything (oh yes, there’s more!) is the needy, relentless way Monster Jam: Crush It! attempts to justify its existence. The game dials home after every single race/jam/dance, and God help you if you’re playing in handheld mode. Nothing like being reminded every half minute that I’m not connected to the wifi and let’s try and find some wifi and hey do you have any wifi? I guess this is so I can submit my high scores to the online leaderboard to impress my friends, since this damn game doesn’t have any multiplayer. Yea, a game with plenty of competition against a braindead AI and I can’t even swap that out with my brain dead friends.

The final slap across your already agape mouth is the price tag. Normally, it shouldn’t matter: publishers can decide whatever they want and people are all willing to pay different amounts. But for a game that I completely, COMPLETELY finished in 30 minutes to cost forty dollars USD is almost as insane as the fact that I could have been watching Bojack Horseman for the last half hour and I was playing this instead. Had Monster Jam: Crush It! been some low tier indie game or even an entry level, twenty dollar fingerblast, I could have let it slide. But forty dollars is a week’s worth of groceries, a decent dinner date or at least a handful of already existing and much longer titles. This game should not exist. For the level of quality and amount of gameplay, this should come with an early access tag or at least an apology. I’m sorry if you love monster trucks, but Monster Jam: Crush It! is literally for no one. I can’t suggest even giving this to your worst enemies, because the beatings you’ll get in return aren’t worth it.