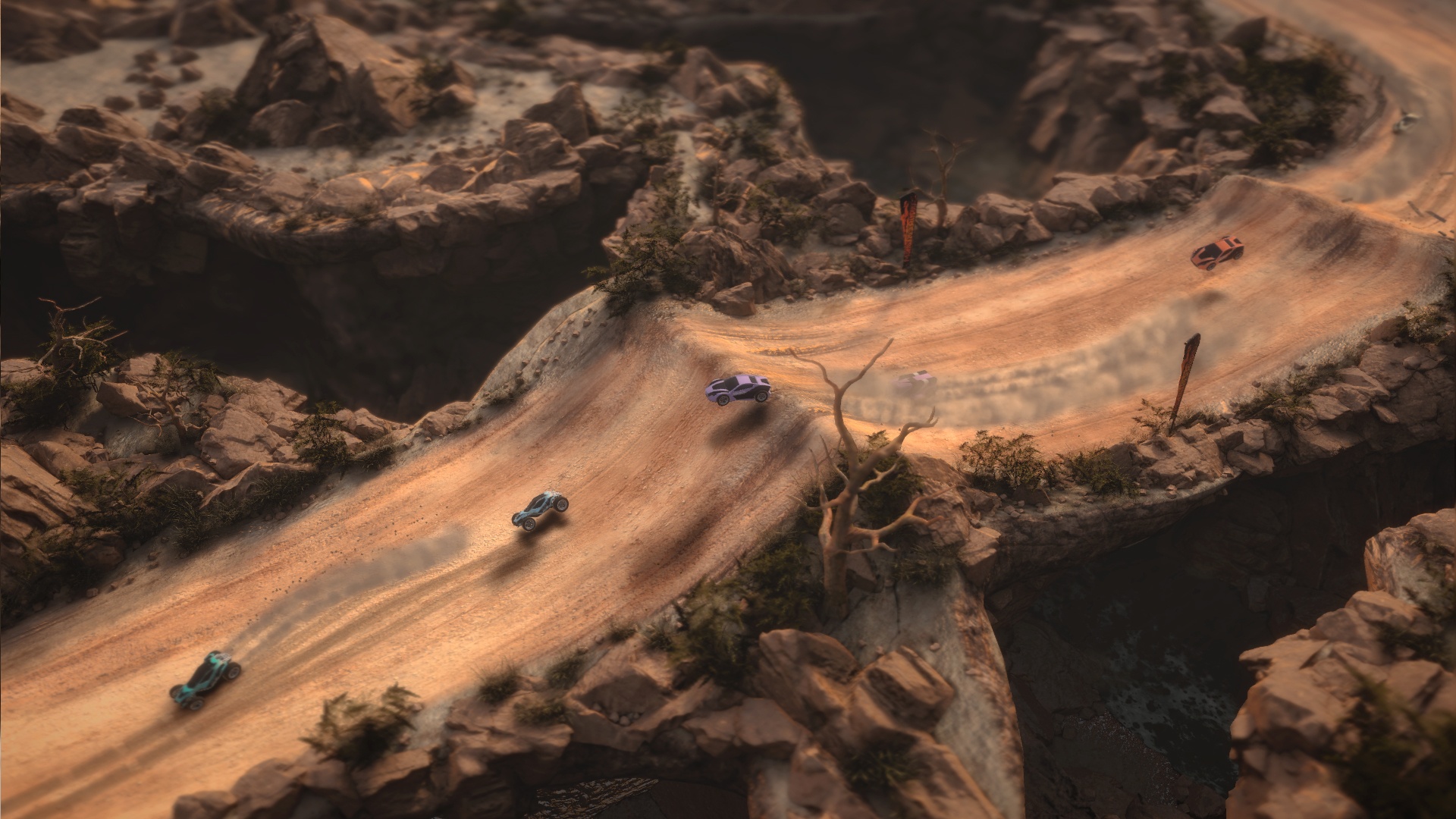 Did I miss a memo about racing games? Do people wait until they can all release their titles at the same time before actually publishing one to better confuse and dilute the pool? It felt like I went for months without seeing anyone wanting to go toe-to-toe with Mario Kart 8 Deluxe (with the exception of FAST), and now every Tom, Dick and Microids is getting their titles out. Probably a holiday related thing, or the fact that half the world is currently experiencing a cold-chill that makes wanting to go out driving a thing of the past. In any case, now we bring the heat in with a little title called Mantis Burn Racing.

Far from being anything overly complex or intricate, Mantis Burn Racing is a title that’s seriously focused on the “racing” aspect and very little else. I don’t want to say the game is simple or standard, but you’ll understand the purpose almost immediately. After a quick chat with a pit manager who’s name I don’t even remember, you’re thrown into your first race, which takes place in the form of various dune buggies. Is that also just a thing that I missed out on? When I was younger, racing games almost exclusively took place on some kind of fixed, professional track. Even Excitebike had visible fan bleachers. But Mantis Burn is much more organized than, say, Beach Buggy Racing, and I can honestly say it’s a ton more fun than Rock N’ Racing.

Let’s break this down. First and foremost, the camera angles and control over how you view your vehicle are exceptional. Most of the time you’re the perfect distance to be able to view where you are, what’s coming up and who’s coming up on you. There’s also a minimap in the corner that gives you a bit of warning, but the secret is to run a course a couple of times till you’ve memorized what you need to do in order to unlock all the achievements. The achievements come in the form of gears, and gears are needed to both level up and also to unlock the next season of your race career. You get three gears for winning the race, and three gears for accomplishing two additional feats. The feats are sometimes dirt simple (get amazing air) or surprisingly difficult (drift 1000m). In any case, you’ll be repeating most races in order to get all the achievements. 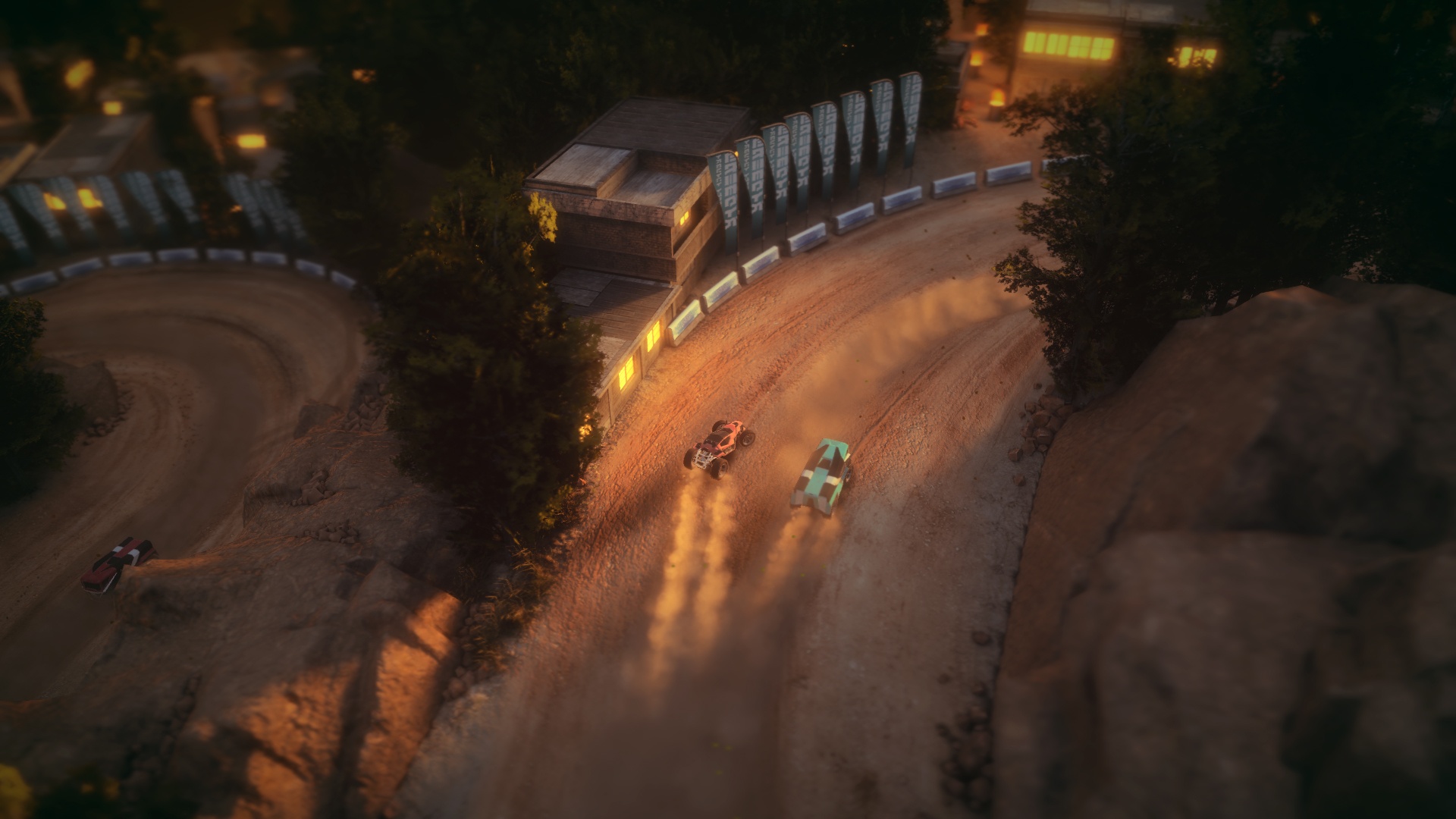 Why? Because the AI of Mantis Burn Racing is LEGIT. These racers aren’t the insane 200cc Waluigi’s of the world, but they’re here to win and they understand the cars a lot better than you. They drift and gain control on a dime. They know the secret shortcuts and aren’t afraid to use them (hint: learn from the AI). They also have boosters, same as you do (after you unlock them) and they actually use them at the PERFECT moments. Having said all this, they aren’t unbeatable. Drafting and using smart drifts are the perfect way to get and maintain your lead, and, as long as you don’t slam into too many walls, you can keep up a first place rank. But even the first race doesn’t take it easy on you, and you gotta learn on the fly because it doesn’t get easier. The AI might as well have as much stake in the game as other players (which, gotta say, the multiplayer racing is some of the better racing I’ve done with friends so far on the Switch).

After doing just a couple successful races in Mantis BurnsRacing, you’ll be able to start tweaking your car, but the tweaks are never super drastic. You can add or remove three upgrades to your vehicle, in the form of better top speeds, boosters, better tires and relatively generic upgrades. Unlocking different vehicles takes the form of leveling up and having enough cash, which cash is NEVER an issue. The only way you’ll unlock a car and not be able to afford it is if you’ve miraculously blown through every race but somehow done it in a milquetoast sort of way. That is, you never got air, you never drifted, never even passed another player. It’s impossible, so don’t even posit the idea. You’ll be able to afford that new tank disguised as a car.

And the types of races are actually a fun and interesting mix. Far from just “be first,” there are things like point challenges, where the first to 10,000 points wins (first place each lap gets more points). Or elimination rounds, where the last place dude is taken out each lap till one remains. And, naturally, there are time attacks to try and achieve the perfect runs to outpace the racers who came before you. These are all examples of allowing the core mechanic to thrive (be a good racer) but still adding some flair to it. Far from the Mario Kart route where a Blue Shell trumps any sort of skill, Mantis Burn Racing wants players to know they can be down without being out, especially with a little creative driving. 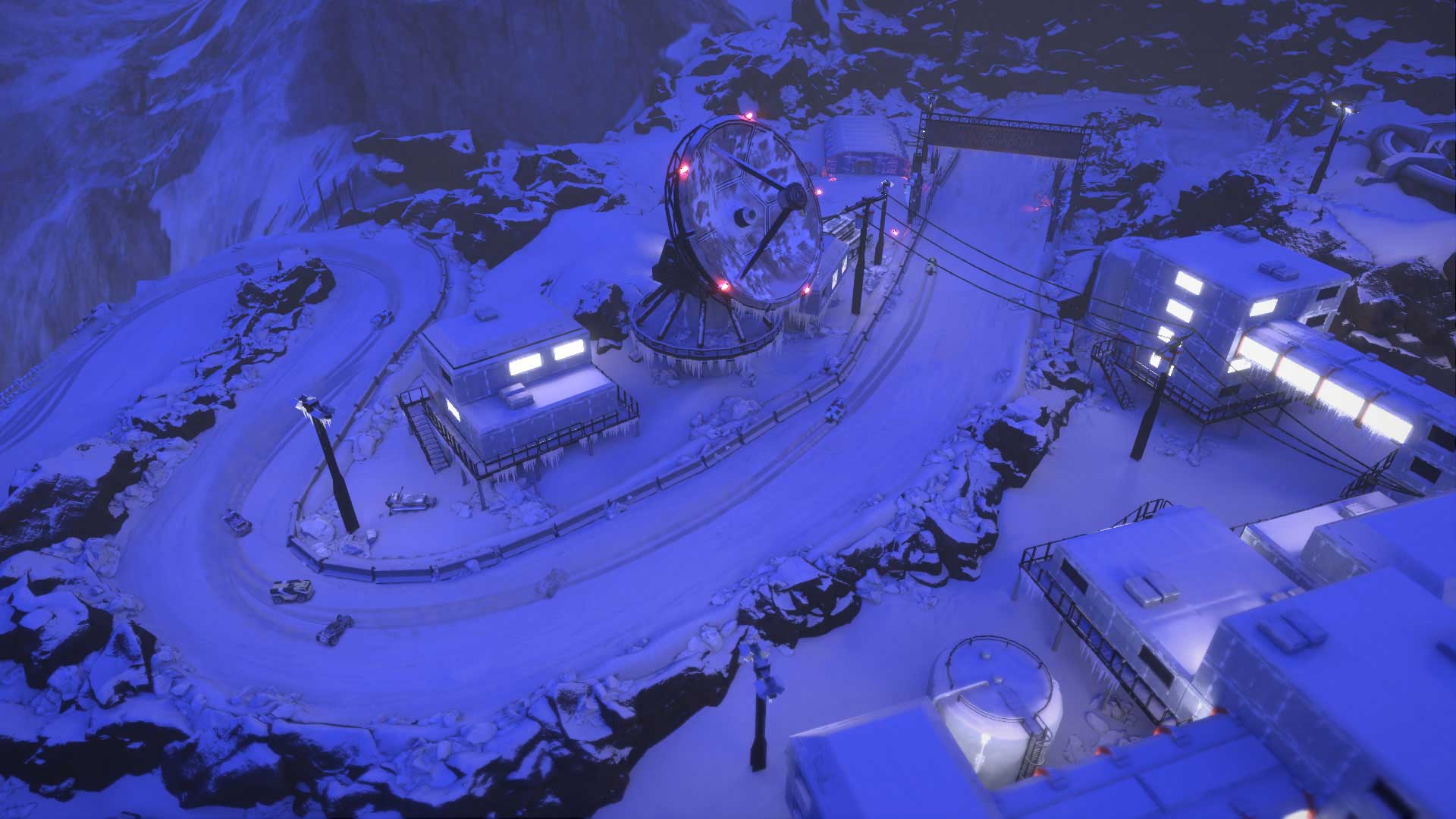 Should you grow tired of racing alone, you can hop online to compete with other Mantis Burns fans, and, good news, cross play is baked in. From PC to XBox, Mantis Burn Racing does have a decent install rate in a global sense, so you should be able to find someone to take to the streets with at any time. Barring the online play, you can also do wireless local or simply couch local to leave your friends in the dust. And if you want to go online but are scared that the long term players are going to beat you badly, it’s ok, you can turn off cross play until you’re ready. That’s a level of support that I really appreciate from the VooFoo team, and I hope that the lobbies are constantly full after this.

Combined with a thumping soundtrack and quite a few seasons of racing, Mantis Burn Racing has some serious longterm investment for fans looking for a great racer at a lower price. You’ll easily get hooked on the speed and style, and mastering the perfect long drift and finding out destruction points keeps you invested. I recommend this game for anyone who enjoyed racing on any platform.

Combined with a thumping soundtrack and quite a few seasons of racing, Mantis Burn Racing has some serious longterm investment for fans looking for a great racer at a lower price.