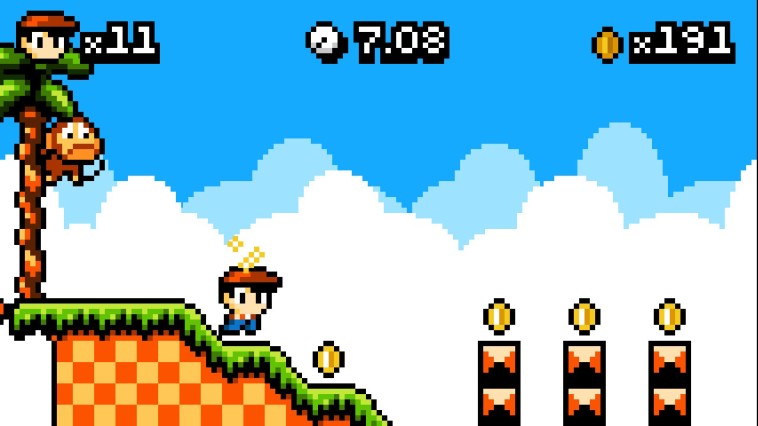 Kid Tripp is a silly little platform runner that comes to us from mobile and Nintendo dev veterans, Four Horses Ltd. In this game, you play the titular Kid Tripp, who has crashed into a giraffe and now upset all manner of wildlife. If this doesn’t make a lick of sense, good, you’re on the same page I am. I guess having some kind of premise for a nonstop runner is something important, because any sort of effort is a good thing. I use the phrase “nonstop” instead of endless because this game certainly has a finite point, especially as it’s divided into levels rather than just “high score” time attack.

Let’s break it down. You, Kid, have two basic functions: jump and shoot. Since you can’t control your running through conventional means, you can sometimes force yourself to stop with well placed blockades that the stage provides. Jumping has varying degrees of sensitivity, so you’re able to time a short hop or a more definite jump. This is a mechanic that’s both absolutely necessary to make the stages work and is also incredibly frustrating. Holding down the button for even a split second too long changes nailing the platform/enemy and falling into the abyss. New players are going to feel very, very frustrated in the first couple of levels as they get the hang of trying to get Kid’s timing perfect. 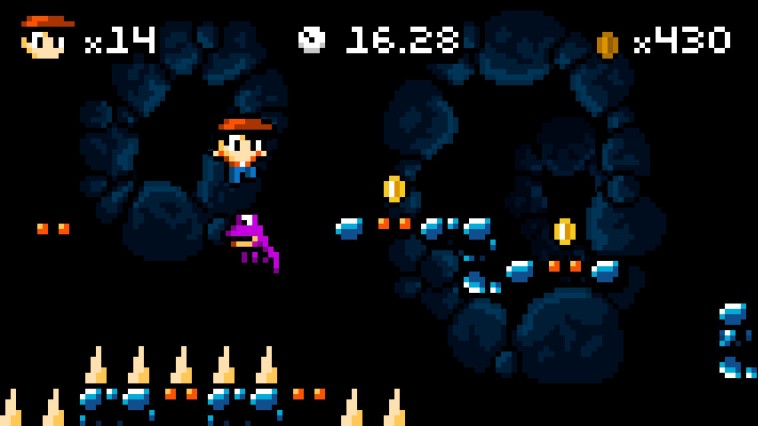 The shooting initially appears novel and overpowered, but you quickly learn how important it is to, once again, time things perfectly. An unlimited number of projectiles that one-hit-kill every enemy you encounter sounds awesome, but some of those enemies are important platforms to reach bold new heights. This is something that you’ll only fully realize through trial and error, and that is where the replay value of Kid Tripp comes in. You think you can just mash the button like crazy and make a wave of bullets to stop everything in your path, but the errant bird or snake might be the bounce pad you needed to reach the next platform. Even worse, sometimes too many bullets clogs up the screen and causes you to miss the equally dangerous coconut that’s been hurled at you by a monkey. There’s, oddly, a lot of strategy that needs to be honed to really get into the stronger play style of Kid Tripp.

Once you’ve mastered these two ideas, the rest of the game just unfolds in front of you. There’s a bit of variety in terms of backgrounds and which enemies appear, but there isn’t exactly a dynamic shift after a certain point. As much as it’s important to appreciate what the game does best, what you see is what you get in the first few levels. If you don’t like the way Kid Tripp handles or were hoping for something more, you’re basically out of luck. Kid Tripp has two objectives: be fast and be accurate. There’s a gold medal time for each level that you strive to achieve, and you do this by making sure you never, ever stop. So timing out the jumps (again, trial and error) and knowing where the enemies are to keep your flow uninterrupted and your hops dead on. Even then, you need to still see a few runs before you really hit that golden ratio of where to land, when to be airborne and how important those coins are. The coins, as far as anyone can see, are superficial and meant to help boost your score, but you aren’t unlocking new weapons or outfits or whatever. They’re just shiny objects to distract you. In a way, Kid Tripp teaches us about the dangers of keeping your eye on a prize you don’t fully understand. Ok, not really, but that’s still a fun motif to slap on at the end. 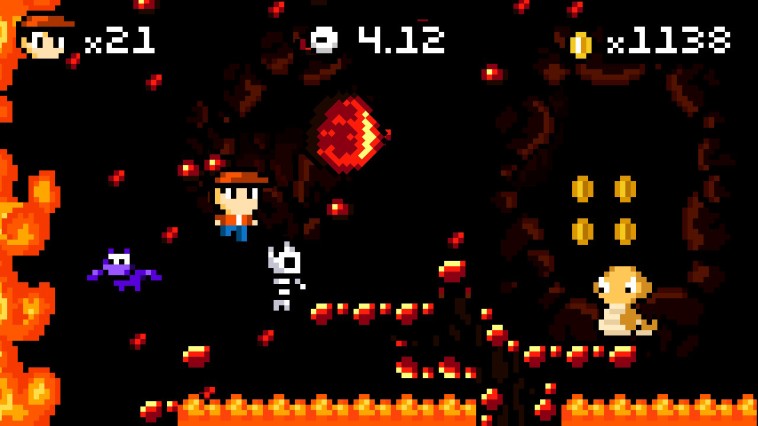 Graphically, Kid Tripp does a decent job of capturing some modern retro pixel settings. It’s easy to imagine the snakes and bats popping up in a Gameboy Color title, and Tripp himself is a feisty but slightly bland hero. Moving from the islands above to the dungeons below, there’s clearly a lot of inspiration by other great platform games, but Kid Tripp does its best to set itself apart and be something original, or at least interesting. There isn’t anything here I would hang on the wall as art, but I can still admire the effect nonetheless.

When all’s said and done, Kid Tripp is just another step for this mobile-turned-console game series. I played it some years ago on my phone, and I don’t see a ton of difference there versus here on the Switch. Sure, the graphics are a bit better in terms of being on the big screen: nothing is stretched out or wonky as a result. And obviously the button control is much better than the virtual buttons that the iPhone provided. But there isn’t necessarily “more,” and it’s hard to argue getting a mobile game on a fully-mobile device instead of getting it on a sometimes-mobile console. Still, it’s a nice way to spend the afternoon, and perfectionists would have fun trying to nail those achievement times. With a shifting run speed in the settings, anyone can jump into the party and give it a whirl. Kid Tripp is pretty damn decent, and I wouldn’t mind getting a gift code for it in my stocking.