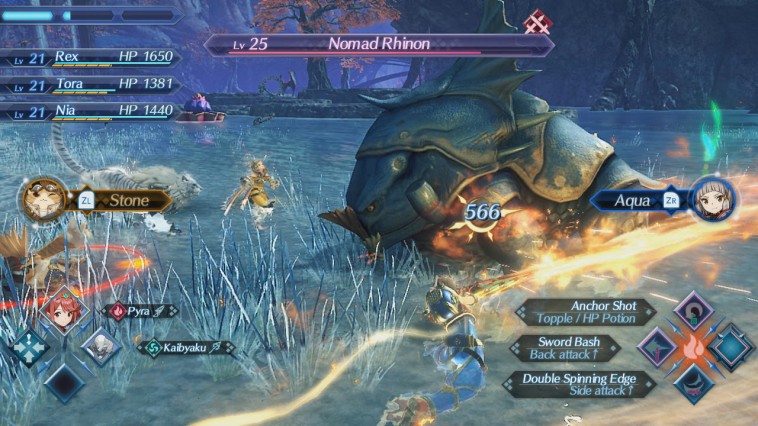 Not every quest will begin in the hearts of a castle, the wilds of a forgotten hamlet, or in the sewers deep beneath a corrupt land. In fact, the land is one thing we, as people, take for granted, with every step that we take, every trod, every skip. For a world that’s over 70% covered in water, humanity looks out towards the horizon and never imagines, for a moment, that we may reach the edge of the world and have nowhere left to run, to walk, to feel the grass beneath our toes. That could all change in a heartbeat, and never once do we question “What will become of us when the land is gone?” Thankfully, this is not the precursor to Waterworld: the game. This, dear JRPG enthusiasts, is how we look towards the new Nintendo epic, Xenoblade Chronicles 2.

If you’re also someone who’s avoided the franchise just by happenstance and the fact that there are a ton of JRPGs available each year, you might be surprised to find out that, much like Dragon Quest and Final Fantasy, there is no canonical, chronological link between Chronicles 1 and 2, and not even the same setting or characters whatsoever. This is a standalone tale that shares only the title and the implicit nature of that suffix Xeno to really make any connection: there are alien ideas and people afoot, and you constantly feel like a stranger in a strange land, no matter how long you play. Our protagonist, Rex, is a Salvager, which means he gets his income through plumbing the depths of the cloud ocean to find treasure and scrap for sale. You see, Rex’s world is rapidly running out of land, with more and more of it disappearing beneath the waves every day. Most people live on the backs of Titans: massive beasts whose backs provide space for people to build shacks, houses, even entire towns and cities. Every year, more Titans die, and land disappears with them, leaving the various animals and humanoid races to either flee or drown. Giant airships connected to flying Titans serve some respite, but there’s a constant sense of impending doom: how long can we avoid disaster? When will the last Titan leave us and take what little safety we had left?

For the true believers, there’s always the idea of Elysium: the land atop the World Tree, far up in the heavens, where people once lived and may one day return. For some, it’s a fairy tale to inspire hope and create false belief, potentially bilking the faithful out of money and time. To others, it’s a very real possibility, and they will do anything to either achieve ascension or stop it at all costs. Whoever would want to prevent the salvation of an entire world? Well, the answer is convoluted, shrouded in secrecy, and will take Rex on an amazing adventure across the entire planet, as he becomes more than a simple Salvager, and, instead, evolves into a Driver: one whose spirit and soul are pure enough to fuse with a legendary weapon, the Aegis, and command the power that was sealed away long, long ago. Aided by his only guardian, a Titan lovingly called “Gramps,” and a motley cast of dreamy eyed adventurers and cynical supporters, Rex’s quest will take him from the land above the clouds to deep beneath the ocean, and far beyond his wildest expectations. 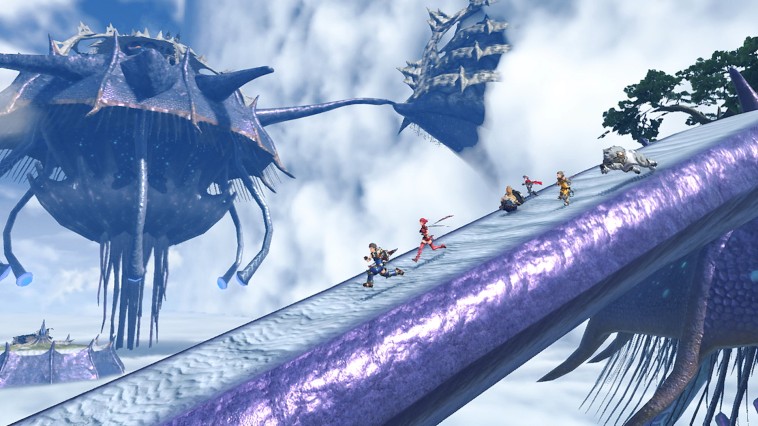 As you may have guessed from the fact that I needed two paragraphs to intro to my review, Xenoblade Chronicles 2 is long: like, easily one of the longest JRPGs I’ve ever played. I’ve clocked about 65 hours, didn’t really take too much time to do side quests (more on that in a moment), and really tried to push myself along so that I could get to the end and properly drink in what the game was about. The whole storyline and the expanse felt like it just could not be contained. In many ways, I compare it to the Legend of Heroes series, in that this is a game where you clear everything else off your schedule. If you lose momentum or try to play something else, you could easily forget where you were going or what you needed to do next. This comes not only from the long storyline in general, but also from the sheer amount of extra things that the game attempts to task you to do whenever you’re not looking. You will literally play for about ten hours and still feel like you’re in the tutorial, as the game keeps springing new and more involved mechanics on you that you didn’t know you could do. Building relationships with your Blade (the spirit that you summon as a Driver). Raising the development level of the cities you encounter. Finding which Core Crystals suit you best, which accessories are prime for your character, how many discovery points are in a single zone, which scrap sets to sell after a successful salvage, et frigging cetera. None of these items are 100% mandatory other than “ get to the bloody story point,” but deciding to dip your toe into even one of these side missions sucks you in with the tenacity of energetic quicksand. I hadn’t even done the very first mission, which was to simply buy accessories, before I ended up getting pulled into THREE side quests. It’s bonkers how much there is to do.

Exploration wise, I imagine my second playthrough of Xenoblade Chronicles 2 would go much faster, but there are some places and areas that just open before you and never stop expanding. The first time I landed in Goligoth, I didn’t head to the main city for hours because I was just wandering around the plains, looking at all the monsters and animals that lived there, who would render on the fly and seemingly pop out of nowhere. That’s one small issue with XC2: with this game being as large as it is, the Switch can only draw so much at once and sometimes things will simply pop out of nowhere and surprise you. It’s never anything as bad as “I didn’t see that level 81 gorilla till he was on top of me,” but rather “this girl just appeared in the middle of the staircase like she’s been here the whole time.” It does make for some interesting moments when you realize the area is far more crowded than you first beheld, but, nonetheless, it’s a little jarring after coming from Mario Odyssey and everything being laid out in such a smooth manner.

I never really cared for the combat of XC2. At all. It’s an ATB style, but, rather than be static and locked, you can constantly move around the enemy, moving closer and further to either attempt to flee or grab items dropped. This gave the illusion that I could control my swings, which, obviously, I can’t. If you just played Breath of the Wild, you’ll be sorely disappointed that the most control you have is to trigger skills and do some QTE to activate stronger attacks from your Blade. It’s not all bad: once you get your party up to larger sizes, you can basically hide behind them, let them draw damage, then move behind a boss or larger leveled baddie to whack away without being directly in the path of danger. Your NPC party members generally know what they’re doing, so don’t worry as long as the enemy you’re fighting is within your level range (a couple above won’t be so bad). Keep an eye on your health, do some special moves when you can and pick up potions as they drop. It probably feels more involved than I’m describing, but it really didn’t for a fast majority of combat situations. 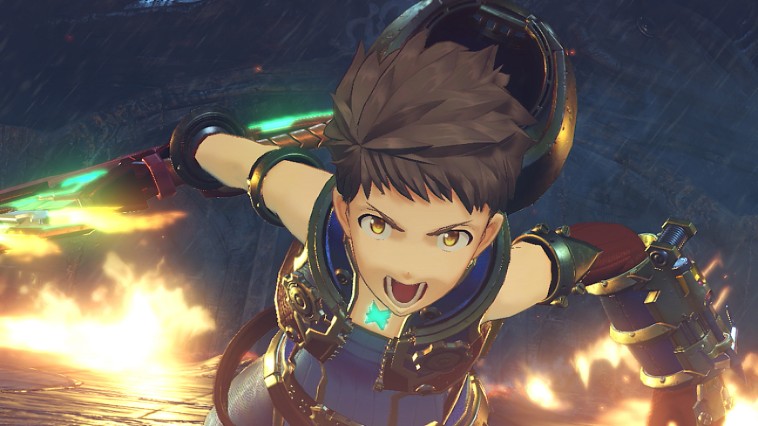 I did, however, get quite attached to the characters of Xenoblade Chronicles 2. Despite the incredibly anime setting and moments that occur (Nia in particular seems to fall into “cat girl” tropes), there’s a level of endearing and almost heartbreaking connection that occurs throughout. All issues of rendering and audio aside (you can balance in settings and Japanese VO is coming in a free DLC soon), this is a well written and thoughtful piece that really looks at the idea of home, and what comes of having no future and no real hope. Rex is a bit of a stereotype as far as a hero goes: he’s an orphan, he’s optimistic to a fault, and he’s got ambition and the need to save everyone from the drop. But the whole “fate of the world” motif is presented in a way that doesn’t feel hokey or trite. You’re not losing the people’s government to a shadowy king or stopping an asteroid from colliding with your planet, it’s the planet itself swallowing you whole. There are notes of faith, environmentalism and “planning for a future that you’ll never live to see.” If people fell in love with Shulk and Fiora, then the future fandom for Rex and Pyra/Mythra is going to be cataclysmic.

And that’s really what you need from a great RPG. People overlook flawed mechanics and graphical shortcomings as long as the game itself still spins an amazing adventure. Xenoblade Chronicles 2 is the first great leap forward on the Nintendo Switch as far as RPGs go, and this will be a fan favorite for years to come. From the first appearance of the Titans to the final views of Elysium’s fields, this will be a tale that will ring for years to come for fans of the genre. But, as I said up top, make sure to clear your calendar and cross other games off your wishlist: Xenoblade Chronicles 2 is slated to dominate the rest of your year and well into 2018.