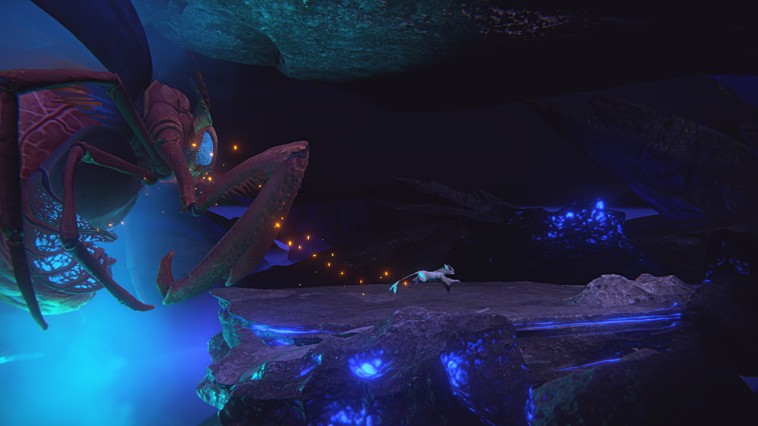 Ori and the Blind Forest was, and still is, a modern masterpiece. Combining amazing graphics with surprisingly difficult (but not impossible) level design, Ori stood out on multiple levels for both concept and presentation. The entirety of the plot is told through visual cues and the players needing to interpret what’s happening through wordless storytelling. Overall, it stands the test of the short time it’s been available, and the enhanced edition only made for an even sweeter experience. I bring Ori up now because, for better or for worse, Embers of Mirrim immediately evoked the same kind of idea, and the two games, despite being worlds apart, stack up in similar ways.

Mirrim is a feathered cat beast who lives on a planet that’s inhabited by a bunch of other cat beasts. The dark and light cats are always fighting, but then one day king cat foretells of a prophecy that the world will be destroyed by corrupt invaders or something and the fighting needs to stop ASAP. Two cat beasts, one dark and one light, then go out a-wandering, end up getting trapped together in a landslide of some kind, and then decide to use a combination of lost technology and the fusion dance to become one cat. So our hero for the entire game is actually an entity that shares two souls in a single body and may or may not be subject to constant existential torment. Neat.

Most of Embers of Mirrim plays out in an exceptionally pretty, side scrolling adventure that relies heavily on the puzzle element of both getting through areas (non-pressure) and boss/trial areas (high pressure). Mirrim, as two cat beasts in one, has the unique ability to turn into an Ember, which is a floaty ball of flame that can fly through the air, activate certain panels and also reach places that you can’t normally get to. And by an Ember, I mean Embers, because the dark and light sides both respectively create their own fire, and both sides need to eventually reach the desired destination before time runs out. Yea, you can turn into a flying pyre, but you burn out relatively quickly and Mirrim will re-appear wherever the furthest behind Ember was. This often results in your sacred beast either being hurled back to the start or re-appearing directly above spikes/evil baddies/water and then…well, starting the the puzzle over, but you died first. 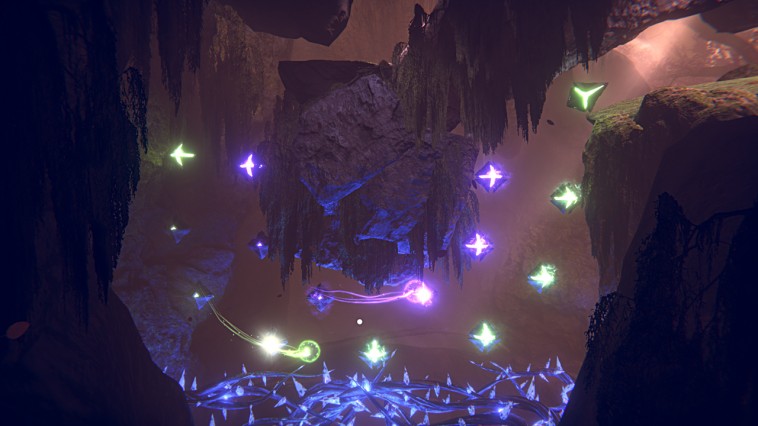 There is a lot to love about Embers. The art direction is pretty solid, and it’s clear there was a lot of thought from Creative Bytes about the world of Mirrim and how things should play out. The scenic overworld feels exactly like an untamed wilderness should, sprawling and endless, with plenty of natural-seeming divisions in territories and terrain. For some reason, the water doesn’t look particularly great, but that’s also something that is a very minor point and doesn’t need to be thought about after the first hour or so of gameplay. Once you pass a certain point, a vast majority of the game takes place in shadowy, cavernous lands that need your full attention, at least in terms of not misstepping I had to make sure the curtains were drawn so that the glare of outside light didn’t interfere. Then again, I’m glad I did because it allowed me to really see the detail that went into some of the stranger puzzles and level designs.

In the same vein of things, there is a bit of issue with the camera work. For a lot of the time, the player is at a good distance from Mirrim and can gauge what’s happening and where they are without too much difficulty. However, on more expansive puzzles and situations, I feel like the corporeal box around Mirrim was harder to guess in terms of relativity: that is to say, I couldn’t always get a good fix on where I was and was not. Right at the start, there’s a sequence of needing to leap over logs and platforms while on a moving slab of rock in a river, and I had to redo this several times. Not because it was too hard or because of breakneck timing, but because I found myself suddenly plunging into the icy waters due to me thinking there was more or less area to land than there actually was. This section was an absolute nightmare in handheld mode, so I spent an undue amount of time playing on the television, something I abhor when the Switch is so convenient for mobile gaming.

Running and jumping aside (executed fairly well), the inclusion of the Ember powers is both something interesting and, ironically, far, far easier on the Switch than on the PC. So you’re supposed to hold down a Z button to maintain the Ember form while also moving around with the joystick, and you can run out of Ember juice or simply separate too far from the other Ember, causing the game to vibrate angrily and slow you down more and more till you simply can’t stretch any further. So when you’re trying to navigate two sparks at once, through mirror image areas and you can only really look one place at a time, having your hands significantly further apart somehow made the disassociation easier. Also, being able to hand one Joycon to a friend and say “here, you’re purple now” makes the puzzles a damn breeze. They’re completely doable by a solo play (especially on easy difficulty), but handing off to other players on occasions that aren’t boss battles make it next to nothing. 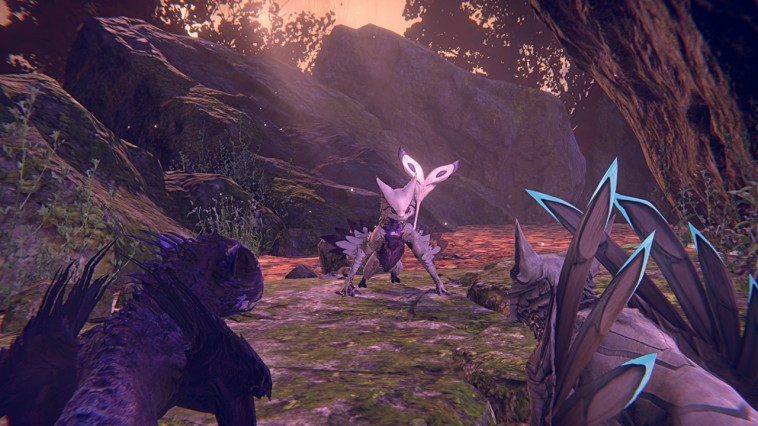 I suppose the biggest drawback of Embers of Mirrim is the length. There’s very little to explore in terms of side gaming (some hidden glyphs but that’s about it), and you can definitely knock out the game in fewer than four hours. It’s pretty, and it’s sometimes challenging, but it’s hard to imagine coming back after a relatively short run. By comparison, Ori, who we mentioned up top, is over twice as long on the main story and has a couple of hours of side stuff. Then again, Ori isn’t ever coming to the Nintendo Switch, so I suppose that’s not a fair comparison. Still, players have a tough time justifying price vs. time, and the length of a long movie isn’t always enough for gamers looking for a long weekend or even longer play.

Embers of Mirrim is unique and special, and it’s pretty enough to draw attention while being complex enough to maintain attention. It’s definitely a singular experience: a sequel would feel pretty cheap, and the best we could think of is a spiritual sequel with similar mechanics somewhere totally different. I would actually love to see an animated featurette that emcompasses everything that happens here, and I fully support the indie hunters to dive into this colorful situation. Just know there’s two sides to everything, and this critic is definitely leaning more towards the light.