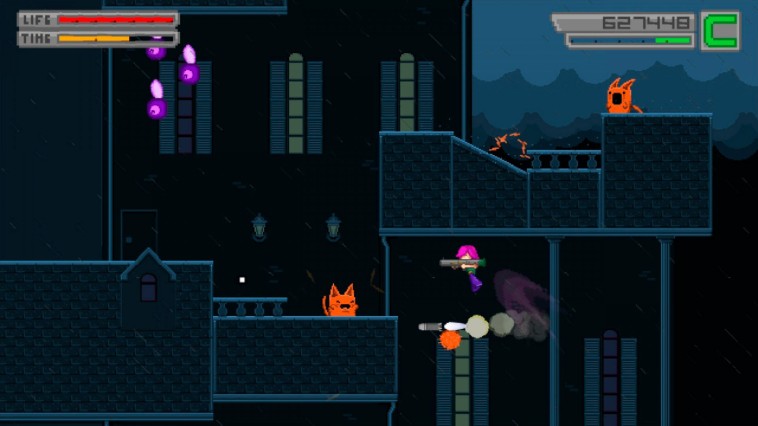 As the march towards the future for the Nintendo Switch carries on, we begin to really look at the library of growing 3rd party titles, especially of the indie variety, and keep a keener eye out for quality and interest. After all, these are not the Wild West days of just six months ago, when we were clamoring for literally anything to be released. There is a discerning taste being leveled for all new pieces of software that get introduced, especially if they’re already a bit long in the tooth on other platforms. So, I mean this with the nicest possible tone, you may need to think twice before picking up Bleed on the Switch, at least if you’ve played it before.

The concept of Bleed is fairly straightforward: you’re a colorful-haired heroine named Wryn who wants to become the greatest video game hero of all time. In order to do that, she channels her inner Chapman and goes off to kill all existing heroes in order to become the greatest. It’s very reminiscent of I Wanna Be The Guy, and the plot is far from the only angle that plays to this idea. Bleed is frigging HARD.

Coming at you as a 2D side scrolling platformer, Bleed has a lot going for it out the gate. There’s a variety of weapons that you unlock as you go along, and you’re going to want…all of them. You can only have a couple equipped at a time, but your faithful dual pistols should always be in one slot of choice. Additionally, Wryn can triple jump, and not just straight up in the air. Wryn‘s jump is a chaotic explosion that can go in any direction, resulting in some incredible moves and jukes in order to reach areas that might be a bit more difficult to access. And, lastly, Wryn has the ability to slow down time in limited quantities, which, believe it or not, is the real crux of this whole game. Far from Time Recoil’s manipulation that creates fantastic damage combos and never ending destruction, Wryn needs to slow down time simply to survive. Because, like I just said, this game is hard. 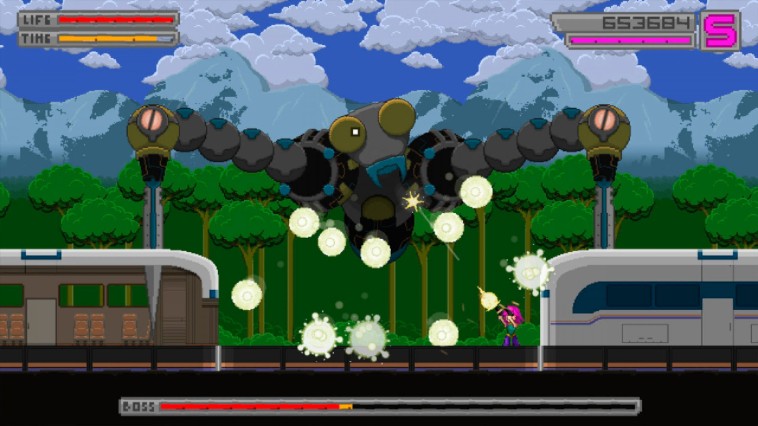 How hard is Bleed? Well, I put the game on easy and promptly died about twenty times just in the first level. And dying is a bit of a penalty that can reduce your score and the number of spendable points you get at the end of the level, and you want those points to get new weapons. This isn’t a one hit kills kind of game, either. There are just a ton of enemies, all of whom move and affect in different ways. Some simply want to slam into you. Some have projectiles all their own. And some are bastards who can swarm you in seconds without giving you much hope for survival. This is all happening while you’re also just trying to keep moving ahead to reach your goal, which, interestingly, isn’t that far away all things considered. But Bleed is designed for players who really want that brass ring of satisfaction when they complete a level.

Completion comes in the form of a couple boss fights per level, and Bleed has done a fantastic job of creating some memorable and interesting bosses through their pixel art design. Oh yea, this is high density pixel art (not quite Owlboy, but more than most), and it’s fantastic looking. Bleed uses the semi-dark comedy of the game to put in extra blood and gore, but it’s far from visceral and definitely banking towards cartoonish. The bosses tend to need several attempts in order to get past, because you quickly realize that you literally need to use every button at once in order to succeed. The bullet and projectile density isn’t enough to conquer by being quick on your feet, but, rather, combining the time manipulation with aptly targeted jumps. Plus you may need to be shooting at the same time. So doing all this, at the same time, and also trying to keep an eye on your health gauge, because a single slip up can reset all your hard work and make you throw your Switch for a surprising distance. 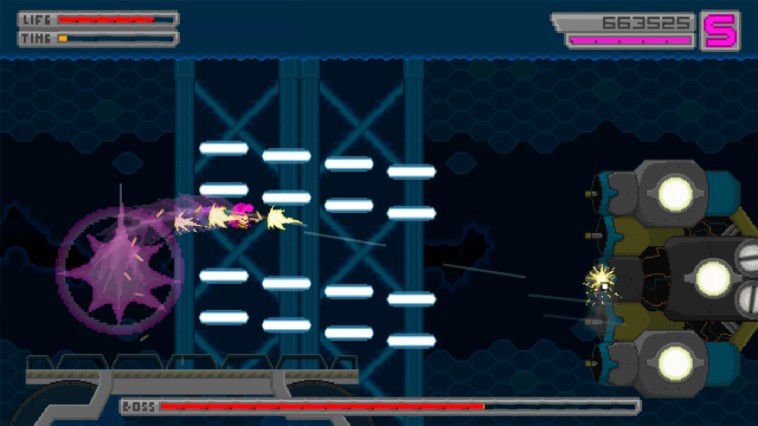 The only reason I say that Bleed could be a pass on the Switch is simply because it doesn’t bring anything new to the table. Don’t get me wrong, it’s a great use of twin stick platforming and it really stands out as unique, but it was also originally released in 2012. I think there’s this idea that, since a game did well several years ago, it can still hold a place on a modern machine because maybe some people have never played it. Where I run, the groups of people that I game with, Bleed is seriously old hat, and it does plenty well, but doesn’t necessarily have the best replay value. You can run through the same bosses again on a much more difficult situation, but that’s totally up to if you reach that kind of satisfaction. I didn’t feel that come through when I finished Bleed, just a sense of relief that I didn’t die more.

Then again, there’s no crime in having never played a game. I have yet to even attempt to play Red Dead Redemption, and I would lose my goddamn mind if it came to the Switch despite it being quite an aged title as well. So Bleed could have a great place in the library of some gamer looking to catch up on all they missed. It’s tight, it performs well, it looks great and it does have a lot of fun moments. But, and I can’t stress this enough, it’s hard, and you’d do well to respect that.