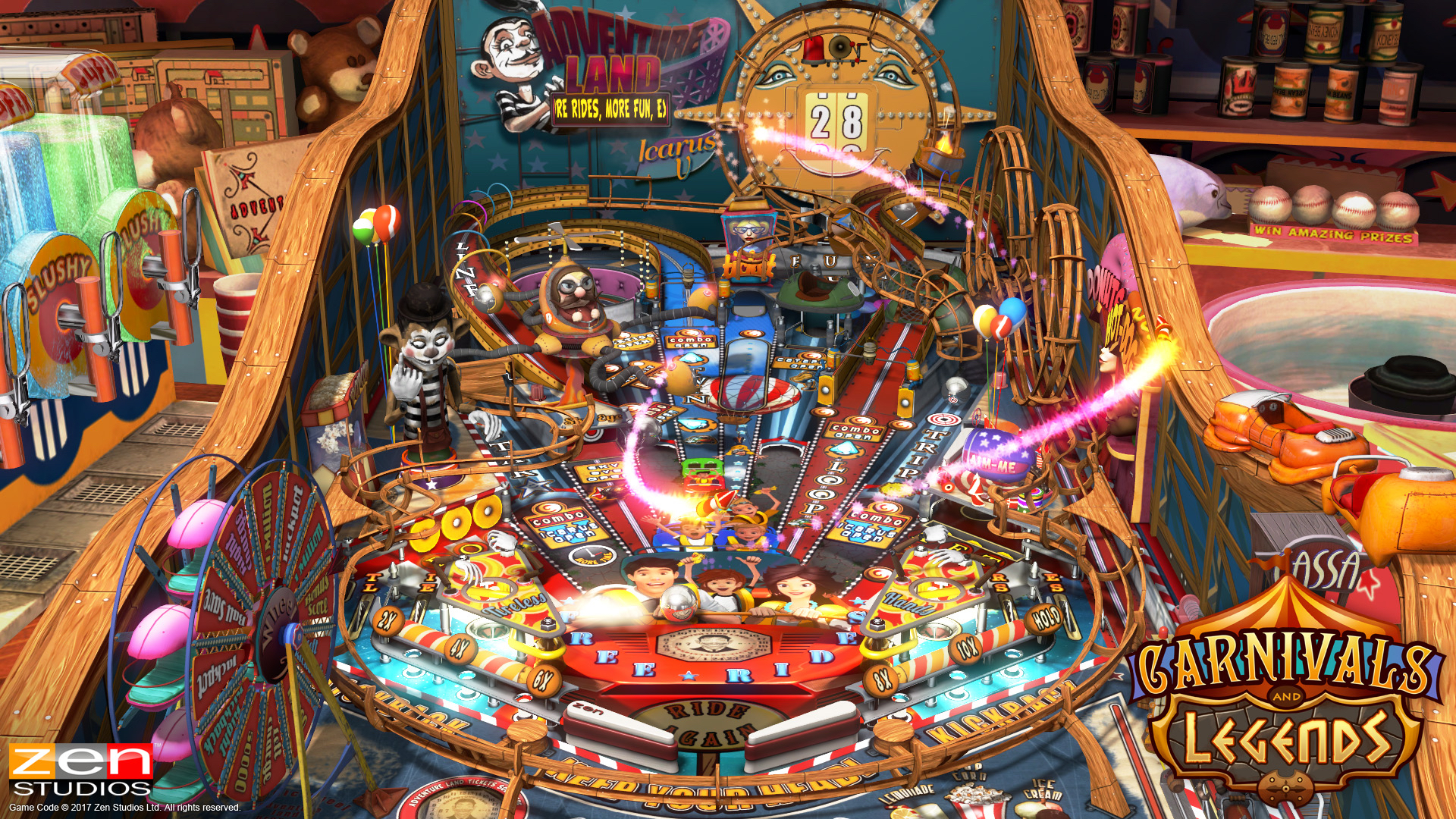 For those who aren’t aware, we’ve just unleashed a furious storm of pinball games onto the Nintendo Switch, so get ready, because I fully plan to review each and every table that gets thrown at me. Long before I could enjoy pinball in the comfort of my own home, I was playing tables at the laundromat and pizza parlors around my hometown, and, even now, still have plenty of fond memories. The World Cup Soccer machine from 1994 still stands out in my mind as one of the finest tables I’ve ever played, and I would be remiss if I didn’t admit to a little thrill from playing a Playboy table at the age of 12, like I was getting away with something dirty (my mom was not happy but couldn’t successfully argue against me playing pinball). Now, Zen Studios has launched their Pinball FX3, and, with it, a slew of new tables, with more promised on the way. The game comes with a single Sorcerer’s Lair table, but, if you’re fast, you can get the Carnivals and Legends pack for free as well (offer ends December 19th, 2017). Let’s take a look at these tables, shall we?

First and foremost, you should know that, even if you’ve played Pinball FX3 on another console/platform, the Switch could become the de facto place to enjoy these games. Not only has everything been updated to have more dynamic lighting and sound, but they have allowed players to put the Switch in vertical mode to play, which is really the best and only way to enjoy these tables on the go. Unhinging the Joycons and giving yourself the most amount of real estate while simultaneously freeing up your hands to rest a bit further from the screen perfects the  experience, and also lets you feel the rumble without needing to hear the rumble against the Switch. Seriously, is no one else bothered by the constant, loud hum that comes from serious feedback? It can’t just be me. Either way, Pinball FX3 is dedicated to making a ton of replay value for players, incorporating elements of traditional single player, advanced single player (high scores bring XP, which unlock new, permanent bonus multipliers), hotseat multiplayer (one ball per person, keep on passing) and challenge mode, which can unlock more bonuses and aesthetics. Keep in mind, if you’re determined to show off your pinball finesse, you’ll need to have a Zen Studios account, and then need to link that to your Nintendo account, because why should things be simple? In all seriousness, it only takes a moment to get setup, but it’s still a pain in the ass.

Anyways, let’s stop dissecting my own disdain for online registration and get into these tables. The Carnivals and Legends pack is a set of two, containing both Adventure Land and Son of Zeus. I can see why Zen Studios let these two go for free for a limited time, because I think they feature both the strengths and weaknesses of digital tables, and really shows what the team can do. It should be noted there are a ton of tables at the time of this writing already (thirty in all), so don’t let this single pack be your determining factor on whether you play this or not. Also, it’s free, so c’mon, at least try it. 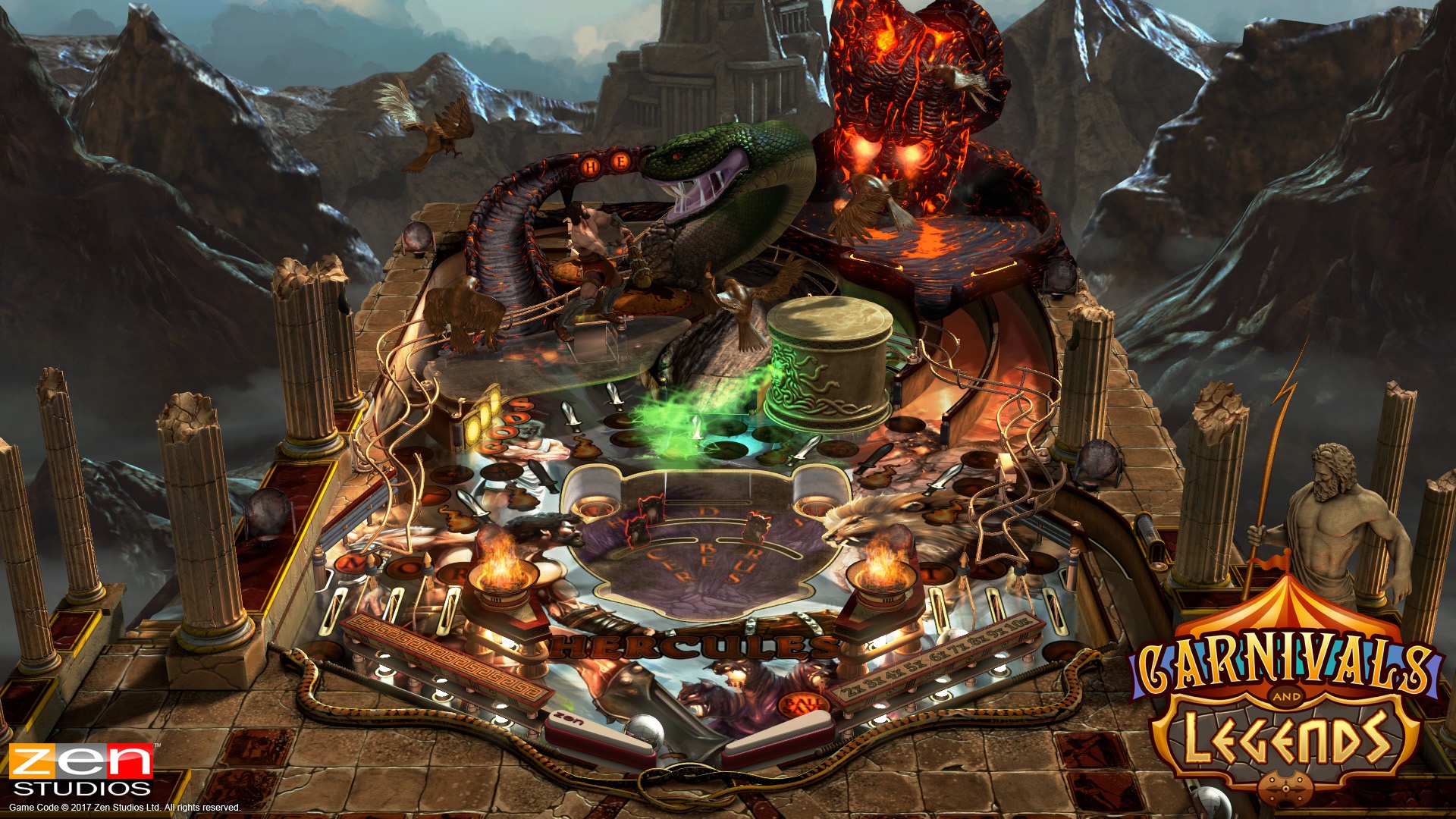 Adventure Land is far more akin to a very traditional carnival and circus setup than anything modern, and the details in the table also make it much more traditional than many you find in the Zen Studios wheelhouse. In fact, I would argue this table is one of the few that could easily be replicated into a physical table, with a couple of caveats. This is a full length table, meaning that it really eats up the screen size, and is built, top to bottom, with plenty of flashy lights and effects to give it that “midway” appeal. I say this to both give you an idea of the game but also to warn players, because these lights are bright and strong, and, honestly, gave me a little bit of a headache the first time I played it. The feedback from the Joycon rumbles coupled with the stabs of brightness when you hit certain bumpers was a bit overwhelming, but you do get used to it.

Most of the tracking ends up taking you on roller coasters, which lock and unlock on timed bumper hits and also allow for certain ball effects. When you really take off and get the multiplier going, you’ll end up with a flaming ball that impresses the “on fire” approach that they’re putting on the player. The responsiveness of the paddles is excellent, and I feel they’re the perfect amount of swat and elongation to make sure you can easily reach all the corners of the table without a ton of re-positioning and holding to get the timing right. Getting into the upper register at the right time also allows you to play random mini games, which, naturally, are designed line carnival games. From trying to get your ball to loop a certain number of times to firing a cannon into slot cars, it’s certainly whimsical, and I found myself enjoying a lot of the time I spent on the table.

The voice over work for Adventure Land was also great: the carnival barker let me know when certain events were happening, how close I was to activating new ones, and gave general encouragement when I inevitably lost the ball. This wasn’t an easy scoring table, either: things took a lot of repetition to really get the score up there, and more effort went into achievements than I had anticipated. Overall, since this is definitely a throwback table, I was quite satisfied, and would have happily picked up this table on its own.

Son of Zeus, interestingly, stands as almost a polar opposite of everything that Adventure Land represents. Far from being realistic, Son of Zeus is a decidedly squashed table, very heavy in shadowy aesthetics and presentation, with the table only feeling like it takes about half the screen in other to present everything. Based around the trials of Hercules, the player has to trigger events of his own physical prowess, like defeating a giant snake or conquering a volcano, however that works. Every action works on over-the-top graphics and effects that could have never been pulled off in normal conditions. The volcano itself becomes a mini table that you suddenly zoom in on and pull focus, and you can wrack up ridiculous points on a second of the table that, logistically, might be the size of a ham sandwich. Even the launcher is a statue of Zeus that sends your ball rocketing outwards with a blast of lightning. For some reason, I never did see anything like that back on the linoleum floor of Johnny’s Pizza. 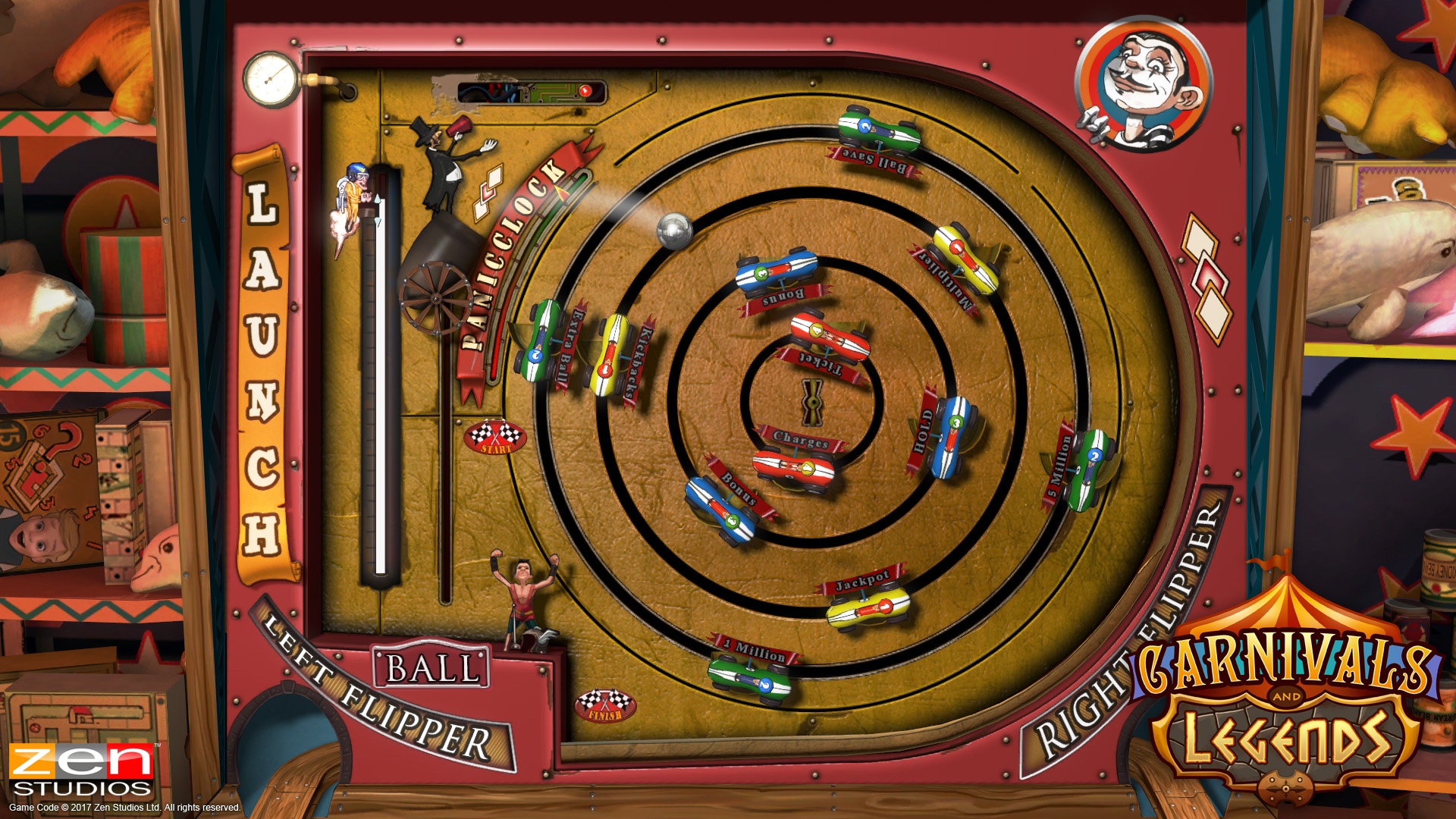 Speaking of points, Son of Zeus is definitely the go-to table for players who just want to rack up unbelievable high scores in the shortest amount of time. The bumpers and toggles paid out in incredible amounts, which is good, because you end up slamming into them quite a bit in an effort to reach the next area that Hercules demands you hurry up and reach. My God, the voice over from Hercules can be borderline overbearing at times, as his booming voice constantly refers to you as “stranger” and he laments and boasts in the exact same breath. I found myself getting annoyed with the Son of Zeus as I continued to try and help him slay the snake that was trying to eat him, or take down the green-energy spewing tower that suddenly shot out of the board. Once I activated multiball, there was a massive downpour of points coming from all angles, and I couldn’t even focus on what Hercules was saying.

But, once the smoke had cleared and I had finally run out of balls, Son of Zeus kicked out WAY more XP than Adventure Land did, and I had unlocked five perks to add versus the two that Adventure Land afforded me in the same playthrough. This must be the big tradeoff: Son of Zeus is smaller, but is faster to entice players to come back and play more in a super powered way. But, as a traditionalist, I really preferred Adventure Land over Son of Zeus, if only because it harkened back to real pinballing and not as much into the hyper powered idea of it.

All in all, both tables compliment each other well, and are a great showcase of what Zen Studios is offering with Pinball FX3. If you act fast, they’re absolutely worth the price of free and no one should have any excuse not to add them to their library of Switch titles. If you missed out, don’t worry: Sorcerer’s Lair is also decent, and the price for these two is still quite reasonable.