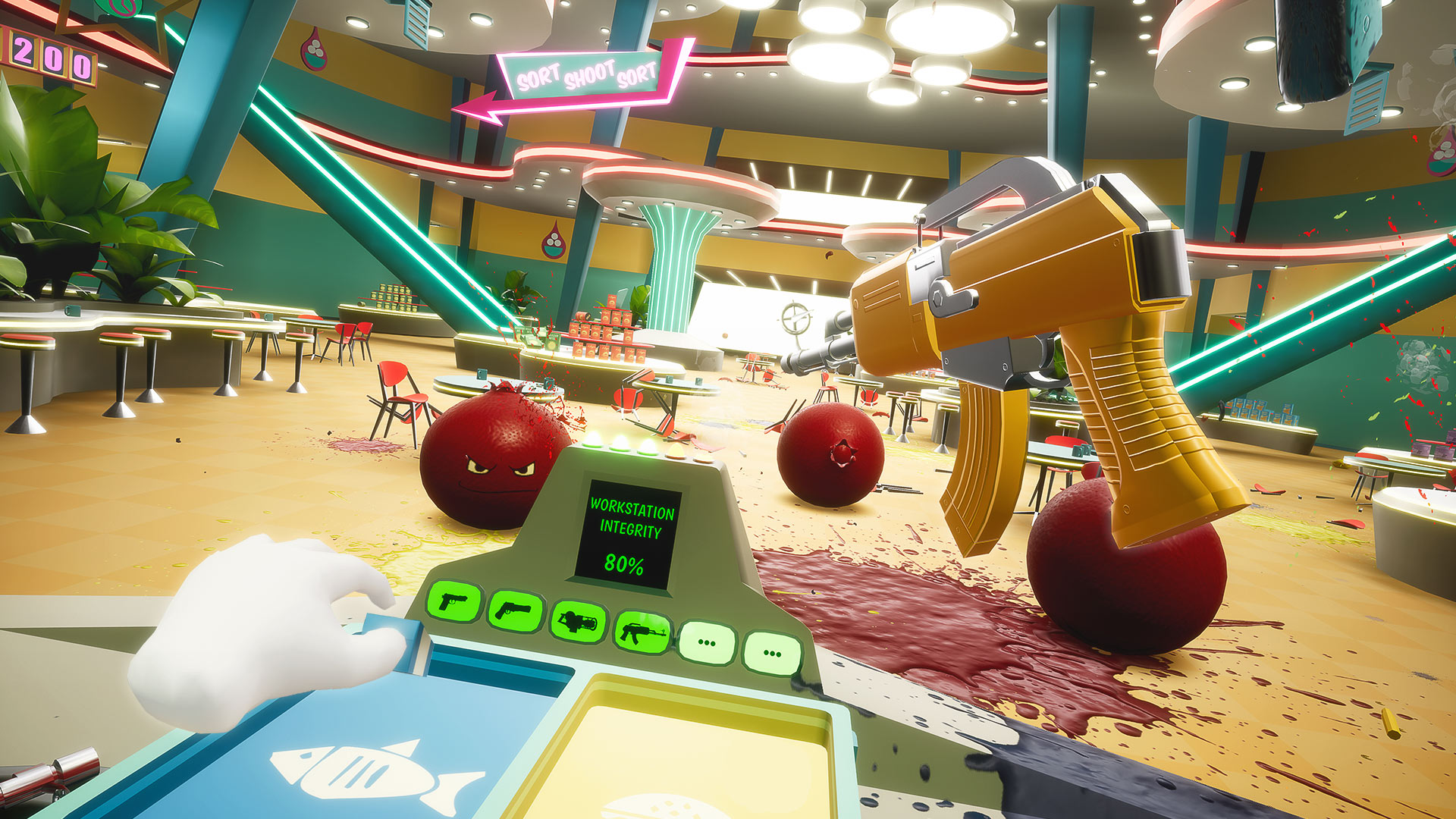 My last review of 2017 is a return to a familiar VR developer. NDreams have had a good year releasing 3 titles including this one, The Assembly and Perfect. I have had the opportunity to review them all and it’s quite clear NDreams have found a comfortably home in the VR world and their latest title Shooty Fruity, is as far from The Assembly as you could possibly get proving the developers are certainly not scared to mix its genres up a little.

The simplest way to describe Shooty Fruity is to mention it’s obvious similarity to Fruit Ninja, a game that throws fruit at you from every direction and expects you to dice and slice it. However, Shooty Fruity doesn’t throw fruit at you, it has the fruit attacking you.

The earlier training levels begin with the smaller (more relaxed) fruit heading your way from the various supermarket aisles including Berry’s, Grapes and apples, all with snarling teeth doing their best to reach your workstation. Luckily revolving around your head on a continuous rotating track are the various weapons you have gradually unlocked while doing your day job.

You see shooting attacking mutant fruit is not your only challenge as you are tasked with three very mundane jobs throughout the game. First are the checkouts which asks you to scan various items through your till and then place them on the correct conveyor belt. The second job is the food counter having you place coloured cubes on their matching coloured trays. And finally, you find yourself in the packing department requiring you to pick the correct items for packaging. These three are simple enough expecting nothing more from you except good hand and eye co-coordination, but when you start throwing in the constant onslaught of crazy meat eating fruit trying to reach your work space it makes those originally simple tasks very challenging. 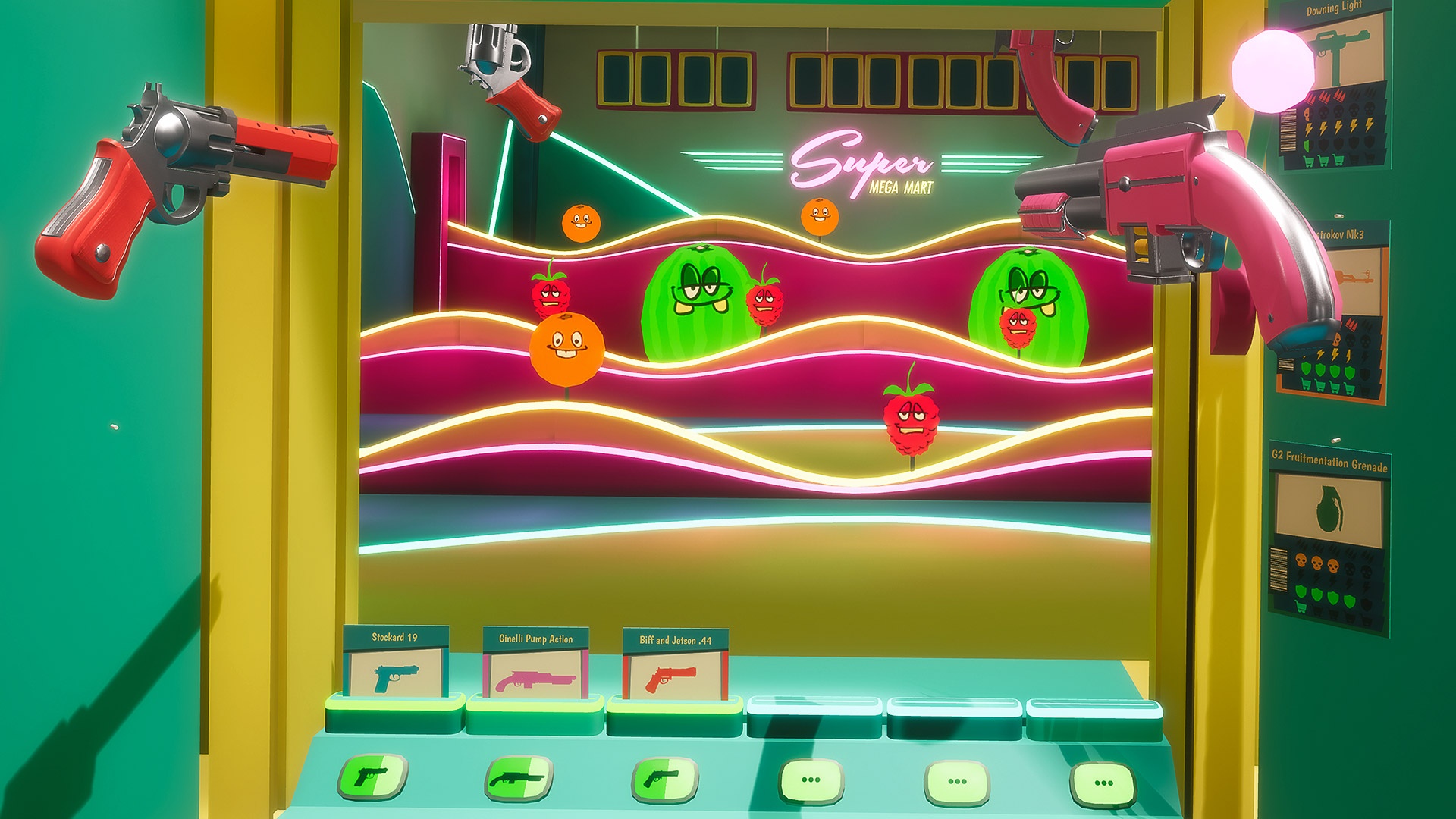 And to ignore or pay less attention to one of your roles will slow level progression considerably as both offer various upgrading possibility’s. Killing fruit awards fruit points used mainly to stock up your gun options at the start of each session via a simple load out. Scan, place or box with decent speed and accuracy and the guns you chose in the loadout will gradually appear on the rotating track above you.

Guns are varied ranging from pistols to shotguns up to a powerful Sub Machine Gun (an occasional grenade too) and all varieties are required at some specific point during the game because the fruit is clever and tough.

Some attack head on offering easy points (the Kamikaze fruit) these require no more than a squeeze from your pistol but as you progress further the fruit become more challenging coming at you from all angles with the larger fruits requiring a specific gun to halt its charge.

Most fruits make an appearance at some point throughout the game such as bananas flying like choppers looking to attack from height, strawberry’s stopping short only to bombarded you with their pips but for me the Blueberry’s and lemons were my arch enemy as the speed and quantity of their attack was just near impossible to defend.

But once you have played a few rounds you soon become accustom to all the fruits semi scripted attack patterns and adjust accordingly. Knowing what fruit you need to take out first and the ones you know you can leave for that split second more (slow attacking watermelon for instance) is the difference between a pass or fail. 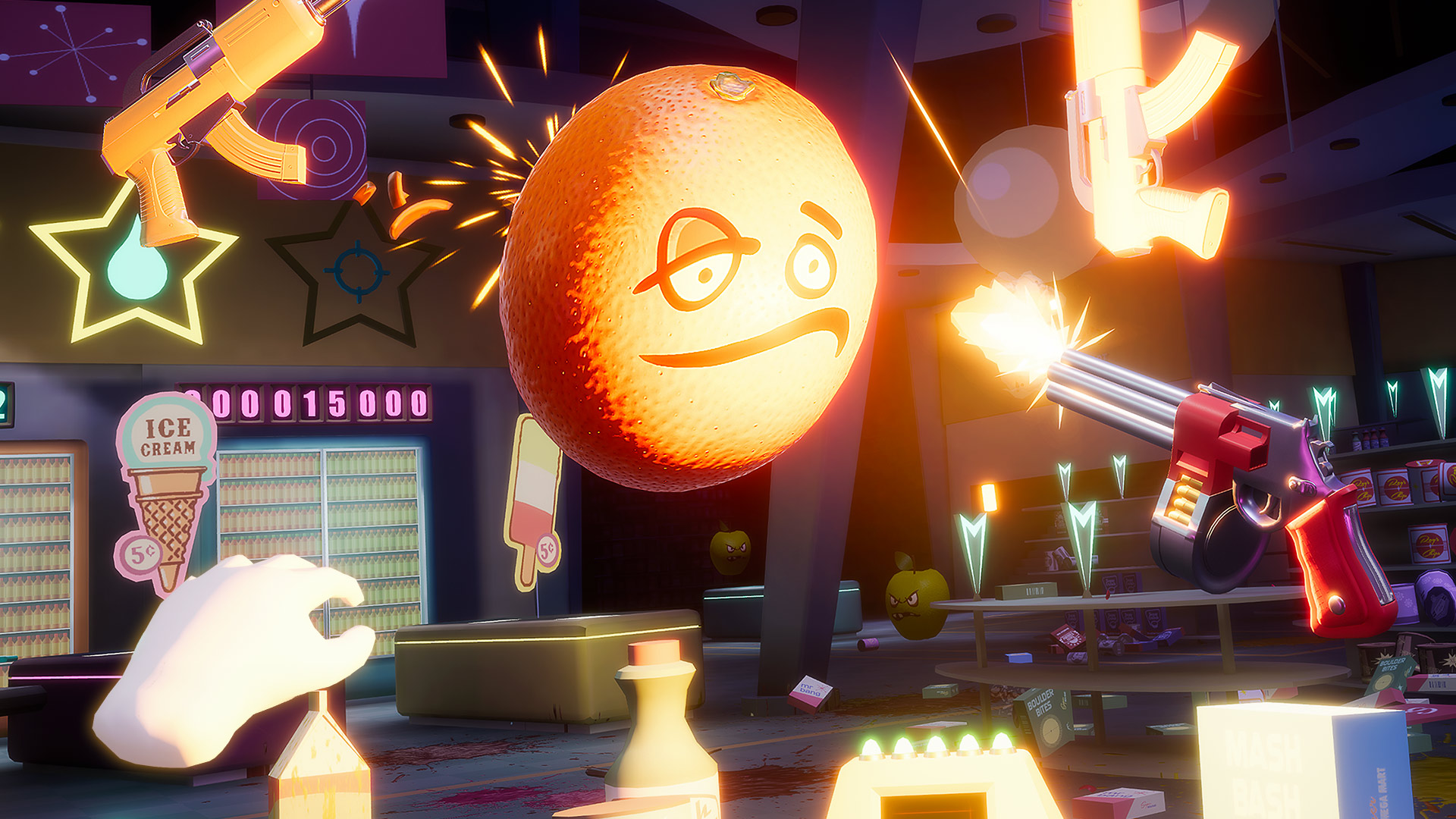 Shooty Fruity is a clever little VR title that requires multi-tasking for survival and really is a blast to play, especially when it gets hectic and gallons of fruit juice engulfs your view after a successful hit, (think of Rambo let loose in a supermarket).

But Shooty Fruity does have its negative points as the 24 levels can vary drastically in playtime with some finished in under three minutes while the other side of the spectrum you will find the marathon levels that have you sitting (or standing depending on your personal preference) for a full 30mins (in real time) which becomes somewhat uncomfortable and borders on tedium.

Another little criticism is the motion controller detection, initially it worked perfectly but over time and with more chaos on screen it seemed to intermittently miss-detect causing some frustration. This however could be my current VR set up and not a fault with the game.

Overall Shooty Fruity is a gallery shooting game with the added challenge of a job to carry out. With lovely bright and colourful graphics, excellent VR implementation (apart from the intermittent controller issue). A fun soundtrack of exploding fruit and beeping checkouts and level progression that challenges but never hinders, Shooty Fruity is another fun addition to the PSVR catalogue. I feel the asking price of £15.99 is a little on the steep side but the game is great fun and it also shows developer NDreams are becoming experienced and comfortable in making VR titles and I will eagerly await where they go next.