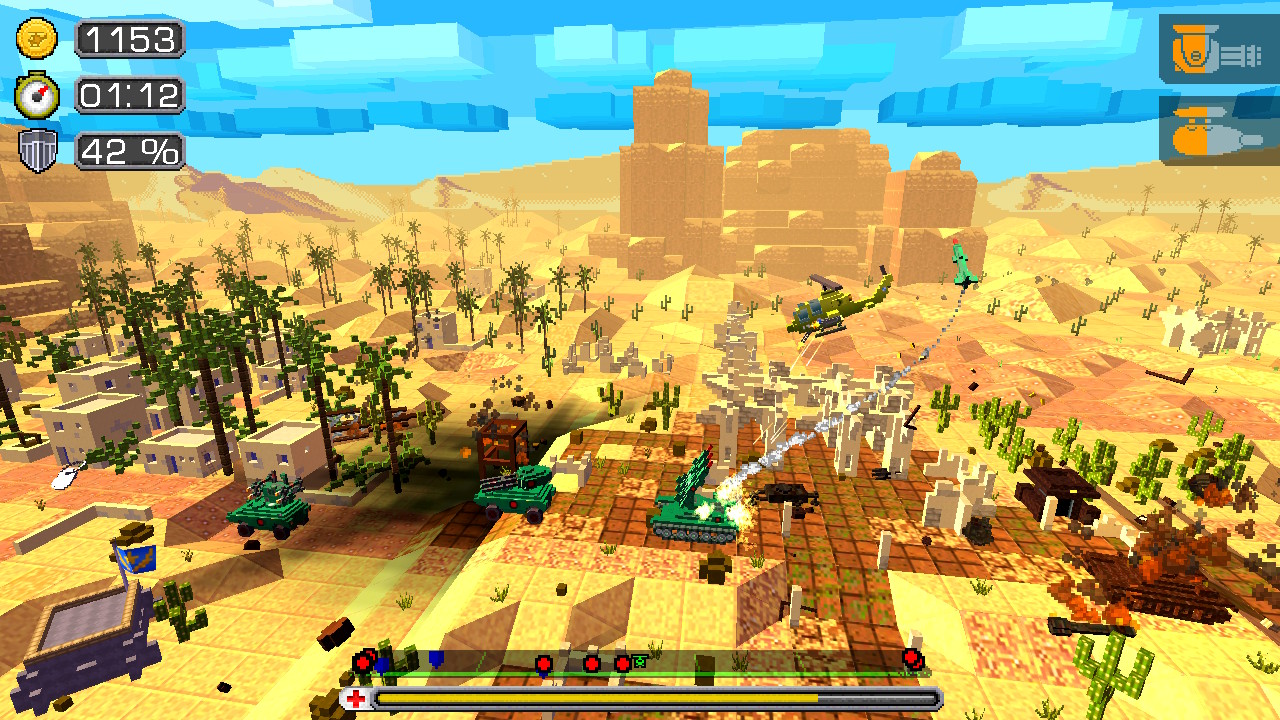 With its current growth in popularity, and the nature of its hybrid style, Nintendo’s Switch is beginning to see an influx of ports from the mobile gaming market. This isn’t necessarily a bad thing as it adds variety to the console’s library and also helps in attracting a wider audience. However, not all of these mobile ports are as successful as others. So where does Dustoff Heli Rescue 2, a mobile title developed by Invictus Games and published by Rainy Frog, fit in with this current trend? Will it have you riding with the Valkyries á la Apocalypse Now style, or will it simply be another port that fails to get off the ground?

Tasked as a helicopter pilot, Dustoff sees you flying across thirty five war zones that require you to rescue, supply, protect and support your troops on the ground, as well as providing reconnaissance missions. These levels also see you traversing across varying terrains that range from deserts, forests, through gorges and against snowstorms. In a style similar to the retro game Choplifter, you guide your chopper up, down, left or right along 2.5D landscapes that have the same graphical style as titles such as Minecraft and Portal Knights. However, these environments are beautifully detailed that run at 1080p docked and 720p in handheld mode. Trees and buildings stretch far and wide into the horizon for as far as the eye can see, clouds drift by as smoke billows from the chimneys below and other helicopters buzz around in the background as they each fulfil missions of their own; even the ground kicks back dust clouds as you skim over the terrain. There is simply so much going on that it really is a visual delight and oozes with a lot of love and attention from the developers.

You control your helicopter using the L and R shoulder buttons. Press them both together and you’ll rise vertically whilst releasing them sees you plummeting back down towards the ground. Pressing L and R respectively, guides you off in that particular direction. It feels like a strange control scheme at first but before you know it, you’ll be expertly flying your chopper around the toughest of war zones with ease. This is mainly due to the flight mechanics and the developers really capturing the look and feel of a manoeuvring helicopter.

You start the game with two choppers, one a heavy transport and the other an attack helicopter. However, as you complete various missions you unlock further varieties and despite the blocky nature of the graphic models, these choppers are easily identifiable with their real life counterparts. Each one also performs differently with the transports being slow and heavy, whilst the attack variety speed across the terrain with terrifying agility. Depending on how you perform each mission rewards you with stars, up to a total of three per level, and also gold coins which becomes an important asset as you progress through the game. 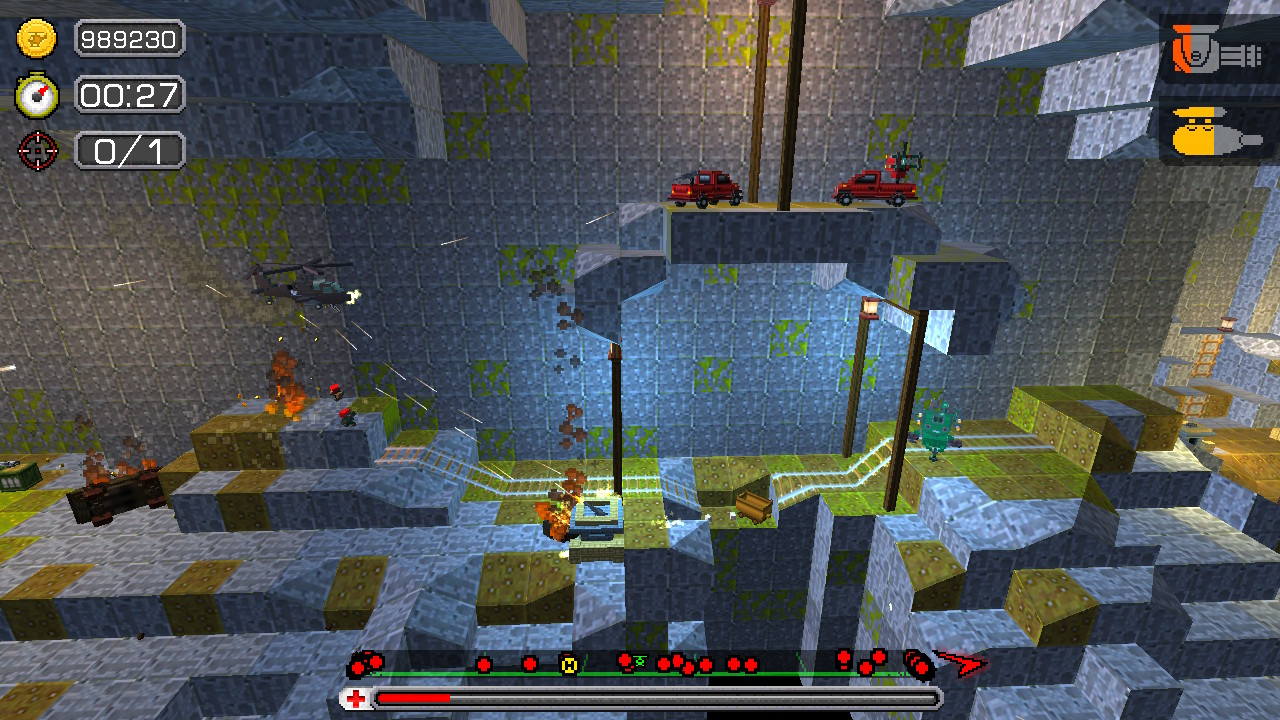 As you unlock other helicopters, nine of them in total, you then have the option to buy them; this is one of the elements that highlights the importance of coins. However, you also get the option to arm each chopper with rockets, Gatling guns and door mounted machine guns; another component for needing funds. You’re certainly going to need this firepower too, as each level is full of enemy fire all gunning to shoot you down. From truck mounted machine guns to surface-to-air missiles, the enemy will do everything they can to hurt you; and hurt you they will. Not to worry though, as situated within each zone are forward operating bases that can repair and re-arm you, they can even save your progress, at the cost of a few gold coins.

The combat elements of the game are performed automatically here. When you get within range of any enemy activity your chopper opens fire, however, you do get to control whether your weapon systems are active or not. This isn’t necessarily a bad thing as it allows you to concentrate more on the flying aspect of the gameplay and despite its automation, the combat is genuinely fun.

Also worthy of mention is the sound within the game. From the rousing military/action film soundtrack to the thump of the rotor blades, even the background noise of radio chatter and distant mortar shells. They all add to produce an air of excitement and atmosphere. It’s all very expertly done and just another testament to the love and care that has been put into this title.

Once completed, there is a lot of replay value. As well as trying to achieve a three star rating on each level, you can also collect dog tags that are scattered around each landscape. Each warzone contains a total of five dog tags which can be used to purchase three extra vehicles. Some of these tags are hidden in places which will require all of your piloting skills; especially when you are under heavy enemy fire. Even when you have exhausted everything that the game has to offer, this is still a title that can be played time and time again as it offers so much fun and is extremely polished. 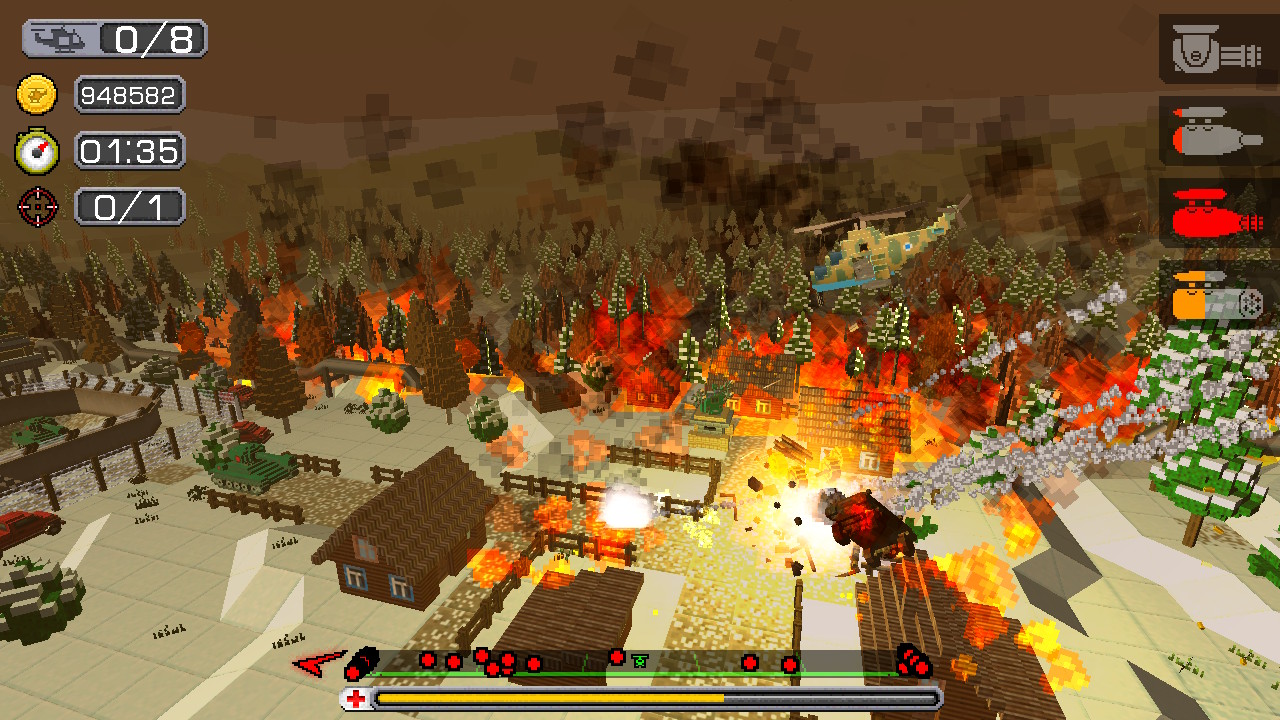 The HUD readings on the main screen provide you with all the information that you require. From a direction gauge at the bottom of the screen to your total number of coins, time limits and ammunition left at the top. They are positioned in a way that doesn’t detract you from the main action on-screen but are in such a way that you can easily keep track of your status with ease.

Despite this originally being a mobile game, there is no touchscreen support. This isn’t necessary though, as the controls are so tight that you won’t miss them. However, some menu selections can be a little slow to respond and the inclusion of touchscreen access here would have been welcome but this is by no means a game breaker.

Whether you’re a hardcore gamer or a casual one, there is a lot of fun to be had in this gem of a game. Everything about it is spot on from the graphics to the controls, the sound and its replay value. It has been crafted with so much attention that I simply can’t recommend this game enough. So, I’m off now to put on my Ride of the Valkyries CD and catch myself some down draft. DA, DA, DADA, DAA, DA.