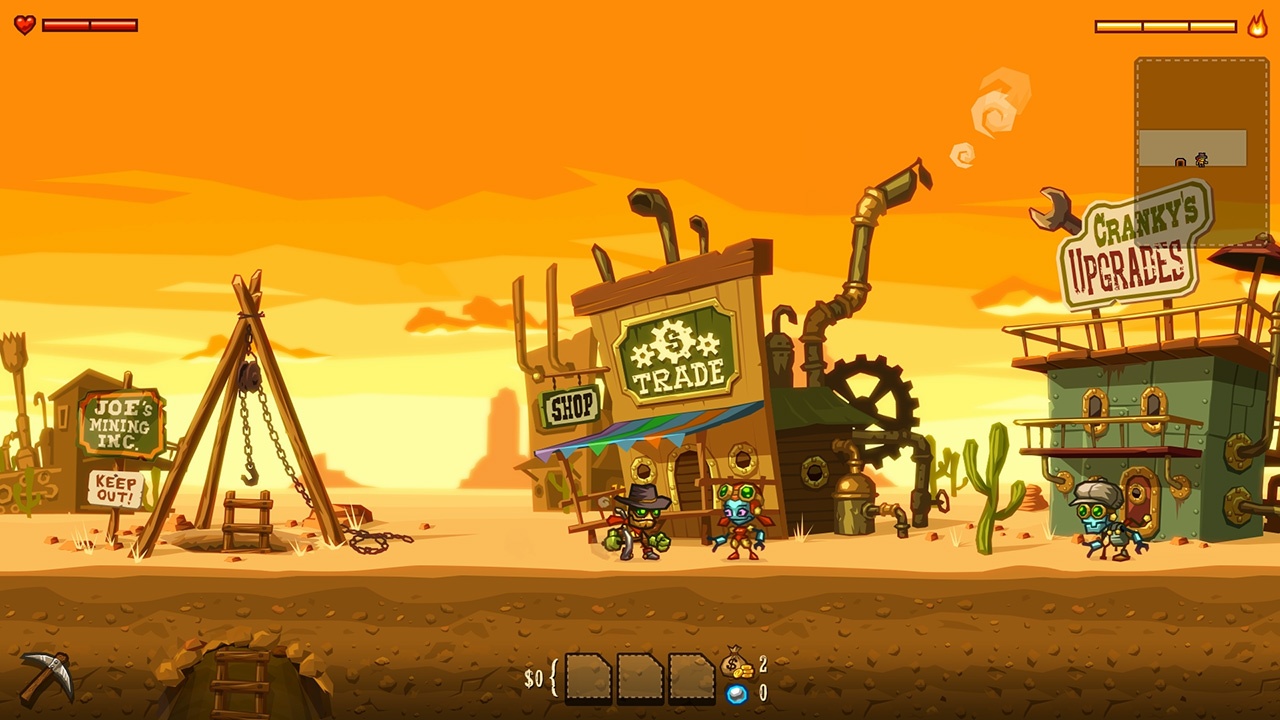 When Steamworld Dig 2 was released on the Switch last year, it was a huge step forward, in every aspect, for both the world of Steamworld and the creating company, Image & Form. Not only did it do a great job of improving upon the original, but it also filled in the gaps of everything the original was missing: more drive to the story, a more expansive area to explore, and better variety in the tools used for things like combat, exploration and general skullduggery. Image & Form, however, wanted to make sure that people were able to experience the entirety of the Steamworld Saga on one console, and, as a result, a trip back in time was needed. Thus, we return to our roots with the recent release of the original Steamworld Dig.

Steamworld Dig tells the tale of Rusty, a robot who returns to the dusty village of Tumbleton after receiving word that he’s inherited his Uncle Joe’s mine. Rusty is obviously cut out for this style of work, so I don’t exactly know why he ventured out in the first place, but it probably had to do with sand getting in one’s joints. In any case, the mine’s there, and Rusty needs to figure out what Joe was up to, because the townsfolk sure as hell can’t figure it out. It becomes apparent that Joe apparently was unearthing a ton of seemingly ancient and awesome technology, all of which is ironically perfect for further digging. Rusty, literally having nothing else to do as far as we can tell, decides to get into the thick of it and make Joe’s dreams come true.

The gameplay of Steamworld Dig is a fun and straightforward vertical, make-your-own platformer that is reliant on Rusty digging downwards, finding treasure and unearthing hidden rooms along the way. Starting with just a pickaxe, Rusty gradually upgrades his tools, eventually getting high powered items like a steam-assisted jump, a serious pneumatic jackhammer and, most importantly, a huge sack to hold all the gems he finds. For fans of the series, you’ll notice that things are, by and large, much simpler in terms of what you can buy and upgrade: Tumbleton doesn’t get very large in terms of this game, and it’s clear that it’s booming by the time Steamworld Dig 2 starts up. As a result, you can buy a few new things here and there, and make your bag bigger and your axe stronger, but there’s not a lot of cool options that can be toggled. 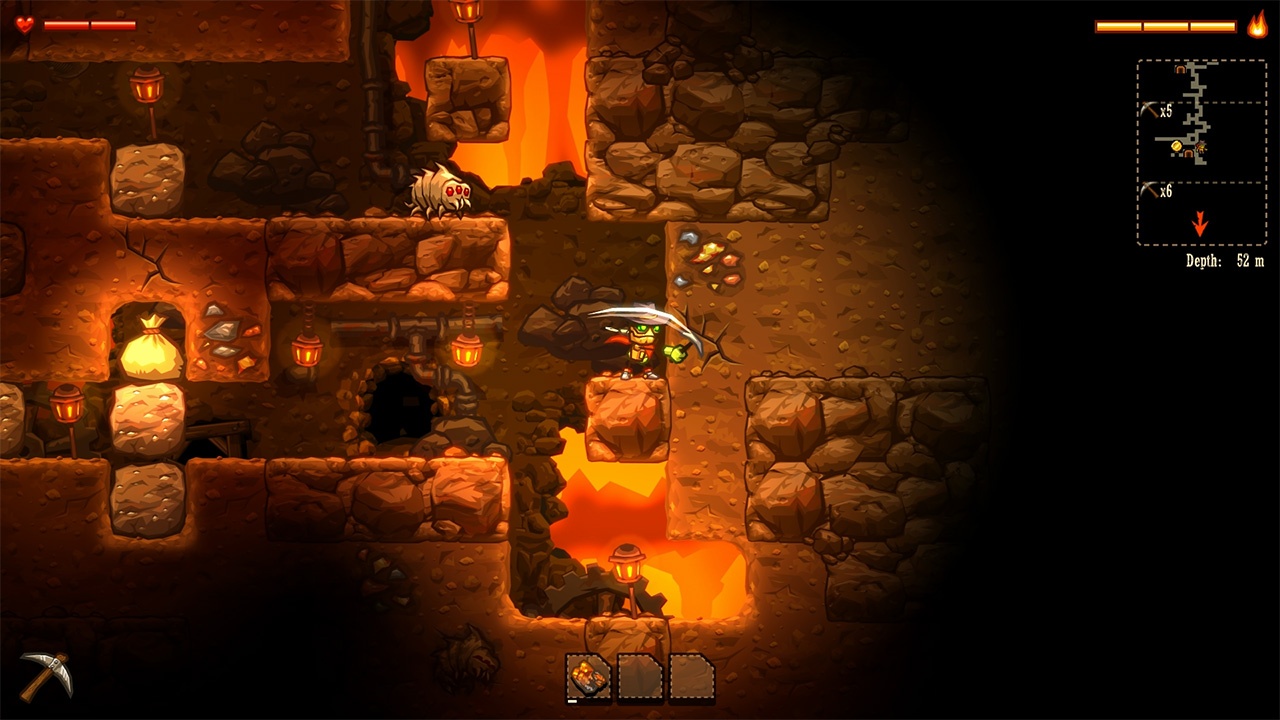 Steamworld Dig does a fantastic job of making the player feel in control and adept at what they’re doing by having a lot of caveats in place right from the beginning. First and foremost, Rusty’s ability to wall climb and to slow himself down by wall dragging make vertical tunnels not only possible, but also one of the most convenient ways to get from point A to point B. Since this is not a procedurally generated game, the placement of rooms and gemstones hasn’t varied in the slightest, and you can map out your course ahead of time if you’ve played before. Moreover, since mining is actually the primary focus on the entire adventure, you’ll find that you don’t need to dump as much time into figuring out the how and why of stuff: sure, there’s some big reveals and obviously a bit of a plot twist, but that’s almost incidental to the game of mining. Far from feeling like he’s saving anyone or anything, Rusty’s voyage is surprisingly lonely compared to what Dorothy sets out to accomplish in Steamworld Dig 2. There’s no quippy sidekick, no quests and ideas to seek out. Dorothy hopes to find Rusty, but Rusty finds a dead Uncle Joe within the first six seconds of the game. This entire journey down is just his own catharsis and also a bit of self-interest in terms of finding out what on earth is beneath the limestone and sand.

The simplicity of Steamworld Dig, however, is also a bit of its own undoing. The game is horrendously dark in many instances, and there isn’t a lot you can do about that. The lamp upgrades help to make visibility last longer, but doesn’t necessary expand your pool of light. Sure, when you jump into the different rooms and puzzle caverns the lighting is better, but it’s far from ideal, and straight tunneling, especially when you’re down to your last rectangle of light, is abhorrent. While Steamworld Dig 2 was generous with it’s recharges, the original is miserly and will let a player have to fight in order to get another scrap of flame or a health container. Not to mention Dorothy charges quite the premium to refill your health once you get back to the surface.

Additionally, once you unlock certain items (specifically the jackhammer) you really lose any and all need to keep getting gems and getting further riches. The level up mechanic is cool to reveal new stuff and motivate you in a Skinner sort of way, but anyone who plays it once will realize how unnecessary it is in terms of beating the game. Thankfully, there is incentive to get more and more unlocked in terms of giving you a better ending and a better overall percentage of the game. There is a little bit that’s left out of the beginning of Steamworld Dig 2, and learning it through the end of its predecessor makes for a better story overall. 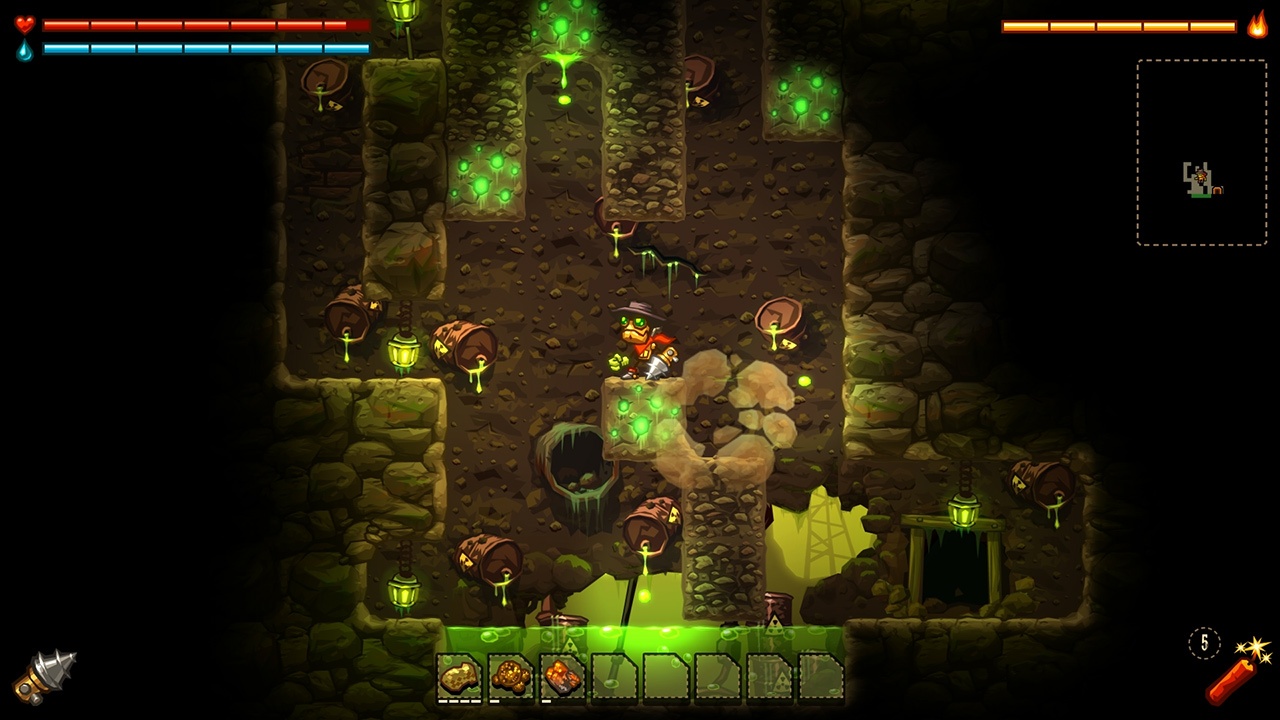 Also, holy crap the self-destruct mechanism is unfair. I think it was meant to be a kill switch if you accidentally went down the wrong path or dug yourself into a hole you can’t jump out of, but it’s also just a cheap teleport system to return to the surface and still maintain all your riches. I always forget that when I, too, blow up, I respawn in the same clothes I was wearing, right down to the exact change in my pockets. It helps to remember that Steamworld Dig was originally released for the 3DS and, as such, probably wanted to make sure players didn’t straight up hate it or lose all their progress when the battery was taking a hit. That being said, it’s still wonky and borderline ludicrous how simple it is to game the system.

Steamworld Dig is an unusual release for the Switch, simply because there isn’t anything about it that appears changed, upgraded or sweetened for its Switch release. Sure, the price is nice, and the game itself is fun, but there’s odd timing in the whole ordeal. Mapping some buttons to the C buttons feels odd, and it’s almost like watching the 1960’s version of Ocean’s Eleven: sure, you respect and honor the people involved, and there’s a small bit of enjoyment, but the remake is better on almost every level. That’s where I sit with Steamworld Dig: number new has been around for months now, has a ton to offer in terms of replay and engagement, and has secrets, excitement and a lot of knowledge that it brought over from criticism of the first.

If you are a fan of the Steamworld Universe and are secretly hoping for Heist to be ported (or a new installment to the franchise), then maybe Steamworld Dig is worth your investment. It’s hardly a bad game, and is actually quite enjoyable (one of my all time favorite 3DS titles). It might be hard sell for fans of the sequel, but, if you gotta have the set on your Switch, you’re not wasting money.

This gaming artifact has just been unearthed on the Switch, and, while the original is still a treasure, it just doesn’t gleam as brightly as the sequel.