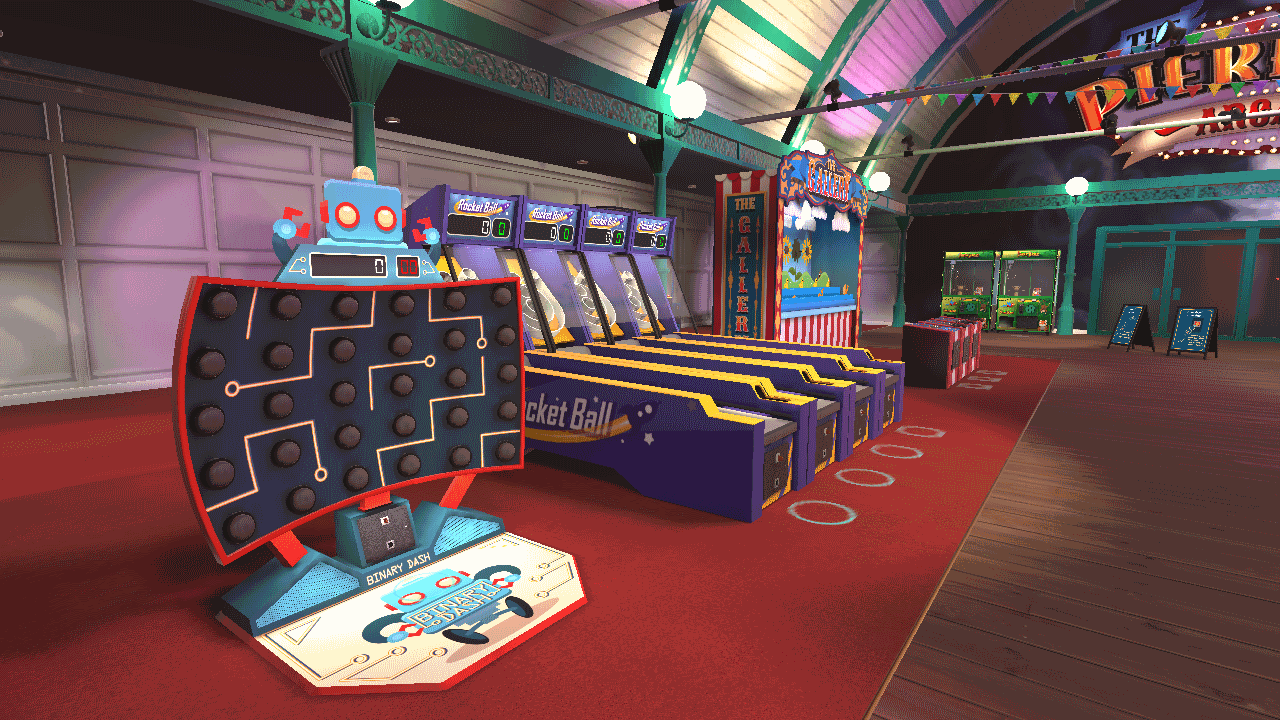 Pierhead PSVR is an exact replica of what you used to find at (surprisingly enough) the end of many piers around the UK coastline during the 80’s and 90’s. It’s such a good duplicate it even has the crappy non-health and safety toys you could (and wanted) to win back in them days. But I must say developer Mechabit has done a great job in recreating the visual aspect and have captured the sounds of the arcade machines perfectly. In fact, the only thing missing is the sweet smell of popcorn, toffee apples and candy floss.

Once you have admired your well realised surroundings you have 15 games of varying kinds to choose from. These range from ten pin bowling, claw crane machine’s through to zombie and duck shoots. All the games look and sound as they did (Or still do) and the nostalgia of my many visits to the Margate seafront in the early 80s just flooded back.

Moving to your choice of game is done via the teleportation system using the move controllers (unfortunately no Dualshock4 compatibility), this has always been an aspect of VR I have never liked and felt moving in this way removes a little of the 4th wall element you want from a VR game but once you are in front of you chosen arcade machine the VR aspect really kicks in. Even the simple act of starting a game involves some player participation as you must insert a coin and press start on the machine to play. 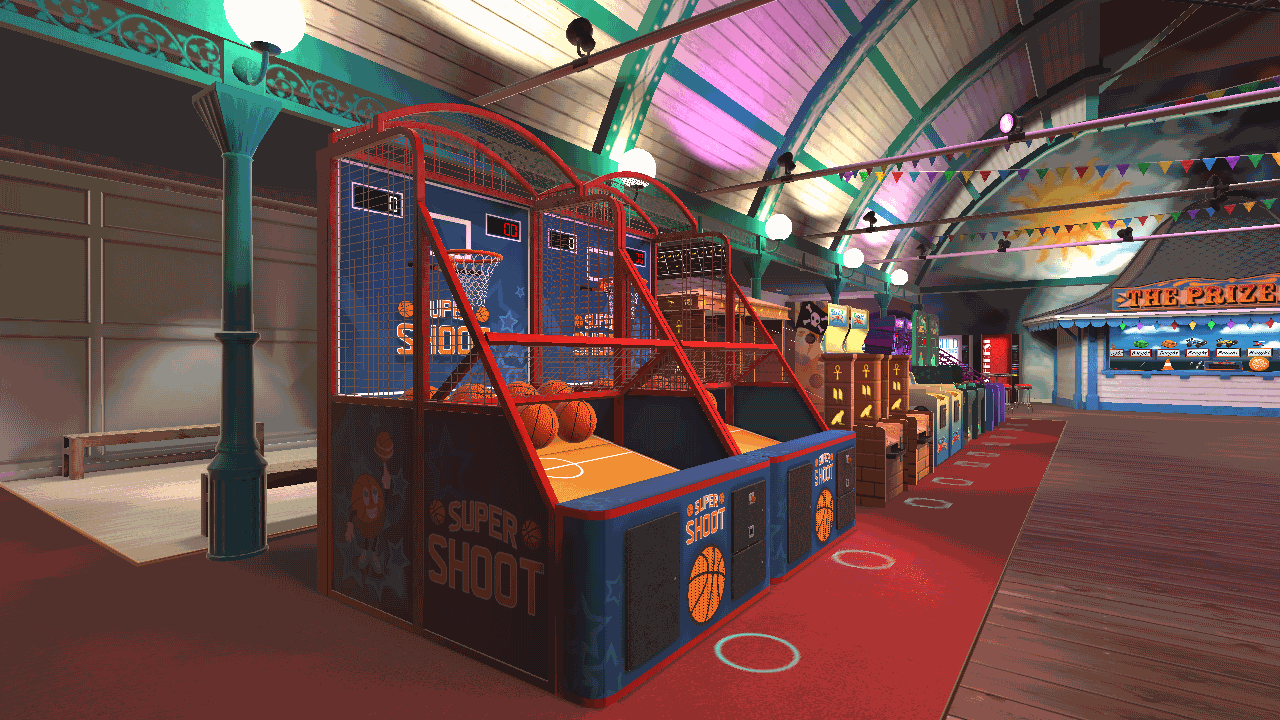 Visually all the games offered are well presented and all play exceptionally well with no motion sickness or controller issue’s (apart from one I will mention later) but this is probably down to the simplistic nature of the gameplay with most of the machines only requiring two buttons to be pressed.  Take for instance the claw crane machine, this requires you to press a button for forward and a second for moving sideways before the claw lowers to hopefully grab your chosen soft toy and anyone who has played these types of machines will know winning something is as possible as winning the euro lottery. But luckily this one seems to be a lot more honest and if the claw does grab a toy it doesn’t drop it half way over to the prize draw, this has kept my 7 year old happy even if he still doesn’t get a toy.

The variety of games on offer is the biggest positive aspect of Pierhead because you never get bored, you just move on to the next game. Boxing is by far the most strenuous of the lot requiring full punches at the highlighted pad with the latter levels requiring both speed and concentration, just make sure nobody wanders in front while you’re playing. Other simpler games include basketball, Dino whack (think whack-a-mole), Scarab toss requires you to get golden balls into a vase and Arctic shuffle involves simply sliding a puck down a smooth surface with target areas to stop it on.

The harder games involve good hand eye coordination like Comet drop or Binary dash (don’t worry you may not recognise some of the games by name but you will know them when you see them). But by far the most challenging must be Zombie shootout, it’s a simple point and shoot game but it requires you to manually reload your gun which is where the challenge comes in. With this particular game there happens to be some minor issues with tracking and I found myself constantly grabbing the barrel of the gun instead of reloading it, ending many high scores attempts prematurely. 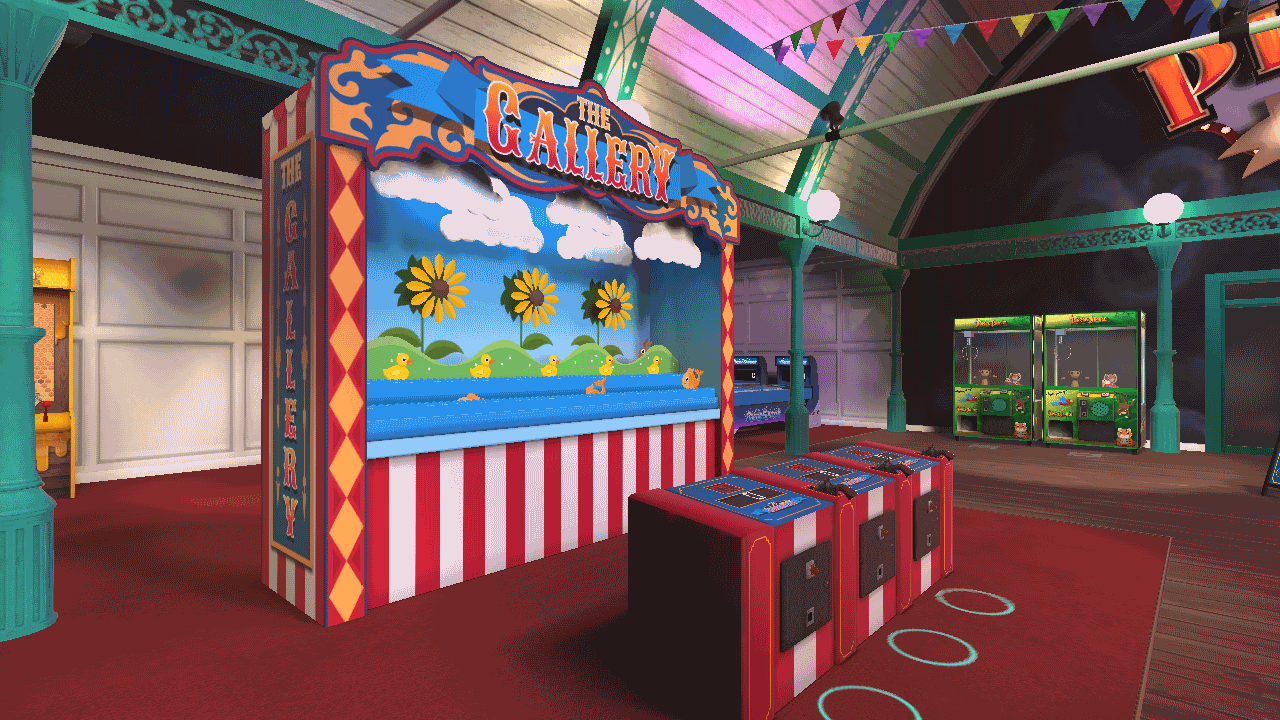 Another great addition to Pierhead Arcade is the fact you can use your points earned from the various games at the prize stall. Most of the prizes offered you can see at a fair or arcade now, the high scoring prizes include a remote-control car or drone that you can actually play with and towards the lower end, a boomerang or pop and catch toy. It also has some unexpected prizes like a selection of fireworks that can be lit using another prize – a Zippo lighter and then thrown.

Overall Pierhead arcade manages to achieve a lot for such a simple title. It has nailed the feel of being in an old-style arcade with its impressive visuals and machine sounds, even if it does lack some of the other external sounds you would expect to hear. It offers a great selection of games which have all been carefully re-created to immerse you into the VR world all with varying difficulties and challenges. Adding to this the ability to spend your points won on virtual prizes and you have a perfect simple VR game that offers limitless replays (especially if you’re a trophy hunter with 52 in total) and has certainly become a favourite in my household. Cheap (£11.99), simple yet great fun and it just go to prove you don’t have to spend millions on developing a game to achieve that 4th wall experience.